I’m not one to write this kind of letter very often, but you are a special company. There’s something I feel I need to say. Something I feel is important.

When I saw that you released your latest experience, Human Resource Machine, I purchased it blind, without even reading the reviews, something I rarely do. But how could I not? I’ve grown up with your toys since the times of Fisty’s Gem Pop, My Childhood: The Game, and Little Inferno Entertainment Fireplace. I still remember when I met Miss Nancy and she taught me to “dream bigger” before flying off in a rocket to chase her own dreams. I met some of my best friends thanks to Little Inferno. I still keep in touch with Sugar Plumps to this day, although it gets harder and harder to find the time to write her letters, and I haven’t heard back from her in a few years. So maybe you understand the kind of hopes I had when I first selected my employee ID and started working in your imposing skyscraper.

It’s common wisdom, when writing this kind of thing, to try to evaluate experiences for what they are, not for what you expect or want them to be. And there’s a degree of truth to that, for sure. But I want to be honest here, and my relationship with Human Resource Machine was inevitably affected by my expectations and past experiences with your other toys, in ways that I can’t ignore. I hope someone else writes about HRM without also mentioning Little Inferno in the same sentence, because you don’t deserve to constantly be compared to the ghost of your past. But I’m not the one who can do that.

I started working, and this time it wasn’t work disguised as play, it was literally just work. The only reason it was enjoyable and interesting was the deep disconnect between my body inside the office and my rationality, looking at myself as if from above. This is palpable from the very first level. My body was running around, toiling, sweating, and carrying information. “Most people stress out before making it this far,” my supervisor told me on the second level. I believe him; maybe stressing out is the proper response. But I wasn’t stressing out, because I wasn’t really there. I was outside, up in the air, looking down and doing interesting intellectual work: I was programming myself, giving my body instructions in the most efficient way possible. I was playing a puzzle game. 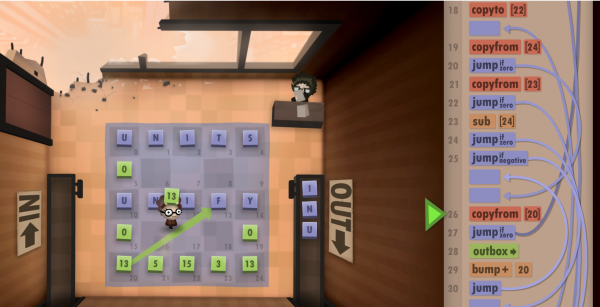 Here already I see the first major difference between HRM and LI: in Little Inferno the combos you needed to complete to progress were imaginative associations of ideas and wordplays. In HRM, what you had me solve were cold, rational logic puzzles. And I’m not saying you should have just replicated LI in all its aspects; that’s not why I’m constantly comparing the two. I guess the significance of this difference will make itself clear in the following paragraphs. For now what I can say is that it feels a lot less like play and a lot more like work. Appropriately so: HRM isn’t a toy like LI. It doesn’t have pretty lights and children cheering you on when you progress. HRM is a job. An interesting job, if you can look at it from a safe vantage point, but still just a job.

And then you started evaluating me, which is something you’ve never done before. You didn’t just want the problem to be solved, you wanted it solved as quickly and efficiently as possible. From a certain point of view, it was an interesting challenge, but on the other hand, it felt… meaningless. Like my supervisors’ smiles. “Positive attitudes were determined to increase productivity, and are now therefore mandatory. Smile! Management is watching.” 42 years I worked in there, and I still don’t know what our productivity was aimed at. What were we actually doing, as a company, in that skyscraper?

I persevered. I kept watching my body moving around, carrying letters and numbers that never added up to anything meaningful, executing the orders I had set for it for no purpose other than because someone else said I should. Sometimes, for brief moments, I remembered how that was still my body, and I felt sorry for the menial tasks you had given me— worse, the tasks you made me give it. I felt sorry that you made me objectify it so. I became nothing more than a computer processor, long before the end, when you made that explicitly clear by calling me “instruction follower” and replacing me with a literal computer. Yes, I understand that was the point. The entire game is a textbook example of Marxist alienation, where even your own self-improvement is not for yourself, it’s only to be a more efficient worker. You only become a better slave for your master.

I persevered, because I was waiting for something. And that something… never really came. 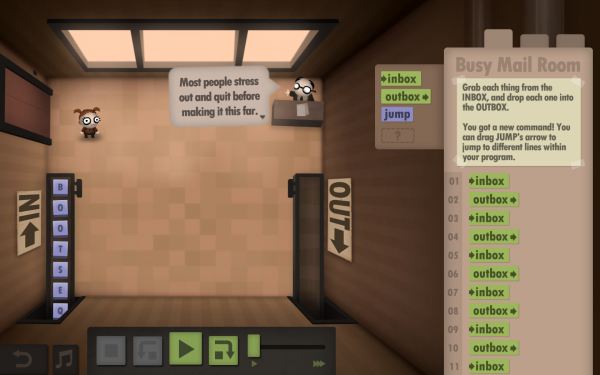 In HRM, I was waiting for something to subvert everything you had set up. I was waiting for a Sugar Plumps to appear and wake me up. To tell me that yes, solving a problem using Fibonacci is fascinating, but it really acquires value only when you can then use that solution to do good in the real world. Maybe I was waiting for someone who had not yet lost her warmth, her vitality, and her curiosity, to come and save me from that skyscraper, to bring my vision back down to earth and shatter my disconnect, my alienation.

I waited, and I grew older. 42 years I waited. 42 floors I climbed. My hair turned white and my face became a mask of wrinkles. One day a colleague of mine must have realized what was going on, what her life had become. She lost hope around the 33rd floor and killed herself by jumping off the skyscraper.  “Most people stress out before making it this far.” Maybe that’s what he meant, back on the second floor. Most people, not most computers.

We didn’t even observe a minute of silence for her. I kept progressing, faithfully, because I didn’t want to believe it. I climbed the skyscraper, one floor at a time. I got closer and closer to the end, and still I believed something would happen. Maybe on the next floor. Maybe on the next floor. But nobody ever came. There is no Sugar Plumps in the world of HRM any longer. There is not even a Miss Nancy. Everybody is disillusioned and disconnected, everybody is already a machine. An instruction follower. 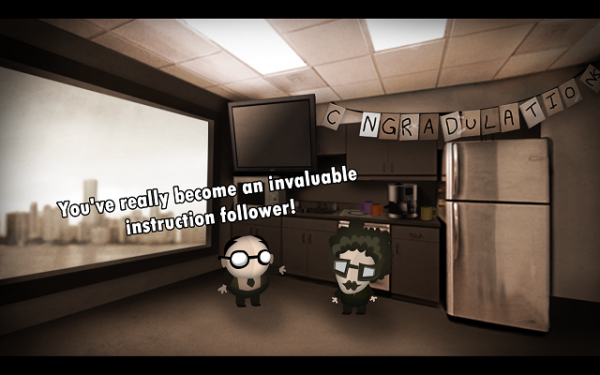 On the last floor my two supervisors spoke to me with their artificial voices, a staggering contrast from the still-human voices of my co-workers. They fired me and replaced me with a computer. I do wonder who is going to program the computer if I’m not there. But it’s not my problem anymore.

I went outside, for the first time in 42 years of nothing but work. I went outside, and I caught a glimpse of what the news channel— the one we all ignored during the coffee breaks— was talking about. An army of machines had successfully invaded the city. I saw a boy and a girl from the resistance fighting a giant robot. I wondered if my experience with programming could help the humans win the fight against the machines. But it was just a quick thought before I decided to head home.

And here I am. I came home and started thinking again. Thinking for myself after 42 years of following instructions. On the penultimate floor, my supervisor said, “I don’t think I was ever a kid. Were you?” But now that I think about it, I think I was. I was a kid: short, and looking up at things from below. And I grew up with you, with Tomorrow Corporation’s toys.

I’m writing this letter because I have questions about the experience you offered me. Honestly: I was disappointed, but not because it was poor or unpolished. Had it come from anybody else, I’d have taken it as it is, as an OK puzzle game, an enjoyable but ultimately forgettable pastime. I’d have moved on. But the precedent of Little Inferno is not something I can easily shrug off.

HRM is like an LI in which your house never burns down, in which Sugar Plumps never writes, in which you don’t get to explore the world outside the fireplace. And even aside from the comparison, it’s obvious you wanted this to be something more. There are so many hints scattered around of a bigger world outside the office, occasionally intruding into the workspace itself. You’d have removed them if you didn’t want me to see them, to think about them, and my work would have been just fine. I’d have kept living as an unambitious programmer and puzzle-solver. But you left them there— maybe you put them there— and never let me explore what was outside. 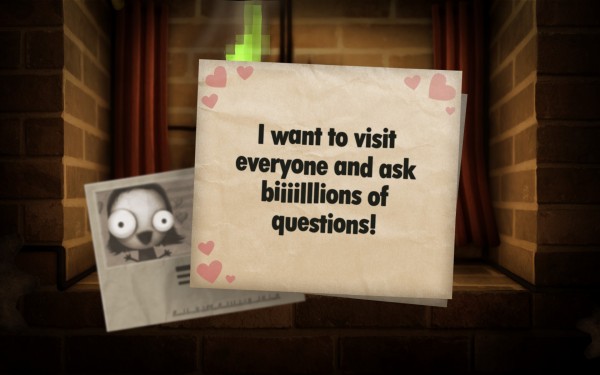 I can’t help but wonder why. Did you just run out of budget, out of ideas? Were you planning other activities outside mere work but couldn’t make them happen? Or was it all intentional? And if it was intentional, then why this shift in perspective? Why this mechanical experience lacking a human heart? Have you grown to be so pessimistic and disillusioned that you stopped believing in the importance of acting in the real world? Have all the Sugar Plumps in your world been crushed by the wheels of this giant mechanism of robots and corporations? Is the resistance doomed to be defeated and eradicated? Has the spirit of Miss Nancy died?

I don’t expect an answer. And even if you did answer, I doubt your reply would find its way to me. You see, I’m leaving this house behind. I’m joining the resistance. I’m sure that’s what Sugar Plumps would do. I know I’m old, but I can still be useful. And I have a lot of experience programming machines now, thanks to you. Maybe I can still make a difference. And if I don’t, at least I’ll still be doing something I like. Finally. Something I feel is important. Like my supervisor said, on the 16th floor: the “secret to eternal youth” is “enjoying your work, feeling important, and proper sunscreen application.”

Who knows, maybe I’ll even get to meet Sugar Plumps in person this time. I’m sure she’s still around, somewhere.

Melody is passionate about games, words, and music, and she expresses her love by meowing. You can find her on her blog, and on Twitter.