Off The Grid: Persona Q2

Allison Winters steps back into the night.

It’s been 10 years since I first experienced Persona 3 and my love of the series began. Persona 3 and Persona 4 rank as some of my favorite games of all time. I still go back to these games and always find something new or thought provoking. The original Persona Q starred a crossover of those two games’ casts, which was heaven to me. And now Persona Q2 ambles along about five years later, bringing the Persona 5 cast with it. Along with the new cast comes a new lighter tone that pokes fun at the newer Persona games. While the satire is a bit hit and miss, there is fun to be had here.

Persona Q took the time to set up just how everything worked and made sure the crossover would fit into both Persona 3 and Persona 4’s timelines. However PQ2 cares little for that, only giving the hand-wavey explanation that fate brought everyone together, and leaving it there. Every time we’re shown how one team traveled here it’s a similarly generic “we were exploring and things went wacky” explanation. Characters are mostly just broad strokes of what they were in their home games, and everyone outside of the P5 cast are in awe of the Phantom Thieves for no particular reason besides their cool costumes. It’s a game of excesses: a truck load of characters, the plot is a retread of the first but on a bigger scale, and everything’s wackier. The game is laughing at itself and expects us to laugh along.

So, quick breakdown on the plot: weird God figure keeps people with emotional issues trapped in a weird inter dimensional plane unable to leave. In the original it was a school, and in this game it’s movie theaters that screen the low points of the victims’ lives. It seems to be poking fun at more recent Persona’s love of Gods just doing what they perceive as humanity’s “wants.” But the plot has a distinct lack of urgency until the very end. The cast has to actively provoke the Big Bad around four separate times before the God simply transports them away to a safe space, and even then it takes a whole other attempt to piss them off before they’ll actually have a boss battle with you. No one really seems worried about getting home or even the fact that they are from different times. The latter point was a major reveal in the original and here is swept under the rug after the initial revelation. It fits the more laissez-faire attitude the game has going, yet there are times when this storytelling feels a little sloppy. 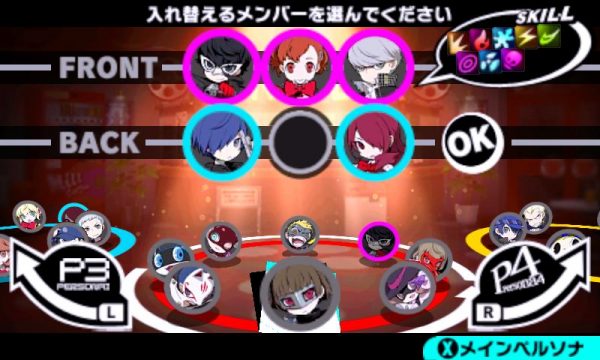 On the bright side, the movies that are screened are great. They’re all about following the crowd and not upsetting the status quo, each with all the nuances of The Room and as a consumer of so-bad-it’s-good movies I couldn’t be happier. Each game’s cast is introduced in a movie produced to reflect that group. The Persona 5 cast are in a big cheesy superhero movie that reflects their more over the top nature, even ending with a heist similar to Persona 5. Meanwhile, the Persona 3 group appear in a robot movie with a tone that matches these characters’ much colder approach to their mission. The sillier and broader tone of the movies is a reflection of the game itself essentially being a Persona-themed genre film. It takes the unsubtle hammering in of themes,using the overlapping archetypes of the characters, and the already great sense of humor in the series and cranks it up to eleven. It’s an over the top production that loves the franchise and is just out here having fun but unfortunately not every part of this satire works.

While I know the characters are being simplified immensely, and that may have been a part of the joke, it doesn’t really gel well. Since no one remembers the events of the first Persona Q, every single character interaction between the groups is a retread of something from PQ but this time with Persona 5 cast and it’s boring. There are a lot of side events that focus on drawing different characters together but since all the characters are rather basic versions of themselves, these scenes ring hollow. The rest of the satire succeeded – I don’t think I’ll ever see another scene as great as a dinosaur with a human head explaining friendship and the faults of a majority rules system – but these meetings between characters don’t succeed in the same way, feeling watered-down instead of heightened. It’s ultimately a problem with making the characters so one-note: every conversation with them is predictable. The overarching plot draws deeper from the source material, leading to stronger jokes, while the character-focused scenes don’t have that luxury. Instead, they hinder everything, neither funny nor interesting.

When I first began playing this like 4 weeks ago, I treated it as a more serious affair akin to Persona Q and that is unfair to PQ2. However it is a little lacking, especially with the characters themselves. I had a good laugh but it lacks the emotional depth that the first game had, and when I look back on these games I feel more likely to pop in the original over this. 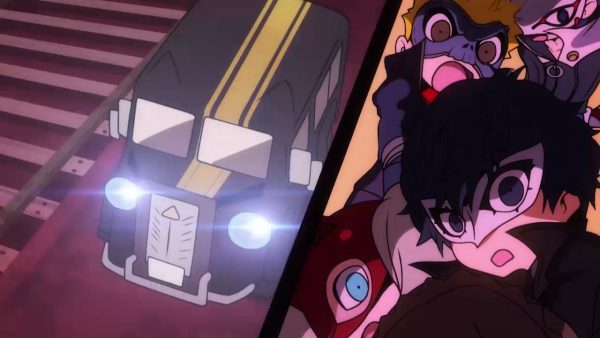