Leigh Harrison has no mobs and he must grind.

This was supposed to be a fun exercise. I wanted Kingdom Hearts to surprise me. To be this interesting oddity that was quirky, silly and strange; too much for most people to enjoy unironically but, perhaps, just right for me. It’s Disney meets Final Fantasy, after all. And I’m a quirky kinda guy, right? It should totally be my thing.

What even is Kingdom Hearts? That’s the question I asked when I set out to play every entry in the series. Three games in, and I think I know the answer: Kingdom Hearts is whatever it needs to be at any given moment. Action RPG, CCG, and now, in Kingdom Hearts II, an action game that’s sorta an RPG, too.

I wouldn’t call the series experimental. Nothing any of its entries does is new or novel. But there’s a willingness to change and adapt that I think is quite admirable. Most of the time, sequels add features and mechanics, building upon the games that came before. Kingdom Hearts instead reconfigures a handful of familiar elements from game to game. There’s always some sort of melee combat and magic, leveling up and skill assignment, but how the player controls and interacts with these systems is different every time.

With this in mind, KH II is probably my least favorite version of Kingdom Hearts thus far.

KH I is very much an RPG. You fight battles, level up characters, and equip new gear and skills as you unlock them. If you have the hours and the patience, you can grind the living hell out of it and make everything a cake walk. I don’t have the time for that, you understand, but there’s enough freedom in the critical path that one can skip over trickier worlds and return later, slightly stronger, to even the odds.

All the trappings of an RPG are present in KH II, but their importance is downplayed. You still level characters to unlock new skills, just not all the skills. Lots of the game’s upgrades are tied to specific points in the story, which significantly limits the scope for grinding away your evenings and weekends while the family is off forgetting about you. Levelling still raises stats and makes you stronger, but without the powerful story upgrades, you’ll only get so far.

The game even seems to actively discourage grinding. Completed worlds aren’t stuffed full of enemies to fight as in KH I, rather smatterings of isolated foes here and there. You, of course, could keep loading in and out of worlds to fight a handful of bad guys at a time, but it just wouldn’t be efficient. KH II is clear: the only way to truly progress is simply to play its story. This is a huge departure for a series from the “it’s 1997; we’re all 12 and get one game a year so best hope it’s really long” school of RPG design.

Despite downplaying traditional RPG progression, KH II eventually falls back into old habits. Heading into the final hours, and having completed every world’s primary and secondary quest, the game politely informed me I was five levels under its recommendation. How that was even possible given its overprotective grip on me up to that point (hi mum, hi dad; I’m 30 now), I’ll never know. Until then, being a good lad and just playing had kept me at or above each world’s recommended level. Then, looming out of the fog, came this massive (and very obvious) difficulty spike. I wasn’t sure what the game wanted me to do about being underleveled, given I couldn’t really grind it out. So I just plowed on and died a lot until I got to the end. 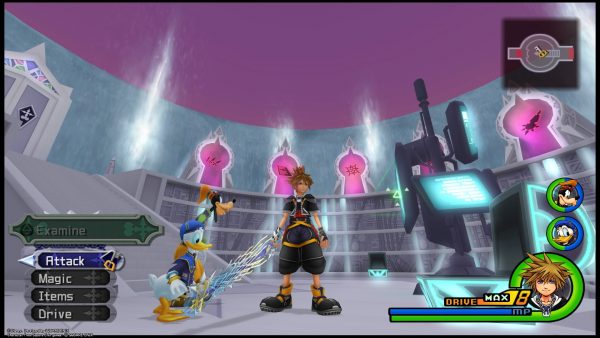 KH II just isn’t sure if it’s a proper RPG or not. Drive Forms, a collection of five special abilities unlocked throughout the story, throw this confusion into sharp relief. They make Sora hugely powerful for a limited time and can be gradually upgraded throughout the game. Doing so improves their stats, and also unlocks super secret OP movement abilities like dodging and double jumping.

All you have to do is use each Drive Form in a specific way – kill X number of Y enemy etc. – and you too will have earned the right to jump slightly higher than before. Except, obviously, you get some of these powers near the end of a game where grinding isn’t the easiest thing to come by. So, obviously, you go back to GameFAQs to uncover the most efficient place to find Y enemy, calculate that it will take you a solid four hours of drunken fighting to fully level Final Form, and then just not bother.

None of these movement abilities are essential for anything but collectible collecting, but my GFAQs crew did tell me they make boss battles easier as well. What I’m more interested in is how they exemplify the conflict at the heart of KH II. It wants to do something different with the series’ core mechanics and be a much more action-orientated game. Sora moves more quickly and flexibly than ever, zipping around fights with speed and grace. QTEs litter boss battles making them more visually distinctive and mechanically varied (believe it or not, but some are implemented in really interesting ways). Combat just flows, and the series finally pulls off the Devil May Cry it was shooting for since KH I.

It’s all undone by the insistence on retaining the RPG trappings, though. They’re not intrinsic enough to spoil the whole thing, but they do slow things down. If KH II were a straight action-adventure game, I wouldn’t have stopped to fight every single group of enemies I encountered, just for the XP. I wouldn’t have spent an hour leveling my first Drive Form so I could unlock a bastard dodge roll. I wouldn’t have stumbled into a late-game dungeon filled with hella strong enemies and platforming, only completable after maxing out ALL FIVE Drive Forms (it opens up very conspicuously at about the halfway mark).

Kingdom Hearts II could have been my favorite part of this foolhardy existential nightmare by far. As it stands, I find it the least interesting, least courageous Kingdom Hearts I’ve played. Which says a lot because I haven’t really enjoyed a single one of them yet!