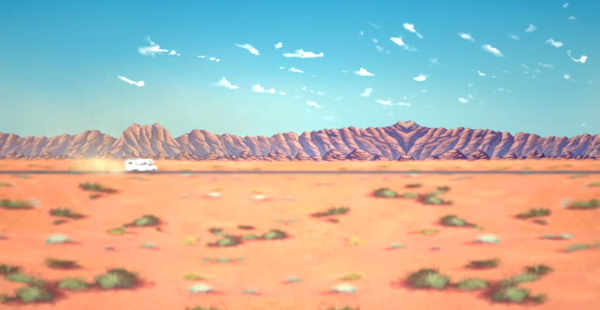 Off The Grid: Highway Blossoms

Allison Winters goes on a long trip with too much to think about.

As jaded and cynical as I like to act, I try to go into every game with a good attitude. I want a game to surprise me, to warm the icy husk I call a heart. I went into Highway Blossoms expecting a yuri visual novel that would be fine but nothing special. I am happy to say this story really threw me for a loop in the best kind of way. Due to the nature of this being a story-based game, there is a spoiler warning in effect for the entire article. If you want the short version of the review: Highway Blossoms is less a game and more of an experience – an excellent one. You’re on a roadtrip with two girls as they learn to live and love.

Highway Blossoms is what’s known in the Visual Novel community as a Kinetic Novel, which means that it lacks the branching paths and dialogue choices that are commonly associated with this genre, opting for the simplicity of clicking to advance the dialogue. You have what I call a control panel which allows you to save, load, and rewind the dialogue. That last feature is nice since I tend to accidentally skip some dialogue via clicking too fast. To some this may seem like a boring endeavor, but those who can look past that will be rewarded with a well crafted tale of romance and adventure. Those looking for the standard semblance of choice and branching paths will be left wanting, but I can’t really fault it when we have such a well-crafted tale.

The main story is a road trip between two strangers, young girls named Amber and Marina. One cynical, the other childish, they befriend each other and their road trip morphs into a treasure hunt for old miner’s gold. It’s rather simple yet fun adventure story: the girls have excellent banter together, their motivations are well defined and subtle details like Amber’s love of old cassettes bring depth to the story and characters. However it quickly becomes clear that this is more of a backdrop for the burgeoning romance between our female leads and Amber’s grief over her late grandpa. The main story is fine and transitions fairly smoothly after the gold hunt wraps up and the romance and grief subtext graduate into plain-old text. All throughout, this story is delivered with clever symbolism, a wry sense of humor, and genuine emotion. 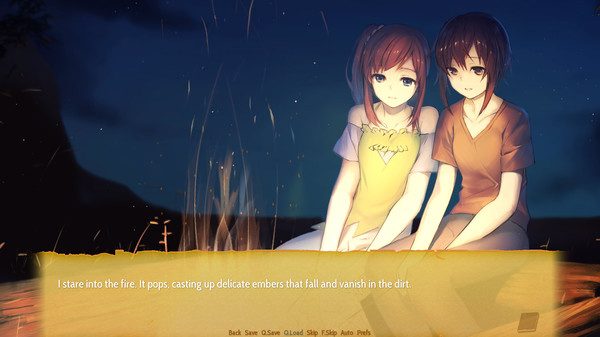 As LGBTQ+ characters are becoming more accepted in the mainstream, the problem arises that said characters are often defined solely by their sexuality. That’s not the case here. Amber is a person dealing with the loss of her grandpa, and she also just happens to like girls. Amber’s grief and the way she deals with it are very relatable. She’s using a roadtrip to attempt to come to terms with her grief that she can’t define. She can’t move past it and she’s closed herself off. As she learns to open up to Marina and overcome the grief, she starts to panic and tries to close herself off again out of guilt. Amber’s journey and character are elements that speak to me on an emotional level and I found my response to the game centered around her. Most of her problems and struggles are caused by her own mental hang-ups, such as when she pushes Marina away because she feels that her traveling companion is becoming a replacement for her grandfather. She’s forced to confront her own problems as she realizes that it’s okay to love more than just one person.

Marina’s character is more closed off in a way, so most of what she’s going through has to be picked up through story cues and minor hints. Which comes as a surprise, because she never shuts up. In a way it reflects her own closed off  approach to her own life. Even though she talks so much, it takes an emotional crowbar to pry the things that really matter out of her. I’d love to actually see the whole story from her perspective to get a better understanding of how she thinks, but that isn’t to say she’s not interesting. Her goal of defining herself after feeling lost inside a large family is compelling, and her fun loving demeanor and childish innocence make her endearing.

From the two girls’ wildly different personalities arise a whole host of problems and tensions.   Marina’s childish behavior and naive innocence make Amber feel that she should treat her as such. As the game goes on this becomes the main source of underlying tension between the girls that adds to the already to the more overt tension of getting to the music festival that Amber was gunning for. It serves as more of a back drop for the aforementioned drama and yet more character development for Amber.  In the beginning the festival seemed like a simple motivation to put Amber where the plot needed her to be, but after spending time with her and Marina it takes on a whole new meaning. By accepting Marina as a lover and travel companion to her original destination, Amber is forced to confront her own aforementioned demons which arise when she begins to realize what Marina ultimately means to her.

Highway Blossoms has chosen quality over quantity to an extent in that there are only three players of any real note in the supporting cast. Referred to collectively by the game as “ The Trio” they aren’t well defined outside of standard tropes: Mariah the jerk with a heart of gold, Joe the weary childhood friend, and Tess the quirky child. They serve their function well as the rivals in the treasure hunt and even after it ends still come back as a sort of enjoyable annoyance. They also  highlight the above-mentioned treatment of Amber and Marina as women and not just lesbains. More often than not when a piece wants to show it supports LGBTQ+ characters it ends up being cloyingly sweet about how it’s so awesome you’re gay and we all love you. Instead the Trio talks about them like any straight couple with teasing and bets on when Amber and Marina will realize they love each other. 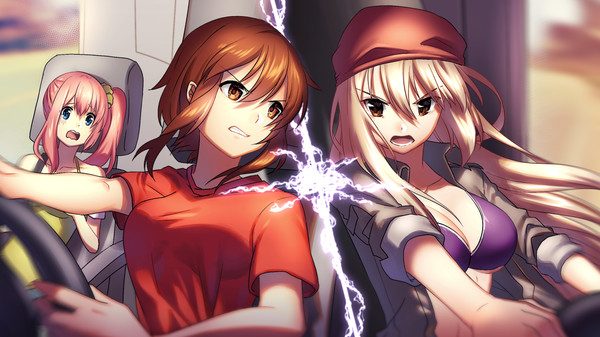 As I was doing my first playthrough I found the post gold hunting plot to wander aimlessly in a way that parallels the girl’s blossoming relationship. It’s the Now What? part of the story: the girls try to figure out what this trip is about and what it means for them. Amber’s feeling that she’s just using Marina to forget about her grandfather drives the climax. However as I think more about it, it becomes more clear what they were shooting for. The girls don’t really know what they are doing. As they hash issues out the story also gains a clear focus again. Had they ended at the end of the treasure quest then most of the power imbalances and Amber’s grief issues would be left unresolved.  At the end of day, once we reach the final destination I found myself glad that I hadn’t given up on the journey.

The art is somewhat of a mixed bag but overall is lovely. The character portraits and backgrounds are appealing with memorable designs. The animations are somewhat clunky with a special shout out to Amber’s apparent ability to don sunglasses with her mind alone. I’d be remiss to not mention that there is an official patch that adds a sex scene. The sex just seems to sit there like a bear on the toilet. Not really harming anybody but just being rather out of place. I connected and understood Amber well enough that the fact that she might try something is enough to send her guilt issues into overdrive. The events that flank the scene are strong enough emotionally that this scene feels out of place. The scene is by no means tasteless or overplayed, it just lacks any semblance of passion in an otherwise well-written relationship.

Highway Blossoms is the kind of game I want to point at and say this is how you write gay characters. The main duo speak to me on a personal level, and even if they didn’t I’d have to love them for their playful chemistry and strong characterization. It feels like we’re in an indie roadtrip movie where we get to love, laugh and learn with our heroines. It shows on a more meta-level that LGBTQ+ characters don’t need special plots to be included or have their sexuilty be a focal point. All you really need is love…and some top-notch writing.