Off The Grid: Gunman Clive 2

Back in the far flung past of January 2015, I finally played Gunman Clive, a game heralded as the best platformer on the 3DS by a person who probably stood to make some money from it. It was a mediocre game at best, but has a lovely hand-drawn look that is refreshing after so many pixel art platformers. While there is nothing overtly wrong with Gunman Clive, there is also nothing, apart from the art, that is special, either. As the more astute of you have probably gathered, they made a sequel; is it good,bad, or just more of the same? Let’s find out.

The visual flair from the original is just as great if not better in Gunman Clive 2. The style is reminiscent of Yoshi’s Island’s hand drawn look, though it’s less drawn-by-children and more doodled-on-the-back-of-your-high-school-notebook. In general, the backgrounds are subdued enough to allow for characters to stand out nicely and for players to know what to do. That said, there are just a few enemies that could pop out more, but they become easier to see once you get into the swing of the game. 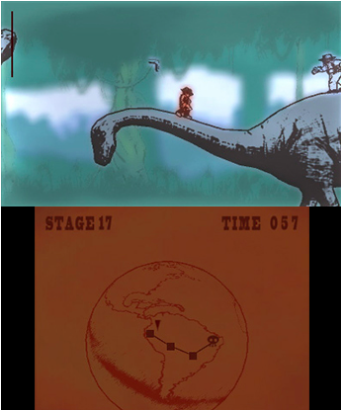 In terms of game play, nothing has really changed: you traverse platforms and kill bad guys. Neither game offers fancy gameplay, but the levels work well and the design is well done.That said, some of the platforming challenges can get rather difficult due to overuse of platforming gimmicks which overly rely on the player’s knowledge of older platformers like Mario or Donkey Kong. While the first Gunman Clive included a few mine cart rides and minor gimmicks to spice things up, Gunman Clive 2 cranks it up to 11.Standbys like disappearing platforms and giant fans make an appearance along with the return of the mine carts featured in Gunman Clive and a new animal friend.Despite their familiarity, these ideas have been done better in other games, the Gunman Clive 2 may encourage you to go back and replay those instead.

If the increase in platformer elements have a benefit, it’s in how the alter the size of the game environment. Instead of just traveling around a wild west region as imagined by future people, Gunman Clive 2 is a globe-trotting adventure in wild west world imagined by future people. It’s the kind of quirky game that flourished in the 8/16 bit eras. 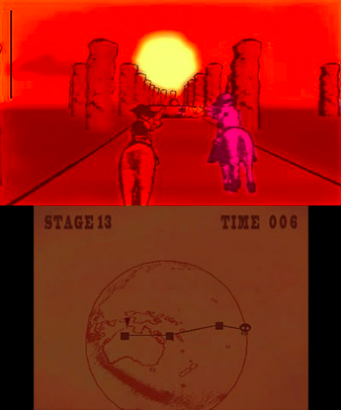 A minor nitpick with the game is that it is built more around the titular gunman than his compatriots. Ms. Johnson and the duck return along with newcomer Chieftain Bob and each has varied skill sets. Ms. Johnson seems to be wearing Peach’s floating dress from Mario Bros. 2 making the game a bit of a joke. Could I read more into this and discuss how playing as Ms. Johnson makes the game easy: yes; am I going to:no. Meanwhile, Chieftain Bob’s weapon range is considerably shorter in a game where enemies are meant to be taken down from a distance. Though some may consider that part of the challenge,it was more frustrating to me.

The original Gunman Clive was a well made game that failed to stand out, and the sequel is more of the same. It has a few more memorable levels, but even they tend to remind me of better games. With few more iterations, perhaps the game will be able to stand proud on it’s own merits rather than on the sum of it’s forefathers.