The State of Debate

To say that things have been heated in games recently would be the understatement of this young year. Much of the community is still reeling under the assault of a harassment campaign that – although visibly out of steam – shows no intention of abandoning their fight anytime soon. Not that the conditions prior to this violent outburst were all that rosy: The current nastiness has merely increased in volume and intensity what marginalized voices have always had to deal with in this space.

Imagine my unease going into the internet debate simulator Social Justice Warriors then. It is still rare for games to so openly place themselves in a political context, so I was curious to see what ideas I would find baked into its systems, but at the same time its timing and theme give it an uncomfortable air of war-profiteering. Was this going to provide much-needed comic relief after months of watching literal interpretations of obvious jokes fuel the hateful, or is it a cynical attempt to cash in on the sympathies of self-styled videogame progressives? Would it unmask the absurdities of current events with sharp wit, or would it repeat the same fallacies it sets out to mock?

The game’s basic premise expands on the running joke that the phrase Social Justice Warrior makes it sound like class you choose in a role-playing game by draping the familiar routine of online arguments in the mechanics of fantasy combat. As one of several paragons of progressivism, you fight an endless stream of trolls by depleting either their sanity or reputation meter – an early sign that the game doesn’t think highly of this kind of argument – with moves ranging from counterarguments to subtweets and personal attacks.

This constant barrage ends once your own reserves are exhausted, and between random chance and the devastating moves that some trolls wield, this tends to happen sooner rather than later. The justification for this, as any other frustrating design decision present here, seems to be that it’s in keeping with the exhausting nature of these conversations. Personally, I’m not sold on the merit of repeating something verbatim and calling it satire – do I really need to play something that feels pointless in order to be reminded that this is what real arguments can feel like? 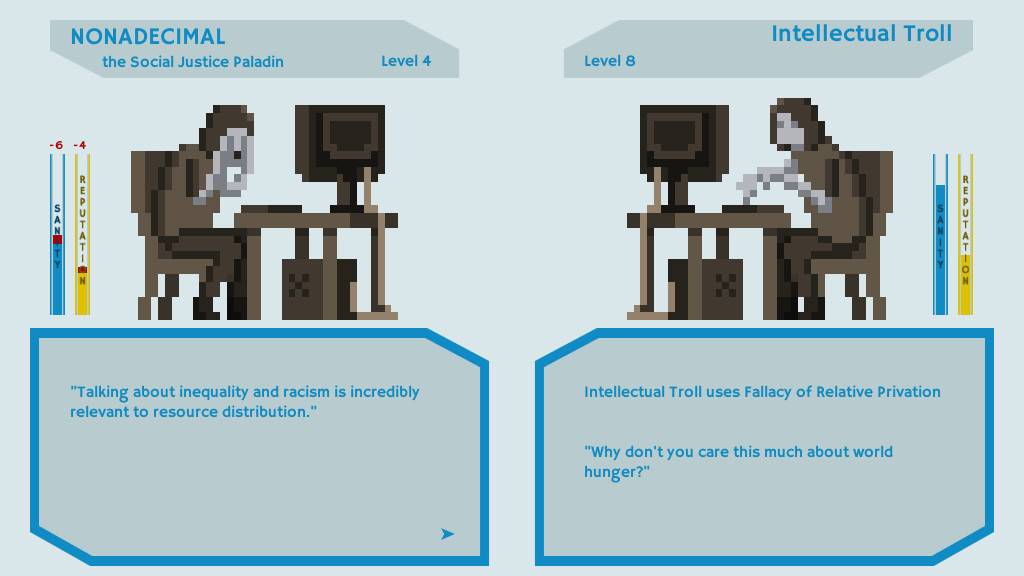 To be fair though, there is a point to the game, and its brevity means you’ll likely be hit over the head with this twist in a matter of minutes: if you manage to raise either your sanity or reputation beyond a certain level, you reach an enlightened state of being and are transformed into a Social Justice Champion, at which point your attacks are transformed into various acts of kindness – hearing your opponent out, protecting them from attacks, proposing compromise – and your goal becomes to increase their standing and confidence rather than to drain it.

Both your opponents calmer reactions and the scoreboards distinction between trolls you “fought” as other characters versus trolls you “saved” after your transformation frame this as the morally superior option, an approach that will genuinely help you change somebody else’s ways instead of verbally beating them down and driving them further into extremism. However, it also places the game uncomfortably close to the South Park school of reserving equal scorn for all sides of a dispute.

A wide variety of crappy remarks certainly shows the game’s trolls in a negative light, but Social Justice Warriors appears to be just as skeptical of its heroes. At various times throughout the game, side characters will briefly jump in to assist you, and these figures are nothing if not overzealous: rangers seem to only see extremes – The enemy of my enemy is my friend – while necromancers play into the histrionic narrative of “shills” using controversy for personal gain – Keep Fighting! Buy my ebook!

Then there’s the Social Justice Druid, the only character in the game who shows a genuine interest in questions of ethics and justice, which they demonstrate by helping your opponent and reminding you that, despite your disagreement, they are still a human being deserving of respect. Which is very true, of course, but also spectacularly unhelpful in a mechanical framework that thrives on conflict. It seems that Social Justice Warriors operates on the original definition of the phrase from before its rise to ubiquity: somebody who engages in these debates to look and feel better rather than change anything. 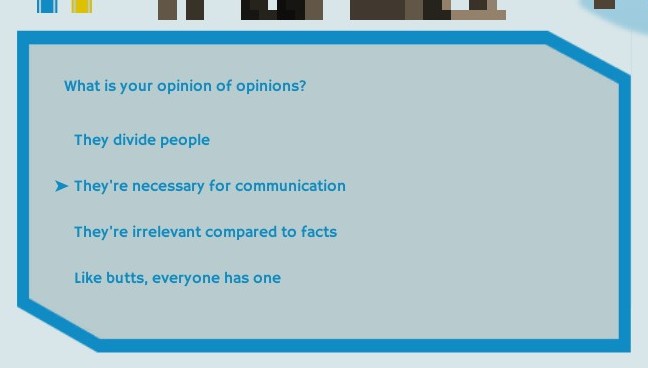 It also seems to have internalized a certain truism about flies, vinegar, and honey – falling right into the trap of blaming progressives for failing to convert their most ardent opponents on the spot. The idea that both sides are to blame for a lack of meaningful change is a tired and misguided complaint that not only denies people their rightful anger over continued injustices, but impedes any attempt to address them by making it dependent on winning the sympathies of notable detractors.

Although it’s true that, as the game observes, hateful people often argue from a place of personal pain, the idea that they would automatically abandon certain views if only we were nicer to them is patently absurd, and tying societal growth to individual growth like that allows them to stop any movement in its tracks through unwavering stubbornness and ignorance. It’s common practice to opinionate on the “image problem” of feminism, for instance, and to ask why there are so many people it has yet to sway. Rarely, however, is that line of inquiry reversed. Rarely do people ask why so many are hostile to the idea and need convincing.

By focusing entirely on the immediate effect you are having on the person you are arguing with, the game also ends up misrepresenting both how these arguments work, and why we have them. Just because you rarely see anybody change their opinion directly following such a discussion doesn’t mean that it didn’t plant the seed of change in their mind. Shedding biases, dismantling established opinions, noticing patterns in events filtered through our own subjective experiences: these things take time.

The slow speed at which personal viewpoints evolve makes it easy to dismiss the merits of any attempt to change them, but it strikes me as rather cynical to suggest anything other than immediate conversion is failure, or worse: arrogant grandstanding. Entering into these debates despite their superficial pointlessness means potentially setting off the chain of events that leads somebody else to question their long-held beliefs or change their behaviour. Despite its muddled causality, this is endlessly more direct than waiting until this happens by accident, or – as is sometimes suggested – automatically, as if bigotry is something you grow out of. 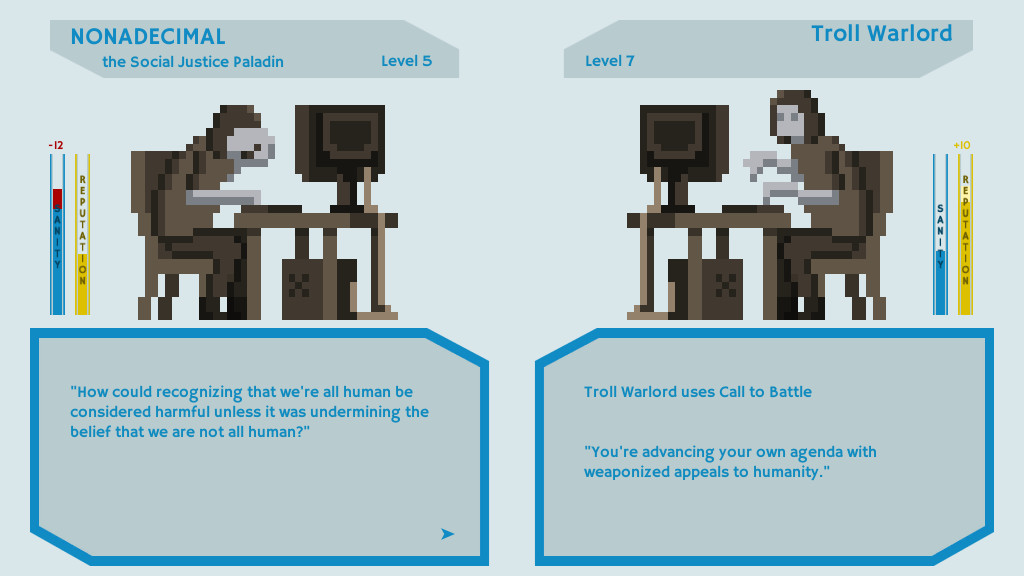 This slow and unpredictable crawl towards personal change is still a rather somber prospect and part of the reason many activists weary of having these conversations, but it helps to remember that they can reach a lot more people expected. One of the benefits of having these discussions online, in fact, is that they are often accessible to a lot of people passively observing. An invisible and therefore largely unreported benefit next to the uncomfortable side effects of that kind of visibility, notably that it enables mobs and sets up these exchanges as a public performance akin to bloodsport.

Trolls are highly unlikely to change their mind. The very concept is based on taking part in these conversations disingenuously, without any real interest. There is no telling, however, how many people saw and genuinely took in the response you gave them. It is a number larger than zero; I know this because I was once on the fence about a lot of issues, but eventually changed my mind after seeing people in the same community face the same comments and complaints time and again. My opinions have been affected profoundly by rad people ranting about things on Twitter.

I understand that the mysterious ways and nebulous results of real online debate perhaps fall beyond the scope of a deliberately small game and the constraints of reducing their workings to clear mechanics. However, through the nature of Social Justice Warrior’s omissions leads to a very questionable portrayal of online activism that, although certainly true to parts of it, takes the game in the territory of false equivalence, and confirms my initial doubts about its progressive politics.