Off the Grid: DmC: Devil May Cry

In my high school years I fell in love with movies that most consider to be garbage—fodder like Plan 9 from Outer Space, Caligula, or Bubba Ho-Tep. For me, these so-bad-they’re-good films hold a charm; the joy and fondness I feel might not be for the reasons the creators intended, but it is there nonetheless. Then in the early ‘10s, movies like Hobo with a Shotgun and Machete, among others, attempted to emulate the same kind of cheesy, over-the-top style with great success. Around this time the Devil May Cry series attempted to reboot itself and, while not explicitly trying to emulate cheesy b-movies, ended up making one of the best ones around.

Devil May Cry (DmC), at a surface level, is a decent spectacle of an action game about a foul-mouthed man fighting demons to free humanity. It’s nothing groundbreaking and, if not for its inadvertent comedy and controversy, the game would probably be forgotten by now. The story is giving its all to be recognized as “serious” with cutting political commentary; unfortunately,  it equates seriousness with cursing and amounts to a basic “wake up, sheeple” message. DmC frames every single opponent to its philosophy as a demon in disguise. Sugary sodas are actually made from hypnotic demon vomit. Mundas, the big bad, controls the world through debt. It’s a simplistic portrayal that may be dismissive of the underlying causes of the societal woes it is tackling.

That being said, it works. 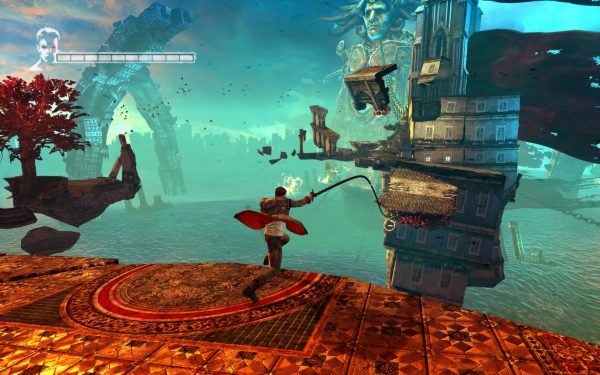 The shameless, unapologetic, cheese overload lends the game a charm that I don’t think it would have had otherwise. The rudimentary message is espoused with a sincerity that I can’t help but admire, all while I’m chuckling at it from atop my ivory tower. Movies of this ilk try so hard to be about something and DmC is the same: it desperately wants to say something that it feels is—or wants to be—important. Its pure, unsubtle nature works well with the gory and immature tone the rest of the game exudes.

Dante himself is presented as this cool, badass guy who sleeps with attractive women and has a love for the old ultraviolence. It’s not unlike Ash Willaims circa Army of Darkness, except in that case Ash’s cocky attitude and cheesy one liners were the butt of the jokes. Here Dante’s snappy one liners are presented as cool quips when in reality they are childish and ineffective. The pinnacle comes in the form of a truly memorable interaction between Dante and the Succubus: he tries to snark at how ugly she is before it devolves into the two shouting “Fuck you” at each other. The game plays it completely straight and it’s hilarious in its sheer immaturity. It’s worth sticking around for how bad the dialogue and, by extension, the story gets.

In a move that should surprise no one, Vergil—Dante’s brother—betrays everyone to try to take leadership over the humans after the defeat of Mundas. His blatant contempt for humans has been on display throughout the story and his killing of a child should have tipped off the other characters to the fact that he was evil but, nope, they are all shocked by the revelation. DmC expects you to be equally shocked but I’m too busy laughing at how goofy the aftermath is: Vergil sulking after being nearly stabbed to death by Dante before being basically told to piss off. The motivations for why these events transpire are there , but they only come out in expository dialogue, nothing as graceful as character development. This same issue comes to a head with Dante himself. 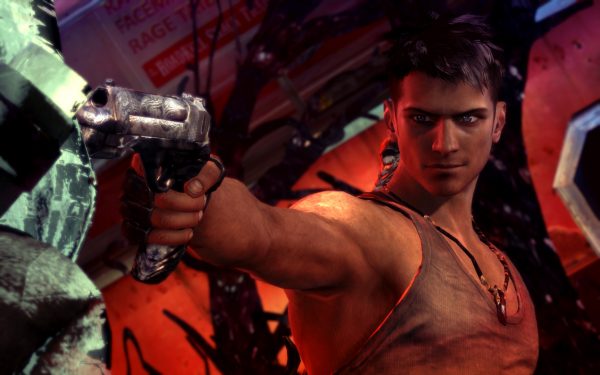 The game ends with Dante taking up the mantle of humanity’s guardian, this is meant to be the finale to Dante’s character arc yet it rings hollow. Earlier,there is a heartfelt scene between Vergil and Dante that is meant to show how they’ve both evolved yet it’s quickly followed up by a joke about their genitals. Dante has barely been opposed to the other characters’ plans, though he clearly cares about Kat after the first mission. Thus the fact that the game tells us he’s changed means little because we never see said changes. Instead, it’s just more fodder to laugh at. Dante is played dead serious like an ‘80s action star and in that way he endeared himself to me. Sure, he’s not that clever or charming, but it’s that lack that makes him likable—like watching your partner try to sing a favorite song even though you know they are going to get the words wrong.

DmC runs on what is known as Rule of Cool: if it looks badass then throw it in, logic be damned. This works heavily in the game’s favor as it covers up the incongruity in DmC’s weird and unique environments. The majority of actual gameplay takes place in what’s known as Limbo, and Limbo is alive. The world itself is actively trying to kill you—not just the demons hanging around, but the ground itself. Streets wrap around to block paths, buildings try to crush you, and things explode for no reason. It seems to take a page from They Live with mono-sylabic taunts and propaganda littered throughout Limbo, the words often free-floating in space, coming at Dante in a mass when he survives an onslaught But even the hostile world is done with such earnest oddness that we get scenes where an actual wall tells Dante to go fuck himself.

One of the more obvious commonalities between b-grade films and DmC is the use of comedic levels of violence and gore. Players are rewarded for fighting as stylishly as possible, with close ups of killing blows and an obscene obsession with being gross, like the time a fetus serves as a boss battle. This results is a huge gory mess of a game obsessed with being cool as can be but it’s at least cohesive across the board from the goofy metal soundtrack to its broad strokes narrative, it all forms this wild monstrosity of a good time. 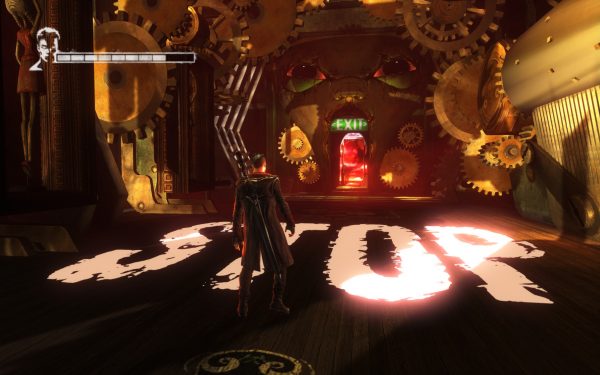 DmC is, by all accounts, a big dumb lumbering beast of a game that thinks it’s anything but. Here’s the thing, though: I love this game. It’s Hobo with a Shotgun, a personal favorite, just without the self awareness. DmC has all the charm of a dorky lesbian who thinks they’re being smooth: it’s endearing but not in the intended way. The genuineness of the intent is the secret ingredient, and it seems to be held by everybody who worked on DmC, including one voice actor who compared the story to Shakespeare. Which if I’m being honest, is a level of confidence that I’m striving for in life.

Tags: Devil May Cry, DmC
← Due Diligence: Vampyre With A Why
Opened World: What Binds Us →