Due Diligence: Vampyre With A Why

Leigh Harrison had but one choice.

I’m wondering if you can cast your eye over a case for me? Missing person by the name of Tommy Johnson. Video game designer out in the new development off the I17. Reported missing by colleagues 23 Sept after failing to show for a meeting.

He was working late at the office the night of 22 Sept and was last seen at his desk circa 11:50. We’re placing the disappearance somewhere between then and the janitor getting in at 05:58. Locked office, no sign of a struggle, car still in the lot. We swept the place and came up with nothing but an encrypted drive. Tech have finally got it back to me and it’s slim pickings.

Only thing on there is a Slack chat log between Tommy and studio intern Veronica “Nic” Miller, previously unconnected to the case. It’s some pretty bizarre stuff so I’ve attached the full transcript below for you to take a look at. My thoughts are it’s just some office banter, but I’d like your opinion before I rule it out. Given your history with this sort of thing, Detective, I’d appreciate your opinion. 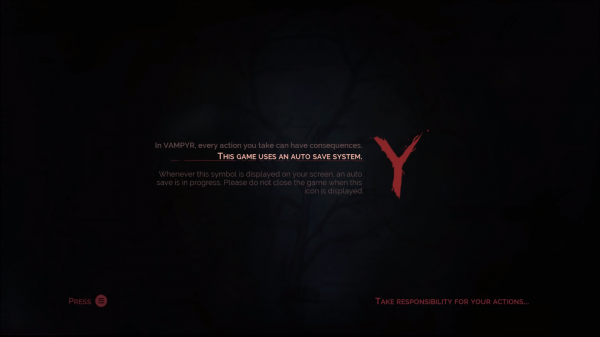 Hey boss – are you free?

Come into my office

Am I stll the boss?

I think you called me boss

*scrolls up a teensy bit*

Did you have a good weekend…boss?

You got the splash screen text?

Choose your decisions wisely. This game uses an autosave system.

Please do not close the game when this symbol is displayed.

Yeah, doesn’t that cover it?

I mean itdoes but not HARD enough you know dude

We really need to be hitting players harder with the warning

Like VAMPYR is going to be a fucjing BRUTALl RPG

You make a decision and it could come bite you 20 hours later k?

Okay, okay. Sorry, didn’t realize we were going for such an overt tone.

Its not overt my guy just honest

Vampyr is a hardcore game that’s all

And we need the convo wheel stuff to be as TOUGH

In Vampyr, your actions have consequences.

[Then the autosave stuff]

And not really enough caps for my liking

And I also think auto save is two words

In VAMPYR, every action you take can have consequences.

THIS GAME USES AN AUTO SAVE SYSTEM.

[Then the auto save stuff]

TAKE RESPONSIBILITY FOR YOUR ACTIONS

You know i liked the accountability thing you did

So I added it to the end in all caps 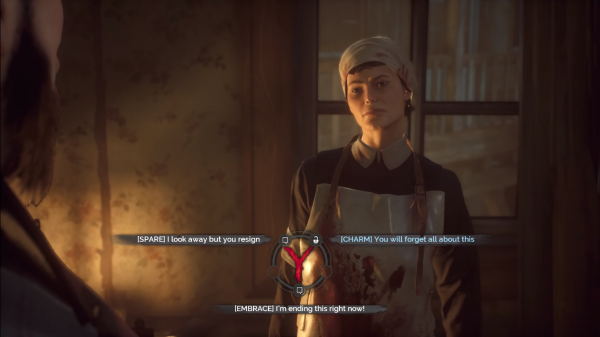 Are you still at the office?

Still in my office…which is always open ;)

You played the thing yet?

Yeah, right up to the first really big choice.

It’s a little harsh, no?

HAHA YOU GOT PWNED!!!

Not really if I’m being honest. Felt a bit cheap.

Okay, so I’d sunk my teeth pretty deep in the game, about 12–15 hours up to that point.

So the stakes were pretty high.

I see what your doin & I leik it

Yeah, I was pretty far in the game.

Totally unintentional but there you go.

Not at all ur the best

That’s what you keep saying.

Cos it will def happn id the metacritic hits 85

So yeah, I’d played for a while and was really enjoying the conversation system.

I got flourishes of L.A. Noire from how asking the wrong thing can close off questions.

And how it subverts the Mass Effect dialogue wheel by moving options around.

Like, the good one isn’t always top left and whatnot.

So I had to actually pay attention to what I was saying, not just pick the paragon/renegade.

I pretty much designed the ehole thing myself

*With a little help from my friends*

You’re such a dork.

You’re one of my friends tho aren’t you?

Even though you’re a jerk a lot of the time, I suppose so.

So you were sayin

So I’d spoken to everyone and learned all about the nurse’s motivations.

That she was a Romanian émigré with links to the resistance back home.

And that she was only blackmailing Lady Ashbury to fund her underground clinic.

Which was the only thing keeping the poor of Whitechapel safe from Spanish Flu.

I wrote most of that

I get to the point where I confront her about the blackmail.

And my options are:

[SPARE] – She resigns from the hospital but keeps running the clinic.

[EMBRACE] – I eat her because I am a vampire

It’s even got a little symbol of an unlocked padlock next to it.

As if to say that this is a special option I’ve *unlocked* by being thorough.

Playing well, you could say.

But when I choose it, I…

I melt her brain and she goes insane.

So this just fufks with that by making it backfire

But the choice is pretty clear that she’ll just forget the blackmail.

Then I turn her brain to bologna.

The txt is actually more ambiguous

YOU WILL FORGET ALL ABOUT THIS

But the dialogue right before it explicitly says she’ll forget the blackmail.

Yeah but that’s not what the text says 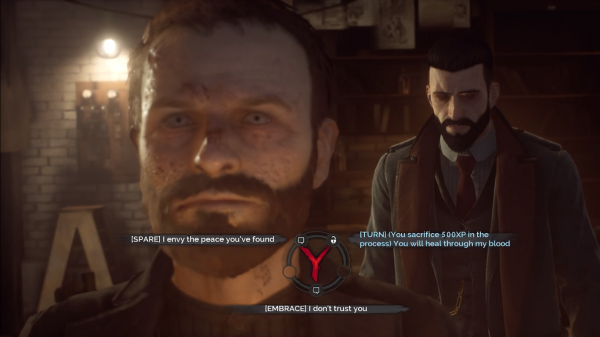 Come in2 my office

I got a few minuts

What even is [TURN]? It’s literally not even a thing up until this very moment.

Spare, yes. Embrace, yes. Turn? What IS that?

It basically stops them from turning into a murderous Skals

A Skal – like the ones I’d met in the sewers right before this choice?

The entire village of Skals that had subsisted on only rotting flesh for centuries?

And had consciously avoided draining the blood of the living like conventional vampires?

The Skals the game had presumably taken me to for a reason?

Perhaps to reinforce Sean’s claim that, as a pious man, he could control “the hunger”?

But you showed me one thing and then did another.

I [SPARED] him and he went on a fugking blood drive immediately.

I showed you somtehing and didnt tell you the consequences

You want to kno the outcome before the answer

But you set me up!

Can’t you see that?

None of these choices make any logical sense.

Not compared to how the rest of the game works.

And not how the narrative presents itself.

We’re making it for the hardcore not casuals

In the opaque world of choice and consequence we’ve made

Are you using my own press release to fire me?

Look its nothing personal

Look out your window.

Look to your right, out the window.

What the fudk are you doin out there

Were on te 6 floor

I heard my contract had been terminated.

But I’m thinking it might just have been my employer.

That stake joke was deliberate, by the way.

Woah you cant come in here

I havnt invited you in

I BANISH YOU BACK TO YOUR CRYPT VAMPYR

But you invited me into your office.

But ony in slack

Is tht al it takes?

Look, we did rght by yu

U dont hve to do ths

No pay, no bonus, no healthcare. Nothing.

You didn’t even invite me to the Christmas party.