Opened World: What Binds Us

Miguel Penabella walks with a purpose.

Printed on Death Stranding’s box art is the claim that its social strand system “ushers in the new ‘strand game’ genre.” As is typical to most Hideo Kojima games, Death Stranding spouts a lot of jargon overloaded with symbolic meaning, with characters regularly referencing bridges, knots, and networks in a story fundamentally about connecting people. The term “strand” takes on particular significance in this game; its conflicting definitions are directly acknowledged and steadily unpacked throughout the story. Set against the backdrop of an apocalyptic event called the Death Stranding, eldritch horrors called beached things (BTs) have been stranded in a liminal space between life and death, haunting the Earth like ghosts. Humanity has since scattered to isolated cities called KNOTs, which are connected via porter companies that ferry deliveries across the treacherous landscape. Protagonist Sam Porter Bridges is contracted by one such company called Bridges, and tasked with hiking West to locate his kidnapped sister Amelie Strand and return her to the capital on the East Coast, while also activating the Internet-like Chiral Network that will wirelessly link isolated bunker-settlements to each other and facilitate the rebuilding of a destroyed America. Via a hologram communications system, Amelie waxes on the etymological breakdown of the word strand, noting three distinct definitions: strand as “part of rope or bond,” stranding as “being washed up on the shore,” and stranded as “when you can’t go home.” This thematic tension between being bound together or being stranded alone forms the heart of the game, as the Chiral Network is meant to “make America whole again,” a sentiment repeated throughout the story. Despite its arcane mythology, Death Stranding is ultimately a straightforward game about the various strands that bind people together, from technology to labor to family.

In the first act of the game, a corpse disposal worker named Igor laments how the United States has been disconnected infrastructurally and technologically. “America was a country,” he tells Sam, “Anybody could go anywhere they damn well pleased… Hell, you could even visit other countries! Hard to imagine it now.” Airplanes and highways once connected the world, but the presence of BTs means the risk of a voidout, a cataclysmic explosion upon contact with these creatures that forms a massive, impassable crater. Amelie, we are told, spent the past three years trekking west from the East Coast to the remote Edge Knot City in an effort to “rebuild the country,” setting up the wireless Chiral Network. The Chiral Network facilitates labor and communication, collapsing distances between people. Photorealistic hologram communication over the Network enables medical workers like Deadman and the abducted Amelie to carry out their work seamlessly, bypassing spaces and time zones as their bodies are virtually broadcast wherever they are needed. When Amelie pleads with Sam to complete her work expanding the Network, Sam is cynical that “cable” can reconnect America, responding brusquely, “America’s finished.” He has a point—as Death Stranding is clearly a satire of the Trump era, with its “make America whole again” refrain, one can’t help but think of the culpability of technology in driving people apart rather than bringing them together, as shown in recent real-world events like Cambridge Analytica’s involvement in harvesting data to sow public disharmony and swing elections, or in technology companies’ partnerships with authoritarian powers more generally. 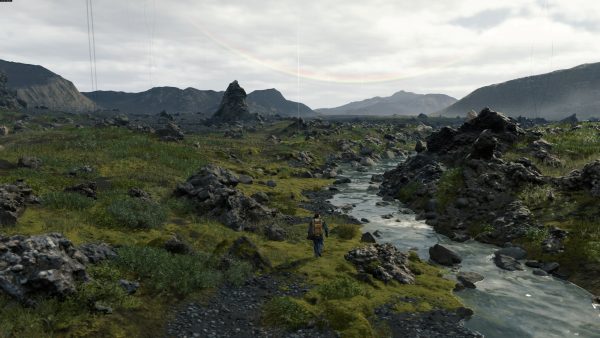 Despite this, Death Stranding maintains a belief in the potential for technology to reconnect the country in a project called Reconstructionism. As Sam gradually ventures into hostile frontiers and activates the Chiral Network, its operation enables access to more tools and infrastructures that accelerate development in inhospitable landscapes. The Portable Chiral Constructor, a 3D printing device, allows Sam to craft roadways, ziplines, safehouses, postboxes, and power generators that lay the foundation for the transcontinental transport networks that Igor longed for at the start of the game. As Death Stranding is connected online, infrastructures left behind by other real-world players will also appear in the landscape, forming a sense of collective struggle to rebuild and reconnect. In her astute review of the game, Heather Alexandra sees the online connectivity on a server as speaking to one of the game’s conceptions of “strands.” While players may feel initially stranded in isolation at the start of the game, the eventual discovery of other online players’ makeshift ladder bridges and structures builds towards an interconnected web of activity and sharing that lies at the heart of Kojima’s proposed “strand game” genre.

While the game presents the development of online technology as necessary in rebuilding the country, it nevertheless also binds Sam and other contract workers to an oppressive labor structure. Under contract by Bridges, Sam wears a device on his wrist that resembles both a smartwatch and a handcuff, which Deadman euphemistically frames as a tool to “keep us all connected” but is simply a means for constant surveillance of Bridges’ contract labor pool. Even in his personal quarters, Sam remarks, “Isn’t anything private anymore?” upon discovering surveillance equipment in his bathroom. Bodily fluid samples are also collected without consent for physiological data to calibrate Sam’s Bridge Baby (BB), a premature infant housed in an embryonic pack who can detect BTs. The vast collection of data by Bridges allows the company to micromanage its workers, seen in the ways players are incentivized to carry out deliveries as effectively as possible and obtain bonuses. Death Stranding, like gig economies under companies like Uber or DoorDash where workers are paid per completed task, aggressively tracks user data. If Kojima means to satirize gig economies via this system, he replicates its gamified systems precisely. Upon completion of a delivery, players are greeted with arcane metrics called the Porter Grade, in which multiple factors including delivery time, cargo condition, distance traveled, etc. are meticulously laid out in flashy animations that deliver a pyrrhic sense of achievement to gamify work. Mirroring a gig economy app, your labor is subject to ratings on social media via a system of likes. Death Stranding constantly invites players to like every encountered piece of online infrastructure, deliver other players’ dropped cargo, or complete half-finished structures in anticipation of higher and higher ratings as a reward. 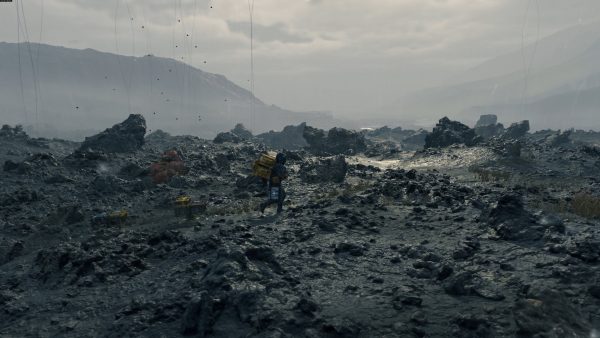 Just as technology binds Sam to a gig economy system of work, it binds him to the player, who forms an intimate bond with his bodily experience of work. As a porter, Sam carries a burdensome backpack strapped to his body that will sway violently if the cargo’s weight isn’t distributed equally, causing him to topple over and damage his shipment, thus lowering his overall rating. So much of Death Stranding is about controlling basic mobility, where readjusting weight via left and right triggers allows Sam to keep an awkward balance as he ambles over rocks, plows through snow, sprints down mountainsides, and wades through fast-flowing rivers. This work is all done quietly, as the frontier is largely emptied of other people, though sound still escapes: of Sam’s labored breathing, grunts of physical exertion and pain, and positive affirmations directed back towards himself to keep up his spirits. When venturing into the wilderness, the camera will sometimes push backwards, revealing an expansive wide shot that renders Sam tiny against the sharp relief of a painterly landscape. Sounds fade away and are replaced with the game’s original soundtrack filled with moody songs that one imagines Sam listening to on a playlist as he completes his job. Companies like Bridges desire Sam’s labor because he has an ability to resurrect himself from a place called the Seam, a limbo space between the living and the dead opened up by the Death Stranding. In that sense, Sam is the ideal worker, unable to be killed so long as he finds his way back to his physical body. Consequently, Sam’s body—like many of the other bodies of contract workers encountered, such as Léa Seydoux’s Fragile—is horribly scarred because of exposure to unearthly elements while on the job. Plentiful scenes of Sam’s naked torso reveal a bloody history of injuries that serve as physical markers of Sam’s inseparability from the labor that simultaneously sustains and exhausts him.

And what keeps Sam going? If he feels oppressed by the watchful gaze of Bridges and cynical towards the work of the Chiral Network in rebuilding an America he feels is irreparable, why does he do the work that he does? Death Stranding, for all its commentary on contemporary politics and late capitalism, maintains an underlying hopepunk faith that humanity can be good if people just take care of each other and make the effort to connect. Sam trudges through apocalyptic wasteland because he’s bound by love to his family, often literally. One of the first tasks encountered in the game is to deliver his mother’s swathed corpse to an incinerator high in the mountains, in which the grotesque but beautiful imagery of one body strapped to another foreshadows Sam’s later dedication to BB, his Bridge Baby he nicknames Lou. Other characters reason that BB should be retired from duty and incinerated, but Sam goes out of his way to care for the surrogate child like a father. Strapped to Sam’s body like his mother before, Lou represents the promise of renewal even amidst ubiquitous death. The future may remain uncertain, but the simple act of helping other people is concrete and possible. 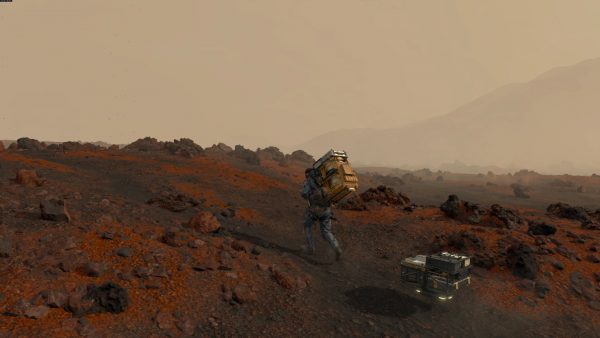