Off The Grid: Beat Cop

Allison Winters is above the law!

I may love schlocky movies such as The Evil Dead and Bubba Ho Tep, however I’ve never been into the silly police action movies that populated the 1980’s and 90’s. Beat Cop does not attempt to accurately portray 1980’s police work, instead billing itself as an homage to the cheesy cop shows and movies of the era. This means that criminals are shot on sight while the chief yells in your ear, and there’s a distressing lack of paperwork. It’s hard on the mean pixelated streets of Brooklyn, and by hard I mean monotonous.

Jack Kelly is the titular cop and the controls, like him, are rather simple: you point, click, and things get done. Every day consists of the 8-6 shift patrolling a small neighborhood and keeping the various criminals in check. The Chief gives you some tasks such as writing tickets or tracking down crooks, but most of the day is spent exploring and possibly getting involved with the criminal element. The game is nice enough to keep track of where you stand with the major factions on the street which affects how they react to you. I found myself shut out of certain gangs’ missions because I had arrested too many of their boys previously. You’re left to your own devices on most days and how you do your job is ultimately up to you, however most days are run of the mill police work that occasionally dabble in corruption. 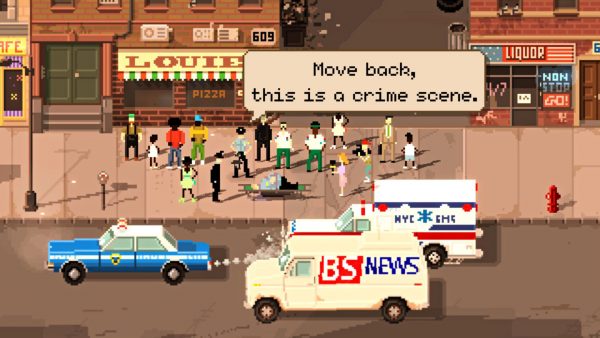 The game really has the potential to suck the player into its world given the chance, especially those who enjoy the cheesy cop movies the game is paying homage to. However for someone like me who really wasn’t a fan of these types of films, the game can quickly become a slog. The routine sets in: make my rounds, write tickets, run “olives” (read: drugs) for the local mafia, write more tickets, talk to a stereotypical store owner. Lather, rinse, repeat till you’ve torn your hair out and started using shoe polish in lieu of haircare products. The plot involving you and the senator who cost you your cushy detective job has the potential to be interesting but the characters and world are too self-consciously stereotypical to keep me invested.

Kelly is a catch all of every 80’s cop trope and nothing much else. He has an estranged wife, he talks tough, and he’s slightly sleazy. It works for the most part as the setting is equally cliche, warts and all. Here, italians are mobsters, blacks are gang bangers, and russians are hilarious drunks. While I won’t attempt to speak for those groups as I’m not part of any of them, it really doesn’t sit well with me. When making an homage to movies and the like of your childhood, you really don’t want to change things lest you lose what made those movies so magical. However, bringing them into the modern era with the unsavory elements intact feels tactless. It could be as simple as making fun of those stereotypes and pointing out why they are silly, but don’t hide behind the guise of a throwback to an older style. But hey, let’s not get too serious in our game about crime and corruption. 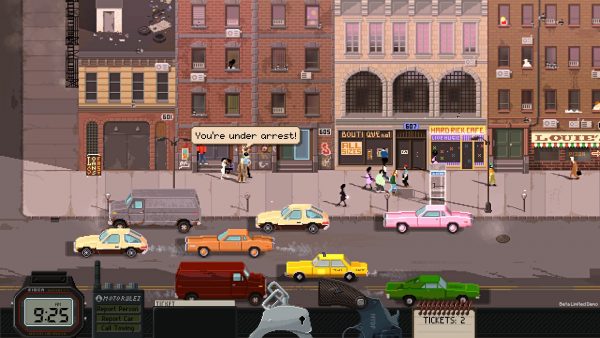 The game does have its clever moments, mostly in the form of references to famous eighties movies and cliches. Your mentor on your first day, Fat Mike, gets shot down right after he mentioned that it’s his last day till retirement. The more silly cliches can outweigh the unfortunate ones and I may play on to hopefully see a sweet car chase. Despite not wanting to keep playing I’d be lying if I said the game didn’t elicit a few chuckles courtesy of the ridiculous dialogue. Jack Kelly and the pavement he pounds are relics of a bygone age of film that may hold charm for some but times have changed; the inability to look back with a critical eye hurts the game.

This is one of those times where I have to say this wasn’t my game. Does that make it a bad game? No, it’s functional. Nothing about it is glaringly awful but it doesn’t do anything that I want to shout about from the rooftops. The game’s lack of self awareness of it’s outdated tropes hurts any enjoyment I could find.Those who grew up on cheesy cop movies will find enjoyment and probably want to stick around, but the rest of us might want to pass on this one.