Opened World: Theater of the Mind

Miguel Penabella tunes in this week to another episode.

The radio is ubiquitous in the world of Fallout. Accessed via the portable Pip-Boy device wrapped around the player-character’s wrist, the radio transmits a constant stream of music (popular and classical), news, and propaganda. Likewise, it also syndicates radio dramas as one of the popular forms of narrative-based entertainment for the wasteland. Fallout’s emphasis on the radio should strike players as significant. This is a series distinctly influenced by 1950s culture including retrofuturist iconography and atomic age anxieties, where television—and not radio—was the mass media that captured the hearts and minds of Americans in a postwar society. Indeed, Fallout’s predominantly 1950s aesthetic misses the height of the Golden Age of Radio, which spanned from the 1920s to the early 1950s but peaked around the 1930s. The subsequent popularity of the television supplanted the radio, but televisions in Fallout 4 are stuck in a perpetual standby devoid of programming. Only radio towers broadcast on the airwaves, supplying on-the-go entertainment for the Lone Wanderer and the primary mass technology for the wasteland. While portable transistor radios did emerge in American storefronts in 1954, Bethesda’s recent Fallout games play upon nostalgia for radio’s earlier days prior to the introduction of television. Within Fallout 3 and Fallout 4 are period radio dramas, and it’s this inclusion of a bygone narrative form where interesting links between radio and videogames emerge.

Radio dramas convey fantastical stories mired in pulp genres like adventure tales, detective stories, Westerns, sci-fi, and comedies through a mix of voice acting and creative sound design to visualize an imaginary setting. Often, these stories involve some kind of escape from an exotic locale. Vincent Price’s performance of Three Skeleton Key for the Escape anthology series recorded in 1950 is particularly evocative and resembles the narrative approach of text adventure games. The drama is set in a remote lighthouse, and Price carefully guides viewers through the locale to spatially habituate his listeners: “Set in the base of the light is a watertight bronze door, and in you go and up and up, round and round. Over the light storeroom is the food storeroom, and over the food storeroom is the bunk room where the three of us slept.” Price goes on to extensively detail the internal architecture of the lighthouse much further in this step-by-step manner. Like the text adventure game, radio dramas like Three Skeleton Key rely similarly on language as a means to visualize; radio serials are audio-based the same way games use text. For instance, the expository language of the text adventure Zork mirrors Price’s words, meticulously laying out a space: “A passage leads to the west and a dark staircase can be seen leading upward. A dark chimney leads down and to the east is a small window which is open.” Many sci-fi and noir radio dramas also reflect pre-atomic age fears that Fallout 3 and 4 play upon. Orson Welles’ infamous radio broadcast of The War of the Worlds in 1938 employs the imagery of an unknowable foreign threat and destructive future weaponry, themes that reemerge in the context of Fallout’s wasteland following nuclear warfare and annihilation. 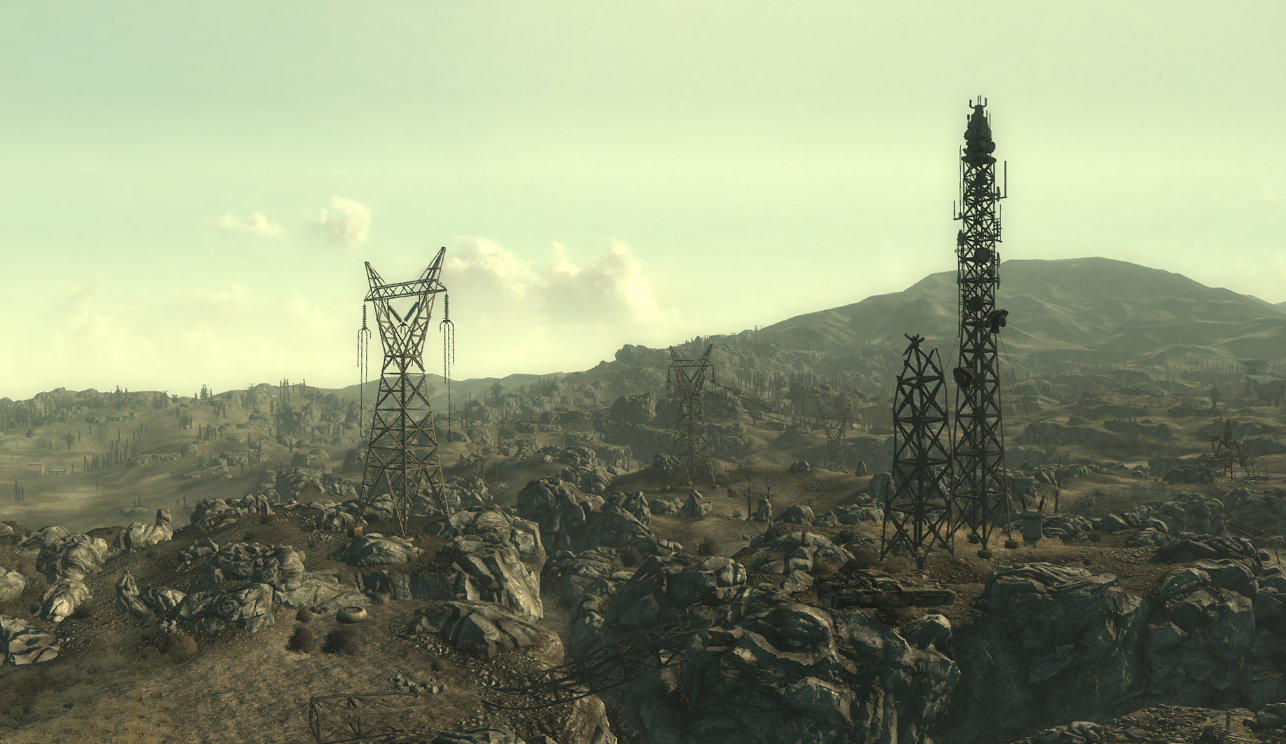 Bethesda’s two recent Fallout games humorously pay tribute to the primacy of voice acting and sound design in shaping the narrative of radio dramas. The familiar form and style of old time broadcasts appears in Galaxy News Radio’s serialized radio drama The Adventures of Herbert ‘Daring’ Dashwood in Fallout 3 and The Silver Shroud in Fallout 4. Dashwood is split across four episodes, separated by the usual playlist of songs, news, and public service announcements. The many hours it takes to complete Fallout 3 means that players will encounter re-runs of the show as it’s syndicated throughout the capital wasteland. The show itself parodies noir tropes in detective and police procedural storytelling, featuring a bumbling protagonist who touts himself as an effective hero despite the unheeded competence of his “stalwart Ghoul manservant, Argyle.” Moreover, their encounter with the femme fatale Penelope is paired with kung fu action, creating a weird hybrid of generic styles that makes sense in the context of Fallout’s world of 1950s pulp fiction. This pulpy style continues with The Silver Shroud broadcast in Fallout 4, introducing the eponymous comic character alongside The Mistress of Mystery, both of whom also appear in the Unstoppables comic magazines that can be found throughout the Boston wasteland. The Silver Shroud amalgamates many characters including hard-boiled detectives from shows like that of character Michael Shayne and proto-comic superheroes from programs like The Shadow. Dashwood and The Silver Shroud are characters that precisely fit the style of the Golden Age of Radio, giving players a taste of this form of antiquated storytelling while roaming the wasteland.

Like videogames, radio dramas rely heavily on the vocal performances of its actors to immerse audiences in imaginative storylines. Radio serials pioneered the craft of voice acting early on. Distinct from stage or cinematic acting, voice acting lacks visual accompaniments like gestures and close-ups and instead exaggerates the theatricality of the voice. Radio drama, the so-called “theater of the mind,” is an imaginative form. For instance, writer-actors like Wyllis Cooper and Arch Oboler overly accentuate an eerie vocal delivery for their seminal horror radio show Lights Out. Simplistic descriptions of a dark house on a hill are punctuated with an intense emotional charge given Cooper and Oboler’s deep, blood-curdling voiceover narration that predates the work of Tales from the Crypt or The Twilight Zone. The aforementioned Vincent Price for Three Skeleton Key channels both the staccato delivery of actor Humphrey Bogart and the nasal deadpan of Peter Lorre, the latter of whom performs for horror radio dramas including the great series Mystery in the Air. In Fallout 3, voice actor Paul Eiding plays Dashwood, enthusiastically imbuing the character with the archetypical “old timey radio voice” with his non-specific Mid-Atlantic Accent. Eiding’s lively performance counters the grounded and more perceptive Argyle voiced by Mark Rosson, whose gravelly speech provides the voice of every male ghoul in the game. Likewise, the fullness of Wes Johnson’s voice lends his performance of the Silver Shroud in Fallout 4 a sense of over-the-top heroism, and Johnson makes sure to heighten this performance whenever he slowly enunciates the Silver Shroud namesake as a means to pompously self-mythologize in front of criminals.

In addition to the professional voice acting of radio dramas, the liberal use of creative sound effects contributes to audience immersion into storylines. A significant allure of radio drama concerns the spectacle of sound itself. People tuned in to hear strange tales of exotic locales, and resourceful foley artists like that of the aforesaid program Lights Out play spooky noises like monstrous growls or blood splatter that underpin the horror narratives of each broadcast. Bethesda replicates this close attention to the sound design of its radio dramas, incorporating numerous sounds in Dashwood including the sound of unlocking doors, creaky footsteps, cocking guns, and explosions to better envisage the scenes taking place. The Silver Shroud expands upon these stock noises to also include ambient noises like ruffling papers and electronic crackling, and some characters like the Mob-Bots speak through a robotic vocal filter to convey to audiences their machinery in lieu of concrete imagery. These narrative and stylistic flourishes cohere with Fallout’s post-apocalyptic, world-building project, complementing the broader storylines and conflicts such as Fallout 4’s exotic adventure tale of the Cabot family and their cursed archaeological artifact or Fallout 3’s eldritch horrors discovered deep in the haunted Dunwich Building. In addition to hearing the thrilling adventure tales on the radio, players also live them as the storyline progresses. 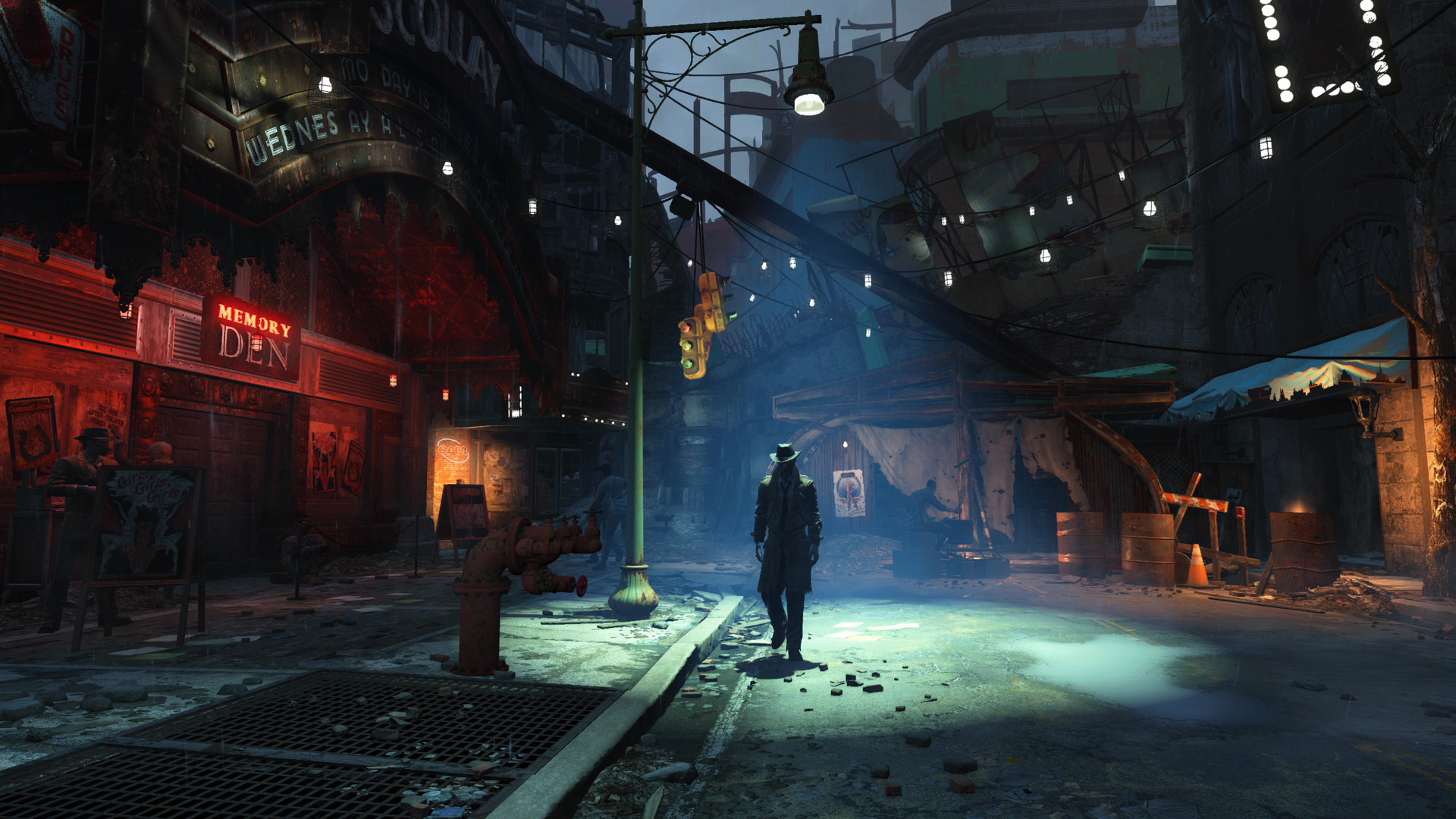 Radio embodies a shared national culture, were radio dramas were once syndicated and enjoyed nationwide instead of localized in discrete regions. The evening fireside chats by former U.S. President Franklin D. Roosevelt during the Second World War reached millions of listeners tuning in for a familiar voice of comfort in a time of uncertainty. Indeed, part of the allure of the radio in the world of Fallout is that everyone is listening to the same program given the lack of other entertainment options. The many radio towers that dot the landscape as discoverable points of interest serve as some of the last remaining pre-war infrastructures that continue to flourish in the wasteland. Players can encounter fans of the Silver Shroud in the Boston wasteland and even complete storylines for the radio station in Fallout 3 and 4. Likewise, the radio stations of New Vegas implicate its wasteland casino culture with paid sponsorships and commercials that enhance the realism of its world.

For the residents of this post-apocalyptic world, the radio offers a temporary reprieve from the harsh realities of the landscape. Listeners come into contact with pre-war music and forms of drama that have mutated over time. In these games, Bethesda nostalgically champions a medium that has been sidelined in favor of the optics of film or television, allowing players to once again come into hours and hours of contact with a mass entertainment that has since seen its prime years.