Off the Grid: A Summer with the Shiba Inu

Lockesly Winters has gone to the dogs.

A Summer with the Shiba Inu juxtaposes cute photorealistic dogs with themes of anti-facsim and the spread of invasive technology to create a wild experience. At first glance it looks like a fun time with cute dogs doing cute activities, but soon it delves into the various atrocities committed to keep this island of technologically advanced dogs under the thumb of the ruling class. Spoilers will abound in this piece, so you’ve been warned. It’s available on Steam for nine United States Dollars, I say give this one a chance to surprise you.

The story is at least kind enough to ease the player into the darker themes, opening with a cute little lunch between Syd and her friend Max. Amidst all the dog puns, though, we get small hints that this place was once home to humans. It’s still just some cute dogs in funny outfits drinking tea and having a good time, but soon things take a turn for the horrid. The character Hei-fen challenges Syd to a deathmatch called an ARIna and from there we really start delving into Syd’s less than savory past.

Our protagonist Syd is by her society’s standards a Good dog that  has killed another dog during an ARIna and put many dogs through painful events in her pursuit of power. Yet even if she wasn’t a fluffy animal it would be hard to not feel bad for her because it’s not solely her fault; it was the island’s government that put the pieces into place. She’s emotionally shut off from the world due to institutionalized trauma suffered in her youth: as a child she was forced through a series of combat tests, ARInas, to determine her worth in society. All puppies on the island are put through this to deem them either good or bad dogs in the eyes of their peers. The ARInas are non-lethal but force the participants into harsh survival situations that force them to destroy their opponents and in the end their allies as well. Despite there being few actual fatalities, the dogs are shown to still be scared by the events of the ARInas since they do feel the pain that they go through in the matches, and the price of losing is social capital.Good dogs have more privileges and can command dogs below them to do their bidding. While the bad dogs are just ignored and live mundanely under doggy capitalism. The dog’s early life revolves around these tests and while what goes on in them is not broadcast to the public, the top ranking dogs are always in the public eye. It’s all used to perpetuate a culture of strength and security for the island. However, most dogs here are not safe, relying on home security and other pieces of technology to keep them safe from the threat of random street violence and theft. Despite the fact, said technology has made them lose their more natural instincts and develop more human-like behavior. 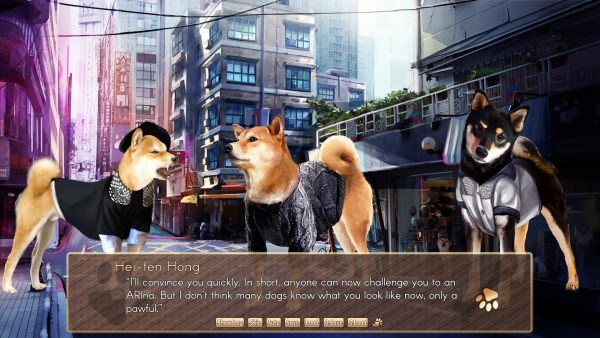 The island’s reliance on technology seems to have made the dogs overall weaker and, along with the ARInas, goes a long way in isolating them to a degree.The tech, mostly smartphones and computers, make canine instincts redundant when you can just track a dog via his cell phone signal.This also shows up in the ARInas where they rely more on tools and trickery in lieu of actual hunting skills that dogs should have. In becoming more human like they have lost what made them unique, and they’ve become easier to manipulate.

The dogs’ more human behaviors have in turn made them easier to control via social mores and capitalism. Dogs aren’t free in this world; they are bound to follow this society’s rules. They fight for a good spot in the social hierarchy as puppies and the ones who win fight to keep the system in place and preserve power they have. The ones that don’t fight work jobs and are too busy to think about such things. A few paths in the game show Syd reluctant to give up her power as top dog. As much as she hates the privilege and position, she covets it at the same time.

The anti-fascism bent the game takes is hardly subtle but honestly in the current climate of political unrest, it’s poignant. The various paths that Syd can take all have their ups and downs but the ones where Syd flees the island have a certain selfish bent to them. Syd and her brother flee the island and make a vague promise to return to set things right. It comes across as avoiding the problem rather than an actual sincere promise. It’s pushing the idea that as someone with the power to change this system, Syd has the moral obligation to do so. So even if she makes peace with her past and flees the island, it rings hollow since it feels like she’s not looking at the bigger picture. Whereas those endings where she is able to make the sacrifices necessary to change the system feel more complete whilst also allowing Syd to heal from her past traumas. 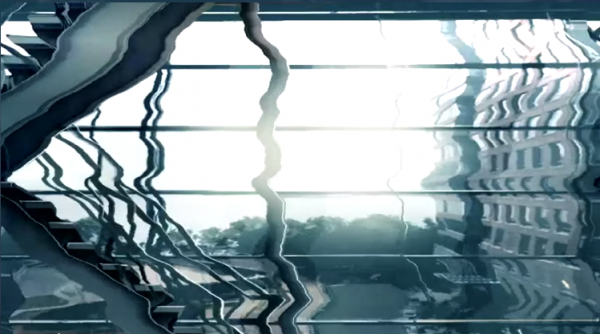 The game’s clash of darker themes and cute dogs is bizarre to say the least but by the end I  was drawn in to the point where the silly looking dogs did not take away from the horrid events going on. One of Syd’s toughest opponents is a fat shiba in a yellow jumpsuit, yet she manages to be the most terrifying dog in the game. A sadistic creature that toys with her opponents and undermines their grip on their sanity. Yet not one time was I taken out of the experience by either her ridiculous get up was or the poor effect of turning a dog sprite upside down to indicate being bound.

A Summer with the Shiba Inu is a harsh critique of society wrapped up in an adorable animal package. I was promised at the outset a fun adventure about a doggy finding her brother instead I was treated to a worrying amount of emotional trauma and dog torture. The game is not afraid to show its fangs when it comes to its anti-fasisct themes yet keeps a muzzle on concepts inherent in the setting like eugenics and the more specific details of how the ARIna institute works. Maybe a sequel or side story could better expand these themes better. I still had a barking good time regardless.

Tags: A Summer with the Shiba Inu
← No Rules, Skate Everything
Due Diligence: The Mass Effect Andromeda Trilogy, Part IV: Space Guns →