No Rules, Skate Everything

The year was 1999 and fans eagerly watched as Tony Hawk would have his turn at the vert event at the Summer X Games in San Francisco. Everyone watched as The Birdman carved up and down the half pipe, there was a sense that he was working his way to big. With every passing moment, the crowd grew more impassioned. Fellow skaters stood by, performing their own sacred rituals hoping for something amazing. Tony went up the two verts, gaining momentum, until the time was right. In one moment he spun around two and a half times in the air, landed, and remained on his board. The crowd exploded in a burst of energy! Reporters, fans, and competing skaters all charged Tony, yearning for just a couple of words from the man who did the impossible. Only a few weeks later would Tony Hawk’s name become synonymous with the skateboarding video game genre. Tony Hawk’s Pro Skater set the bar so high that it still resonates as one of the best skateboarding games of all time. The 1999 hit remains as a staple even when sized up to today’s games. As we eagerly await the arrival of the Tony Hawk Pro Skater 1 & 2 remakes, let’s explore how this franchise became the biggest, most influential skating game since 1987’s Skate or Die.

In 1997 arcades were still profitable and filled with immersive experiences that most people could not have at home such as Sega’s Top Skater, an experience that is still considered quite unique. The cabinet featured a skateboard that swung from side to side and tilted, with two arm-bars that helped the player move the board back and forth. According to an article from Retro Gamer Magazine (no 131), this title acted as one of the main influences behind the creation of Tony Hawk’s Pro Skater: The Neversoft team frequented a bowling alley near their studio, where the team would play and study Top Skater. 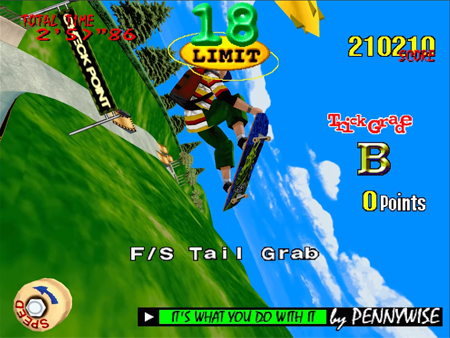 Top Skater is a racing game that allows the player to make tricks along the course. A clock counts down as you traverse the course and attempt to rack up as many points as possible. You collect rings along the course in order to extend your time as well as hit various checkpoints in order to stay in the game. The big downside is only being able to perform tricks when you hit ramps and verts. Getting close to the lip of the ramp or vert executes the trick. That is, if you can stand on the board and properly handle yourself. After years of wear and tear, most Top Skater cabinets would eventually suffer from being overused. This has often caused these cabinets to become inoperable for long periods of time as they await specialized repair. Neversoft’s goal of creating a successful video game needed to focus on the basic concept of bringing the skating experience from the arcade into your home in a way that would be available all the time—but they weren’t the only ones looking to do so.

It didn’t take long for EA Games to recruit the developer Atelier Double to make their own skateboarding game. In October of 1998, Street Sk8er took to home consoles and saw fairly wide success. Street Sk8er mimicks the gameplay of Top Skater in many ways, but the predominant success of Street Sk8er lies in the form: it doesn’t require a huge arcade cabinet to enjoy it. Controls for Street Sk8er are quite simple as well. The press of the “X” button and a direction results in performing tricks, but you don’t control what tricks would be performed. Each trick is random, and using the same direction multiple times in a row yields diminishing returns. Just like Top Skater, the tricks can only be performed as you approach the lip of a ramp or a vert. The tricks themselves are always over the top, and absolutely unfeasible. For example, one trick has the board spinning around at such a velocity that it would cut a tomato if you were to throw one at the skater. 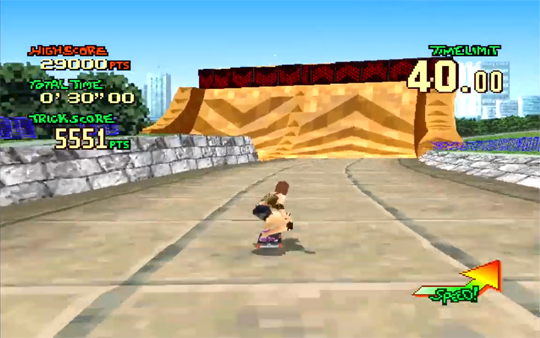 Top Skater and Street Sk8er have a lot in common, despite being totally different gameplay experiences. They both even embrace the punk rock soundtrack, introducing many others to bands like Pennywise and Less than Jake. Both games developed a popular cult following. People who never really played skateboarding games had both of these games as their introduction into the genre, and they performed rather well until Neversoft changed the landscape.

On August 31st 1999,two months after he landed his legendary 900, Tony Hawk’s Pro Skater was released to the world.  At the first drop into the warehouse, the game’s first level, you can tell immediately that this game has something special. The warehouse set the precedent for Neversoft’s new style of level design for a skate game. Street Sk8er and Top Skate had exclusively featured downhill courses, but Tony Hawk introduced open environments that you could traverse freely. In the Tony Hawk world, everything is a ramp or a grind rail. Everything is a tool for executing moves and trying to create the perfect line. Ramps, curbs, rails, planters: they all give the player an opportunity to do something cool. At times the environment can feel a little strange, with randomly placed ramps and verts in places that didn’t make sense. To be honest, I never bothered to question why a snaking half-pipe would be placed in the middle of a California high school. The environment lends itself to creating this immersive experience by presenting not just traditional skating ramps and verts, but also including natural elements such as park benches and planters.  The levels feel completely authentic because the player sees them through a skateboarder’s eyes, where every piece of the world is an opportunity to set up a trick. 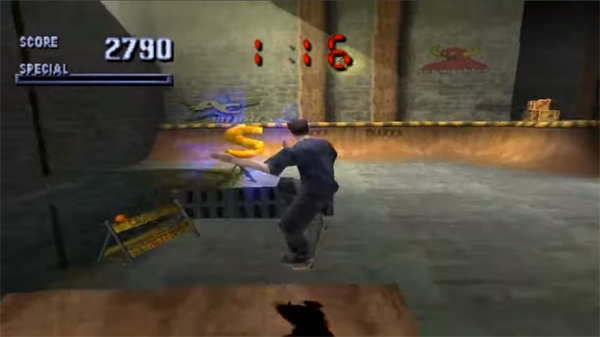 Performing tricks was perhaps the biggest change to the genre that garnished the warmest of welcomes. In a truly amazing design move, Neversoft gave players full control of their tricks. Instead of the simplistic single button presses of Street Sk8er’s engine, Neversoft gave each face button their own trick category.  This created a more spontaneous style that allows players to feel more free in their decisions.  Each run felt more unique, and even though you might be going for a certain goal, the path to obtain it was never the same.

What good is an environment and an array of tricks when you don’t have things to do? Tony Hawk’s Pro Skater embraces skater culture within the design of each level’s objectives. Instead of attempting to get a high score like in Top Skater, players complete tasks around each level in order to obtain VHS tapes. These tapes acted as a currency that would open up the gates to more levels and more skate decks. The objectives include things like finding the secret tape, getting a high score, and finding the letters “S.K.A.T.E.” You get two minutes to complete one or more of these tasks. Unlike the more bare-bones style of Top Skater and Street Skater, Tony Hawk’s Pro Skater allows you to tackle all of these tasks in any order of your choosing, further fitting the theme of freedom.

Neversoft put together a game that challenged the status quo of skating games. Playing it as a kid, there wasn’t a time where I felt like I wasn’t having fun. Even when I had a bad run or couldn’t complete a certain task, I knew that I could go back to it later. Granted, it did get frustrating at times, especially when I couldn’t get the extreme high score. Knowing that I could go back and try again while still progressing was something I appreciated. 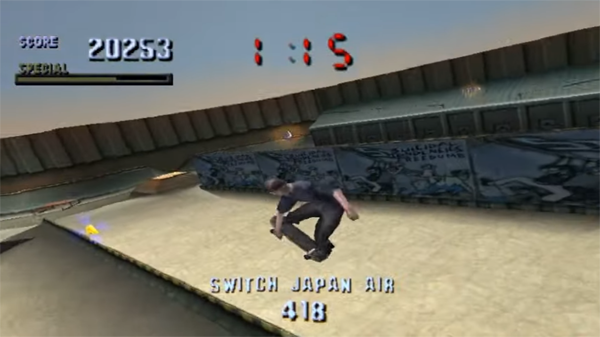 As I was writing this piece, I decided to go back into Tony Hawk’s Pro Skater yet again. Five hours after I loaded the game up, I found myself still under the magic that Neversoft conjured. I could still feel the influence from those past titles reinvigorate my love for the genre.  I found myself reflecting on the camaraderie that I used to have when my friends and I got together and fought for the best line or the top score. Everything about Tony Hawk’s Pro Skater was a testament to a culture that always had a rebellious following. It was an homage, it was paying respect, and it opened the door to real life skating for people whose only experience was this game. If people didn’t know who Tony Hawk was, they definitely knew after this game hit mass appeal.

As we get closer to the release of the Tony Hawk Pro Skater 1+2 remake, my excitement grows. Is it the nostalgia that hits me and reminds me of my younger days? Of course, but it is much more than just reliving the experiences of my past. It’s that feeling of rolling down the ramp into the warehouse again while listening to Goldfinger’s “Superman.” It’s going through the Mall and pulling off a trick over the escalator that should break my ankles upon landing but doesn’t. It’s feeling like a skilled skater when in reality I am a 34 year-old, out of shape dude. Tony Hawk’s Pro Skater made everyone feel like the Birdman, Bob Burnquist, Chad Muska, or any of the other skaters within the game. Tony Hawk’s Pro Skater was all about one thing: feeling cool; and man did this game make me feel cool when I kickflipped off the high school, landed a 50-50 on a planter, and jumped into a 360 shove-it.

Steve Esposito (@agitatedstove) is a New York based writer with a passion for gaming and tabletop RPGs.  You can find more of his various articles in his portfolio over at StevesGamingCorner.com.

Tags: Street Sk8er, Tony Hawk's Pro Skater, Top Skater
← Afterparty and the Tedium of Eternal Consumption
Off the Grid: A Summer with the Shiba Inu →