Off the Grid: A Look Back at Assassin’s Creed, Part 2: Brotherhood

Lockesly Winters is a master of suppression.

AC2 was all about Ezio growing from a child to a man while embroiled in a conflict he didn’t fully understand. Brotherhood, on the other hand, sees Ezio coming into his own identity—not just as a person, but as a leader as well. The game adds the requisite sequel content: New weapons, moves, characters, etc. However, these are not new just for the sake of more content; these changes transform the game mechanics in ways that show Ezio is finally the one calling the shots. This aligns with the narrative in which Ezio seizes control of not just the city of Rome, but his own life, even learning more about the generations-spanning conflict he’s involved in—while in contrast, his descendant Desmond loses control of his own story.

The previous game ended with Ezio eschewing his desire for revenge and sparing the Pope Alexander VI, realizing that no amount of murder will bring back his family. His bizarre dealings with an otherworldly entity have put his life in perspective; he’s committed to focusing on the family he has left and leaving the life. Unfortunately his actions have drawn the ire of the Pope’s hot-headed son,Cesere, who sees Ezio as a threat that needs to be eliminated.  An attack leaves Ezio without a mentor to guide him, and he steps up to rebuild and lead the leaderless Assassins of Rome. All that hero’s journey goodness is here and accounted for, which is not a bad thing. The story is told well and Ezio’s character development is tops, even delving back to his youth to expand upon some minor elements from the previous chapter. It takes a character that I already adored and made him even better by giving him a stronger sense of agency.

AC2 gave the impression that Desmond was the one on top, so to speak; it was his narrative and Ezio was just a means to an end. Yet here in Brotherhood, Desmond is falling victim to side effects of using the Animus for so long and is losing himself in Ezio. Desmond finds himself confusing his own memories with those of his ancestor, stuck in modern Monteriggioni (Ezio’s former home turf), and collecting various items—climbing and jumping on rooftops, just like he would when reliving Ezio’s memories.. It’s telling that no one has told him to do this, showing that he’s blurring the lines of his own reality and doing what he would do if he was still in the Animus. Desmond was the weakest part of the previous game but Brotherhood capitalizes on his lack of a will or personality. Desmond begins to feel more and more like the pawn he is, while Ezio evolves from a simple pawn to a deadly queen. The contrast between them is best shown near the end when each man wields the Apple of Eden, an artifact that can control men’s minds. Ezio is in full control of the Apple, using it effectively to dispatch his enemies. But when Desmond finally wields it, he immediately loses control and is forced to stab his love interest. It adds a bit of depth to Desmond, he’s clinging on to Ezio because he doesn’t have a true sense of self. This turns what was just a boring character into a sort of pitiable sad sack…who’s still kinda boring. I’d enjoy seeing Desmond work through this and develop the aim he sorely lacks. As much as I enjoy ragging on him, he isn’t that bad and honestly delving into his personality here and hopefully in later games is something I’d enjoy seeing. Embracing his heritage while also defining his own legacy as an Assassin not unlike Ezio. But I digress, Ezio’s rise to power and Desmond’s lack thereof are a small part of the shift that was made. 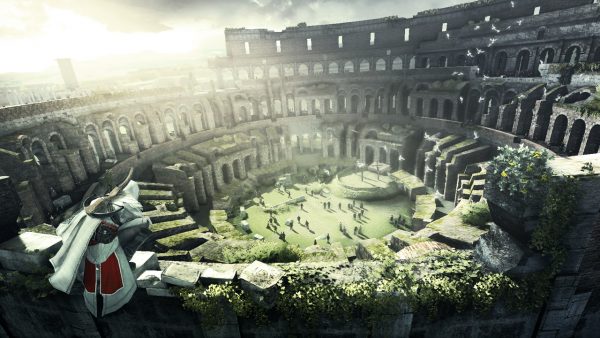 Ezio’s murderous repertoire has been greatly expanded with more weapons and the ability to easily start a “streak” of stabbing guys in the face. However the biggest change is that, as Ezio works to rebuild the fallen Assassin’s brotherhood, he recruits the downtrodden to help him in his cause. This private army quantified in game mechanics as an ability to call them into battle, provided they aren’t away on training missions. It’s like having your own Pokémon team, but the only move they know is murder.

Also revamped is the restoration of Ezio’s homebase, this time letting him rebuild all of Rome as he liberates the city from the Borgias, district by district. Despite the large size of Rome, helping the city is both manageable and meaningful, with rewards such as freedom from guards, discounts at local stores, and access to the game’s best equipment.

It all wraps back into that idea that Ezio is taking control of his life and defining who he is. His touch brings Rome prosperity and a semblance of a better life, which is a direct counter to antagonist Cesare Borgia, who rules through fear and cares little for the actual city. Both Cesare and Ezio want to carve their own paths in life and do so via the city of Rome. Both deal with distrust and possible treachery within their own organizations and both leave the city with a grander goal in mind. However, what sets them apart is how they handle their hardships. Cesare’s own inattentiveness leads his organization to fall apart, particularly due to poor leadership and letting disloyalty go unchecked. On the other side of the coin, Ezio grows an order founded on trust and takes care of problems before they fester. So once Ezio leaves to end Cesare, he leaves behind an order that can stand without him. He is the definition of a great leader and is allowed to leave a lasting legacy this time around.

This game gave Ezio the agency he sorely lacked in AC2, I’m hoping that Revelations can end Ezio’s tale on a high note…please.