Opened World: Men Who Are Boys

There’s a tragic story at the heart of Assassin’s Creed IV: Black Flag, one that only reveals itself just before the end credits. For the vast majority of Black Flag—dozens upon dozens of hours of playtime—players swashbuckle and sail through the sparkling blue waters of the Caribbean as the dashing pirate Edward Kenway. His life at sea is exciting and spirited, and we share in his pleasure as he lays siege to fortified island strongholds and sightsees around uninhabited tropical getaways, unshackled from the confines of domesticity. But then, in the final few minutes of the game, Edward meets his estranged daughter, and for the first time, we come face to face with the reality that these boyish adventures only masked his failures as a husband and father.

Black Flag plays into our familiar, romanticized idea of pirates, in which Kenway serves as a paragon of roguish masculinity tied down neither to nation nor family. We attribute such archetypal figures with romantic ideals of freedom, youth, and adventure. When we think of pirates, we often think of alluring, wisecracking men from the Dread Pirate Roberts to Captain Jack Sparrow, but pirates are of course seedy, opportunistic criminals. Black Flag portrays Kenway as rugged and sometimes brusque, but also as a winsome, principled outlaw. With his scraggly beard and tousled locks of blond hair, Kenway resembles the easygoing, wiry surfers I see cruising around Southern California, saltwater drying on their skin. He looks like a stand-in for Chris Hemsworth in Thor. He could be an illustration for a romance novel. And yet, Edward Kenway is not a man, but a boy. He is a boy playing pirate, escaping his responsibilities as husband and father as he lives a fantasy across the ocean while his partner Caroline must live the reality of financial hardship and his abandonment. 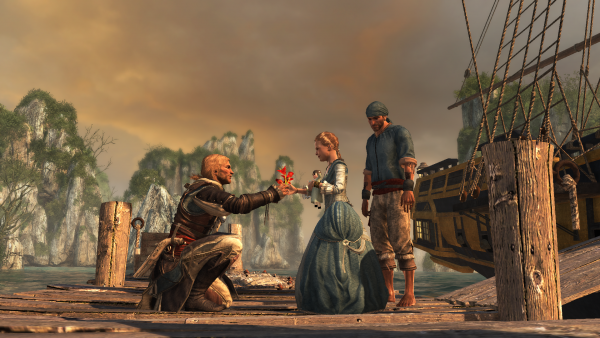 In flashbacks, we learn that Kenway and Caroline’s marriage was met with familial strife. Of a lower-class background, Kenway never found approval from Caroline’s moneyed father, and so the couple wed without dowry and struggled to enjoy a comfortable life. These persistent financial woes serve as Kenway’s initial motivation to leave Caroline for employment with privateers abroad, reassuring her that he’d only be away for two years at most. Kenway yearns to lift himself and Caroline out of poverty, but in the process of chasing after fortunes, he falls into a more appealing swashbuckling life away from home. Flashbacks are presented in faded colors of ugly grays and browns, a marked contrast to the oversaturated and vibrant colors of the Caribbean’s utopic Republic of Pirates. By the time we first encounter Kenway at the start of the game, he’s all but forgotten about Caroline. His daughter, Jennifer, is the one who chews him out in a sudden, sobering confrontation in the closing minutes of the game, disclosing that he only wrote once a year and that he never knew her. This scene thus recontextualizes Kenway’s narrative arc, suggesting that his entire foray as a pirate is meant to escape the domestic anxieties that await him in England. In a sense, Edward spurns his responsibilities as a husband to Caroline and a father to Jennifer because he is running away from home.

The end of Black Flag represents Kenway’s final embrace of the domestic as he sets sail on a long-delayed return trip to England, and more importantly, it signifies his realization of his basic responsibilities as a father to his child. But it’s too late, of course. These lessons arrive only at the expense of a woman’s life, taken by a disease so far away from Kenway’s care and aid. Her tragic, solitary life and death serves as a troubling conclusion for a story in which Caroline must raise her child alone while her absent husband cavorts in paradise. He leads a privileged life of adventure, and his lack of financial and emotional support costs her a stable support system and her life. 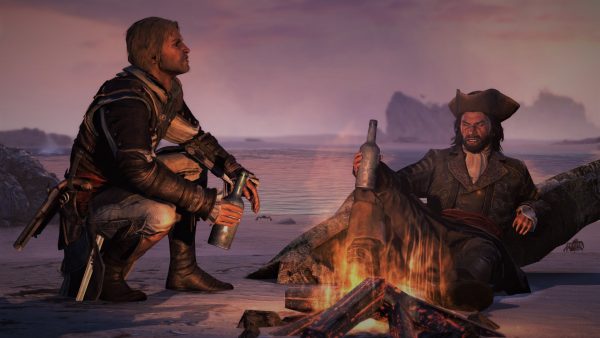 So many games in the Assassin’s Creed franchise tell tales of overgrown boys and the problems they avoid. Its most famous storyline, the Ezio trilogy from II to Brotherhood to Revelations, chronicles its hero’s life from mischievous teenage years to the quietude of old age. We grow up with Ezio and witness his arrested emotional development after his father and brothers are murdered, cutting short a normal life. Ezio busies himself with a quest for vengeance, and like Kenway, he doubles down on his roguish behavior for lack of stability. Interactions with antagonists always feel playful and carefree, often accompanied with dashing one-liners. Ezio womanizes and frolics across Europe, radiating a devil may care attitude because he lacks loved ones truly dependent upon him. While the murder of his male family members may have initially fueled his revenge campaign, it also permits him to live unshackled to the burdens of family obligations, free to live a bachelor’s life of leisure and play.

Assassin’s Creed III is one installment that features a fully-grown adult man in Ratonhnhaké:ton rather than a boyish rogue. Some players disliked that protagonist’s seriousness after spending three full games with the easygoing, charismatic lothario Ezio, but Ratonhnhaké:ton radiates a stony maturity because circumstances force him to do so. His mother was taken from him at a young age when George Washington’s forces burned his village, and so this backdrop of indigenous genocide robs him of his childhood. As white men, Ezio and Kenway are privileged in that they can delay maturation and get to be boys, while others like Ratonhnhaké:ton cannot. These are narratives that exist in real life too, where white teenagers enjoy the privilege of reckless boyhood while people of color, especially Black youth, are aged beyond their years or must negotiate a social landscape where the label “boy” carries different, negative connotations. 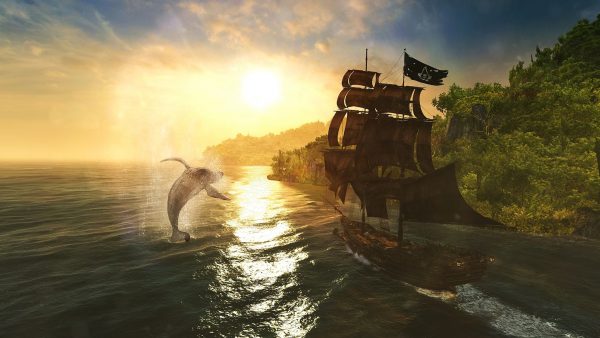 To be a boy is a privilege. In the Assassin’s Creed series, those who must step up and act as adults are women like Caroline, who dies under the weight of financial ruin and emotional isolation, or men like Ratonhnhaké:ton, who must be an adult because historical circumstances of colonialism and violence against indigenous peoples force him to do so. Kenway instead makes the choice to be a man who is a boy, and this choice has its consequences. Throughout Black Flag, players marvel at beluga whales leaping out of the water or pursue enemy ships through violent squalls, their outlines illuminated by thundering cannon fire through fog. These alluring sights captivate Kenway and enthrall the player, but this grand spectacle disguises the suffering of characters like Caroline, who pays the ultimate price of his boyishness, offscreen and across the Atlantic.

Tags: Assassin's Creed, Assassin's Creed Black Flag
← The Miracle Animal and the Pale Inside: Existential Thought in Disco Elysium
Off the Grid: A Look Back at Assassin’s Creed, Part 2: Brotherhood →