I first played Assassin’s Creed, a game that I’ll get to after every game that came after it, at a friend’s house in the far flung past of 2008. Although I thought it was cool, I never had the time to become engrossed in it myself.  The game was wildly successful and thus we got Assassin’s Creed 2, which I ended up renting from a Hollywood Video (a sentence that is truly showing my age), because my friend was too busy playing Dragon Age at the time. I was interested due to a burgeoning love of Renaissance Italy and a lifelong passion for making ridiculous jumps. I played it for hours searching for necks to stab and feathers to collect. In a vain attempt to recapture that glory, I’m looking back on the series now as an adult trying to see what I saw in the series, and at the time of writing it seems like I’m left with disappointment.

Assassin’s Creed 2 is, in a word, clunky. Controlling local Italian eye-candy Ezio is meant to feel smooth with all his more acrobatic moves happening automatically while free running. The problem comes when Ezio and I have differing ideas on what we want to do, a situation that recurs regularly. I want to run up the boxes in front of me and Ezio would rather skewer himself upon the local guard’s sword. This desync between Ezio and me leads to nothing but frustration as the fast-paced gameplay slows to a halt as you attempt a section over and over because Ezio just doesn’t want to be a team player. This could probably be forgiven if AC2 wasn’t a collect-a-thon platformer masquerading as an open world game. Climbing high and pulling off the platforming sections is rewarded with various doodads that unlock more money or pieces of equipment but, other than climbing towers—which are straightforward upward treks—it’s not fun. I skipped most non-assassination side missions because I didn’t want to have to deal with the poor controls. Even those assassinations felt all for naught as money is only worth using to upgrade your family estate, which in turn gives the player more money to spend on more upgrades—with the only worthwhile upgrade being a suit of armor you get for free.

The opening sequence does an excellent job of teaching the player everything they need to survive while letting the player get a great idea of who Ezio is as a person. From beating up a friend’s cheating boyfriend, a teaching moment for fisticuffs, to showing off how to evade guards via running from his own lover’s angry father, this opening section conveys a lot of important tutorial information. It feels smooth and shows that the game is aware of how to teach the player without being too blunt. This sequence helped really endear Ezio to me; the story really drags him through some shit and I honestly felt bad for the guy. He wanted to live his life to the fullest but it was all ripped away as he is thrust into the role of an unwitting pawn in a conspiracy that, even by the end of the game, he is denied an understanding of. Also helping draw me to him is that he’s sexy as hell… moving on. 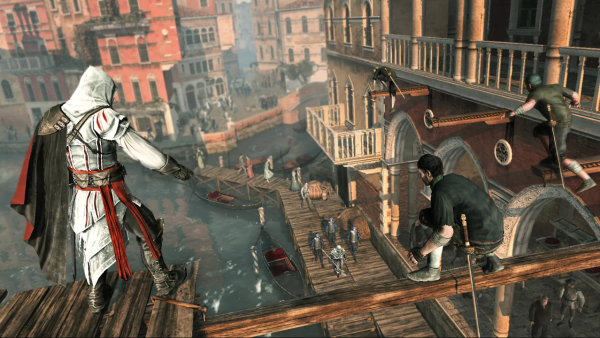 The story itself is standard revenge fodder: family is dead, Ezio wants to avenge them and figure out why they were killed, but by the end he realizes that all the killing won’t bring them back. All the villains are power hungry morons that make sure to kick every puppy they see on their way up to the top. Does it make for a compelling narrative? Not really. Is it fun to stab them? Yeah. Not helping the case is the narrative’s constant timeskips with no indication that time has passed save for Ezio’s beard growth. It never feels like time is going forward; the settings for each major section stay static no matter how close you are to stabbing the right person. Despite the fact that most sequences span anywhere from one year to almost ten, it feels like nothing happens till you kill the arc villain and then, boom, you’ve jumped ahead 2 years in a town that hasn’t really changed despite a handful of political upheavals.

AC2 is a game that’s concerned about the overarching narrative but spends so much time developing Ezio and his story that it feels like a slog to come back to Desmond and crew for the rare times that happens. Ezio’s character growth into a man and search for answers becomes infinitely more interesting than a conspiracy involving the birth of humanity, which is probably a mis-step on the developers’ part. Ezio is tossed aside once he reaches the exposition part of the story with a celestial being. This character speaks directly to Desmond while leaving Ezio in the dark despite him doing all the metaphorical and literal leg work. It all reeks of a story that has all this development of your lead only for it to not matter in the slightest because he’s not “important” enough to warrant knowing anything.

I’d feel remiss to not mention the highlight of the game: the present day sections with professional Adam Sandler impersonator Desmond Miles. Desmond is dull, whiny, and yet somehow a little likable with just how much of a loser he is. These sections expand upon the “Bleeding Effect” that show-off  Desmond’s time in Ezio’s memoires are passing along those assassin’s skills. It’s still boring as all Desmond is doing is using his fancy new assassin’s skills to flip some switches and awkwardly flirt with pretty girls. We learn nothing about this part of the cast and we’re left with a boring unlikable crew. Wait, wait, I liked Shawn; he’s a jerk to Desmond and that’s all I need. 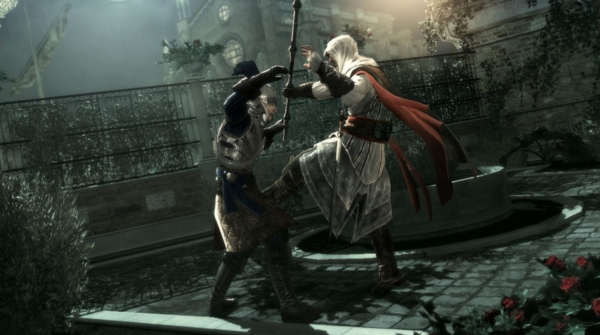 I only really came back to this game to see if it was as good as I remember and maybe generate a little serotonin in the meantime. The burgeoning love for Renaissance Italy is gone though not entirely forgotten, replaced with joking to hide that I’m dead inside… though the love of sweet jumps remains intact. AC2 has the player get to know and love Ezio, giving him a strong character arc all to lock him out of the information that would have given him solid closure. Instead it snaps back to the modern day plot which is sitting in the corner playing on its gameboy and expects the player to give a toss.

I never came back to Assassin’s Creed despite loving this game when I was a teen. I would go on to play a small bit of the 3rd game but that was it. However now I’m back to see what I missed while I was gone, which apparently a lot; going by the the company that I keep that I sometimes pretend to respect. So in that vein I’m going forward, flying blind on a rocket unicycle, holding out that Ezio may have some actual closure. Also time is an illusion anyway, so talking about the first game will come whenever it happens.