This year has been rife with catastrophes—turbulence—and narratives of survival feel more urgent and necessary than ever. I’m going to talk about Death Stranding and The Last of Us Part II. While post-apocalyptic scenarios are no novelty, in the case of these two games in particular, I’m more interested in ways of coping with the cataclysm they propose. This text is a side-by-side comparison of two different strategies of social survival. First is the way of DS, the utilitarian post-death world that works like a well-oiled machine, and where the market is the only thriving survivor. Second is the way of TLOU2, where in a segmented and dispersed society, small clusters of survivors live by their own set of rules, morals and worldviews. Even though these strategies seem to be on the opposite ends of the spectrum, there are still some points where they meet.

The whole world of DS is defined to its core by death. It’s incorporated into nature—with timefall, rain that accelerates decay, and ghostly BTs that creep from the ground. We play as Sam Porter Bridges, and as a repatriate—one of the few immortals who can come back to life—he knows death very closely.

Yet in DS, death is a matter of logistics. Dying is not really a threat to the protagonist, it only disrupts the processes built around it. Death is utilized to more productive ends: farmers use timefall to grow crops and brew beer faster. Death is just an inconvenience—an operational cost— for the undying courier determined to deliver goods, to fuel the exchange of things with his own blood, to always be reborn only to finish the task.

To understand Death Stranding requires expanding the very idea of death beyond the individual: the extinction of everything that exists. The ruins of previous life are hidden away, thoroughly covered with green plains, lush yet devoid of floral diversity.

This post-death serenity is only occasionally interrupted by the sterile structures of identical looking shelters and isolated distribution centers. The hidden remains of cities can only become visible in close encounters with BTs, submerged in the oily goo of death, an echo of the buried trauma. 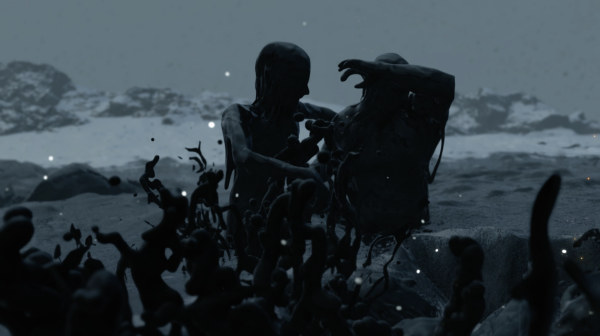 In The Last of Us Part II, death is always around; everything is hostile and out to kill us. Continuing the story from the first game we play as Ellie, but also as a newcomer named Abby; both can die by the hand of a runner, clicker, creeper, Firefly, Seraphite, Rattler, or just another survivor. Violent death is normalized by its constant and graphic depiction, which we get used to quite quickly.

Ellie and Abby are under permanent threat, which is reinforced by the decay of the world around them. There is no new strata developing on top of the ruins of the old world. There is only the slow deterioration of the things left behind, survival mode imposed on the whole world .

Everything is no more.

Everything is about what it used to be.

Everything that exists under the timefall has a utility, a purpose. And everything without a purpose has perished.

Every object is a resource, most often designated for someone else.

Yet among the things Sam delivers there are some packages that hide objects of sentimental value in those identical metal cases. Objects that are revealed only in name: from books to kitchenware . Objects that do not participate in Sam’s life, nor our enjoyment of the game, but only in statistics. In the sterile world of DS one wonders:

How does Ludens Fan store the figurines he collects without leaving his shelter? Does he have a special showcase for them? What are they worth? Is there ever growing demand for collectible items in the post-death world? Or is he collecting them out of pre-extinction habit?

In the detritus of the post-cordyceps world there are only a few things that we can put to use. While the matter that constitutes the world of TLOU is basically debris on the scale of the country, objects feel earned, salvaged, scrapped together, and most are spent on survival almost as soon as they’re found. But there are sentimental things here too, things worth keeping. When Abby and Ellie collect their coins and cards, they are doing this off to the side of their journey. This is a small personal touch, a connection to normality, to a time when some things just didn’t have a purpose.

Even in a new type of game, a strand game, a bullet is still the answer to almost everything, even if they’re bullets of rubber or blood. Antagonists are treated as inconveniences that require solutions, collateral damage of this regime dictated by the circulation of goods. MULEs are portrayed as violent though non-lethal, akin to delivery drones stuck in a delivery cycle. Motivated by compassion, or maybe sensing some similarities with the protagonist, we don’t kill MULEs, but rather incapacitate them.

With the upgraded enemies we get the instant excuse to be more ruthless, as they are terrorists. So we are allowed to not feel guilty if we kill them, accidentally or on purpose.

Killing solves the problem of these enemy encounters, but it creates another problem to solve: dispose of the bodies to prevent the appearance of BTs. After all, the materiality of bullets doesn’t really matter: Sam’s task is simply about risk and resource management when solving this problem. So instead of dying, the terrorists endure constant problem solving.

Violence here is somehow the only means of survival. Because there is nothing else but survival, violence becomes the only way of life. The few peaceful moments seem to be so far removed from the constant gore and brutality, but they are ultimately short-lived and we are sucked back into the same vortex.

Fighting our way through the multitudes of enemies, it’s only logical to ask what this is all for. The glimpse of peaceful living is rapidly slipping away. As most people we encounter can quickly die, the killing itself becomes a form of logistics. Human life is abrupt and has little worth. When we witness our enemies getting called by their name, a moment away from their end, this lack of value is orchestrated to bear special significance, and the automatic killing is violently put into perspective. There are no negotiations, there are no solid peace treaties.

Brutality is promoted to politics.

Everything is different shades of hostile.

Over the course of the game I kept meeting two other porters. We’ve exchanged some likes and goods before getting back on our own way. What puzzled me is that whenever I met those porters, they had the same amount of likes from our last encounter. So are there only 3 porters in this world including Sam, which is sad, or do I meet the idea of a porter rather than a particular person? Both options create this clash between the vast, unraveled world and the matter of human labor. If there are indeed only two other porters, if they represent all the players helping to build roads and ziplines, then they are overworked. If they are representing the porters as a workforce, then there is another clash between the service and the lack of the consumer of this service.

When I call out into the empty space, others call back.. Other Sams, identical to mine, only differing in their delivery person career. Sam is overproduced as everything else.

Even though Sam’s mission is to rebuild and connect disparate communities—or more often the individual hermits they call preppers—into a state-like structure, we can communicate with others via the chiral network and benefit from structures built by other players.

The communities are a byproduct of the maintenance of the market, emancipated from inconveniences of death. The country is being rebuilt and reshaped as the result of Sam’s contribution to the flow of goods, in a new market capitalism where material consumerism has outlived even the end of the world.

The world of TLOU is not interested in patching up society as a whole, it doesn’t burden itself with that, as we already knew going into Part 2. The surviving communities have conflicting interests and clashing values; moreover, they live in their own discrete bubbles among the ruins of the old world. They settle for what they have. The only things that they share is the danger lurking beyond their walls.

There is no common ground to build upon, when the world lacks a sense of belonging.

Community is already compromised when

Ellie has no place in Jackson

Abby has no place with Wolves

Lev has no place with Seraphites.

These communities are part of the same ruins: flawed and unsustainable. The ruin that keeps reproducing itself: behind the fences of makeshift cities, in the sports stadiums repurposed as military camps.

Not only debris is recycled, but also some questionable ideas.

Travel is pointless, sporadic, chaotic. It’s only defined by local and immediate needs, dictated by the exchange of goods. Sam travels back and forth from one distro center to another, within a repeating landscape, and the homogeneity of the landscape and architecture translates into the unspoken hegemony of a single country. Although Sam’s mission lies in connecting isolated shelters, the chiral network does not connect them to the rest of the world, but only pushes borders a bit to enclose new actors into the same system of exchange. There is no linear path, even when we go from coast to coast, we are still zigzagging our way through, as if just drifting on the waves of the post-apocalyptic market.

Travel feels pointless in the end although the continued change of landscape, weather, and environment convinces us otherwise. This constant movement only depletes our physical and moral resources, without letting us settle even for a bit. The characters are like driftwood fallen off their fragile communities. They wander through what remains of the USA, until they find themselves at a dead end, with no place to return to, and nowhere else to go. This is one of the effects of a world that has been stripped of its meaning, where everything is distilled to mere survival, so life becomes the surplus to spare: invest into the meaningless quest for revenge, or waste the lives of others.

Death Stranding is trying to sew the world together, by establishing knots in a network of outposts that shore up the market driven economy through routinely exhausting actions. In The Last of Us Part 2, Ellie tears through the social fabric of deteriorating relations, eliminating every possible knot on her way.

DS is when there is nothing else to do, and people put death into service in order to distribute brand-name beer. In this world humanity didn’t survive the fall, but the market did. In DS there are workforces. In TLOU there are families: fractured into smaller communities, society remains on the precipice of radical atrocities. Two different routes that somehow bring us to the similar kind of outcome. Two dehumanizing political regimes. Two models of what is deemed to survive the death itself: cannibalism and capitalism.

Tags: Death Stranding, The Last Of Us Part 2
← Due Diligence: The Mass Effect Andromeda Trilogy, Part V: Stuff Games 2: Electric Boogaloo
Off the Grid: A Look Back at Assassin’s Creed, Part 1: Assassin’s Creed 2 →