It is unsurprising that Mankind Divided is overshadowed by the legacy of the original Deus Ex (2000). Few videogames are best remembered for their marketing campaign, however. Mankind Divided is burdened with an expectation to fill gaps in series canon, with largely pre-defined themes (global domination, posthumanism, emotional isolation) that together leave little room for new material. The choice of subject matter is typical for Triple-A development, prioritizing continuity and similarity (or, perhaps, an audience expectation for such) in the absence of compelling reasons to do so. Mankind Divided suffers from the series’ proclivity for antagonists who – despite their power, influence, or secret society involvement – amount to mere business executives, with personalities to match. The question of how Manderley got the top job at UNATCO (for example) is pure banality, irrespective of your familiarity with the character.

Even under these circumstances, the script is exceptional. While Adam Jensen lacks any real personality beyond the base affability required of RPG protagonists, even he occasionally resembles a human being with a sense of humor. Mostly, though, Jensen simply voices skepticism, which tends to be reasonable given the targets at hand – it’s not paranoid to distrust the revolutionary ideologue who dominates TV with extended speeches in his own compound, the media conglomerate whose news program runs across every screen in Prague, a police force that seems to equal the civilian population, or the anonymous hacker central to the Illuminati resistance. Everyone in Mankind Divided will eventually turn against you – except, of course, the squad leader with a chip on his shoulder, whose hostility dissolves under the shared value of Getting Things Done. Upon reflection, though, Jensen accomplishes surprisingly little: Mankind Divided is so busy setting the stage for any number of sequels that it neglects its own plot in the process. The better part of the game is spent investigating a train station bombing so unimportant that tracking down the bomb-maker – your only lead in the case – can be abandoned in favor of peeking into a vault with potential links to the original game. The issue of human augmentation, upon which Mankind is so Divided, rarely feels relevant. Societal collapse is deferred for another game.

Mankind Divided‘s design and chosen subject matter distill the series to its surface content. If the plot is stifled by expected links to a predetermined past and future, the incremental changes made elsewhere are less comprehensible. Jensen’s new, ~experimental~ augmentations – slow time, knockback, temporary invulnerability, short-range teleport – are surprisingly unadventurous; they bring other games to mind rather than helping Mankind Divided develop an identity of its own. Indeed, the game’s most distinctive feature emerges through level design: the endless array of electronic locks, and the cumulative XP rewards associated with their defeat, make Mankind Divided feel like a hacking minigame with an RPG attached. Even the inclusion of a crafting system appears to serve largely as justification for Mankind Divided‘s extensive collection of locks; generic “crafting parts” are the booby prize in every abandoned apartment, storage room, and sewer detour. The game’s spaces are simply too large to be meaningfully populated. The result of all this is an immersive sim that’s clearly identifiable as a Deus Ex game – but the original game wasn’t interesting because of augs, conspiracies, or trenchcoats: Deus Ex felt new and ambitious, and that was exciting. The (likely external) requirement to make a Deus Ex game in this particular way – with air vents and unethical science and 9mm pistols with laser sights – ultimately prevents Mankind Divided‘s design from following through. 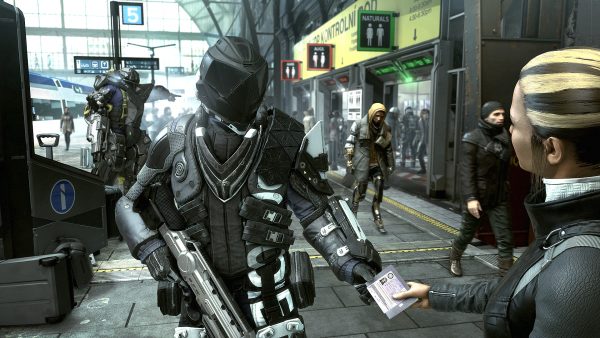 Human society is presented here as a largely undifferentiated mass, pulled into line by the influence of global monopolies in journalism and medicine. Given the (real-world) history and public profile of media effects research, Mankind Divided‘s disinterest in forming a critique of entertainment media seems somewhat out of place. Indeed, the game features more wall safes hidden behind paintings, or elaborate secret rooms with access controlled by some nearby widget, than videogames, sports, or soap operas. (The entertainment value of the game’s worldbuilding books, whose viewing rewards XP, is somewhat dubious.) Mankind Divided is unable to represent entertainment media without indicting itself: Deus Ex is about being a technocool cop with access to knowledge, state authority, and technology magic – a combination that ultimately proves disastrous in the wrong hands (i.e., everyone else’s). As part of the military-entertainment complex itself, Deus Ex can offer no meaningful critique of its subject matter; it takes potshots at the Illuminati instead.

Naturally, public critique of the richest and most powerful players in your own field, however mild, would reflect poor business sense. Outside of their involvement with Mankind Divided, Square Enix now publish more than a dozen mobile games each year. Most releases scavenge the company’s back catalogue, in the form of ports, remasters, remakes, or remixes. Their more recent efforts to jam Final Fantasy characters into the gacha RPG format are pure nostalgia, recalling the visual and narrative qualities of Final Fantasy V. Blizzard went from using dated pop culture references in World of Warcraft to creating entire games (Hearthstone, Heroes of the Storm) based on recycling the pop culture of their own past. Bungie update Destiny 2 by reversing changes that differentiate the game from its predecessor. Bioware are about to bet the farm on what looks like the result of a machine learning algorithm fed the last decade of online multiplayer games as input. RPG elements are now a staple of videogame design at large, regardless of the resulting incoherence. Epic produced an indistinct, conceptually barren marketing vehicle in Fortnite, whose current existence is owed to a grafted-on, free-to-play adaptation of the flavor of the week. The success of its Infinity War crossover event is undoubtedly a sign of things to come.

This approach to videogame design corresponds with a broader trend towards convergence in business. Supermarkets reduce competition from specialized businesses through their consolidation in a single building, and internet technology companies maintain a suite of services that cater to Your Every Need. In the same way, videogames themselves are becoming conglomerates, accumulating a series of increasingly detailed modes of play within a single brand. (Blizzard is somewhat unusual in having accomplished this within and across videogames.) The value of a committed long-term audience of players is identical to that of the pre-internet TV audience: relatively stable demographics that allow traditional marketing approaches to function without substantial changes to the formula. 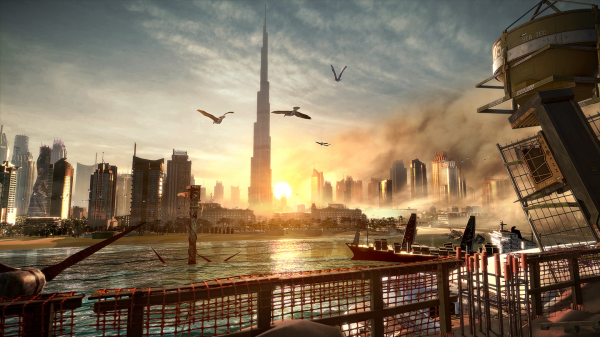 The coupling of regressive, opportunistic design and free-to-play business models that characterize mobile game design is increasingly applied in Triple-A. Hopes that a thriving indie scene would safeguard against stagnation have not been realized; Triple-A doesn’t need an indie scene because it doesn’t need creativity. A preference for the comforts of familiarity and brand recognition reflects the medium’s common use in stress reduction. Videogames will abandon this holding pattern only when it becomes unprofitable; in other words, when conditions at a global level support human wellbeing.

For all Mankind Divided‘s gesturing at the influence of global forces on human society, its attempts at critique are muffled by the individualism inherent to allowing player choice at scale, and the both-sidesism required to make these decisions seem difficult and complex. These heroic ideals infect the wider culture: videogames are important and powerful, a medium for change, the most up-to-date mode of expression and meaning. All this is to ignore the influence of context: Mankind Divided puts the fate of the world in Adam Jensen’s hands (of course, he never asked for it), without ever interrogating his position as a hyper-expensive cyborg working at Interpol. Videogame evangelism likewise commends the medium’s uniquely expressive virtues, eliding (among other things) the influence of publishers, conservative audiences, poor working conditions, and the atomization of Triple-A development such that creative labor is performed by only a few. Mankind Divided shows that videogames can’t change the world – they need the world to be changed.