Due Diligence: Double Down or Nothing

Leigh Harrison prefers spinning the wheels to saving the world.

I’ve got a head cold at the minute. When I’m in this state, I like to take painkillers delivered via hot beverage and settle down with a boring-ass open world game. I find the mind-numbing repetition is pretty good for a headache, like slipping into a warm bath of fetch quests and low intensity combat. And so it was that I purchased a heavily discounted digital copy of the deluxe version of Mafia III. A long, most likely very repetitive game, made longer and even more repetitive thanks to the bundled DLC—just what the doctor ordered!

The game’s core loop is satisfying enough. Just like that Godfather game on PS2, I’m incrementally coloring in a large city map as I forcibly take over districts. My main target is the gangster Sal Marcano, but just like that Mercenaries game on PS2, I can only get to the head of the family by first disassembling his organisation. Informants and lieutenants lead me to racket bosses. Take over all of a district’s rackets and its boss comes out to fight. I’m assuming after killing enough district bosses I get a shot at a member of Marcano’s inner circle, then eventually the man himself. I wouldn’t know though—I turned it off in despair after a half dozen hours. I put buying the deluxe edition down to the fever.

What I don’t understand about willfully repetitive games is why many of them make rolling from one piece of #content to another so difficult. Case in point: after taking over a racket I can perform bare-bones missions to increase the amount of cash it earns for my burgeoning criminal empire. These entail driving all the way across the map, stealing a truck or boat, then driving it all the way back across the map. Simple enough, boring enough, fine—they’re fine. What ruins them is that to begin a mission, I have to drive somewhere and speak to a character, someone who is usually right at the back or on the top floor of a massive building. Once the mission is over, I then have to drive back to them and traverse the giant building again, just to be able to move on to the next thing.

Mafia III is filled with these narrative detours, which I assume are intended to break up monotony and mask the mechanical similarities of the game’s missions. But good intentions like these are what pave the road to hell. A game like this needs to be greasy. It needs to slip and slide me from one thing to the next in quick succession as if it’s made entirely from petroleum jelly. Like with the drinking binges and workplace massacres the game is so fond of depicting, the key to success here is constant forward motion. The likes of Mafia III need to keep us asleep and amenable, for the moment we snap out of our fugue state and realize what we’ve been doing for the past six hours, it’s all over. 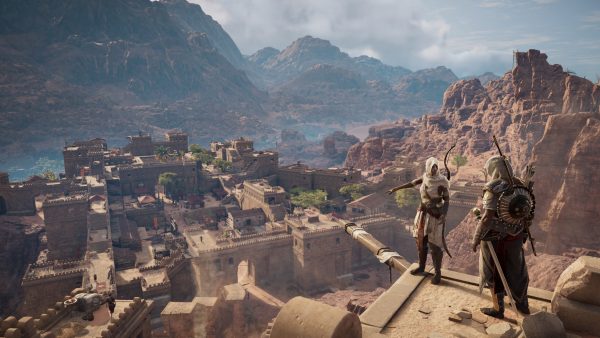 Assassin’s Creed is the absolute best at this. It wants, with its every fiber, to be played every which way. Its worlds are teeming with activities and simple yet gratifying objectives. Missions often take no longer than five minutes to complete and, crucially, are rarely a minute or two away from the next. Everything from character damage and ammo capacity to survivability is governed by XP and ability trees just crying out to be filled. AC is a diamond tipped, pinpoint accurate assault on self control. I found playing Syndicate so compulsively enjoyable that I systematically cleared all of its side quests and enemy camps before even approaching the main game. At which point I stopped because the story missions couldn’t reach the dopamine highs of the game’s copy/paste filler content—a sign of true craft!

Origins takes everything good about the series and supersizes it. Its map is an absolutely huge recreation of Egypt, and so to ensure I’ve never enough time to get distracted, it is smartly filled with over 400(!) bits of throwaway side content. From traditional encampments full of soon to be dead bad guys and finding hidden treasures, to more novel activities like murdering birds and solving riddles, Origins sticks to the AC model perfectly: pile ‘em high and never let ‘em stop. But it’s so damn fun! Instead of boredom, the repetition fosters a sense of connection and familiarity. I develop strategies for different enemy configurations and placements, getting better at navigating perilous situations with every new old activity accomplished. And because the game world is so well designed, because every completed goal sets me a couple hundred meters from my next challenge, I just keep on playing. And playing and playing and playing.

I did pretty much everything in Origins, and then moved onto its first DLC, The Hidden Ones. It was more of the same really, but with bigger camps to clear, tougher enemies to squish, and a whole new list of tasks to tick off in my sleep. It was a wonderful 10 hours. But then came The Curse of the Pharaohs. The curse of too much content, more like. Its whole hook is that throughout the campaign I’m transported to various afterlifes; magical realms beyond the mortal coil, where the restless spirits of fallen monarchs rule for eternity. The first one I stumbled into took me entirely by surprise. As I emerged from a cavern I was greeted by a pristine white city surrounded by sapphire waters and rows of huge statues stretching out past the horizon. There was no fighting to be had, just my slow, awestruck exploration of this new land; familiar in architectural style to much of the earlier game but ethereal in its beauty and tranquility.

Then an icon popped onto my map telling me to kill a massive crocodile for XP and the spell was broken. Just like with Mafia III, narrative killed my ability to continue participating in Origins’ content treadmill. But in this case it was that there wasn’t enough, rather than there being too much. Origins chose to take me, after 80 hours of being just dandy in the real world, to a fantastical nether-realm—I did not ask that of it, it took me of its own free will. And when I got there, it had the gall to present me with the same stuff to do, just this time all the bad guys were ripped Anubis dudes, and there were massive scorpions running around? Admittedly, I was already tiring of the formula when applied to the real word Egyptian setting. But the sheer laziness of transposing the same activities into versions of heaven and hell was too much for me to contend with. Turn it off, lads.

It’s obviously not laziness, though. Games are a series of mechanics and systems all running in sync to create the illusion of something that, if not entirely real, is at least meaningfully interactive. It would be a waste of thousands of hours of creativity, not to mention financially ruinous, to drop one-off scenarios into sprawling games like Mafia III or Origins. So, given conventional wisdom states that people like me love games to go on forever, we get what we can realistically be given. Which in some cases is too much and not enough at the same time. 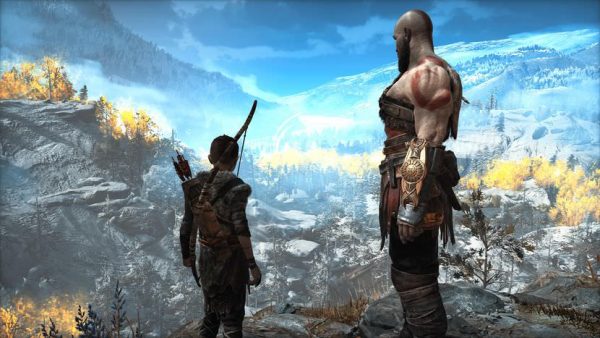 In all honestly, I think I would have enjoyed “game of the generation” (seriously?) God of War much more if I’d just played its story missions. It’s structured pretty much like that Darksiders game on PS3, in that it has a hub world with dungeon-type levels off to the sides. The main quest has you bowling all over a big lake and to some of the worlds from Norse mythology. It’s all very well structured, with key unlocks and upgrades coming to me at predetermined points during the story, making the game’s difficulty curve understandable and consistent. It’s a story with a beginning, middle, and end, and a videogame that adds challenge and abilities consistently over its duration. It’s a God of War game, basically.

This isn’t the case for the optional stuff. Across the board they are all much harder, with enemies able to take huge amount of damage before expiring—many fights are tougher than the narrative’s bosses. Indeed, about halfway through the campaign, I gained access to previously locked areas containing Valkyries. These are expressly, from what I gather reading the forums, intended to be endgame fights so hard they should only be tackled by the most well equipped of players. Why, then, are they not introduced after the credits have rolled? This jump in difficulty is largely predicated on enemies withstanding and dealing more damage. It’s not the sort of thing quick reflexes can, on the whole, counter. I died from a single hit many times while banging my head on these side quests, before just giving up.

God of War exhibits a fundamental misunderstanding of what this sort of filler content exists for—although I hasten to add it is not really to blame. The vernacular of the last decade of game design has stated that “if you can see it, you can go to it.” Games like Mafia III handle this by flattening every experience until everything can be approached in any order—time is the only barrier to success. Origins paints its map with recommended experience levels, and so player damage and resilience increases in-line with enemy damage and resilience (again, flattening), as long as I don’t stray too far from the game’s recommended path. God of War, though, includes side content but actually respects it, and in turn the player, too much. It wants to present additional, optional challenges, not simply mindless busywork to pad out its runtime or sell microtransactions. In this, it is an aberration.

For so long, side quests and challenges have been nothing more than endless lists of “stuff” to do—games doubling down on themselves to give players plenty to busy themselves with. That my first instinct upon seeing a new icon on a map is to assume it’s simply a trivial distraction is upsetting in a number of ways. Am I really this easily pleased? If I know it’s pointless, why am I so intent on doing it anyway? If the endless content churn is my favourite part of a game, what have I become?

Am I a monster? An idiot? Something much, much worse?

To arrest this decline in my cognitive abilities, from next month until pretty much the end of the year I’m going to be taking a deep dive into a Frankenstein’s monster of an open world game. One so strange and disjointed it shouldn’t even work. A videogame that is hateful and joyous in equal measure: The Legend of Zelda: Breath of the Wild.