Monster Hunter: World is a reconfiguration of the series’ traditional design, updating and replacing its characteristically obtuse elements with those identified with the state of the art. This shift is a habituation to the popular sensibilities of Western players, an audience repelled by a lack of transparency in the old design, without alienating the series’ Japanese fanbase. The game’s success in these terms is obvious: World is both the best-selling entry in the series and Capcom’s 35-year history. However, this successful appeal to the West prompts questions around World’s relationship to the series’ identity, and how its evolution reflects contemporary player desires and expectations. Here, I attempt to describe the deviations in Monster Hunter: World’s trajectory that emerge from its title, interrogating the game quite literally on its own terms:

The first point has been partially made elsewhere: Andreas Inderwildi notes that World’s monsters are comfortably placed in the game’s pre-existing, living ecosystem; we as hunters are deviant in our attempts to “encroach on their territories,” or what the game calls the “New World.” Our “arrowlike nomadism” (p12) is scientific colonization, an attempt to grasp some essential quality of both the unknown physical environment and its inhabitants; we impose a Civilization on the existing community. Our apparently superior understanding of the New World has its root in science, which legitimizes our colonization of the land (territorial expansion) and its occupants (research subjects). The linking of regional and biological conquest is continued in our own actions: our mastery over each new area supplies material to biologists, who expand the capacity of the research base; blacksmiths, who create gadgets to use in the field; the chefs, whose meals (and, correspondingly, combat benefits) are permanently improved by a single delivery of ingredients; and most importantly, the base’s administrative leaders, who can build new campsites within each zone. Potential campsite areas are always already empty in an effort to elide the actual brutality of conquest. 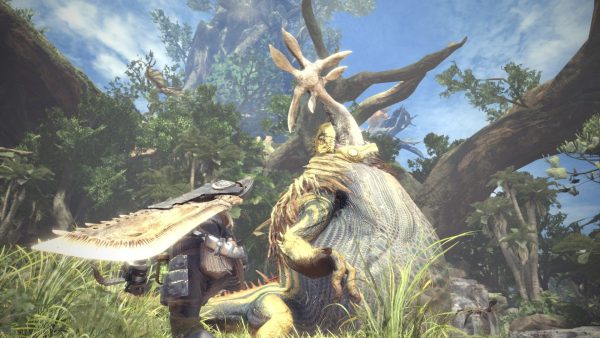 The earliest games in the series were not framed in the same way: instead, your role was largely to serve an isolated village – to gather materials (e.g., minerals, fish) from the environment, and make the surrounding areas safe for the community. An early quest description in Monster Hunter: Freedom, for example, reads: “HELP! The children are being attacked by small, blue monsters called Velociprey! 3 of the beasts are outside! Do something!” In Freedom, the urgent quests that obstruct progression to higher-ranked quests are often phrased as necessary steps to protect the village, and only a few requests come from scholars or scientists eager to study the monsters in captivity. In World, almost the opposite is true: you act as an agent of scientific inquiry, with main quests that extol the glory of the hunt, and most simply require you to kill – an act that apparently yields a great deal of usable data. The in-game bestiary that fills up with monster characteristics, weaknesses, and loot tables after each encounter is worlds apart from the vague (and functionally useless) “reference material” on sale in Freedom. The latter treats monsters as mysterious predators, forces of nature, cultivating a respect of their strength that discourages unnecessary engagement. World does not have “monsters” as such because it considers them as essentially knowable – and readily killable – from the start. This is best illustrated by the two games’ divergent approaches to the presentation of new monsters via introductory cutscene. In Freedom, monsters are made threatening through a show of dominance, often featuring their unique characteristics to demonstrate power over targets of previous hunts. This remains true to some degree in World; however, cutscenes more often serve to exhibit the player character’s performance of heroic or physically challenging feats in response to an initial attack. The monster does not exist in World because each enemy is analysed, demythologized, and hence made toothless before a fight even begins. Hunts are exciting rather than dangerous.

Perhaps the empathy felt for monsters, whose death throes apparently lend them humanity, is so misplaced due to a murmured unease at the performance of colonization as entertainment without consequence. World is reminiscent of the “canned hunt,” whereby animals from Other lands (often raised in captivity) are enclosed to prevent escape from white people who pay for the ostensible experience of hunting without danger or potential failure. In World, monsters are kept within bounds by the specific decision to kill them during quest selection. Expeditions, which have no time limit or official goals, do allow monsters to escape after some amount of time, but they are disincentivized by their lack of reward – and even then, the length of the hunting period remains a product of the game’s code. Hunts are hence always conducted under controlled circumstances. Canned hunts (and playing World) are acts of self-definition against nature; the performance of creating or developing a unified, separate, integrated self-concept that first emerged in Aristotelian thought, and is notably reiterated in Piaget’s characterisation of (children’s) play as “the assimilation of reality to the ego.” Piaget’s generalization of human development marks the boundary of human and environment, reified by acting on it during play, as essential to psychological health. This perspective, which remains prominent in positive psychology, motivates the controlled practice of human domination over nature in World.

In this light, World’s efforts – like Monster Hunter 4 before it – to sand back some of the series’ idiosyncratic (and often frustrating) elements make the safari preceding the encounter less arduous. In other words: having provided both fish and barrel, all that remains is to simplify loading and firing the gun. Most items can be reliably gathered while sprinting. Equipment can be changed during a hunt to suit the situation, and indeed, instant travel to any campsite via pterosaur taxi makes the process a snap. Tracking has been semi-automated: bright green “scoutflies” form a breadcrumb trail to the monster of interest. These changes de-emphasise preparation and planning, as all contextual factors – location, target(s), current inventory – can now be dealt with on the fly. When monsters disengage, there’s no need to guess at the final destination of their meandering flight pattern. The glowing trail that smears the centre of the screen does all the work of navigation. To be clear, tracking in previous Monster Hunter games was an unpopular and arbitrary practice. Under the old system, you could “paint” a monster with a thrown item that made its position temporarily visible on the minimap. It took only minor effort to pause, check the map, and guess the monster’s destination from its trajectory. But turning all of that responsibility over to semi-autonomous scoutflies makes tracking feel totally mindless. Once a monster is found, World acts as both GPS and tour guide, setting the optimal path and pointing out resources on the way. Learning the space is no longer a requirement of its effective traversal. Despite their positioning in the narrative, scoutflies seem more arbitrary and videogamey than the system they replaced. (At least Fable 2 had a dog.) Outside the combat event – itself a largely reactive process – the active element of the hunt has degenerated, designed away into automatic function. 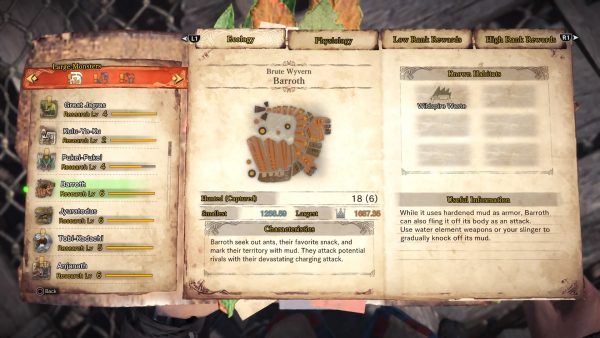 The New World is positioned both as part of a wider ecosystem (despite its apparent isolation) – as a place where elder dragons go to die – and a functional ecosystem in itself. However, these concepts are only ever expressed in dialogue, and otherwise imperceptible in the environment. Narrative is simply retrofit to the series’ traditional approach to level design. World is, consequently, incorporated as a set of distinct areas – forest, desert, coral zone, wasteland, volcano – that lack physical connection (i.e., all quests take place in a single area) and give the lie to their coherent co-location. If anything, their similarity lies largely in how they encourage different types of movement: not just running and jumping, but also climbing, sliding, wallrunning, gliding, swinging, and so on. They are playgrounds (entertaining ones, to be sure); calling their collection a “world” is more reminiscent of theme park naming convention than the complete ecology insisted on by the narrative.

Even taking for granted that the New World is indeed a totality, our presence there only serves to make it incoherent. This occurs on the most basic level: although the Rotten Vale is supposed to be the place where monsters go to die, we kill them wherever we please, and how this affects the ecosystem is conveniently ignored. Regardless of whether a monster is preventing scientific progress in an area, or the expedition wants to detain the Very Big monster for study, or (later) divert its dying movement to the ocean to avoid an explosion, we always act to disturb or disrupt another. We break (parts from) the monsters’ bodies through the comfort of an avatar whose bodily integrity can never be threatened. We carve up the bodies we make “wrong” (or, perhaps – ironically – “monstrous”) to make armor that more effectively guards (or encloses) our own. The colonizing expedition’s body of knowledge is made fuller and more complete by grasping at the ecosystem we repeatedly fracture.

In this sense, World reflects the trajectory of Western anthropology and ethnography, practices commodifying Other communities via written account (theft of self-definition, or the right to refuse it) and “collection” of their objects. Museums’ continued claims to own the latter are founded in scientific authority, predicated on their “complete” body of knowledge. For example: “Removing parts of the Cook-Sandwich collection, which is of great historical, scientific and educational importance nationally and internationally, would cause considerable harm by depriving the collection of its integrity.” The apparent wholeness of a museum exhibit – a fundamentally incomplete series of objects – is prioritized over the rights of a living member of the community. World largely keeps its “First Wyvernians” out of sight, and our expedition’s long-term effects are elided entirely. The game’s prioritization of immediate action, neglecting consideration, underpins its deviations from Monster Hunter’s identity as a series. Ultimately, however, as the creation of a studio named for the hard, impenetrable shell of the plastic capsule, World is an exceptional realization of corporate identity. The updated game design does not favor thoughtless behavior; rather, thought is contained to the present: isolated, protected, unified, and coherent. But not whole, and neither willing nor able to compromise its definition, however limited, to habituate the possibility of the future or the past. 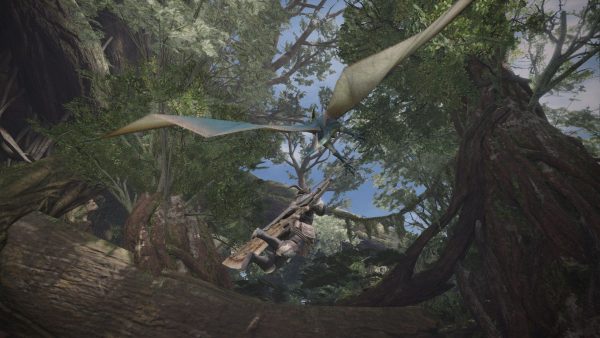