Let’s Play a Love Game: Love is (Not) a Choice

Multiple playthroughs are a staple across visual novels and romance games. Their necessity stems from disparate plot events that are hard to reconcile, especially where multiple love interests are involved. start;again, on the other hand, utilizes branching story paths to tell just one love story. Such a distinct game design choice carries with it the potential to analyze said relationship from multiple angles, hopefully developing it further in the process. Unfortunately, any such sense of variable possibility in start;again is hindered by a lack of choice befalling the characters as a result of plot-critical amnesia.

Developed by Two and a Half Studios, the game was released earlier this year. It incorporates both mystery and romance elements into a death game setting, wherein the characters only have two hours to escape certain doom. Over the course of the story they fail repeatedly and, upon having their memories wiped, must start over in new settings, including a train car, factory, and church. As with the likes of Nine Persons, Nine Hours, Nine Doors, players utilize a flow chart function to track their progress across various timelines which they must alternate between and progress in before being able to achieve the true ending. The protagonist is a young man named Sebastian (or Sev) who attempts to escape alongside fellow victims Rinne, Nini, and Mikhail (or Mika). In Sev and Mika’s case, vague but lingering memories hint that the two may once have been lovers. 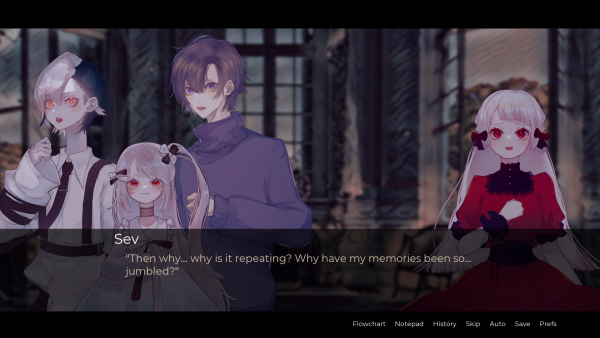 It’s the amnesia element, and the pain its fallout inflicts, that most stands out about the couple and their relationship. Most romance-heavy games primarily depict characters falling in love with each other for the first time, whether through dates or other shared experiences. These relationships grow over time in such a way that romance and sex become gamified as achievements for the player as they progress. Meta-textually the characters have pre-determined romantic roles, but textually they enter said relationships and roles of their own volition. Take for instance Dramatical Murder’s Koujaku and Aoba: they’re an example of the friends-to-lovers trope common to the genre, but in narrative context they choose to move beyond mere friendship because of the bond they forge throughout the game.

start;again bucks expectation by letting its characters in on the predetermined nature of their relationship. Via selective and conflicting bouts of amnesia Sev and Mika are forced to confront their assigned roles as lovers without possessing full memory of the context and history that led them to that point. The depth and specificity of their memories shifts across routes, but the pair never enter the death game with clear shared memories of their supposed pasts together. This calls forth all manner of questions: how would you react if a stranger told you they were your partner? Conversely, what would you do if your partner completely forgot you? Should one move forward with a relationship that has had its foundation so dismantled, and if so how?

Amnesia as a plot device serves to obfuscate specific details of characters’ pasts so that they may resurface later, generally for maximum dramatic impact. It also robs those characters afflicted of crucial information so as to create a sense of discord between what they know of reality and the larger truth beyond their reach. With that said it doesn’t inherently mean the removal of all agency. Trapped though the game’s cast may be, they still possess the ability to evaluate their circumstances and act accordingly. There is also the theoretical possibility of characters changing their outlooks on one another depending on gained or withheld information. 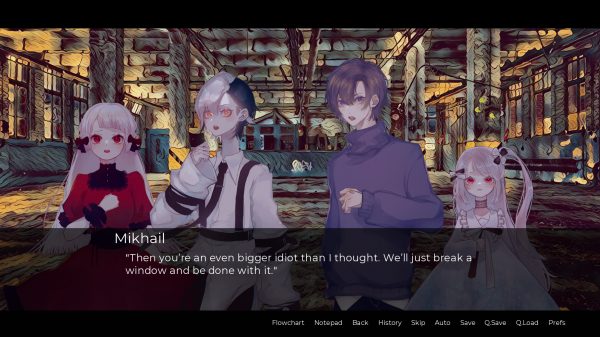 In practice, however, Sev and Mika possess more agency as victims than they do as lovers. As victims they still possess the free will to make escape attempts as well as to make choices throughout the course of the narrative that heavily impact the success of said attempts. As lovers, the possibilities feel more limited. The pair enter the story with crucial romantic history, regardless of if they have full memory of it or time to rekindle such feelings. For any sense of agency to be achieved within a relationship so predetermined, the possibility would have to exist for the characters to redefine their relationship within their new context if not reject the notion of courtship entirely.

The closest the game comes to this is in the second route. Sev and co. wake up on a train and are re-introduced to the rules of the death game, which follows the same basic structure as in the first route though the setting has changed. The most crucial adjustment from a character perspective is that in this playthrough Mika remembers Sev (as well as their romance), while Sev still has no idea who Mika is.

By making the amnesia one-sided, distinct tensions are created which impact each character differently. In Mika’s case there’s the obvious distress of one’s partner no longer psychologically being the person one remembers. For Sev though there’s an entirely different sort of stress: thrust into a death game with almost no time to escape, he must also contend with the seeming stranger who is hurt not so much by Sev’s actions as by implications of a life Sev doesn’t even remember living.

Where start;again drops the ball is in its follow-up to these ideas. Assuming the couple must end up together, an amnesiac love story like this would seem to have two potential paths: forging a new love over the course of the game, or regaining all past memories and resuming the relationship from where it left off. Unfortunately the game hedges opts for a blend of the two but doesn’t commit to character development of either type. 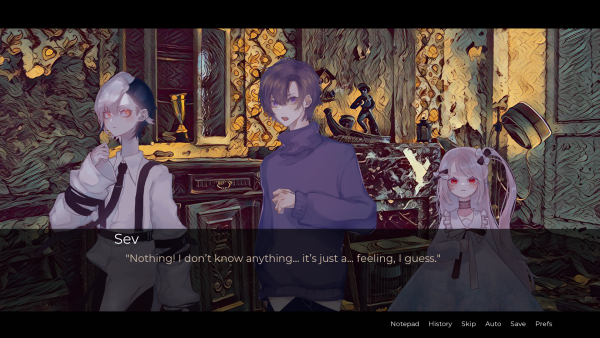 Part of the issue is with specificity, or a lack thereof. start;again is a short game and one that spends most of its runtime on escape attempts or larger party dynamics. Few scenes focus solely on Sev and Mika, which is fair to an extent given the extenuating circumstances imposed by the plot. In a game where memory is key, however, one might expect emphasis on specific events and interests; key moments shared between the boys beyond just despair as they fight for their lives. The game delivers little of the sort. Mika and Sev largely just trod forward through the plot, sometimes more enamored with each other than at other points. There is a brief scene where they cuddle up alone on a bed, but it’s chaste and sweet to the point of feeling devoid of grit or character. Without adequate breathing room and build-up, the pair’s warming up to each other feels more dictated by a need to set the tone for the ending than by organic character growth. The ambiguous, foggy nature of amnesia builds in a means for hand-waving the characters sticking together simply because it “feels right.”

It’s this unwavering embrace of predestination that most robs the romance of any sense of meaning. Though there are multiple routes throughout the game, none depict the rejection of romance as a viable possibility. Sev and Mika invariably grow closer as the story progresses (even if they don’t specifically consider themselves a couple), and it’s ultimately revealed that, narratively speaking, this cycle of death and amnesiac rebirth was instituted to find a timeline in which both boys survive the death game to continue their romance afterwards.

This final twist is a reinforcement of the roles constricting Sev and Mika on a metatextual level. As fictional constructs and as continuously resurrected characters, they exist solely to love each other. Through death after death, both before and during the game’s events, they are subjected to grief and pain supposedly in the name of a great love which they aren’t even allowed to maintain clear memory of. They are in effect walking plot devices used to achieve a romantic end. The developers intend for the pair to come together, and in crafting that story box the couple within a narrative that provides no other possibility but death. 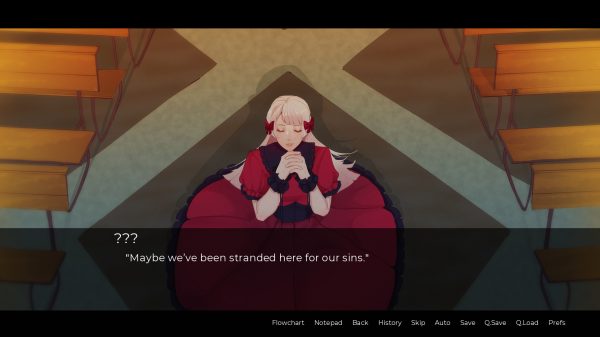 At first inspection, start;again’s reliance on amnesia seems to strip Sev and Mika of agency. It robs them of full knowledge not just of their past life together, but of any past in which their fates weren’t explicitly linked. With that said, the closer one looks the more apparent it becomes that the amnesia doesn’t remove agency. Rather, it is the characters’ lack of agency as fictional beings made literal as narrative construct. Because Sev and Mika’s love is fated to blossom, it is never allowed the opportunity of uncertainty. Without uncertainty there in turn is no vulnerability, and without vulnerability there is no intimacy. Sev and Mika are soul mates without individual souls, lovers too constricted to truly love.