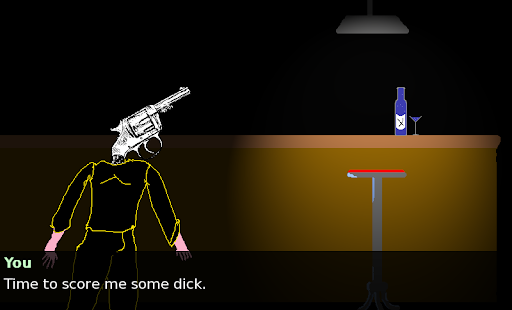 Eric Cline ponders the violence of the body.

Many dating sims deliver sentimental slice-of-life stories, while others are genre pieces in which romance is allowed to develop alongside world building and fantastical events. Some dating sims, however, belong to a third category entirely: those whose premises are attention-grabbing and even batshit ridiculous, often because their characters are literal objects.

Such is the case with Empty Fortress’s 2015 offering Gat Life: Boyfriend Bar. As indie as indie games get, it’s easy to play to completion within ten minutes. It’s the sort of time commitment that makes one willing to try anything, especially when coupled with such a bizarre concept: you play as a gay man with a gun for a head (or both heads, rather) pursuing sex with other men who are similarly loaded.

How did such a game come about? Developer Empty Fortress has stated that Gat Life was inspired by the following tweet from Coming Out on Top creator Obscura: 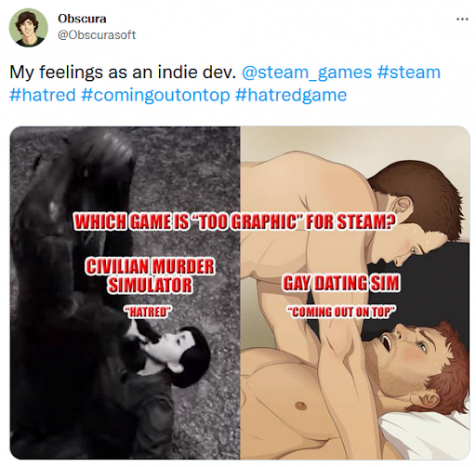 It’s a relatable sentiment, though not a novel one. At this point, virtually anyone who isn’t a fundamentalist agrees: societal standards of acceptability that dictate that sexual content be more thoroughly censored than violence are more than a little troubling. Still, it’s one thing to make art that addresses this issue and another to make art that does so well. Gat Life approaches the topic with all the subtlety of a sledgehammer, or rather, a shotgun. Thus, it begs the question: how does one craft effective and enjoyable commentary via the videogame equivalent of a shitpost?

In this case, the trick lies in telling a story that reads as earnestly, authentically gay, even when the dialogue comes out the barrel of a loaded gun. Simply put, these gay guns talk like real gay men. All our intertwining lusts, wits, and exasperations are present from the very beginning, in which our gat-headed player-insert character ponders what to do with what precious free time he has away from work. While there are friends he could call up or hobbies he could indulge in, there’s also the matter of his most base, carnal desires. As such, he decides to make his way to the titular Boyfriend Bar, which only further highlights his desperation.

It’s clear by this point that the game is incredibly simple art-wise, and it works. Though the representation of the bar lacks depth and décor, it still includes the defining objects of a night half-regrettably spent at a club: alcohol; a shitty, uncomfortable stool; and dreadful lighting that barely extends beyond one’s own face. If anything, the scene’s lack of other details highlights how little they would matter: a shitty bar is a shitty bar, and its intended purpose goes far beyond resting your ass on a stool all night. 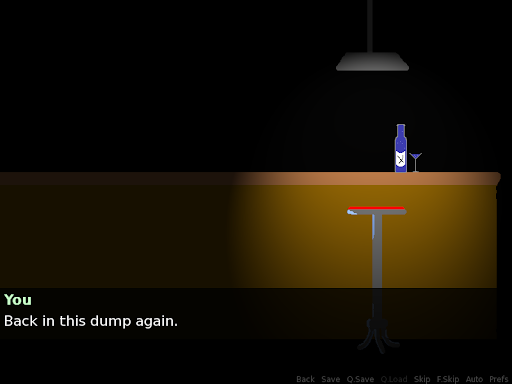 It’s at this point that the player-insert begins to scope out his fellow patrons. Three catch his eye: a beautiful newcomer who could likely have his pick of men at any time, a burlier dude with a nice ass, and an older gentleman who has an extra special magnetism that defies description. Upon delivering short narration about each, the game prompts the player to choose which gunman they want to pursue.

All three are clearly recognizable types, and they promise a solid variety of options to suit different player’s tastes in men. Though they’re walking guns, the process of approaching and talking to these potential partners reads true to life. In the older man’s case, any attempt at romance is thwarted before conversation begins because the player character disgustedly notices the man fully stroking his genitals at the bar. The newcomer is off-putting in a different way. His seemingly perfect physique only makes the already anxious narrator that much more uncomfortable with his own, specifically his gut and bald spot. Even when composed of deadly weapons, there’s no more authentic hallmark of gay male life than unhappiness with one’s physical appearance.

Between disgust at the older man and disgust with his own body, the player-insert ultimately finds himself left with just one remaining viable partner. While a wide variety of routes available is an appealing aspect of many dating sims, Gat Life is just concerned with one night’s attempt at sexual fulfillment. The lightning fast replacement–of hope for an array of options supplanted by the knowledge that there’s virtually no actual choice to make–feels as familiar as the opening narration about burnout, as any gay man who’s ever downloaded Grindr just to almost immediately delete it can tell you.

There are multiple vantage points one could take when analyzing the game’s interweaving of gay sexuality with firearms. Guns are by design tools of violence, built to cause death and injury at the discretion of their wielders. This damage can sometimes even be self-inflicted, whether in the case of suicide or, more broadly speaking, inner-community violence. That’s not to mention gay men’s often fraught relationships with masculinity as a metric by which they are both judged and evaluate each other. What could be more manly and less sissy than a glock?

It’s also worth noting that the new-boy-in-town character who’s considered the most desirable has what can only be described as an instrument of war crimes for a head. The actually pursuable character, meanwhile, is a handgun much more similar to the player-insert. Their lack of disparity in appearance triggers fewer anxieties about body image or sexual desirability. 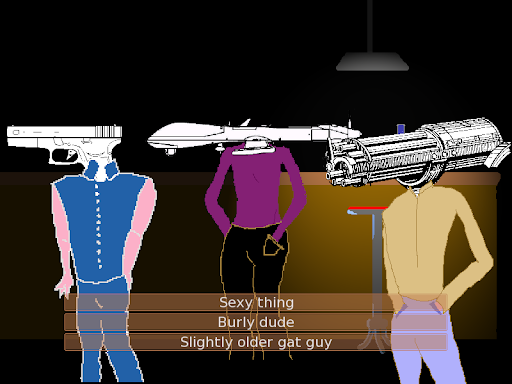 The most interesting aspect of Gat Life’s gun-bodies concept isn’t what it says about the guns but rather the men whom they literally deface. Deadly as guns are, their existence is often defended as a necessity for self-protection, self-determination, or some other byproduct of humans’ constant need to renegotiate terms by which violence can be deemed acceptable. In this reframing guns become tools, ones whose potential for carnage is transferred in the cultural consciousness to the wielders, divorcing design and purpose.

Sentiments regarding the gay male body, meanwhile, are neither as forgiving nor external. To large swaths of people, gay men’s presence is inherently threatening. It is seen as indicative of moral decay, societal rot, and sexual abuse and molestation. This danger is considered viral, a hazard spread a la some sort of contagion. Such is made obvious by societal preoccupations with the cause of gayness itself; is it the doting mother, the embrace of effeminate interests and attitudes? That neither is true is hardly the point; to be made a scapegoat is to take on the resultant exile, regardless of actual guilt.

At the end of the day, the gay male body is viewed as a death machine: a harbinger of immorality and sexual violence to be controlled at best and eradicated at worst. Nowhere is this more upsetting than in the decades-long association between our bodies and HIV/AIDS. Zealots deem the disease a form of divine punishment, the natural result of indulging our sexual desires in any circumstances and with anyone. There is no reasoning with these attitudes, nor room for argument: the gay male body, in the act of love or sexual release, becomes the tool by which said acts are punished.

What, then, of our player character’s sexual encounter with bachelor number three? He accompanies the sexy-bottomed man to his home, where the two waste no time getting hot and heavy. Their kisses explicitly taste of cordite and their genitals are revealed to be yet more weapons, resulting in descriptions of climax that are shamelessly sexually bold yet also devoid of anything resembling genuine eroticism.

The protagonist of Gat Life is perpetually tired, processing his station in life with a sardonic wit that doesn’t quite take the edge off but provides a little laugh between what short blips of happiness he can find. Though Empty Fortress only ever put the game up on comparatively lax sites like Itch.io, it’s hard to imagine it wouldn’t have an easier time getting approved for Steam publication than an identical game with all the hardware replaced by actually passionate gay men’s faces and cocks. (Just look at Jast Blue’s localizations of Nitro+Chiral games, which have separated, more censored versions on Steam compared to those on Jast’s own site.) Ultimately, Gat Life makes its point, and it does so with a tongue-in-cheek irreverence that matches that of working class faggots shittalking their bosses. Move over Ellie, Linhardt, and Tingle, there’s a new source of Gay Representation™ in town.

Gats off to you, brother.