Gaze is incorporated in games in various ways. It differs in the camera angle, the dynamics of the view, the gap between what is seen by a character and what is seen by a player. Whether the gaze scrolls along the continuous flat surface of the setting, is cast from above, or peeks from behind a shoulder, it drives the action of a game, and activates the environment. The view is orchestrated by the designer, performed by the character, and interpreted by the player.

The view is centered around the player. Before you learn anything about this world and how it works, the view is your primary tool. In some cases it stays like that, wrapping either the narrative or the mechanics around itself. 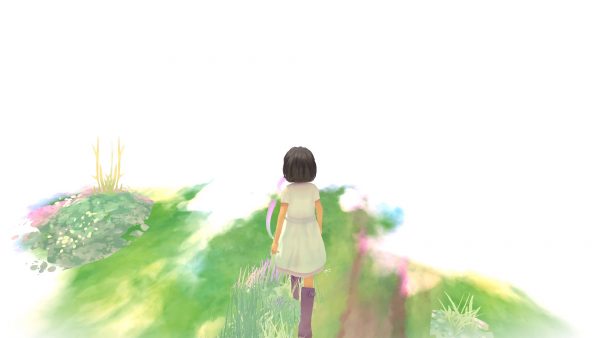 Beyond Eyes, Tiger & Squid, 2015
In Beyond Eyes, you play as the 10 year old girl Rae, who has lost her sight. The world is ﬂux, it keeps emerging and disappearing into white as you navigate through it.

I keep thinking about memory theater, the amphitheater where pieces of knowledge get assigned to particular places and images, where the central position is reserved for the viewer. In cases like Dear Esther, or Everybody’s Gone to the Rapture, the story is buried in the landscape, it unfolds piece by piece, triggered by your position in the environment and thus the angle from which you observe the world. In those games, as in memory theater, view is the only tool to stick to the narrative.

How can one de-centralize the position of the player in games’ visuality? I see things, animals, people, but do they see me?

My gaze is sliding off the surfaces of objects. Not a single living thing around me — single player.

Only surfaces with no fillings. (Presumably) with no feelings. Like Lacan’s Sardine can, they are subjected to my view and they can’t see me in return.

In order to optimize performance while keeping surroundings realistic, developers do a number of tricks. In case of open-world games, one of those tricks is to narrow down the world only to what I see at any given time. So every time I look away, the world does stop existing.

And unlike single point perspective, where everything gets sucked into the black hole of a vanishing point, the single point of the player’s view is actually responsible for the creation of its surroundings, rendering a world in its constant becoming and dissolving. It exists at the end of my viewfinder, but where does the world go when I look away?

If we look closer we can see the shift in the very fabric of player’s gaze — it’s delegated by design from a character to a player, from designer to character. The view is split between agencies involved in its production, and thus between realms they occupy. At the set of Detroit: Become Human the cameraman works in the empty room, moving with precision, while the action is rendered on the screen. As in motion capture, his movements are detached from his body and environment to be translated into the game world. It’s vision capture. This is where the self-enclosing hegemony of the player’s view is to be disrupted. 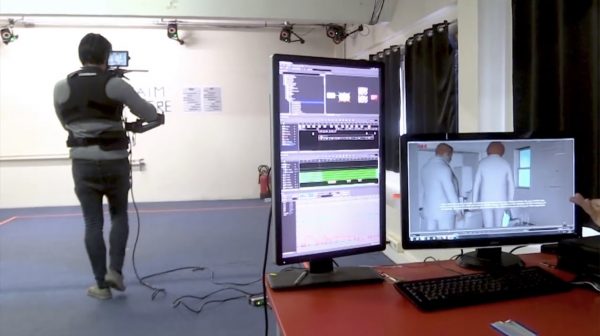 It shifts the habitual game mechanics, when in his 2-nd Person-Missing-in-Action Julian Oliver completely separates the view from a player, letting the player see themselves from the position of their enemy. By the time of the demo in 2005 the opponent was played by a bot, yet seeing through the eyes of the opponent gives a new type of agency to a non-player-character, as well as expands the existing gap between player view and the character, making this delegation fully transparent.

II. Watcher is being watched

When the world is tailored to fit the player’s view, it is insightful to find a way to see beyond normal camera restrictions. This would lead us to the other place, the endless shapeless skybox, which contains the game world, hosting its decorations, carefully placed to create the perception of a solid, seamless world.

This “stage” does exist within the final product of the game, but is inaccessible to the player’s eyes. In order to go there, the player has to abandon the narrative, simultaneously deconstructing the landscape of a game. Meaning cease being a player and become a bewildered spectator gone off-script. 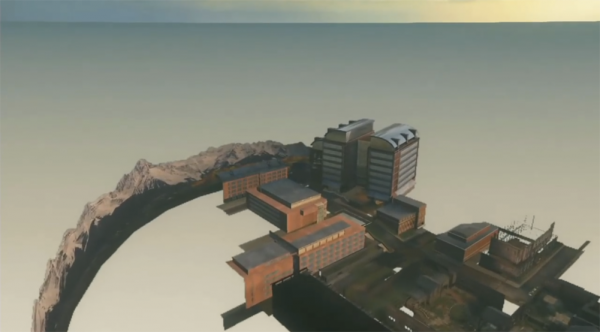 In his YouTube channel Shesez opens up various game worlds, showing things hidden from the camera. Let’s take a video dedicated to The Last of Us as an example: there are lots of things happens outside the player’s view. It presents a game as theater. Not that memory theater, that unified, glued together universe of things that produce knowledge and constellations, but the stage with its decorations, extras, and actors. In some instances we see NPCs loading cars with invisible suitcases, getting in T-pose, or waiting around the corner for their entrance to the scene.

The stage of this theater is filled with actions of various degrees of conventionality. Since the position of the curtain is defined by the gaze of the camera, and thus constantly moving, there is no fixed position of what appears off and on screen. It all exists simultaneously: characters, actors, artifacts unrelated to the scene, left there for convenience or any other unarticulated reason. 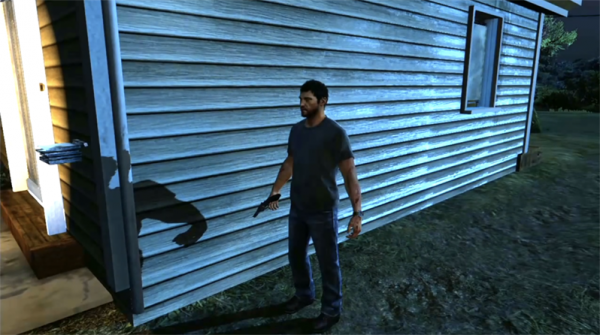 Screenshots from Oﬀ Camera Secrets | The Last of Us – Boundary Break, 2017

It also means that some actions can be reduced, since they happen out of view — a player isn’t supposed to see how Tess gets killed, so the second she is left behind, she is already dead. And some actions, although invisible to the player are still present, like in the scene where Joel gets attacked, and held under water, Ellie shoots the attacker both off-screen and out of view. This in turn raises a question of how elaborate and autonomous the world can be, how far action can continue if there is nobody to watch.

This shift in positions presents a possibility to deploy multiple views of various games assets: player can be watched by physical environment built around them, with cameras and movement tracking equipment, by players met in multiplayer sessions, their data can be collected, so that subjected to the view of this omnidirectional gaze of a game, they find themselves under the spotlight.

How one can de-centralize the position of the player in games visuality? Players sees things, animals, people, but do they see me? I see them through interfaces, through choices they make, which I can adapt to. Every time they go stealth and hide behind objects, I choose not to see them, as these are the rules of play.

The world doesn’t unfold around their single view, but rather is host to a multitude of them — multiplayer.

Surfaces with feelings, surfaces of decorations, all merged together into multi-point perspective, shared between players, characters, designer and a game itself.

Tags: videogames generally
← Off the Grid: Viviette
Due Diligence: A Boilermaker and His Helper →