My breathing is heavy and I feel a tad lightheaded from running for my life. Getting chased down by a knife-wielding spirit is not a pleasant experience, and is definitely not helped by the fact that said spirit hijacked my sister’s body. If only I could figure out the thoughts of whoever built this place, then maybe—just maybe—I could find my friends and escape. I think at this point I’d rather just be stabbed to death.

Viviette is a game that excels in making the player feeling helpless. Our main character is unable to defend himself and is pursued by a homicidal ghost for most of the game. The ghost shows up randomly and pursues you till you either give her the slip or end up on the business end of her knife. The unpredictable nature of the spirit keeps her terrifying and adds to the genuine feeling of dread one has whilst playing the game. She loves to show up once you’ve been in a room for a few minutes in an effort to trap you, or disappear suddenly only to try and cut you off a few rooms later. It’s almost to the point that not seeing her can be just as spooky, knowing she could be right around the corner.

The game opts out of music for the most part, instead preferring to fill the air with the groans and creaks of the mansion mixed with the heavy breathing of someone who may or may not be there. As a result I was always on edge to the point that a strong gust was enough to startle me. Not that the mansion itself isn’t unsettling as it decays around you and seems to be filled with macabre items. Rubble blocks the stairways, floors fall out from beneath you, and odd set pieces like a skull fireplace add extra creepiness to an already insetting environment. The dolls stick out the most, more than likely because I’m terrified of them in general. Even if you aren’t that scared of them, the fact that they litter this decrepit home smattered with blood and lack of eyes adds to the game’s sense of uneasiness. 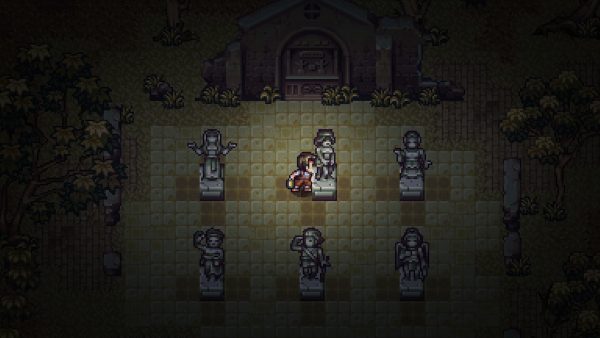 Compounding the dread is the fact that our hero really is not cut out for any of these events. As stated earlier he is never given a weapon, not that he’d use one anyway, given that his sister is the one trying to kill him. He’s also easily winded and his labored breathing adds to that sense of helplessness during pursuits by the killer. If you’re unlucky enough to be grabbed by her, the struggle to escape is intense, you’re forced to push keys to hopefully break free before a bar depletes. The bar empties alarmingly fast and the mad mashing of keys makes the struggles feel frantic.

As well done as the atmosphere is, it is hard to appreciate due to the puzzles that litter the mansion. Most of the game is spent trying to decipher puzzles via cryptic hints while being pursued by the ghost. The ghost is at least kind enough to wait for you to finish fiddling with the puzzles,however for puzzles that require running across multiple rooms to check the clues to the solution it’s rather tiresome to have to ditch her every time. A majority of the puzzles consist of finding a vague hint in a room then finding the corresponding puzzle and figuring out just what the developer was thinking of. The puzzles invoke feelings of Resident Evil and they weren’t that great there either. The frustration of all this pulled me out of the world and while it’s possible to settle back into the foreboding feelings the game is good at, I consistently felt pulled out a few minutes later trying to figure out how paintings and numbers correspond to each other.

Viviette is a spooky game that nails what makes horror work with its sense of dread and a killer who can appear at any time. However it hurts itself by breaking that sense of atmosphere with obtuse puzzles. For what it’s worth the game managed to scare me a few times…not like that is a hard task, honestly.