Due Diligence: A Boilermaker and His Helper

Leigh Harrison is full of song and stagger-juice.

Drinking is handled pretty poorly in most games. Usually, it’s just a health pickup that makes the screen blurry and your character clumsy. That’s a rote depiction and rather unrepresentative of the act or its effects. I’m sat in a chair sipping a beer right now and I’m great. MY vishion is fine an I havnt fallen over probably in like a deccades. So their.

My Elder Scrolls characters are always big drinkers, but I rarely get to express their love for skooma in a satisfying way. In my head, Jonathan Torchbearer-Wendelsson quivers around the countryside battered out of his mind and drenched in a multitude of his own liquids. “Can I borrow a fiver, good sir? You see, I’ve a train to catch. I need to visit my sick Aunt Gertie at the Royal Free and I’ve misplaced my damnable coin purse.” In reality, Oblivion skims two points off his intelligence and strength stats and leaves it at that.

Games generally miss the point of drinking and, by extension, alcoholism. They capture neither the highs of gentle to moderate inebriation, nor the crushing despair of dependence. Red Dead Redemption 2 features both. Its drinking feels tactile and involved, and its consequences palpable. I suppose this is to be expected on multiple levels, considering it was made by people who reportedly worked hundred-hour weeks. It’s easy to imagine them, stressed and overworked, slowly perfecting their collective dream of what a relaxed evening might feel like. Drunken camaraderie around a campfire is, after all, a world away from an open plan office in San Diego.

And thus we have Arthur Morgan and his merry band of outlaws. They root, toot, and rob, just as you’d expect, but also spend a lot of time drinking and getting to know one another. All this is facilitated by Red Dead Redemption 2‘s lavish set of mechanics which elevate the act of drinking above a mere consumable.

Drink: Arthur can find two types of drinks. Opened bottles will only replenish his Dead Eye meter so far, while full bottles refill it entirely and add a little buff. This is the correct presentation. As we all know, there’s nothing like making a questionable decision and then hearing the seal crack on a 7 oz bottle of whiskey—whether that be on the walk home, during midnight mass, or elsewhere. It’s a magical and restorative moment, and the game treats it as such.

Drank: Consuming alcohol in the game has great physicality to it, far removed from the “press a button on an item screen” operation of most games. Be it beer from the bar or gin stowed in his inventory satchel, Arthur picks it up and visibly uncorks it. Once the vessel is opened, drinking itself is controlled with the right trigger. For beverages bigger than shots, Arthur must take multiple gulps. Push the button and he’ll have a sip. But if you’re you’re feeling bold and hold the button, he’ll skull the whole thing in one go, opening his gullet and sinking the lot without as much as a shudder. When it comes to alcohol consumption, choice is everything.

Drunk: Hangovers—we all get them. They exist to remind us that while getting drunk is one of the greatest feelings we can ever possibly experience, doing so is quite bad for us. Characters in Red Dead Redemption 2 get hangovers all the time, and their symptoms are believable and accurate. Vomiting. Sleeping during the day. Inadvisably trying to drink one off. I did all of these things Thursday last week, and I am heartened to see my regrettable travails painstakingly replicated in videogame form. The game is, at times, an unflinching document of the of the ills of overindulgence. 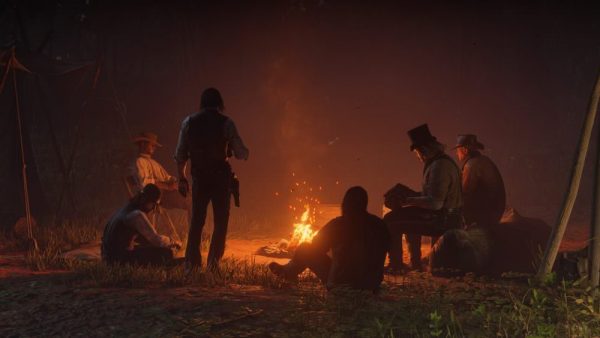 The mission “A Quiet Time” brings together all of the game’s mechanics and narrative flourishes into one spectacular take on the boozy night out. Arthur and his boy Lenny hit a saloon after a pretty heavy week of outlawin’. They have a few beers and then graduate to whiskey (natch). Jump cuts throw the lads through the evening as they proceed to get liquored up and bond as only real men can: drunk and in no way capable of remembering anything that transpired. Arthur goes for a pee out back. When he returns, Lenny is nowhere to be seen.

The game switches into a woozy first person perspective as Arthur searches the bar for his friend. After some some considerable effort, Lenny is eventually located, beer in hand, alone on a balcony upstairs, smiling upon the throng of people below (textbook mid-night move). More drinks are consumed, more stories shared. Terse words are exchanged with a patron who squares up for fisticuffs. CUT to moments later, when not a fight but a can-can has broken out. Alcohol can be the great ruiner, but also the great healer. For why should we argue, when getting drunk and dancing is so much kinder? Things like this happen in real life. I have seen it in town centers across the north of England most Friday nights since I was 12, but never before in a videogame.

Lenny disappears again and Arthur, in his drunken stupor, sets about screaming his name around the saloon. There he is. Shambling up to him, a prompt appears on-screen to call out his name: Ynnel. As Arthur grabs Lenny’s shoulder, he transforms into a bloke with mutton chops and a natty bowler. Classic case of mistaken identity. Easily done given the situation. Arthur repeats this a dozen times, the prompts now variously spelling “Greet” as TeerG, Gret and Grate, in an effective attempt at conveying the sensation of being drunk and useless, speaking words that aren’t all what you’d hoped they would be.

Arthur eventually finds the real Lenny having sex with his doppelganger in an upstairs bedroom. He’s not, obviously. He’s having sex with a prostitute because this is a Western. But Arthur’s pickled mind is playing tricks on him. The sequence ends with a slow motion escape from local deputies as Arthur vaults a fence shouting “you’ll never take me alive,” before disappearing into the night to enjoy the last moments of his drunken bliss. He wakes up in the morning on a hill and throws up all over a tree, then walks the mile and a half back to camp and his bed. We’ve all been there.

In her moving essay about drinking, Emily Reynolds nails the chaotic joy of liking alcohol a bit too much:

“I never feel better than two or three drinks in, walking down the street on my way to a party or a date or the pub, my night full of hope and opportunity and, crucially, more alcohol. When the alchemy is just right — you still feel in control, you know more drinks are coming, you know that nothing and nobody can stop you — it is truly magical. Drinking puts you right in the wild heart of life: You feel decadent and sensual and free, every nerve buzzing with uncontained, feral energy.”

I wish I’d written that. Because, at least for me, it totally nails the inescapable appeal of drinking. It’s not about confidence or shedding inhibitions. It might have been when I was younger, but not anymore. Drinking is just captivating in and of itself now. The rush of endorphins as alcohol enters my body is exquisite. It feels like breathing out. The excitement Emily mentions—pure, stomach churning excitement—is as all-consuming as it is pathetic. It’s why both of us drink a lot less these days. Alcohol forces you live your life to its fullest, for better or worse. Laughter and fun come so easily, but so too do tears, remorse and self-loathing.

One of my favorite feelings is scanning across a dimly lit bar (or campsite), soaking in those intense colors you only ever see when you’ve been drinking. My vision isn’t blurry, like in games, but swimmy; as if my eyes are moving a fraction of a second slower than my head. On the opposite end of the spectrum is waking up, disoriented and dehydrated, on a train or my sofa. In these moments, the color seems to have left the world completely. 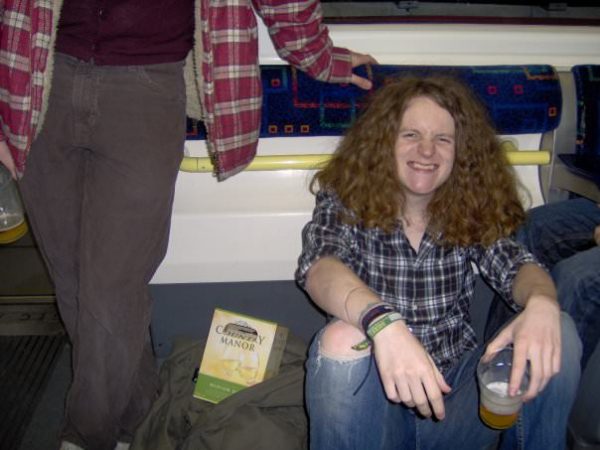 These intertwined but incompatible feelings are what Red Dead Redemption 2 captures better than any game before it. Drinking is a complex chemical and emotional process. Reducing it to a mechanical contrivance like a health pickup, even one with potential long term consequences, only touches on a tiny fraction of the experience. I’m not saying alcohol is good. It isn’t. I know that better than most. But it’s effective at what we need it to do. And it reminds us of that, in all sorts of ways, good and bad, whenever we invite it into our lives.

In showing some of these effects, the alcohol in Red Dead Redemption 2 feels more real, doubly so when compared to my lackluster Elder Scrolls skooma benders. We hold it in our hands and press it to our lips. We sip it gently by the fire, or knock it back in the dead of night when we think no one is around. It exists and is consumed in the world, not just an inventory screen, and accompanies the best and the worst of times. In celebration. In mourning. In joy. In heartache. It is always there.