Off The Grid: Yumi’s Odd Odyssey

Allison Winters was reeled into this bizarre adventure.

In my younger and more vulnerable years, I played a great many puzzle games on sites like Armorgames and Kongregate. Most of them were based around a plain level select screen and simple objectives like removing all the blocks in so many moves or pushing objects together to make a platform in order to touch some shiny object. The stories ranged from pointless nonsense to pretentious drivel written by deep people. I’ve had time to contemplate these memories as I played through Yumi’s rather strange journey.

Yumi’s Odd Odyssey is the latest in a series of platform puzzle games that extends back to the Super Nintendo era, the super Famicom, if we want to get technical about things. In Japan, it’s known as Umihara Kawase; which, in line with Japanese humor, is a pun on an old saying about fat tuna. The series progressed to the Playstation for a few good games and one disastrous PSP game. Creatively titled Umihara Kawase Portable, it was originally going to be released overseas as Yumi’s Odd Odyssey, but due to its poor reception on home shores, the idea was scrapped. Then, a Nintendo DS remake of the first two games was released with some enhancements and it sold like crazy, which prompted the developers to go ahead with a new installment for the 3DS. This one released overseas with the same title as the ill fated PSP game, bringing the story of Yumi’s Odd Odyssey to a close.

The reason it made me think of those flash puzzle games I enjoyed when I was younger is that they share the same minimalist feel. That is honestly the best word I can use to describe this game: minimalist. The level map consists of a series of numbered squares with lines between them indicating paths. The levels themselves are a mishmash of the Japanese schools, parks, and similar environments, only with a nautical flavor. The music has a very mellow elevator-like feel to it, and for once that really is not an insult. It’s all very calming and relaxing, and you’ll want to be relaxed since the game is going to wring your brain dry while trying to solve these puzzles. 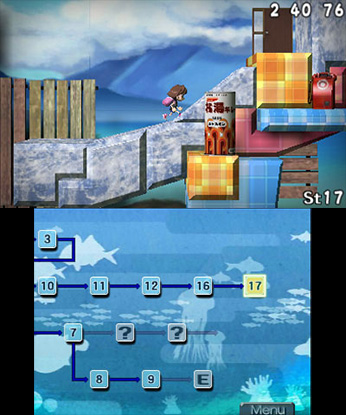 The core mechanic of Yumi’s Odd Odyssey is grappling. You use a fishing hook and lure to hook onto walls and other objects, and while that is simple enough, the rest is a little harder to wrap your head around. Instead of just swinging back and forth by pressing left and right, you lengthen and shorten the line to gain momentum. Besides swinging, Yumi can also rappel down ledges like she’s training to be in a Tom Clancy novel, stun enemies, and hook onto ledges to save herself from a watery grave. The game expects you to pick up on these mechanics rather quickly if you want to see anything besides the first ten stages. Just getting past stage four can be a hassle if you haven’t grasped the swinging mechanics yet.

Yumi’s Odd Odyssey is extremely difficult. Getting to the alternate paths that are required to see most of the content can be a very unforgiving process. The difficulty curve is a less of a curve and more a flat line followed shortly by a vertical line, with the amount of challenge increasing exponentially as you get further into the game. However, while it is a hard game it is never an unfair game. It simply expects you to learn its intricacies and use that knowledge to progress. This may be a turn off for more casual players, but stick with it and you’ll find yourself saying “just one more try.”

For those who do master the mechanics, the game offers survival challenges where you try to get through a series of stages with a set number of lives as quickly as possible. It also has an active speed running community for those who have a PhD in swingology. The game posts your time on the online rankings board and it’s a fun, if humbling experience to run through a stage as quickly as you can, only to see your time barely break the top 100. What? I said an active community, not a big one. 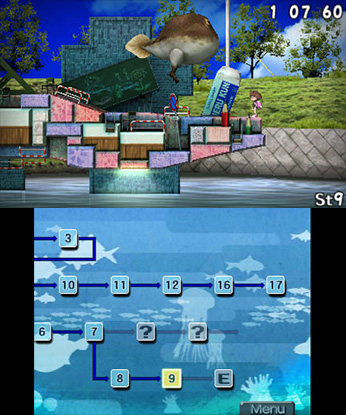 The relaxing and quiet atmosphere of the game reminds me of the Metroid series and its contemplative attitude, albeit without the undertones of loneliness that Metroid has. You have that time to reflect on life, love, and why you are grappling fish with human legs. Did I mention Yumi’s Odd Odyssey is weird? The stages are cobbled together in strange formations of checkered platforms, ice, and glassy spikes, populated by fish that walk on human legs and want you dead. The game expects you to roll with it, but its refusal to actually explain anything does bug me a little.

The fact that there are other playable characters is never really mentioned in the game and is something I discovered by accident. They all have unique abilities, for instance Emiko can use checkpoints and Noko, the time traveler, can bend time for precision aiming. Oh, did I forget to mention there’s time travelling? Sorry, so did the game. There should at least be an introductory cinematic sequence or something, but the game just assumes that you are familiar with what can loosely be described as canon. That’s fine if you’ve grown up with the series, but this is the series debut outside of Japan and you’d think they’d want to catch us up.

The nitpicking above is still just picking nits. Yumi’s Odd Odyssey is enjoyable and will draw you into its serene and bizarre world if you let it. Some have griped about the thirty dollar price tag, but honestly with around fifty stages and the high chance of replaying it, it’s not a bad deal. If you’re looking for a puzzle game to teach your brain who’s boss, then this one is quite the catch.