Off The Grid: Conception 2

In the summer of 2009 I picked up a copy of Persona 3 FES to see if the game was as good as people suggested. At the time, the combination of a dating sim and RPG was foreign to me, but once I was over that initial hurdle, I absolutely adored the game and its sequel. Since then, I’ve become a big fan of its developer/publisher, Atlus. When I heard that they were releasing a new Dating Sim/RPG hybrid called Conception 2, I was excited. Then, I played it and my excitement went right out the window, along with my dignity.

Conception 2: Children of the Seven Stars is an in-name-only sequel to a PSP game, Conception, released in 2012. It was developed by Spike Chunsoft, better known for games such as 999 and Danganronpa. It would seem the recent surge in the popularity of the Persona series likely helped this game reach our shores. Conception 2 is available for both the Playstation Vita and Nintendo 3DS, there appear to be no variations between the versions outside of the bonuses the demo gives you.

The story and characters are superficial and tend to sour the game as a whole. You play as a teenage boy with special powers attending an elite academy. There you can form relationships with the girl characters of the game and produce Star Children, who act as your party members during the dungeon crawling sections. The process of producing Star Children is called “classmating;” despite being created by an innocent ritual involving two characters holding hands and combining energies, it seems to be purposefully erotic by involving several suggestive cutscenes of the girls and sexual innuendos. Technically, there is no real sex involved, but considering that the characters, who essentially are parents to the Star Children, are still young high school students who’ve known each other for only a few weeks and taking into account the mistreatment of the girls, classmating looks uncomfortably skeevy. 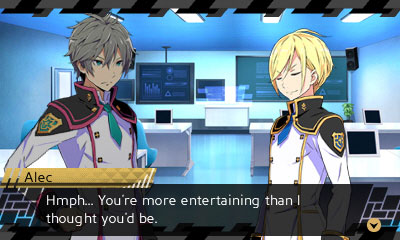 What made Persona‘s dating sim aspects work is that while the people you bonded with could be classified as stock characters, they had traits that compelled you to want to know more about them. Conception 2’s girls are just stock characters with bland story lines. You have the normal one, the shy one, the teacher, the Lolita upperclassmen, and so on. It’s just trying to hit every fetish on people’s anime checklist to keep them happy. The girls’ characters are unrealistic and overly sexualized, as are their battle costumes. It promotes the notion that the girl characters in the game are nothing more than eyecandy.

I could overlook some of this if the story was okay, but it’s just not. Its generic, save-the-world plot starts out being average and then becomes somewhat offensive. The game introduces a secondary form of classmating called “classmanting,” which allows you to create Star Children with another male character, though they are usually weaker. In comparison to classmating, classmanting cutscenes are short and only show the characters holding hands. I’d say the game is trying to slam male homosexual relationships, but that is giving it too much credit; it’s more likely they didn’t want to offend their audience.

This pandering extends to the main character whose dialogue options, despite having some freedom of expression, consist of so much machismo. However, he still comes off as insecure in a way that I don’t think the developers intended. A minor twist in the game seems to be that other people besides you and your party can go into the dungeons too. Most of the time the parties that go in do just fine, so while in the beginning there is some genuine concern for safety, it gradually shifts into something akin to jealousy on the main character’s part. He seems afraid that he’ll become average and no longer be the only one classmating or exploring dungeons with his harem. There’s no point to worrying, though, since the girls seem to have no choice but to bond with only you. That was the point where my cartridge almost went out the window. 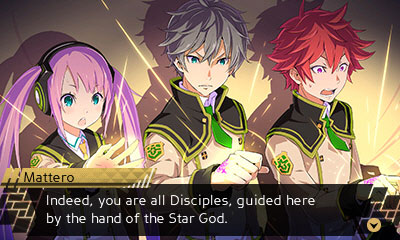 The story and characters are so unimpressive that it makes the RPG section of the game look brilliant by comparison. It has very little to make it stand out, offering your usual RPG fare of killing enemies, leveling up, and exploring dungeons. The sole interesting feature in the battle system is the emphasis on the tactical placement of your party members. Every enemy has their own separate encirclement and attacking from certain angles does more damage and certain arrangements can power up the main character’s attacks.

The other big feature of Conception 2 is the Star Children fusion. Each child’s stats are based on the strength of the bond you have with the mother, the mother’s stats, and the auxiliary items you’ve collected. After they are born, you assign them a class such as warrior, mage, rogue, etc. There are three Star Children to a team and by using different team compositions you can unlock new skills and gain stat bonuses. It adds an interesting facet to the game, but isn’t anything you haven’t seen in other games of its kind.

The dungeon design is not very good and just adds another layer of blandness. The dungeons are all randomly generated with one color scheme and wall type. Every dungeon is split between two styles of rooms connected by three styles of hallway. It’s not too bad for the first few floors, but after that it becomes a slog to get through. At least, the battle theme is pretty catchy, even if the soundtrack answers the question of “What if Shoji Meguro stopped trying?”

I realize that I may not be the target demographic for the dating sim aspects of this game. That still does not change the fact that this game was misogynistic and had mediocre RPG elements. The story has no weight, the characters might as well be talking love pillows, and I feel dirty for playing it. If for some reason you haven’t played any iteration of Persona 3 or 4, then go do that instead.