Due Diligence: The Mass Effect Andromeda Trilogy, Part II: All the World’s a Stage

In Mass Effect: Andromeda, the paragon/renegade dichotomy is out, baby. Gone is the simplistic model of old, where I could play either a journalist-punching genocidist or what amounted to space Jesus, healing the galaxy’s sick and washing their cloven feet. While those chunky blue and red button prompts were thrilling in the moment—who doesn’t want to lay someone out for doing their job?—they left little room for nuance across the series writ large.

Sure, I could mix it up and do some charity work alongside shooting my enemies in the back, but when combat unlocks are based on being either the very best or very worst of humanity, there’s hardly an incentive to walk the line in between. Andromeda throws this away and asks me another question entirely: How goofy do I want to be?

“Political double-crosses over massive bombs piss me off.”

I can’t play the antihero in Andromeda, not in the conventional Mass Effect sense of glowing scars scraped across a pallid face. Instead of basic morality checks, the game is all about tone. Throughout conversations I direct my character, Ryder, along two independent and much subtler spectra: emotional/logical and casual/professional. It lends my interactions added nuance, where I can vary my approach based on the situation or who I’m speaking to.

A hard-assed human war vet turned gangster, for example, isn’t going to react well if I petition her conscience or recite rules and regulations. Being a snarky hard-ass myself won’t do me any favors either, but she’ll respect the audacity enough to continue our parlay a little longer.

This change makes conversations flow more naturally, but also allows me agency over the character I’m playing that wasn’t present in the original trilogy. Beyond the paragon/renegade stuff, Shepard was a pretty fixed point on the personality scale: humorless. Almost everyone in those first three games was, and much of the dialogue felt like having a conversation with your boss’s boss. “Yes, I did have a good weekend, thank you for asking. Oh, you’d like to pivot the conversation to the team’s annual KPIs and how I can better contribute? Of course.” 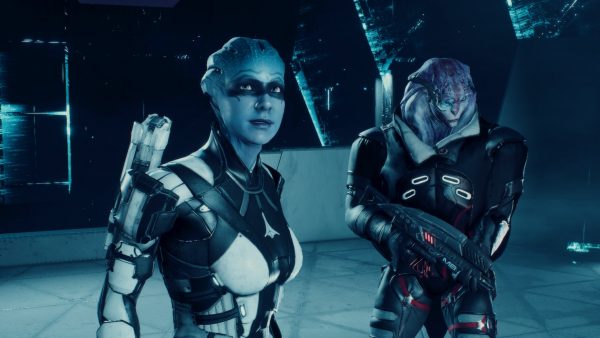 The logical and professional dialogue options retain much of this business-first tone. I request sitreps and properly address senior officers, just as I did back in the Milky Way. But I can also tell those same suits to go fuck themselves, should I think they’re letting personal prejudices endanger lives. Or I can choose to console someone over a mistake rather than remind them of their duties. Or throw out scenery-chewing gems like: “I’ve seen some crap, but this is serious evil!”

It won’t be for everyone, but I love being able to play a bit of a goofball when the situation calls for it. In the original trilogy, Shepard was only allowed to be funny when they were being an arse hole, whereas Ryder can deploy sarcasm and humor in much nicer ways. I don’t really have a “work persona” myself—I’m kinda just me, even with the most senior of colleagues—so I appreciate that my Very Important space explorer can be this wonderful, down to earth mix of conscientious leader and foul-mouthed upstart.

One might argue that losing the ability to be a right dickhead removes a lot of the series’ inherent roleplaying. I think there was certainly a time and a place for the Fable / inFamous / KotR brand of a linear morality scale that manifests itself in a protagonist’s appearance. It’s a neat trick and clearly communicates my actions have tangible consequences. There’s nothing quite like having red glowy eyes and horns growing out of my face to get me questioning whether I’ve lost my way.

But it’s also a bit of a blunt instrument, right? I do much prefer Andromeda’s approach of giving me greater freedom over a character who’s bound to moral code. So while I can never turn into an actual stone-cold killer, I can shape and embody my Ryder much more fully, albeit on her own terms. And playing her as an irreverent rogue with a heart of gold sure is fun.

Shepard’s interactions with actual bad guys were all very functional. As a consummate professional, they’d be either: 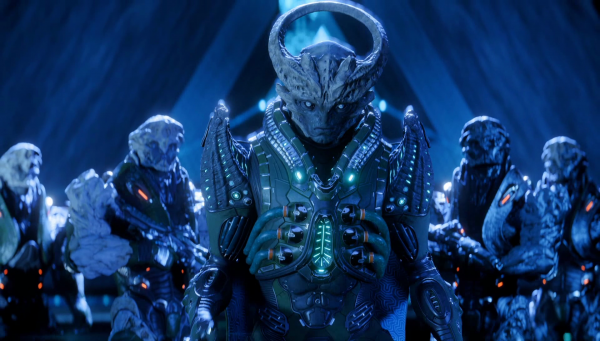 But where’s the sass, where’s the backchat? Ryder, in comparison, is neither Flash Gordon nor Ming the Merciless. She can be smart, and point out her obvious tactical advantage, or show her understanding of a foe’s difficult position trying to feed their family on a planet populated exclusively by space pirates. She can also call out the arrogance of the game’s Big Bad to his face, escape a cunning trap by faking her own death, and brilliantly/childishly reply to the war cry of “I am Invictor!” with “I am Pathfinder! Rah bah bah!”

It’s silly and juvenile and potentially even terrible writing, but I find it so infectiously…human. If the original trilogy had grand space opera ambitions (and was kinda glib for it), Andromeda is much more of a romp. Yes, there are obvious nods to Guardians of the Galaxy in the script’s irreverence, but there’s also a whole lot of Doctor Who—particularly the David Tennant era—running through the game’s fondness of fun and friendship.

“Never even noticed I was on fire, but they sure did.”

Like my Ryder, the crew of the Tempest always have a glint in their eye. It’s genuinely funny, the glee with which Nakmor Drack recounts that time he accidentally smashed through a container of Turian brandy while wielding a flamethrower. The image of him engulfed in flames; his excitement at being able to tell the tale; the massive belly laugh that comes along with it.

He’s first introduced diving off a gantry, shotgun in each hand, screaming blue murder as he tears apart an enemy base. After delivering a few lines about how much he sure does love killing stuff, he runs off into the heat of the desert in search of another battle. But not before kicking a giant space dog to death.

Drack is almost a parody of his Krogan bretheren; their dumb bloodlust turned up to 11 and played for laughs. Over the course of the game, though, he reveals himself to be so much more than this initial impression. He’s old, like centuries-old, and tired. Krogan fight—it’s who they are, what they’ve always done. And it’s who Drack is, too, but he recognizes that while he’s long past being able to change, his species must.

All of Drack’s major quests involve helping younger Krogan move towards this better future. He brokers peace between warring factions, narrowly averting a devastating civil war. He restores some modicum of trust between the Krogan and other species in the galaxy. He embarks upon a daring rescue mission deep in enemy territory. The goal: not soldiers or a clan warchief, but a vault of crop seeds. 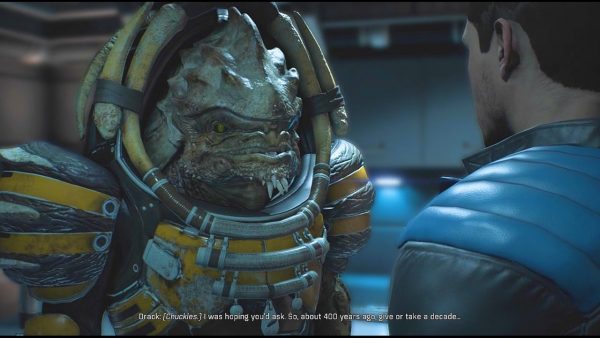 This pattern is pretty consistent across the rest of the cast. Characters that at first appear laughably thin gain considerable depth over the game’s many, many hours. Cora slowly finding her own voice after years as an apprentice. Peebee coming to terms with heartbreak and learning to trust again. Vetra navigating quasi-parenthood with her younger sister. Jaal teaching everyone lessons about forgiveness and honor while also being the series’ hands-down most entertaining fish out of water first contact alien.

Are they as affecting as Mordin Solus, the Salarian who made me cry? Not strictly. But as with the rest of Andromeda’s characterization, it’s going for something a bit different. The original trilogy packed most of its character development into a handful of main quests and one setpiece “loyalty mission” per crew member. Mordin’s arc progressed over two full games, but I probably only interacted with him a dozen or so times in total.

Andromeda s-l-o-w-s things right down, peppering its whole runtime with smaller interactions with the crew. A leg of a loyalty mission here, a conversation in the mess there, hitting the Nexus bar for an entertaining piss-up 15 hours later. The languid pace metes out character developments large and small at regular intervals, as the crew slowly open up and reveal more of themselves.

It’s less the three-arc structure of the original trilogy—adhered to by the games individually and the series as a whole—and a lot more like a long-running TV series. And I think that’s one of the reasons I’m enjoying Andromeda. It’s not the high-stakes, save the galaxy bombast of the earlier games. It’s longer, bigger and slower, and I’ve dipped in and out more than I normally would with a Mass Effect game. But in being these things—all of which could (and in some cases do) make for a worse experience—Andromeda is also more meaningful, more interesting, more engaging for it.

Even sixty hours in and with no end in sight, I’m eager to spend more time with Ryder and the crew, cracking-wise and (shit) talking truth to power. These adventures won’t all be particularly great, as we’ll discuss in more depth next time, but damn it will I keep playing to find out what happens next. To the bridge!