Due Diligence: The Mass Effect Andromeda Trilogy, Part I: Nostalgia

There are two types of people in life: those who thought the end of Mass Effect 3 was alright and those who really, really didn’t. Despite all the complaints about its brevity and lack of meaningful choices, it was fine. As the culmination of three games, hundreds of player-driven decisions, and many thousands of unique stories, the end of Mass Effect 3 was always fine.

Endings aren’t exhaustive catalogues of neatly cauterized plot strands. Nor are they always the happy endings we want for characters. They are the thematic and emotional conclusion of a journey, though not necessarily its terminus. Stories do not end with an ending, we just stop being the audience.

The internet was ablaze in 2012 with detailed takedowns listing all the problems with Mass Effect 3’s ending. It didn’t offer enough closure; downplayed decisions from previous games; was overly simplistic. And yeah, it kinda is all of those things. It takes hundreds of hours of players’ time and then asks them to pick one of three options. Do I: 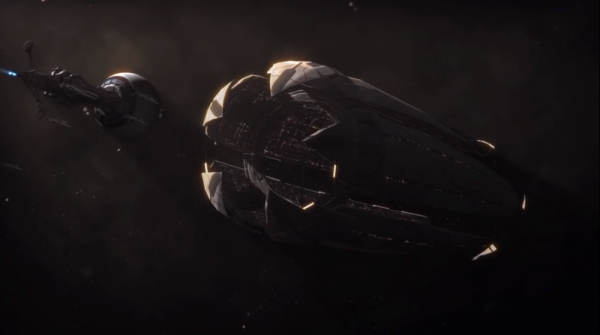 The whole thing even plays out like a gameshow, where I make my decision by walking through either a red, blue, or green door, on a set that looks like a Quake multiplayer map. It’s, erm, not the best—but it is fine.

And it being fine is fine because, well, the whole of Mass Effect 3 is an ending, lads. Every major character from the series receives a fitting and heartfelt end to their story arc. The entire game is poignant goodbye after bittersweet adieu after heartbreaking atsisveikina. I never thought of the ending as a crushing disappointment because it’s just the end of the game. The important stuff comes before that.

Hours before the credits rolled, I wept tears of melancholic joy as Mordin Solus sacrificed himself to cure the Genophage—the species-wide infertility weapon his race had unleashed on the Krogan 1400 year prior. He sang as flames engulfed the control room, at peace knowing he would die righting a wrong born of fear and mistrust. Through our time together solving the galaxy’s problems across two games, he had learned that understanding and compassion were more powerful than age-old grudges. We did this together.

There were countless opportunities throughout Mass Effect 2 and 3 for this story to play out differently. Mordin might never have grown to accept the Krogan. He might have remained a believer in the necessary evil of the Genophage. I might have sabotaged his attempts at a cure. He might have died. I might have killed him. So many choices led us to a singing Salarian doing what we both believed was the right thing. 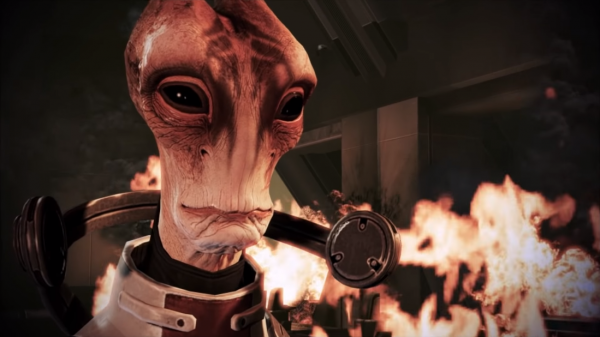 Not every character’s ending is as utterly devastating as Mordin’s, but each is a worthy sendoff to arcs built over the course of the series. By the time I got to the final choice I’d seen my actions ripple through and affect the lives of characters I cared deeply about—the stories I was most interested in were over. So as I stood under the hot studio lights, the host’s voice over the PA asking me how I’d deal with the Reapers, I just picked the one that seemed most appropriate for my Shepard, based on everything he’d seen and done throughout the series. And then I set my controller down, probably lit a cigarette, and watched my last ever decision as Shepard play out.

Whatever I’d chosen, the endings are pretty much the same. Sometimes the Earth is vaporized, but that’s got more to do with how many side missions I complete than it does whether I’m an arsehole for three games. And there’s a lot left unsaid. While the good guys obviously win, what happens next isn’t discussed. I don’t see what becomes of the Krogan or Salarians, or any of the huge supporting cast of minor characters. That’s not what I was coming for, but can understand others wanting a montage à la Fallout to round things out.

Oh, and some space stations explode that, according to a datapad I may or may not have found in Mass Effect 2, should destroy all life in the galaxy but obviously don’t, because whoever wrote that codex entry didn’t write the end of Mass Effect 3. (I’m not the type to get hung up on lore stuff because the logistical nightmare of game development makes mishaps like this almost inevitable. Props if you are; paying attention shouldn’t be ridiculed.)

There are lots of other things people didn’t like about the ending, but we’d be here all day unpacking them. Many of them are valid criticisms of story, delivery, or ties back to the series at large. The end of Mass Effect 3 is just fine, but I can imagine you being upset if you were wanting something more. Then came the petitions and death threats, and I lost any sympathy.

Not everyone was a three-game arsehole about it, of course, but the groundswell of negativity hit its mark and the ending to a video game was rewritten and patched. It was unprecedented. People worked overtime to “fix” it and add in all the stuff ca-cawed for, by way of extended cutscenes of minor characters being explicitly alive and playing cricket and stuff. The new endings don’t fundamentally change anything—it’s still red, blue, or green and the outcomes are the same—so the whole endeavor seems to have been a hollow victory. People were happy, I think; they at least stopped talking about it. 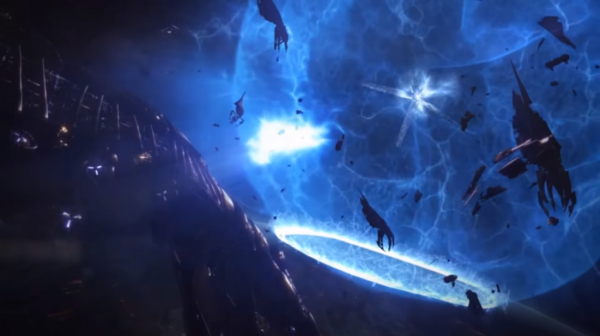 What this episode created, though, would blight the media landscape in the years to come. Sonic the Hedgehog. That really good Ninja Theory Devil May Cry. Everything that’s Star Wars, for Christ’s sake. Now, whenever fans don’t like something they simply complain and hope they get their way. This doesn’t often work, but in the case of Sonic it totally did.

Enough people voiced discontent into the ears of Jean-Ralphio that Jean-Ralphio sang back: “I’m fluuush with caaash! I’ll get the workers on it now!”. Everybody loses in this situation. Fans get exactly what they want, which is more of the same, and creators—actual workers exchanging their labor for remuneration needed to live—lose artistic freedom and have to pull untold overtime to meet such specific standards. In the year of our Lord 20XX, creators are only allowed to create with the express permission of the fans.

Mass Effect: Andromeda doesn’t seem troubled by endings or the whims of anyone. It starts with a few thousand pioneers shooting themselves 600 years across space to settle a new galaxy. The game literally tells players, in its opening moments, not to compare it to the previous trilogy. Andromeda is different. A new place, new characters, new stakes—and as it transpires, largely new mechanics. It’s a bold move in a field of 4s; Halos, Gears of Wars and Far Crys that are simple continuations of a formula, adrift from their trilogies but unable to move forward.

Andromeda is at pains to show me how different it is. I’m thrown into an open world and given multiple objectives at once. Combat finally feels like that of a shooter-cum-RPG, rather than an RPG-cum-shooter. I’m beset with, like, 40 skill trees, many of which interact passively, as buffs, and actively, via interconnected combat powers. There’s deep resource management and crafting, and a series of long-term metagame unlocks that affect everything from commerce and development to weapons and survivability. It’s a completely different game to the rest of the Mass Effect series. 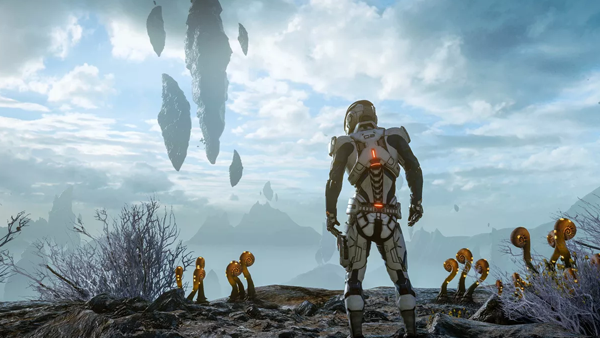 And yet every review I’ve read about Andromeda is inexorably drawn, like a helpless celestial body circling a black hole, back to the trilogy. It’s inevitable, I get it. Despite the furore over the ending, people love those games and I honestly don’t think any version of a Mass Effect 4 could ever have escaped the glow of the Shepard supernova. Their story is engrained in so many people’s consciousness. They have become the hero of legend depicted in every version of the Mass Effect 3 ending, new and old.

But I’m not convinced those games are beyond reproach. As a trilogy, they are probably untouchable. But as individual entries, absolutely fair game. The first is clunky, drawn-out, and has terrible shooting. 2/II/Two is great and pretty much perfect, if my decade-old memories are to be believed. And while Mass Effect 3 is such a fitting sendoff for the series, it is ironically so intent on closing up story arcs that it’s never felt as important. It exists to complete something, so its own stories naturally feel less impactful than the series-long ones.

All this is to say that I love these games but can see their deficiencies. My Shepard was a short, skinny ginger with grey eyes, massive forehead and chin, an underbite, and a Brylcreemed short back and sides. He’s dead or half-robot now, I honestly don’t remember. His story was one of the most enthralling and all-encompassing I’ve experienced in games. For five years from 2007 to 2012, I periodically inhabited him, shaping his every action and decision. Together we met great people and surmounted infinitesimal odds. It was wonderful while it lasted and then it came to an end.

Andromeda is not another tale of Commander Shepard. It is something different and I am excited to see where that leads. Liking something is wonderful. But not if it closes you off to new experiences. I didn’t travel 600 years for the same old story.