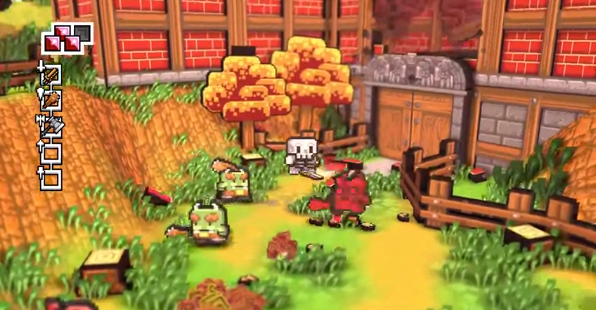 SkellBoy has a stalker-like crush on the Paper Mario series to the point that I’m a little frightened. Both use a simple art style, have no fourth wall, and play loosely with RPG tropes. While Paper Mario focused on lampooning its own mother franchise and the goofiness of a world made of paper, Skellboy instead draws from a much shallower well of jokes. A well whose bottom can be seen by a blind person in space.

Skellboy has one joke. You ready, here it is: Squares. Every character’s name is a pun based off of their cube-y designs and this extends to the dialogue that is written solely through cheap square-based puns. It’s a joke that wears thin fairly quickly. Yes, games like Paper Mario and UnderHero take advantage of their aesthetics to draw some laughs but the humour evolves into something more clever by the end. Skellboy has no such aspirations so we’re left with forgettable jokes, nothing of substance. The only hint of depth is the use of an off handed joke to foreshadow a late game twist, though like everything else it really doesn’t add much. It’s like a skeleton that you can see right through. It’s not hard to see how barebones the narrative, jokes and combat is, leaving you chewing on gristle when you need something a little meatier to enjoy.

The only real thing that the game has going for it is that, as a skeleton, you have the ability to swap your body parts. Allowing the player to mishmash the bodies of various enemies you defeat is amusing for a time, but it’s an underused mechanic. Early on, swapping body parts is a fun novelty and grants some useful combat abilities, but the game quickly becomes more about the weapons. After a while I really stopped swapping out my torso and head pieces, as I felt no need to do so except when the game forced the issue. It reeks of lost potential: instead of using the body swapping mechanic to solve puzzles, it’s more these vines will only break for an axe and nothing else. 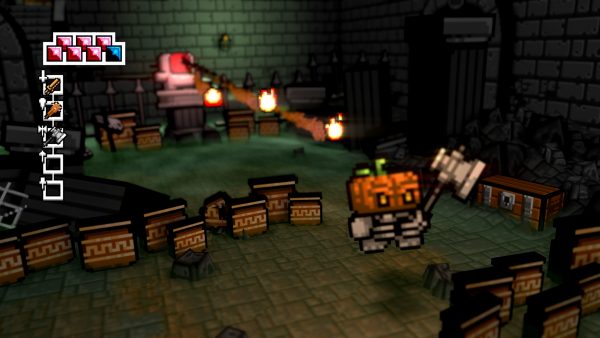 Despite everything I just said, the game is sort of cute. The pixel block aesthetic works for the game and while I wish more was done with it there is nothing wrong with it. The enemies are almost too cute to kill and the cowardly cube people are endearing to an extent. The rival character basically being a head by the end of the game is probably the best joke the game has that isn’t entirely square-based. I want to like Skellboy, but I just can’t. If it had something more to it might be a hidden gem, but as it stands it’s just fool’s gold.   Pro-tip for all you Cuboys and Girlbones: use that gaming cube to play UnderHero instead. Till next time, square ya later.