Off the Grid: Aviary Attorney

Allison Winters doesn’t want to be a courtroom sketch.

Actions speak louder than words;the person who feels the need to show off their intelligence is often not that bright. Games do this too— take a look at Valkyrie Skies, which loudly proclaims its own intellect.

Then we have Aviary Attorney. At first glance it just looks like a silly game about bird lawyers, but it’s so much more. It’s a game that dissects the idea of justice with finesse but doesn’t feel the need to show it off, instead letting its sharp script and excellent characters do the talking.

Aviary Attorney is a game that I saw as the Ace Attorney equivalent of Hatoful Boyfriend, and to be honest that’s what the game seems to want you to think. The early game plays like Phoenix Wright but with animals: the snappy wordplay, the wrongfully accused victim, the sham of a legal system…

And then Aviary Attorney decides to flip the entire concept of turning cases on their head and subverts its beautifully. After I completed the first chapter I had to stop playing because it messed with my mind so bad. Once I recovered from the shock, I couldn’t stop playing. 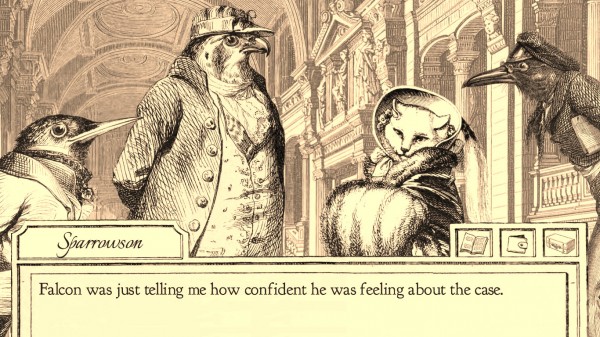 The game puts you in the shoes of disgraced attorney Jayjay Falcon as it dissects concepts of fairness and justice against the backdrop of a 19th century France on the verge of revolution. The characters throw around valid opinions and debate their points with grace. You, as Jayjay, are allowed to throw your weight into the ring too. You are limited by a set of dialogue choices, but multiple viewpoints are represented equally and intelligently.

For instance, when asked by a lioness zealot what justice means to you,you’re limited by three options, yet each one is a well thought out response. Even if they don’t fit your personal philosophy exactly, the choices have more flexibility and nuance than most dialogue systems. You’re able to shape it more to your ideas with further choices. This is helped by the fact that the script is secure in its intelligence, solid and clever without feeling the need to show off.

The theme and character design are beautiful, using a style that reminded me of courtroom sketches or old textbook diagrams. Despite the title, the world is populated by more than just birds: for instance, there are the foxes, Romulus and Remus, who, contrary to their namesakes, are trying to fell an empire. Many characters act the opposite of what their species would indicate, often in service of the idea that people can change in the face of honest debate. Though starting as species-based archetypes, Aviary Attorney’s characters are three-dimensional beings who grow and change in support of the game’s theme. 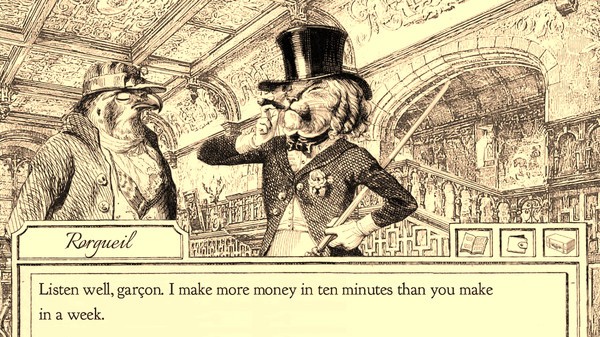 If I’m going to lob any compliant at the game, it’s the actual gameplay. Like the Ace Attorney series, it’s a bit of a hybrid between a visual novel and a point and click adventure. In the investigation sections you click around until you find something relevant; after that, there isn’t much else to do in the area. The only real challenge here is time management skills, as every time you scope out a location you come one day closer to the trial. Even then the challenge is negligible; a modicum of forethought can get you through just fine.

The trial sections are simply choosing from four or five keywords and presenting evidence. The dialogue is still well thought out and the options follow the game’s thoughtful logic, but the options here feel more limited and simplistic than in the investigation scenes. While you’re supposed to be winning over a jury, the mechanics of this are rather vague. They can also ultimately feel a little pointless, since they don’t seem to really affect the outcome of the trials.

Due to the game’s short length, the trial sections never gain enough complexity to give the mechanics a satisfying depth. Ehat little gameplay there is is done well, it just seems weak compared to the strong writing and nuance of the dialogue system. Courtroom scenes, ostensibly the game’s core conceit and where games like Ace Attorney shine, seem more like asides in Aviary Attorney, an unfortunate misstep for a game about the legal system. 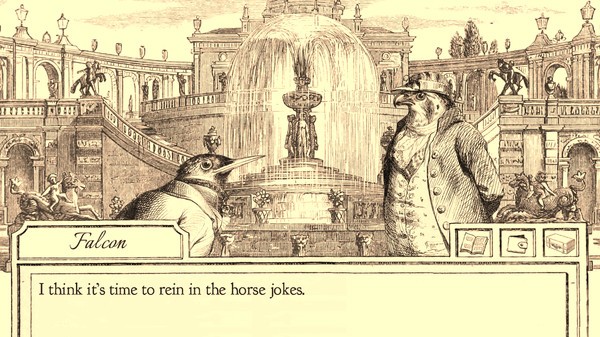 Each of the game’s three endings all feel like natural extensions of the story and characters. None of them feel like a “bad” ending, and each raise even more interesting discussion points. One ending taps into the idea of anger at the corruptness of the courts, while another explores the idea of peaceful revolutions. Despite using the character of Jayjay to represent these extremes, neither of these endings feels out of place, and all the endings reflect back on themes of growth and change.

If I haven’t been clear enough, you should play this game. It is an excellent example of how to write intelligent dialogue that actually compels the player to think. The gameplay is rather simplistic, especially if you are an Ace Attorney aficionado, but courtroom drama fan or not, it’s worth taking a look at.