Off the Grid: Valkyrie Skies

Sometimes a game comes along that just exemplifies how not to accomplish a task, one that fails so marvelously that it becomes wholly entertaining. Sometimes a game has qualities so bad they’re good. Valkyrie Skies is one of these games. On one hand it produces a competent vertical shmup (shoot ’em up) that conveys the programmers’ talent; on the other hand, the writers clearly spent their time floating between the sci-fi and philosophy sections of the local library, ultimately creating dialogue and story so cringeworthy you just can’t look away.

I’m all about putting your best foot forward, so I’ll let the game do the same. The gameplay is solid if somewhat lackluster. You take the role of a rookie space pilot tasked with blowing up the opposing fleet and dodging way too many asteroids. Being a game for your mobile device, controls are pretty simple: you guide your ship with your finger or stylus and it shoots while you’re touching it. You gain access to different ships as you progress; each is different enough to avoid being samey, but barely.

The difficulty curve ramps up at a steady pace, and those looking for a challenge will not be left wanting. Near the end bullets cover most of your screen, and dodging them is tough but not unfair. The game’s smattering of bosses all have different bullet patterns that make them a joy to fight and break up some of the more monotonous missions, though I wish there were more of them, as the monotony inevitably creeps back in. Enemy ships and bullets can apparently phase through asteroids while you cannot, making some missions more of a pain than they need to be, but even this is somewhat minor. All the elements for a good space shooter are here, and while there is nothing particularly wrong, there isn’t anything that particularly stands out either. So I think we’re all sufficiently warmed up for the bile I’m about to spew. 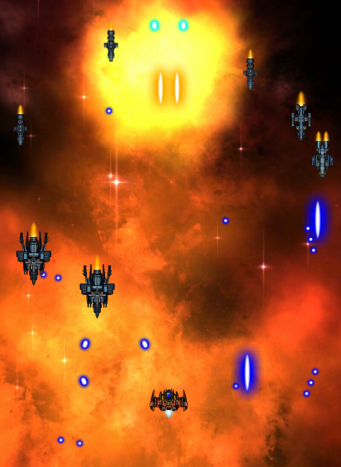 This is an awfully written game that thinks it’s on the same level as something like Dune. There is something to be said for “show don’t tell,” and it’s something this game could stand to learn. Everything we know about these characters is spoonfed to us through lengthy monologues. The player character Cyllis’ backstory is dumped on us by two other characters (spoilers: the only two other characters in the game). We’re told that Cyllis feels camaraderie with unseen members of his squad, but we never see them. Would it have been too monumental to have a generic pilot character just to give us a sense of how Cyllis interacts with others outside of his wooden superior officers? But alas, it’s up to the exposition trio to fill in the blanks while also spouting author tracts.

The stilted dialogue is something that has to be heard to be believed. Everyone talks like they are in the kind of hammy sci-fi movie you’d see on late night TV. For instance, early on Cyllis gets lost and is asked if he needs help; he chooses to answer with an odd line about how he can’t be lost since he has no destination. While admittedly this line is called out, the characters never really drop this pretentious and clunky way of speaking. Additionally, they break into intense monologues about the role of government, religion, and the nature of war with little prompting. These speeches have all the subtlety of an Ayn Rand treatise and fit into the story about as well. The points being discussed aren’t so groundbreaking that they excuse how poorly they’re integrated into the dialogue and plot. The game also fills its loading screen with various quotes that have little relevance to the story; these make the game come across as insecure, like it’s trying its hardest to flaunt its knowledge with no regard for flow or believability.

Speaking of plot, it gets by by being more bland than anything else. It’s all about a war for water in space, though the game’s app store page would have you believe it’s this epic conflict filled with betrayal and conspiracy. As of time of writing I’m approaching the final mission, but these promised plot threads have yet to bloom. The plot serves more as a backdrop for the characters to wax philosophical. Also we have a romance subplot that happens because why the hell not. It’s handled as clumsily as you’d expect, and the leads have the chemistry of helium and argon. 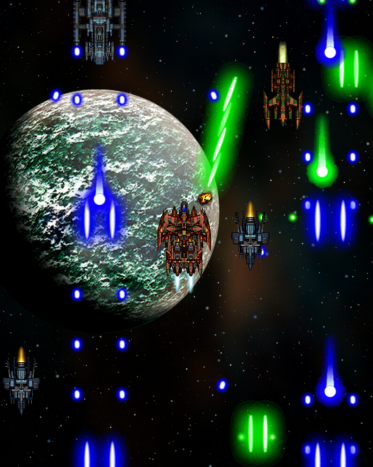 The art assets are somewhat of a mixed bag. Every class of ship looks unique, and I could usually match their looks to their bullet patterns. The two enemy factions are also distinct enough in style to tell them apart. However, the three characters with portraits (again, the only characters) look generic, which befits the awful military jargon they spout between their treatises on religion and government. The music is stellar, giving a sense of tension to the missions and just being generally catchy if you’re into electronic/trance style music; I only wish it would be loud enough to drown out the terrible words the characters speak.

Despite all the muck I just raked up I do enjoy this game. The dialogue and characters are so abysmal and its philosophy is delivered so poorly that it has a certain charm. It’s trying so hard to be serious that it approaches satire and becomes something wholly enjoyable for reason I don’t think the developers intended. The gameplay is well done and challenging enough, but it lacks a certain oomph to make it really stand out and salvage Valkyrie Skies as a whole. Consider it a two dollar lesson in how not to write.