Taylor Hidalgo has always been a cat person.

Not in that I find dogs particularly offensive, but more that they don’t really resonate with me. I like them okay, and we can share space from time to time, but they don’t really do it for me. They’re neat animals, but they do little more than occupy room in my attention without giving me much pleasure or joy in return.

It’s interesting to me that cat people are willing to admit that cats are assholes and still say they’re a cat person beneath their mild grumblings. Although there’s something universal there for all pet owners, I think—something just a bit beyond simple thought perhaps, that taps into something primal. Maybe it’s companionship, or professional interest, or compassion for the living creature, or just a unique obsession that settles slightly beyond the borders of reason, but pets somehow tap into something joyful. There is an innate pleasure in being a part of something else’s world, rather than just acting alone in one’s own.

Maybe that same pet owner’s joy is the reason I’ve found myself regularly checking Neko Atsume on my phone and catching myself cooing over the chubby fluffballs that pass by my yard and leave me little fish. It’s a self-affirming exercise, getting fish for attracting cats and spending fish to attract more cats, but it’s a novel experience all the same. The cats themselves are… pointless, really. They have names, favorite toys that will make them visit more often, and power levels that don’t seem to correlate to anything. It’s a kitty Tamagotchi that replaces the tiny pixelated creatures with bigger, cuter, floppier cats that bat at balls, claw up scratching posts, eat unnecessary amounts of food, and stubbornly reply to decadent and lavish gifts with almost no fish, without any apparent reason.

I mean, they’re assholes, so I don’t really expect much else. 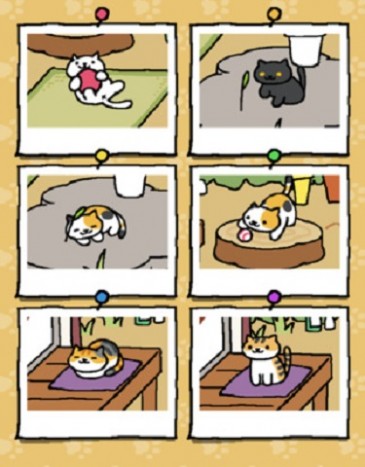 But I still go back. I still check my yard to see how the kitties are toying around with the things I leave out for them; I find some solace in the quiet laziness of getting to see the occasional stray cat elect to curl up in the hammock I left outside. There’s a lot of joy there, even if it’s an entirely distant one, a one-way relationship with the cats that can elect to do things in a yard I can’t reach or even manipulate in anything but a mostly passive way. I like seeing the cats there, and I like earning enough fish to give them something new to look forward to. Hopefully it’s something some generous cat will like enough that I can earn valuable fish to buy more things to attract more generous cats. But it’s still a step removed from what happens onscreen.

As a game, it’s terribly mechanical. It has nothing but trial and error and resource grinding, and even that is rudimentary. Even a mostly static yard can earn resources, only needing the occasional moment’s attention to fill the food bowl. There’s nothing intellectual or cognitive about the experience; it’s just an experience. As a game, it’s just a single screen, a menu, and a bunch of cats you can’t interact with. It’s a walking simulator that forgot to add walking. 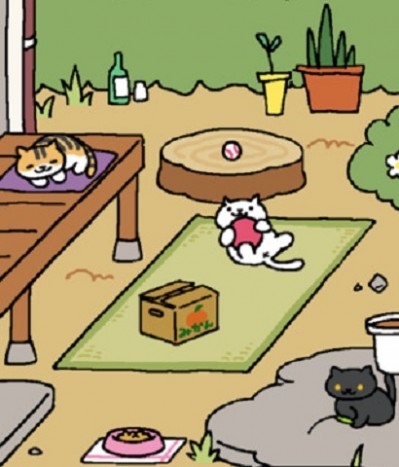 However, somehow it manages to tap into the same primal compassion for animals that makes it enthralling, much like having cats themselves. I’ve lost count of the amount of times I’ve been out in public and had an “Oooh” or “Awww” slip out at my phone screen. Something about the cats and the possibility that they might love the things I’ve willfully left out for them sneaks past the logical wiring and gets straight at the kittens-and-puppies neurons that cause squeaking at the sight of baby creatures, human and animal alike.

Neko Atsume’s biggest success, then, lies in taking something almost exclusively passive and digital and making it charming all the same. There’s no single part of Neko Atsume that should be much more than a download, five minute play, and swift uninstall, but it manages to have staying power. The amount of screenshots and discussions on the subject that make their way to Twitter touch on that weird intrigue about it. It’s so much more than just… cats. More than just another obligation to maintain.

But it’s possible that the mountains of people playing Neko Atsume are all cat people, just like I’ve always been. Maybe it’s just a cat thing. The jerks.