Zelda Would Make A Good Archaeologist

When Breath of the Wild’s Link wakes up from his hundred-year sleep in a mystical tomb, his memory is fractured and his world is in ruins. But as Link explores Hyrule, it’s increasingly clear that it was covered in the remains of ancient civilizations even before the most recent Calamity. In select places around the world, the player can activate short cutscenes. Those often feature Zelda, Link, or their assorted companions as they piece together their doomed strategy to activate the artifacts and constructs of the long-dormant Sheikah culture. Zelda, in particular, appears in these scenes as deeply and personally invested in the exploration and activation of the world’s ruins.

As players, we only catch brief glimpses of Zelda and her archaeological interests. More often, those scenes present character introductions for heroes of the various cultures of Hyrule as they set off to direct the Divine Beasts, constructs of gargantuan proportions and enormous environmental power. In many of those scenes, Zelda comes across as irritated with Link’s status as a destined hero, someone who carries a magical talent that enables him to grasp and wield ancient artifacts. As Zelda herself explains, the Sheikah shrines that pepper Hyrule’s landscape seem “designed to be exclusively accessed by the sword’s chosen one,” which is to say, Link. Gazing up at the sky after saying so, she continues, “But designs can always be worked around, at least I hope.”

In such flashbacks, Zelda is often portrayed as being driven to unlock the secrets of the Sheikah culture as a means of protecting her kingdom. This regal framing makes sense in the context of the series’ usual plot and character structures, in which Zelda is chiefly a princess. Sure, in some incarnations (as in Ocarina of Time) she can be a more independent character with a prankster streak. She’s previously disguised herself as a Sheikah warrior and been in contact with sages from Hyrule’s history. But perhaps being driven by royal purpose is just convenient window dressing for Zelda. Maybe it is her fascination with the previous cultures of Hyrule that motivates her, rather than more instrumental, immediate desires. 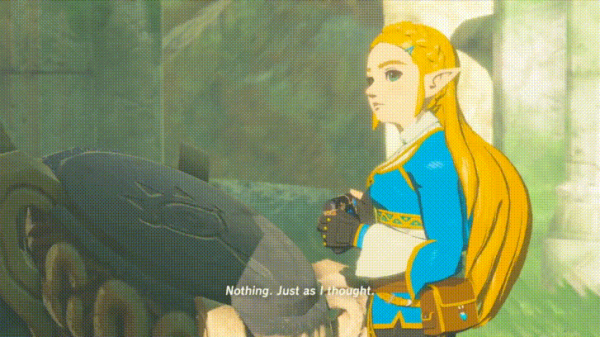 Zelda amidst ancient columns, trying to activate a dormant shrine

It would be fitting for the Legend of Zelda to further incorporate the cultures and histories of Hyrule. While Breath of the Wild introduced more worldly interactions to the series, particularly in terms of abilities that manipulate aspects of the environment, there are very few ways to deeply investigate Hyrule’s cultures. Those cultures are everywhere on display, from costuming to customs to old memories, histories, and songs. But for the most part, those aspects add flavor and detail to the world rather than becoming focal points of the story. Interaction with those rich cultural elements is limited and, again, largely instrumental to the purposes of exploration, combat, and the progression of Link’s heroic narrative. For example, Link might hear about how to find or unearth a shrine from a character like Kass, a wandering troubadour and accomplished concertina player. But in the end it’s just another route to another life- or endurance-enhancing spirit orb. Zelda, on the other hand, might be more curious about how Kass’ oral histories fit into the lineage of his people, and for that matter, the peoples of Hyrule.

Folklore and oral history blend into one another, freighted with knowledge and meaning. Characters might be expected to understand the myths of Hyrule quite differently from how players do. For example, there could be many flexible interpretations of the meaning of a rhyme that Kass relays from the top of the Gerudo Tower:

As light shines from the northwest skies,

From the tower’s shadow an arrow flies.

A player might pay the most attention to things that change or can be manipulated in the game’s world. The first line suggests waiting on the tower until the sun or moon is in the northwest, then the second might invite players to look for the shadow that the tower casts. From there, the player might shoot an arrow through a glowing point in the landscape to reveal a shrine. And, sure enough, that’s the route to take if a player wants to complete that particular Shrine Quest.

Alternately, the characters in the game might consider the rhyme not simply as a clue, but as poetry and folklore. Zelda might ask why the Gerudo tower is located in just such a way that its shadow is significant for navigation. Further questions could emerge: if it’s a gigantic sundial, nestled in a desert canyon, who placed it there? What importance did it have? What do the current locals think about it, and have they adapted it to a new purpose? Yes, in Kass’ framing of the rhyme, it’s part of a heroic epic—implied to be Link’s heroic epic—but is that the whole, singular meaning of such a storied, landmark structure? 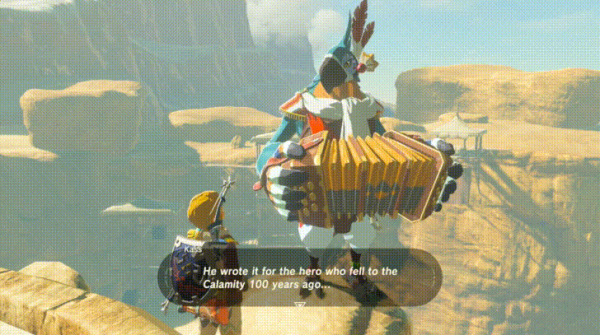 Kass describes the history of his music and his teacher to Link.

This line of questioning and the flexibility of readings and meanings embedded in a game world find a ready analogue in the recently released Heaven’s Vault. That game is explicitly archaeological in its orientation, with a focus on language and translation, artifacts and environment. The game’s characters inhabit a world whose historical beliefs have come together into a complex religion dedicated to cycles, loops, and predestination. Much of what the main character uncovers, as she explores and deciphers a galactic past, explains that structure and also enables it to be challenged. In some ways, the pervasive stories about “the hero” that Link encounters throughout the regions of Breath of the Wild are similar. However, most of those stories are also very limited, springing from events just one hundred years before and, for some, still within living memory. As Link happens to be the same hero, struck with amnesia, those stories reinforce that the game is about his past and his journey, rather than the cultural history of Hyrule. Other mythical figures, prominently one for each of four regions in Hyrule, are also very recent in historical terms. Each is conveniently included within the game’s narratives primarily in relation to Link. In other words, much of the histories that Link encounters just happen to be about his own past activities, given a slight historical gloss.

Although much of Breath of the Wild is centered around the Hero, its world also hints at a deeper past and cultural history. While Link, as a character, is limited in his engagement with this history, exploring Hyrule from another perspective might allow it to take a greater role in the game’s narratives. While Zelda’s interest in shrines and artifacts is linked to a desire to use their power to prevent disaster, that same desire could grow into a motivation to deeply understand the cultural and material history of Hyrule. Further, as Patricia Hernandez has pointed out, the Sheikah do not appear to be the only predecessors to the present day. Perhaps Zelda could set about a deeper investigation of the past, as well as its transformations into the myths and beliefs of the present.

Imagine a playable Zelda who has a very different orientation to her world than Link. Rather than a gameplay focus on moving through shrines and temples for the material rewards that they offer, playing as Zelda might embrace some of the ambiguity of archaeological work. This might take the form of traveling Hyrule and hearing its myths from characters like Kass, then heading out into the field and searching for clues that could illuminate the relationships between folklore and history. In the field, Zelda might compile journals of clues from long lost languages, create casts and rubbings of inscriptions and reliefs, or even lead digs and excavations. In short, I imagine a more social and grounded Zelda, one who has more direct interaction with the spaces, stories, and cultures of her world.

Don Everhart is a sociologist who thinks video games are good to think with. You can see more of those thoughts on his blog or Twitter.
Tags: Breath of the Wild, The Legend Of Zelda
← Not a Hero, Just a Postman
Off the Grid: Ghost Trick →