Monkey Island? Day of the Tentacle? Ron Gilbert’s new game The Cave predates them both by premise. The result of 25 years of slow mental gestation, this set of seven unlikely (well, one likely) explorers pursuing their greatest desires within a talking cavern was an idea that came to the former Lucasarts maestro long before Guybrush Threepwood.

This game could have been special. It has an intriguing setup in making most levels dioramas unique to the characters selected by the player, and there’s genuine originality within these levels when they act, almost, as gradually developed dramas revealing the sinister motives our silent protagonists don’t want to talk about. Unfortunately The Cave serves as a sad example of a weakly executed premise prone to sabotaging individually excellent parts.

We know Double Fine can write. As always, the only complaint with their extravagantly humorous dialogue is that there isn’t enough of it. Every sentence is laced with witty self-awareness of its own tropes and affectations, to the point where avid Let’s Players may feel uncomfortably redundant. For once the desire for more sharp dialogue really is a genuine complaint, though, as the main cast remains silent, leaving the gregarious cave itself to become the central character. Except he only infrequently barges in. This restraint far too often turns The Cave into an eerily subdued experience.

We know Double Fine can create bold, visually distinctive worlds and characters on a whim. The blend of styles featured in this game are all capably refitted in characteristically bold fashion. Hidden in The Cave‘s depths are a surprisingly broad range of settings, including an Egyptian pyramid’s bright, lethal interior, a moody Victorian home and a metallic nuclear silo. Plain, unremarkable rock faces may predominate, but variations in detail prevent the monotony that samey backgrounds could create. And when, on occasion, the mystical cave’s confines expand to reveal vast, vivid backgrounds, these yawning vistas impress without overwhelming the crafty details dotted around the closer surroundings.

And of course we know Double Fine, with Ron Gilbert at the helm, can create intelligent, intelligible puzzles. All of them convey their specific demands well enough, and whenever I failed to notice something, it was my failure to observe, not the game’s failure to communicate. Clarity may be a curse here, when no puzzles have that stunning, revelatory twist past Lucasarts puzzles seemed to specialize in. The promising multi-character puzzles especially tend to degenerate into pedantic exercises in lever pulling and crate pushing. 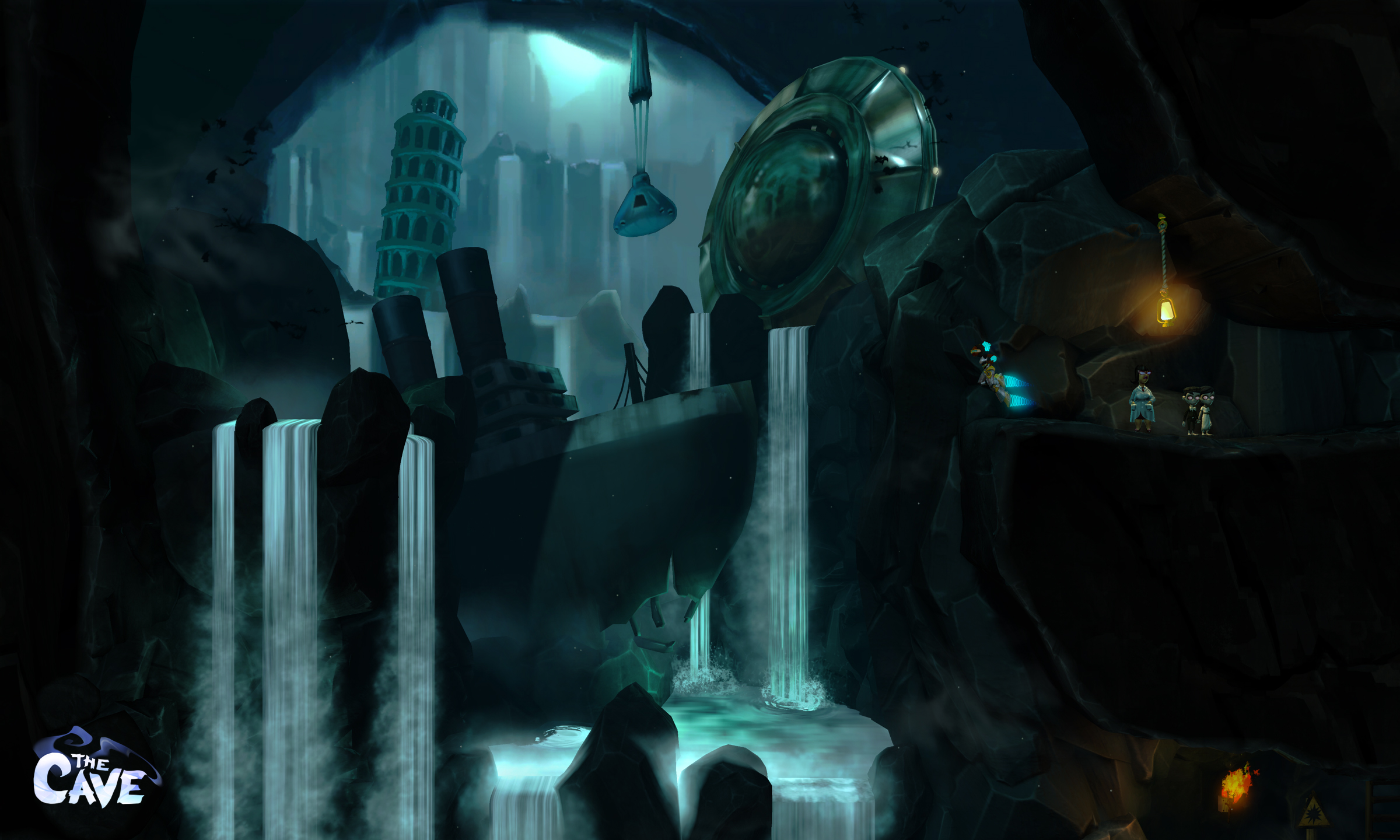 So, what’s the issue that dismantles everything good in this game? It’s with platforming. Specifically, the kind of shoddy platforming forced on an adventure game. Few straight lines will be found in The Cave. Instead, paths constantly bisect, elevating, descending and looping to form an intermittently contiguous cluster of routes. To reach any puzzle you must you must first jump, climb, swim and fall along various convoluted, erratically interconnected routes. You may often sight locations the width of a wall away while following one branching path, when the actual path leading to it is in another direction entirely. Once the area has been scoped, and the scenery admired, the unintuitive map layout becomes an irritant.

It’s a joy to watch your characters in motion, every step made with deceptively smooth fluidity, but clumsy controls ensure any sense of grace remains firmly illusory. Even if the game never demands extreme precision, unresponsive movement robs the platforming of any of its fundamental satisfaction, quickly turning it into a chore. As the necessary ritual between every novel setting and hilarious set piece, this lousy, misconceived platforming is utterly inexcusable, especially when across the industry, less experienced studios routinely master something as pivotal as 2D platformer controls.

The multicharacter system, too, only erratically fulfils its promise. While the impact your party composition has on the structure of the game is interesting, beyond a broad influence over which sequence levels appear in, the idea rarely expands available puzzle solutions in the way it could. Most scenarios that exploit multiple characters are obvious, dull affairs of levers, switches, pressure plates and crates. Lots and lots of crates. Occasionally, a multicharacter solution will imaginatively take advantage of a character’s unique ability; more frequently, they’ll be matters of interchangeable character placement, easily identified but tiresome to execute. Sometimes, a specific character in your group can use their ability to bypass a puzzle entirely, but these opportunities are rare – and worse, uninteresting – methods to circumvent puzzles in a single convenient step.

In design and controls The Cave seems to invite the unwelcome specter of tedium we depend on games to banish. With three characters available at almost all times, the absence of tools available to manage them does nothing but multiply the tedium by three. Often, once a character passes an invisible threshold, the rest are instantly transported to the new location. But sometimes not. And with no indirect commands to move characters simultaneously, no option is available except to manually move each character, one at a time, to the required position.

A unique premise is useless when potentially interesting parts only surface between unwelcome platforming jaunts. Playing The Cave feels nearer to fishing than it does to spelunking, passages of uneventful quiet interrupted by brief moments of excitement. A minor lapse in Double Fine’s high standards of comedic ability still results in a funny game, but failing to meet even their own inconsistent standards for gameplay renders this barely functional. Perhaps a more traditional adventure game would have worked better, and I hear they are working on one too.

Tags: Issue 3, The Cave
← Unnatural Selection
Off The Grid: Disordia →