Sunlight catches the desert haze, sifting light through the veil as dusty coughs emanate from the tailpipes of rusty jalopies and broken machinery. Worn signs tell of faded histories, the accumulating dust covering up vivid memory with barren apathy in a forgotten desert watering hole. A vulture squawks in the distance, foretelling death’s harsh presence in a land seemingly outside time’s grasp. A simulacrum of Salton Sea and abandonment, colossal mountain panoramas frame the trailer trash and gasoline truck stops nestled in a lonesome Californian valley.

There’s beauty in the disheveled Californian landscapes that define San Andreas in Rockstar Games’ herculean effort Grand Theft Auto V. Under the shade of towering palm trees and tattered Googie signage, this beauty lives in the breathing, flourishing world of the city and surrounding countryside. Too bad so many missteps spoil the hushed tranquility of Rockstar Games’ triumphant landscapes.

The center was not holding. It was a country of bankruptcy notes and public-auction announcements and commonplace reports of casual killings and misplaced children and abandoned homes and vandals who misspelled even the four-letter words they scrawled.

Travelling away from the bygone fringes of Sandy Shores and parallel to the sparkling waters of the Alamo Sea in a drop top convertible is one of many leisurely pleasures in this game. Low-flying aircraft seem to greet the laziness of the day with aerial aimlessness, swooping past the gently rolling hills that dip into translucent waters. The countryside gradually rises away from the evenness of the Grand Senora Desert, rhythmically rising and falling with cracked roads that dance around the curves of the land. 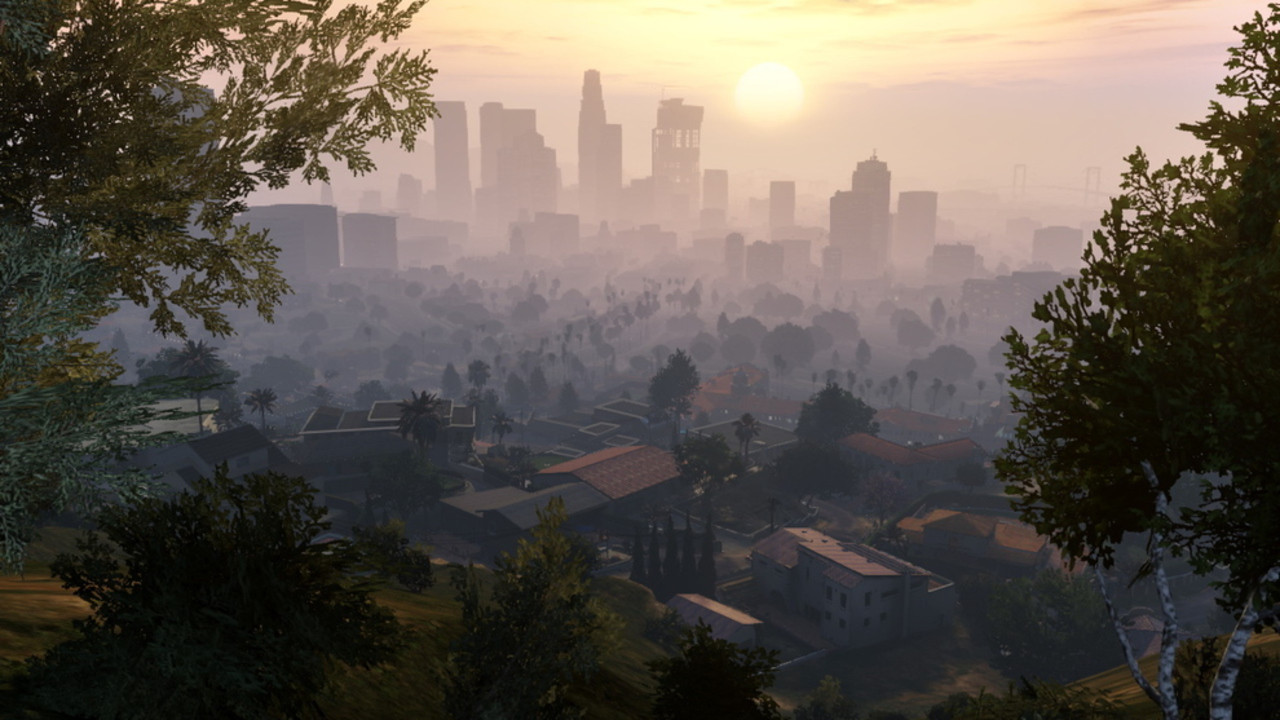 The lavishly winding roads of the Great Chaparral and the Tongva Valley yield to the narrowing lanes of Vinewood Hills and the expressive vistas overlooking Los Santos proper. A perfectly placed bend in the road provides a breathtaking, unimpeded snapshot of the city covered in a morning vapor, evoking the receding blur of atmospheric perspective in landscape painting. Bathed in orange and purple glow, the distant, soaring skyscrapers block sunlight from filtering through in a remarkable contre-jour of backlit profiles.

The light of daybreak throws the smooth surfaces of the cityscape into sharp relief, revealing the smaller microcosms of activity that branch out from the central hub of downtown Los Santos. There’s life down there in the welcoming valley of this metropolitan sprawl, assuring a pleasant foray amongst lively characters and expressive narrative beats like a Wim Wenders film or a Joan Didion novel. Too bad any and all female characters here are cast aside as insignificant outside of jokes.

It was a country in which families routinely disappeared, trailing bad checks and repossession papers.

This isn’t the first time Los Santos and the half-remembered nostalgia of Joan Didion prose have intersected. A wonderful piece from Jon Irwin on Kill Screen captures the definite sense of place in Grand Theft Auto V and its luminous, near mythic quality, as though born from a dream. Indeed, the cascading waterfall of pale mansions and moneyed architecture of Vinewood Hills flowing down into the grimy glitz of Vinewood Boulevard seem like an hallucination that only celebrity wealth can afford. These tight roads spill into the multilane boulevards of Los Santos itself, teeming with flashy billboards and bustling city life threatening to swallow you up whole.

Bumper-to-bumper traffic slows reality to a standstill, sharpening perception of your surroundings and the beautiful trash of downtown Los Santos. Everything from discarded fast food cups and crumpled newspapers to the crumbling infrastructure and social decay at the heart of this fully realized, decidedly meaningful funhouse caricature of contemporary Los Angeles. Too bad your eyes will meet a juvenile sex pun in an otherwise adult-oriented story. 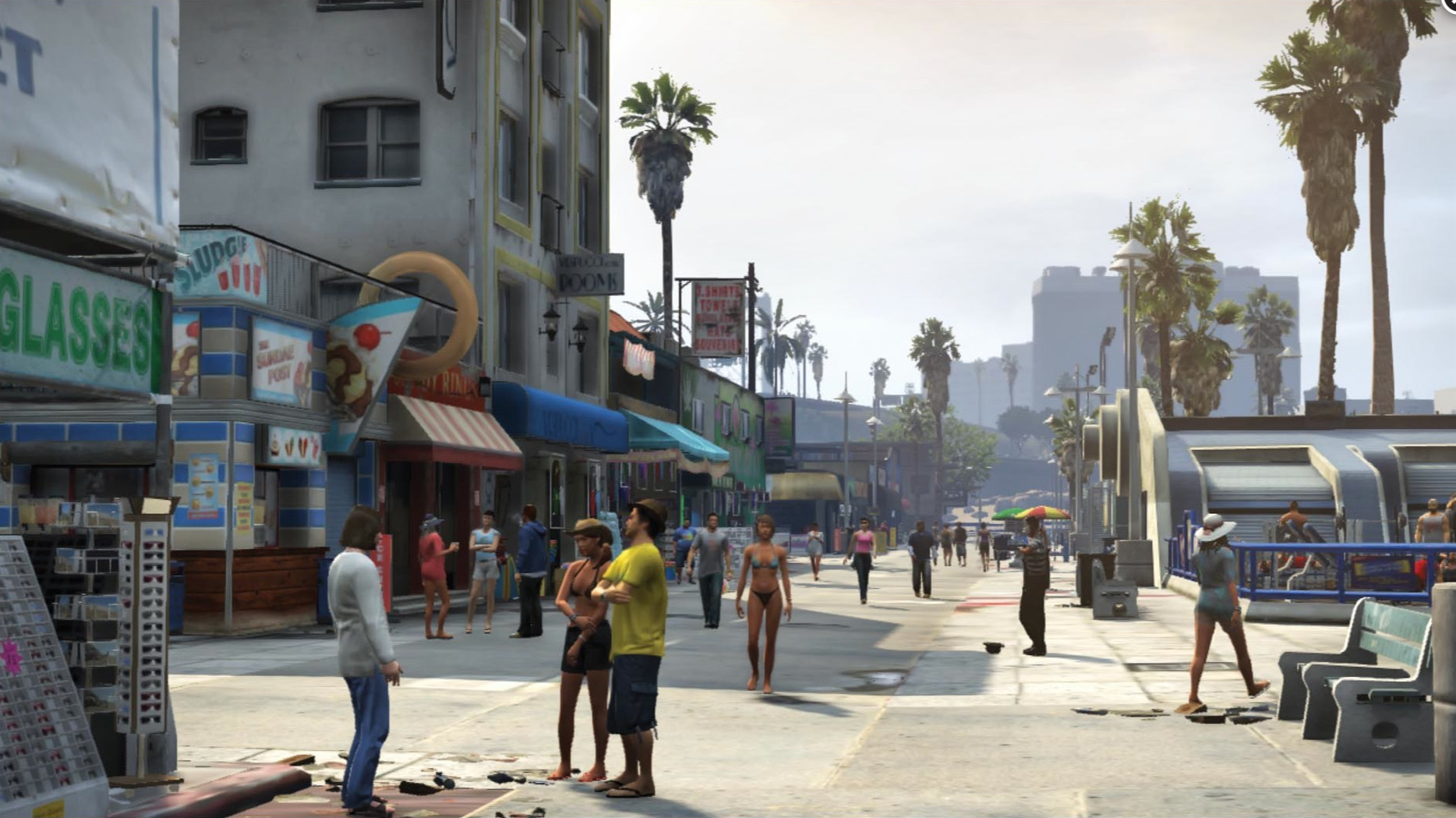 Overhead cloverleaf highways stretch in all directions, recommending divergent routes to explore this massive city. Snug side alleys provide sleazy hideaways for crime and corruption, but also quick avenues into every detailed nook and cranny the metropolitan gridlock has to offer. Rowdy, smoky bars invite a night of intoxicated delight. The swanky, polished gloss of high-end storefronts drains unsuspecting wallets.

The wealthy array of Los Santos’ downtown distractions eventually cedes to the open waters of the surrounding ocean, and the cozy beachfront properties that overlook these sunny escapes. The graffiti-laden, swarming shanties of Vespucci teem with marijuana dispensaries, cheap grub, tourist trap attractions, and bargain-basement souvenir shops that engross willing passerby. The savage allure of this tacky reach of Los Santos is pleasantly satisfying and sufficiently animated. Too bad the game’s antagonists don’t reach the same level of memorability.

Adolescents drifted from city to torn city, sloughing off both the past and the future as snakes shed their skins, children who were never taught and would never now learn the games that had held the society together.

Just across the way from Vespucci lie the upscale condos and spotless boardwalks of Del Perro, radiating the summer coastal vibes of oceanfront retreats as the Great Ocean Highway withdraws into picturesque seaside vistas that graze the lapping watery foam alongside it. Overpriced amusements on a rickety boardwalk and overcrowded beaches don’t dampen the allure, but instead sustain the power to produce childlike gaiety and wonder in a metropolis that’s all-consuming.

Los Santos is a surreal place, home to a kaleidoscopic populace and an abundance of off-kilter landmarks that form a vivid whole. There’s a straightforward sense of freedom here, not only in the world’s open expanses of landscape, but also in the underlying promise of secret possibility just waiting to be uncovered behind the verdant greens and sunny valleys of Grand Theft Auto V’s Californian facsimile. 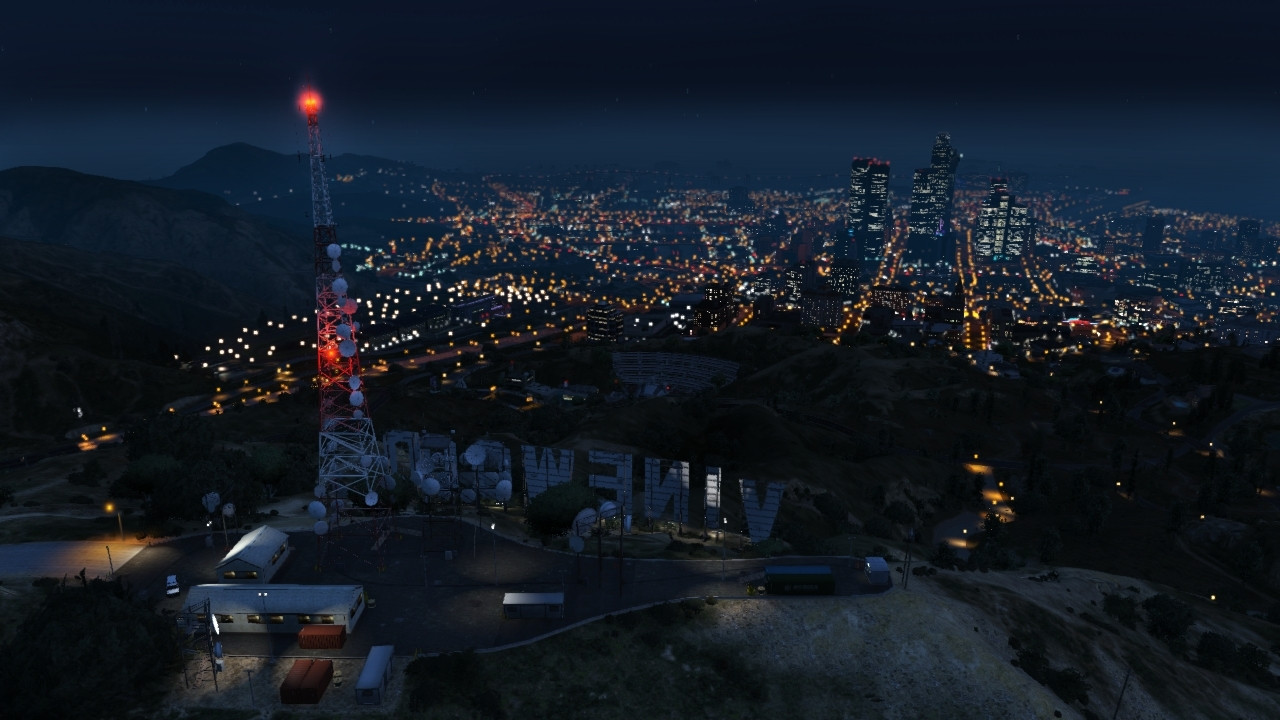 Rockstar’s team has painstakingly crafted a lively, comfortable home worth delving into to discover its whispered tales of fascination and enigma. It’s too bad then that Grand Theft Auto V lacks the storytelling strength and memorability of previous Rockstar titles, undercutting its sumptuous digital paradise, and rendering it little more than an empty badlands for familiar videogame motions and narrative beats that leave no lasting marks. It’s unfortunate that Los Santos becomes little more than a mythical essence of a nonexistent greater work because there’s definitely something to this fabricated landscape worth exploring.

For now, we’ll have to silently accompany the ceaseless passage of visitors flowing back into the city in the hopes of a better tomorrow, slouching towards Los Santos.

Miguel Penabella is a freelancer and comparative literature academic who worships at the temple of cinema but occasionally bears libations to videogames. His written offerings can be found on Unwinnable, PopMatters, First Person Scholar, and Medium Difficulty. He blogs on Invalid Memory.