Francisco Dominguez shares his thoughts on the games of Birmingham’s Rezzed convention.

In gaming, the only thing we’re used to seeing snowball is costs. Threaks were the rare beneficiaries of a positive snowball effect regarding their debut musical platformer game, Beatbuddy, when Austin Wintory noticed the former student project, now four years in the making. The composer, best known for Journey’s soundtrack, helpfully bundled himself into superscribe Rhianna Pratchett, who is now providing additional story supervision and editing on the game. As each of Beatbuddy’s levels is already distinguished by the contributions of various musicians and artists, the talent of such high-profile gaming figures can only be a welcome addition.

Judging by the demo, the calibre of work already featured in the game was always highly impressive. I thought Rayman Origins had set an impossible standard for 2D art design, but these guys have met that level of craft and detail in their visual style. Beatbuddy, the titular strange, blobby floating dude, is equally well realized, with plenty of cute, languid animations to decorate his smooth movements.

Platformers may often spur players on with cacophonous melodies clamouring in the background, but those operate on a detached plane. Not so here: The screen is littered with features that all throb in time to the music. That music is what underpins the game, so it’s useful that it was utterly terrific in the demo I played, gradually introducing more layers while retaining the original infectious tune.

Walls made of bubbles become permeable in time with the snare drum. A correctly timed button press combined with forward movement and you’re through. Later, when you’re driving a vehicle, rhythm becomes entirely integral to movement of any kind. Propulsion only comes through those timed button presses, mistime them and listless floating is the only result. I took a while to get the rhythm, but once I did, it felt hypnotically engaging.  Avoiding dangerous obstacles with sharp, defined bursts of movement with every beat provided an interesting challenge.

I only tried an early section of the game on show, stuffed with tutorials, so the mechanics I saw were necessarily basic. Nevertheless, they showed a promising introduction to the game, just no definite proof of concept. With a solid collection of artists and musicians creating sets to build gameplay on, if a variety of interesting ways to engage and visualize the range of music can be devised, then there’s every sign that the final game could be something pretty enthralling. 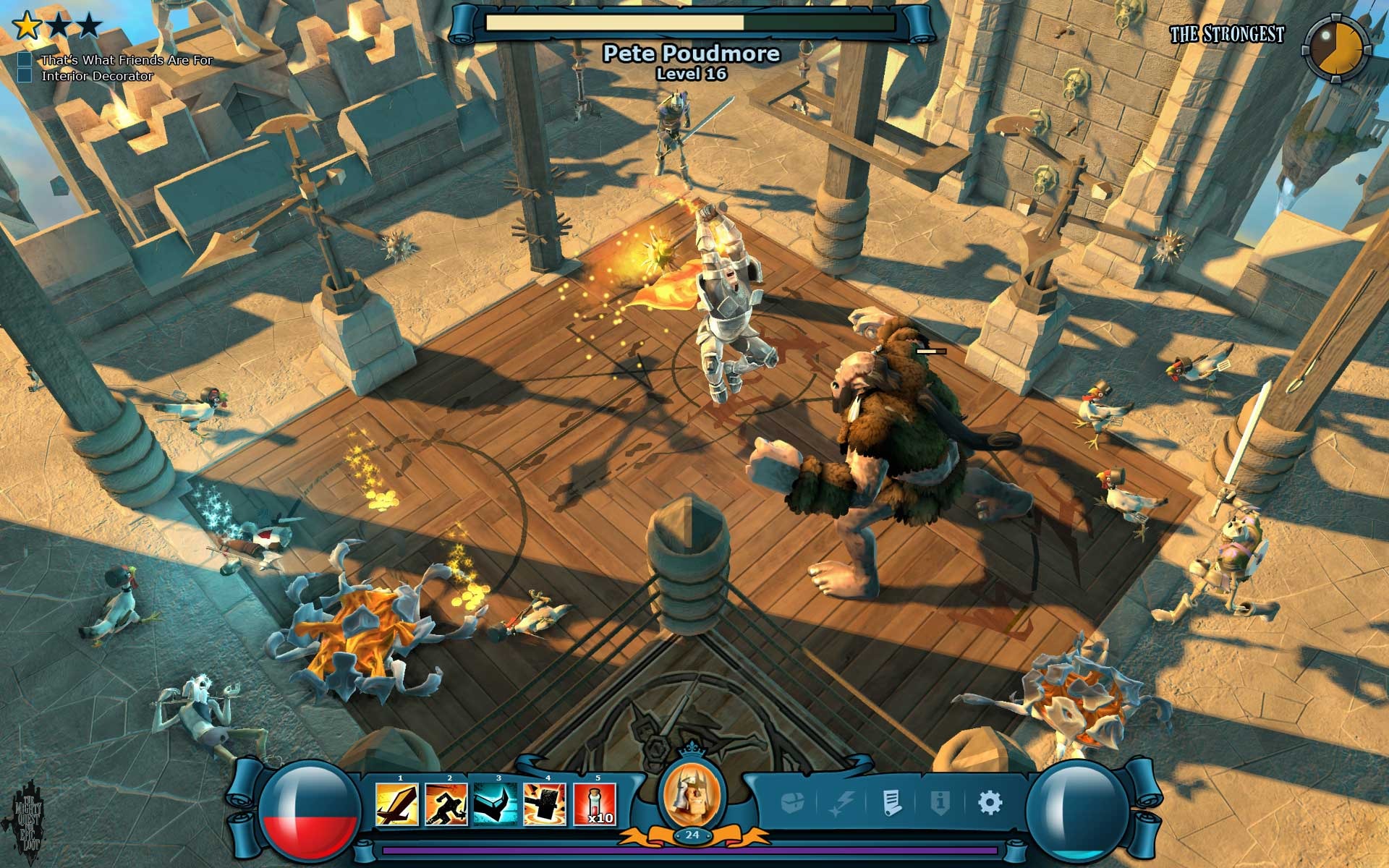 Ubisoft’s free-to-play castle-raiding game had one of the most popular E3 trailers last month, which happened to be heavy on the humor but perspicuously light on gameplay. First, a disclaimer: I may have been distracted from the game by directing feeble trash talk at the Irish guy sitting next to me. I also took a single chocolate coin from Ubisoft’s chest, so my views and integrity are as rotten as my teeth.

Mighty Quest for Epic Loot looks impressively polished and fantastically conceived on a visual level. The bestiary especially contains a good variety of imaginative, lumbering minions, my favorite being the walking, tentacled chests. After all, it’s always nice when the loot comes to you.

What surprised me was how soon each castle fell to my not-especially fearsome charge. I essentially traipsed past traps and monsters, felling them with nonchalant ease (plus an assortment of glittery magic), stumbled to the end, then did it again in another castle.

However, what a demo unit can’t convey is how those castles scale as you level up. Increases in size and enemy numbers could mitigate any excessive ease of progression, but might in turn be mitigated by simultaneous equipment upgrades. I am unconvinced that a timer dictating the amount of loot you get for medieval breaking and entering will prove sufficiently engaging.

The castle runs isn’t everything the game offers though. I fiddled with the castle defense screen and although I couldn’t fully fathom the extent of customization available – beyond rearranging some rooms and dumping pliant monsters in unoccupied space – it seems promising. Deep down, I pine for a real-time confrontational battle akin to ACE Team’s Rock of Ages, but the satisfaction of a well-planned castle deterring all would-be plunderers could be enough. I wouldn’t know. My castle was in flames by the end of my playthrough after repeat plunderings. 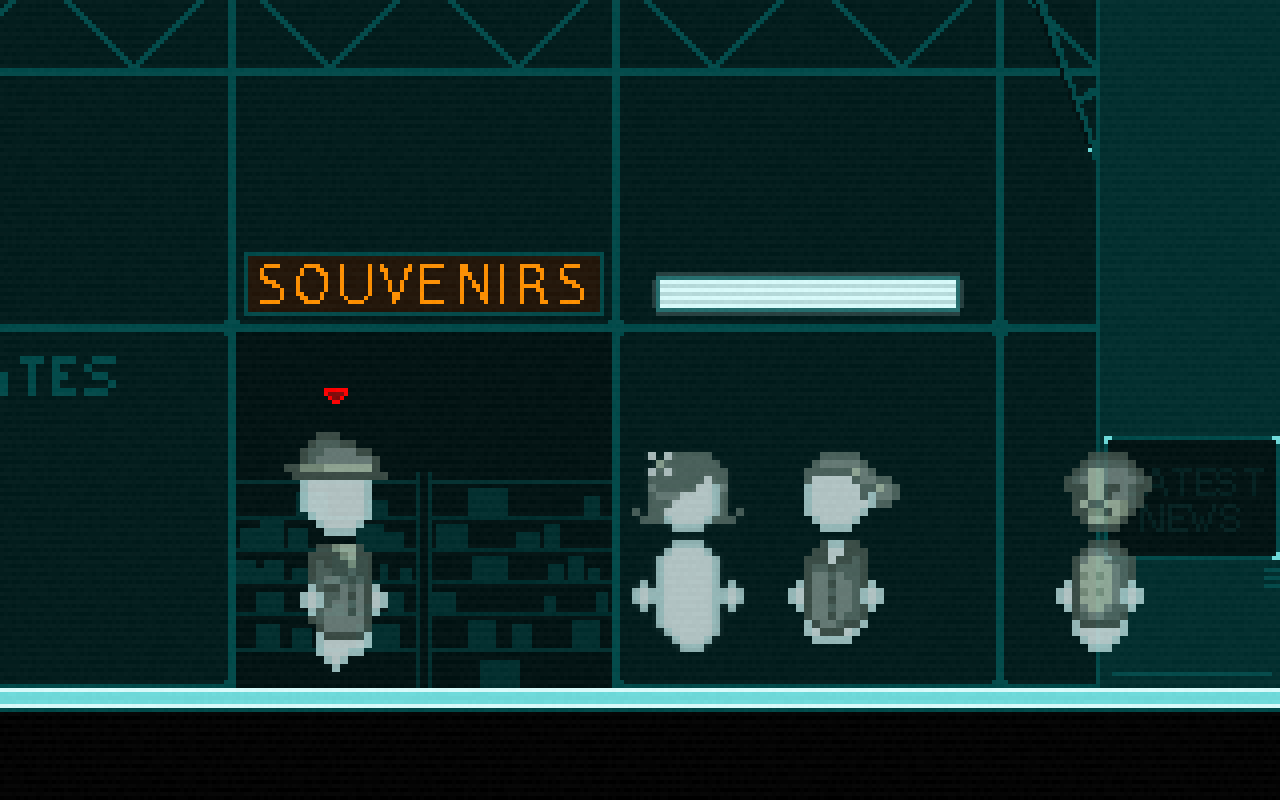 Coming after Richard and Alice, the thoroughly British, topdown mystery-adventure about, you guessed it, atrociously dreary weather, Owl Cave’s next game is a side-on adventure set in a dingy virtual world where you play Antony Lira, a digital detective.

Appropriately for a game set in a literal manifestation of the information age, hacking is a key mechanic. In an interestingly clash of a high tech setting with low tech mechanics, one form of hacking minigames are simply anagram puzzles. The premise feels solid, although the build I played capitalized first letters and left chunks of the actual words intact. That seemed to me one concession too many to user friendliness, in the same way sticking a nasal drip in a guest’s nose feels once they’ve confirmed that yes, they do want a drink.

The puzzles themselves are nothing groundbreaking, but their implementation has promise. You see, starting a puzzle begins a timer which remains persistent for other puzzles across the area. When the timer maxes out: game over, the practically omniscient surveillance system has caught you. That system should provide an interesting source of tension – or failure in my case.

Beyond mechanics, I should point out the game features some degree of social commentary in its world building. For instance, an interesting aspect of its virtual world feels especially true of gaming culture: costumes. An avatar’s clothing denotes class in the virtual world as well as the actual. Even in the supposedly democratizing internet, class division remains stubbornly inescapable. Touches like that are just the kind of thing I can dig, even in a rather basic game. 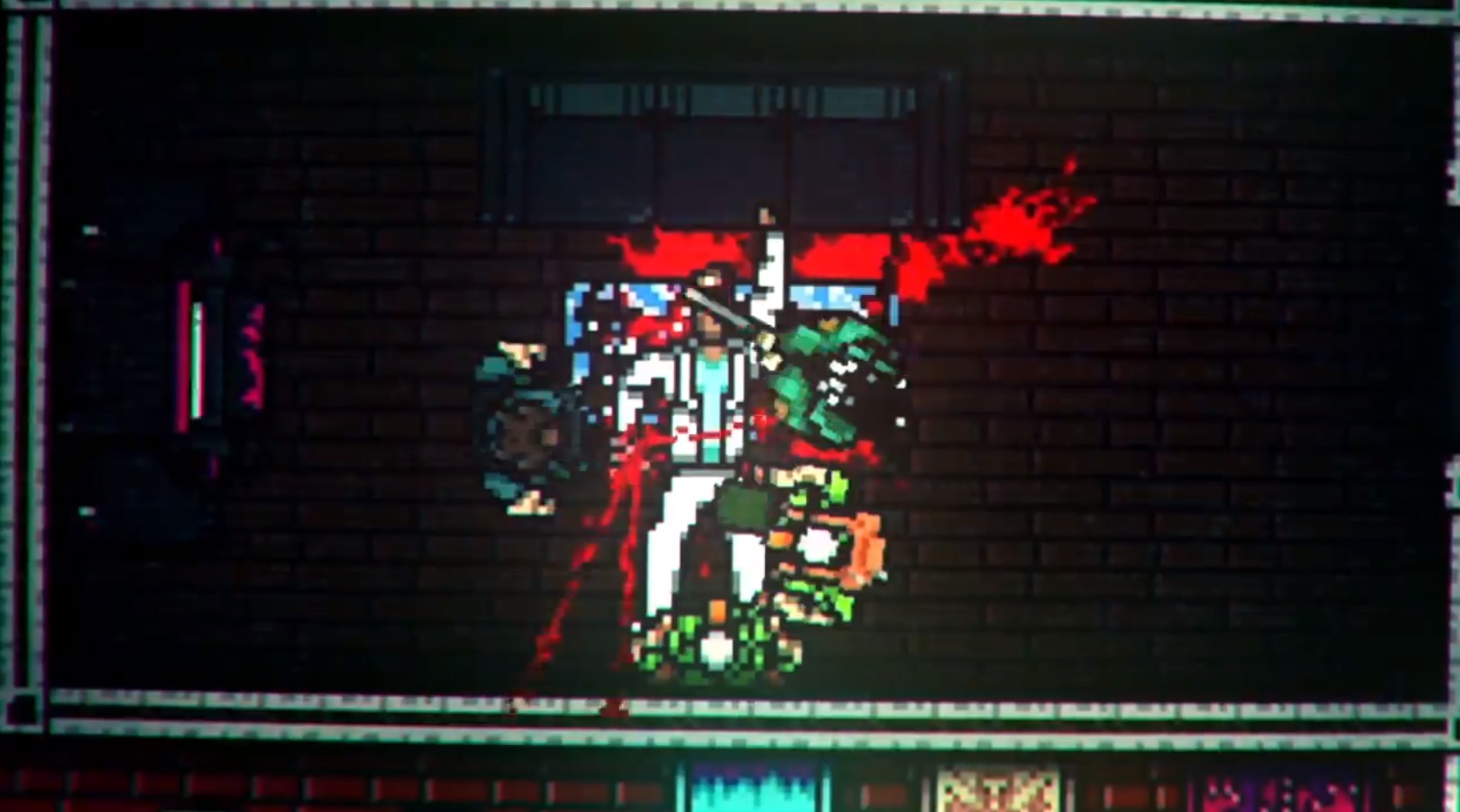 I’m unsure what there is to meaningfully report on Dennaton’s followup to last year’s breakout hit. But I can certainly confirm that yes, the breaking and the hitting remain gratifyingly intact. A friend commented that the throwing mechanic seemed faster, and I’m sure innumerable background tinkerings have refined its methods for enacting the most brutal of violence. However, my keen eye could only detect one unfamiliar weapon (a chain)  and nothing else new.

With a rape scene early on (which tries to excuse itself with the revelation that it’s part of a porn shoot) and a vicious group murder later, I can’t help but wonder if the developers feel a misguided obligation to top their previous game’s outrageous excess. I sincerely hope not. Remember when Call of Duty: Modern Warfare was able to shock with its audacity? Before the series got caught in its own cyclical trap, it didn’t have to escalate events from game to game for ever decreasing returns. As this seems set to be Hotline Miami’s last disco dance into the neon-lit night, it won’t be a recurrent issue, but I’m still as apprehensive as I am curious to see how the sequel will try and compete with the monumental first offering.

Oh, and the music’s still fantastic too. 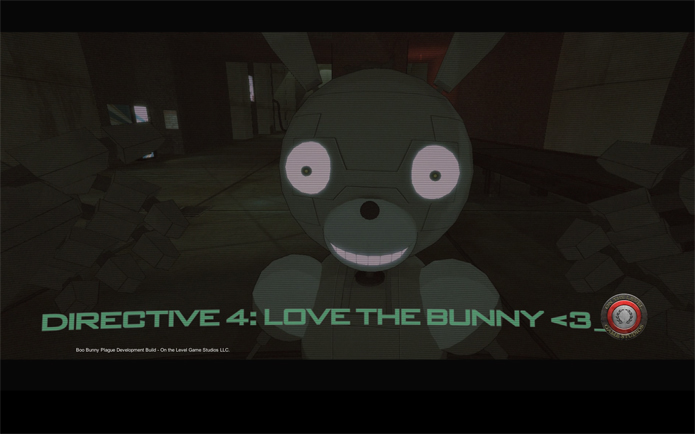 For a comedy musical action-adventure game, it bodes poorly when an early demo is unfunny, set in literally one constrained steel corridor and contains a deliberately raucous musical number that aims below “legitimately good” for “gratingly funny” and misses anyway.

It’s a shame. The story of a guitar-swinging robot bunny rocking through the multiverse could be so much better. Yet unfortunately the best part of the short demo I played was the ending credits sequence: A playable Super Mario sidescroller riff with none of the obnoxious sub-Nickelodeon voice acting.

Perhaps much more inventive variation than I witnessed could salvage the game. However, I probably shouldn’t expect Frog Fractions – The Musical. What I saw of the script and mechanics present left me expecting little from a game that surely depends on both. And still no attempt to make musical songs interactive – this is a personal gripe, but why is it that Final Fantasy VI’s opera scene conclusively remains gaming’s best effort in that regard?