It feels like we’ve been trapped in this room for hours, but finally the clawing, gnashing horde have slowed to a crawl, their ploughing force dripping away into a few stragglers stumbling through the window and up the stairs. It’s only a temporary reprieve, so we need to keep moving. I take the initiative and head through the window, fighting to see through my monochrome vision. My feet have scarcely touched the ground when I hear the screeching. Distant now, but not for long. Our only option is to push forward to the safehouse on the other side of the bridge, a disused train carriage.

I’m limping, pace completely shot, but I keep going. I know as soon as I turn to sneak a glance behind, they’ll be upon me. One of my compatriots is keeping up, the other two seem to have slipped into the horde, vanishing underneath a sea of teeth and claws. We are close to the safehouse and that solid, red door now, but first we need to make a choice. Should we save our friends at great risk to our own lives or abandon them and go on? The decision is made for me when my final teammate hurls a molotov cocktail into the horde, burning the creatures alongside our friends. They disappear into the crackling fires, and we sprint across the bridge, before slamming the saferoom door shut. If that molotov hadn’t halted the ravenous crowd hot on our tail, it’s likely we’d be just as dead as our two compadres.

A burst of music slashes through the thick atmosphere. Our stats flash up, congratulating us for making it this far. And then we find ourselves back in that saferoom, together with our two fallen comrades. We’d seen them burn up mere moments ago, but now they’re here with more health than either of us, more ready and prepared than we could ever be.

Moments like these give a strange feeling of disconnect in Left 4 Dead, Valve’s co-operative zombie shooter.  It’s a game focused on survival, wherein your only real objective is to push from safehouse to safehouse without dying too much in the process. Exploring levels rewards you with weapons and items, but those tools only carry over if the player in question makes it to the safe zone. With the game’s dynamic director system, item locations and even entire pathways can shift throughout the game. There’s rarely a complete strategy to be built, sessions focus on improvisation and a dedication to get at least one of you through that door.

You’d think that such a simple objective would lead to a sense of merciless abandonment, as teammates who can’t keep up are left to the grinder. And yet, risks are taken each and every chapter. Healing items are handed over. Teammates are revived in the middle of zombie hordes when it would be far more practical to leave them. There’s only so much good an extra gun can do. Many of these risks are taken out of sheer selflessness to help other players in dire circumstances. I have a particularly bad habit of handing over medkits even while others still carry theirs. Perhaps I’m boldly overestimating my abilities, but I always feel my fellows in misery will need that health more than I ever will.

It creates an interesting dynamic, who survives and who does not becomes a question of your own desire to see them cross that finish line. Those who perish bounce back into the safehouse with enough health to sustain another long haul, so the sensible decision would always be to leave the dying behind. And yet, in my experience, nobody does. When people fall, even knowing they’ll come back hobbling and in even further need of aid, there’s always a valiant attempt to pick them right back up. The design philosophy encourages abandonment and the preservation of resources, and yet players are willing to throw their bullets, medkits and even lives away in the hope of pulling another to safety. 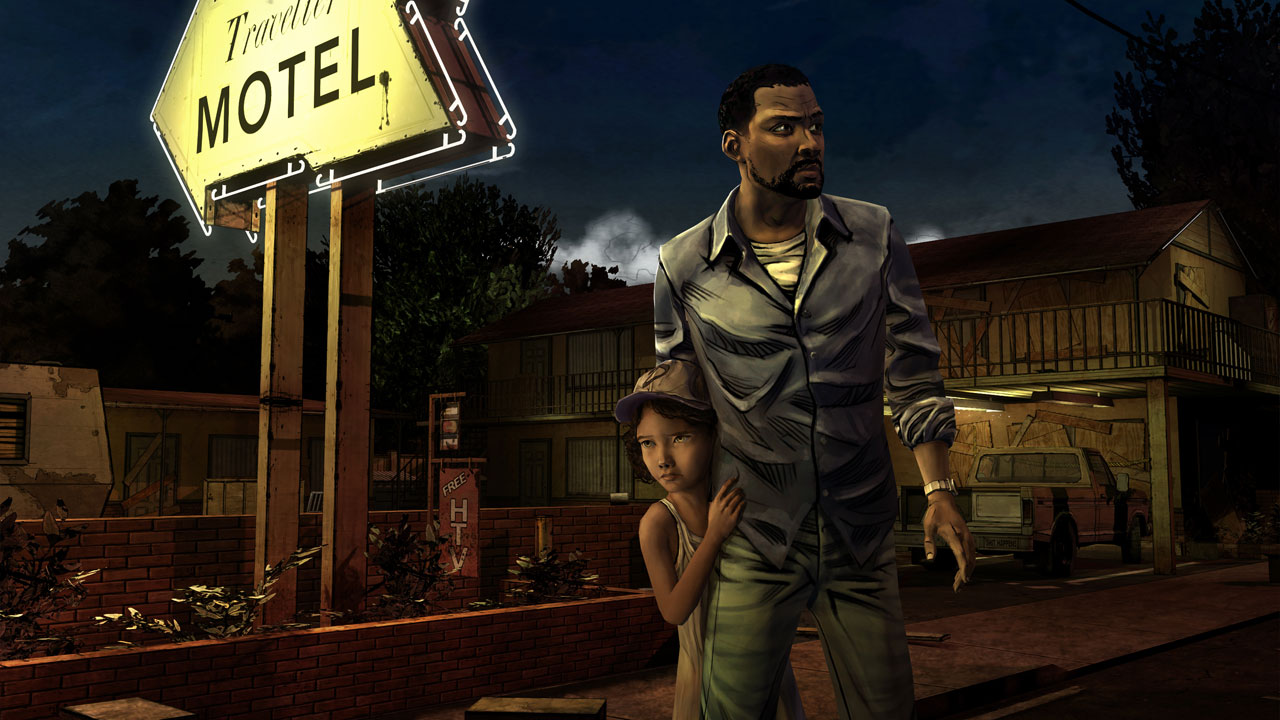 At first glance, Telltale’s recently concluded The Walking Dead, an adaptation of Robert Kirkman’s comic series, seems to be the complete opposite of Left 4 Dead’s explosive, fast-paced excitement. Built on the foundations of Telltale’s adventure game roots combined with Quantic Dream’s cinematic approach, The Walking Dead adds more explicit choice with telegraphed moral quandaries based around the game’s richly written cast. There’s even the option to have the game vaguely tell you how characters are reacting to your actions and responses. While the binary mechanics are masked by the game’s great presentation, it’s clear what choices are to be made.

Left 4 Dead and The Walking Dead appear, on the surface, to be completely different creatures, vastly different takes on the zombie apocalypse. But there’s a very crucial moral throughline that connects the games – survival versus altruism. At some point in both games, the sensible thing was to walk away, or to kill for my own survival. And yet, those options never felt right. So many choices in The Walking Dead were made to prolong the life of characters I might not even have liked or trusted. When teammates in Left 4 Dead lie with their health being clawed away by the horde, there is always a need to break through and see them survive.

With their respective zombie epics Telltale and Valve produced more than simply a vision of the creatures. They created worlds, places that feel as though the civilization we knew had ended and this is all we have left. From the dark roads and claustrophobic forests of Left 4 Dead to the barren and hopeless landscapes in The Walking Dead, the zombie apocalypse never felt more desperate. These aren’t idyllic fantasy lands, where the true weapon is your extensive knowledge of Romero films. These worlds are bitter and hateful. Death and hurt can come from any angle. Perhaps if these worlds weren’t so hostile and devoid of life and warmth, we’d be able to stomach the trip alone. But we can’t – there’s a desire for companionship. However fleeting it might be, and however broken our friends are, it’s comforting to know there’s someone else there beside you at the end of the world.

I remember the way that molotov sailed through the air and smothered two good people more than any time I picked them up. There was no way to save them, and yet a layer of guilt still remained. The game had pushed us, nodded and told us that to just cross that bridge and get inside that saferoom would fix everything. And of course, the two we had just seen burn up, sprung to life before us as though nothing had happened. In the end, it was a necessary sacrifice. But it felt so much like a loss. There was a slightly bitter knowledge that even though they stood beside us now, we’d let them turn to ash solely to survive a little longer. Later, as I played through The Walking Dead, I began to realize how small, fragile and precious a single life is. Character’s I put emotion and trust into bled away, no matter how much I tried to save them. Instead of giving up and condemning them all to death, I kept trying. I kept hoping I could do better. If I could save one life and keep it safe, it would all be worth it.

It’s this very idea that forces us to run back and pick up our teammates in Left 4 Dead, even when we hear the shriek of the horde coming for us. There’s so little good left in this world, and we’ll be damned if we let it take the final remnants of life from us. In the fight for survival, what’s the point of carrying on alone when everything meaningful and real is gone? Nobody said keeping everybody alive would be easy, but when the last cities fall and the dead roam the planet, every small, fragile and precious life becomes a beacon of hope.