My brother got Lego Star Wars as a gift on his eighth birthday. As he tore off the wrapping paper, a goofy grin stretching across his face, I rolled my eyes in disgust.

A few months prior, as I was rounding the corner to thirteen, I’d just convinced my parents to relax the household ban on Teen-rated games, which they had said were too violent for the house or my impressionable young brain. Since I knew I’d never be able to convince them otherwise, I made a case for it on the basis of free choice: I’m a teenager now, and should be allowed to play games suited for my age. After a few weeks of exaggerated hand-wringing, we had a family meeting around the kitchen table where they agreed to let me make my own decision. “We know you’ll make the right choice,” my mom said, pausing to emphasize that there were right and wrong answers to this question. Of course I knew what they wanted me to do, but I was too excited to care.

Shortly after this family meeting, I got my first Teen-rated game as a Christmas gift: the original Star Wars: Battlefront on PC. While my mom was hesitant and my dad was indignant, I was ecstatic. It felt like I had moved from the shallow end of the swimming pool to a sea of infinite freedom, even if my parents were watching grudgingly from the shore. After months of anticipation and with shaking hands, I tore open the wrapping paper, then the box, and watched with butterflies in my stomach as the installation bar crept towards 100% and screenshots flashed above. That night, as I blasted my way through the forest of Endor and defended the cloning facilities at Kamino, I felt practically weightless with the unique brand of excitement reserved exclusively for kids on Christmas morning. 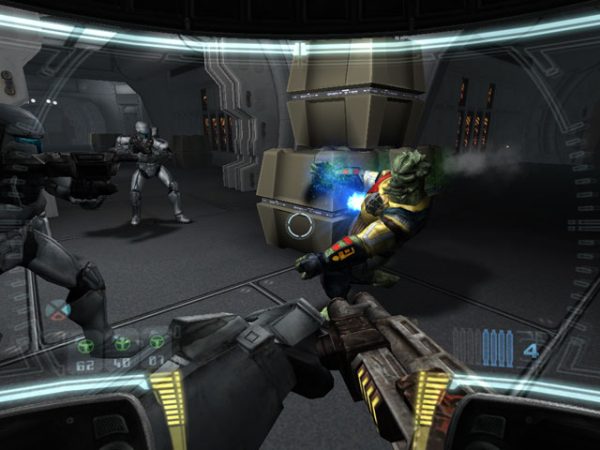 Trenton, my brother, sat next to the computer and watched me play it through most of Christmas day. This wasn’t atypical: by virtue of being the oldest, I was usually the one at the controls while Trenton a devoted spectator, occasionally chiming in with ideas or encouragement. However, this time was different; Battlefront was the first game I had owned that he wasn’t allowed to play. On paper he should have been spiteful for being excluded, but since he generally viewed games as a spectator sport, it felt like we had moved forward together into the world of ostensibly limitless possibility provided by Star Wars shooters.

It didn’t take long for this illusion to shatter. As I gradually exhausted everything Battlefront had to offer, the gameplay grew repetitive and the excitement I’d once felt on Christmas morning began to sour. It was also increasingly apparent that Halo 2, which was released a few weeks after Battlefront, was the current favorite among friends and classmates—and since it was rated Mature, I wasn’t allowed to play it. Compared to the otherworldly amusements of the Halo franchise, Star Wars felt third-rate and childish, and Battlefront felt like a persistent reminder of all the experiences I was missing.

Then, a miracle. One day while browsing the website for LucasArts, the developer behind most Star Wars games pre-Disney acquisition, I noticed screenshots for a new Star Wars game called Republic Commando. Everything about it—Shotguns! Blood and guts! First-person perspectives!—promised a Halo-like experience in a blissfully Teen-rated Star Wars package. It seemed almost too good to be true. I memorized everything about the pre-release details, from the summaries to the trailer to the screenshots. I drove my family and friends crazy talking about it. I daydreamed about it during my middle school English class. I couldn’t wait. 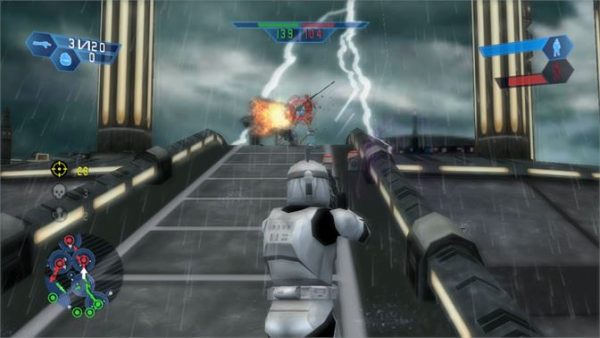 I pre-ordered the game at my local Hastings and anxiously counted down the days until release. After staring at the box art online for months, picking it off the store shelves and holding it in my hands felt surreal. I clutched it tightly to my chest as Trenton and I ran home. While the game loaded, my blood pulsed with anticipation. Like Battlefront, Trenton may not have been allowed to play the game, but he was every bit as excited about it as I was. As I worked my way through the worlds of Republic Commando, he watched me play it with religious devotion.

Then came Lego Star Wars, which was released just a few weeks after Republic Commando. Trenton, who at the time wasn’t much of a video game or a Star Wars fan, asked my parents if they would buy it as a gift for his birthday. At the time, neither of us knew much about it other than that it looked like a picture book retelling of the first three Star Wars movies with Lego blocks instead of people. That it was designed for kids and lacked the gory, gritty realism of Republic Commando was obvious; how could a game about Legos be anywhere near as entertaining as a full-fledged first-person shooter? The way I saw it, Lego Star Wars was his consolation prize for not being able to play Teen-rated games, so I encouraged him to get it.

Shortly after it was released but before his birthday, Trenton spent the weekend at my uncle’s house, which was the cool place to hang out when we were kids. He had a flat screen TV, an Xbox, and a huge library of games, and it somehow felt like we stepped out from under my parents’ sphere of influence while we were there even though the same rules applied. In preparation for the weekend, my uncle had purchased Lego Star Wars at a Gamestop so he and my brother would have something to play together. 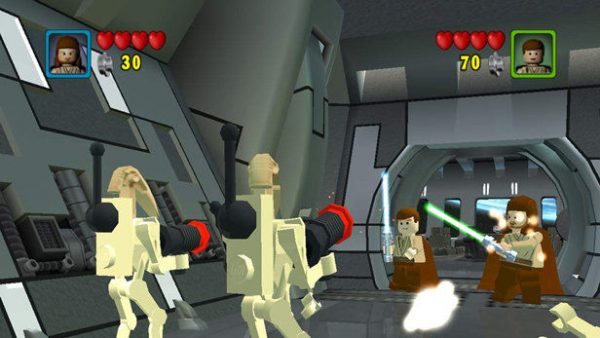 They had a blast, and the impact on Trenton was palpable. When my mom and I met up with my uncle to pick him up later that weekend, Trenton jumped out of the car beaming and yelled, “Mom! That game is so much fun!” His hands flapped at his side as he jumped up and down euphorically. Somehow, Trenton looked different—more confident, even, as if finding a game that could be just his gave him greater awareness of his own potential. As I watched him bouncing up and down in the parking lot, my stomach twisted hopelessly into knots at the realization that if he had found his own game, he would no longer need me.

Over the next few weeks, I did my best to show off some of the Teen-rated features my games had that couldn’t exist in the world of Lego Star Wars. “See how the bug guts splatter onto the screen?” I’d say. “Isn’t shooting at people so much more satisfying than shooting at Legos?” It was a desperate bid to maintain our connection through games, but Trenton would just smile and nod absentmindedly. In his head, he was already playing Lego Star Wars without me.

When his birthday finally rolled around, he tore the wrapping paper off the game and ran to install it on the family computer. I sighed and made a show of disinterest, but Trenton was already fully absorbed into the game, unconcerned with anything other but the digital Legos on the screen. When I heard his ecstatic laughter from the living room, I knew I had lost.

Eventually, curiosity got the better of me and I went to watch him play. As I stood behind his chair and watched him break, build, and shoot his way through The Phantom Menace, I was devastated to find the game looked every bit as good as he had told me. It was going to keep him busy for a long time. I felt my eyes growing hot as the new reality began to set in. As I was turning to leave, he turned around and looked at me with a big, dumb grin. “Want to play? There’s two-player.” 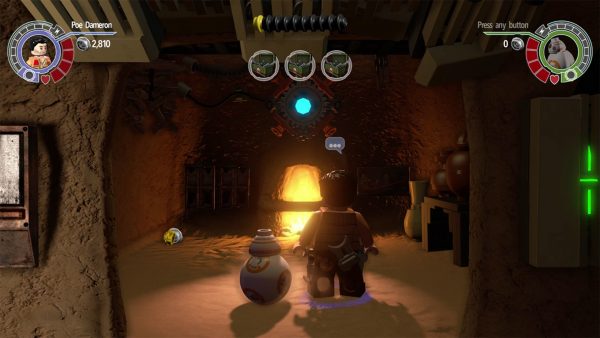 Last weekend, Trenton spent the night at my place. When he comes to stay we normally go out to eat or see a movie, but this time we just ordered takeout and talked. We talked about his classes, his work, his girlfriend—and we played Lego Star Wars, first the original game for old times’ sake, then The Force Awakens when the resolution and clunky camera angles were giving us both a headache.

When I was younger, I looked to visual media as a way to prove to myself and others that I wasn’t a kid anymore, and that I wasn’t bound by anyone’s rules—even though I was. Somewhere in the back of my brain, I thought sneaking into R-rated movies and playing blood-soaked video games would help move me forward into adulthood. Of course, my interest was largely in the mechanics: bits and pieces of gameplay that would have been off-limits in games with lower age restrictions. The older I get, though, the more I realize that the personal experiences tied to something—be it a game, movie, or anything else—are what give it power to stick around for years and years.

I spent about 10 years away from video games before buying a PlayStation 4 last year. After spending so much time on the outside, it was interesting to see which of the games I played in my past lives are still around today, either through remasters or sequels. Seeing Lego Star Wars on that list didn’t come as a surprise. Even after 15 years, it’s not hard to see why people still want to play it together.

Porter Simmons is a writer and e-commerce director from Salt Lake City. You can find him on his website.