Hotline Miami 2 is a bad game.

There’s perfectly nothing controversial about that statement: it wants to be a bad game, at least as far as its desire to be deliberately frustrating instead of entertaining is concerned. Wrong Number picks up where the first game left off in terms of difficulty and revolves around such delightful activities as getting stuck on objects, trying to figure out whether lines drawn across its top-down environments depict solid objects or decoration, and being shot from off screen. Don’t worry though, it’s all part of the plan. The game is showing me what a monster I am because of all the fun I’m not having hurting others.

The problem with intentionally bad design is that it becomes a shield to deflect any kind of criticism. It’s supposed to be like this! You just don’t get it! The merest hint that a game is using certain tropes or mechanics ironically, despite itself, is enough to get a lot of players and critics to accept any design decision as sacred, regardless of whether or not it actually benefits the supposed intention of the work. Hotline Miami’s lackluster condemnation of videogame violence is a prime example of this.

Hotline Miami’s indictment of its playerbase banks on the assumption that people lose themselves in a combat system that strongly disincentivizes actually giving in to driving beat of the game’s eclectically electronic soundtrack. Rushing in, swinging wildly and messing people up before they even have a chance to respond may have been an option for the first thirty minutes of the first game, but the increasing prevalence of guns quickly destroyed any semblance of flow in Dennaton’s first trip to Florida, and Wrong Number continues the questionable tradition of making you inch forwards, wait for openings and lure enemies over. 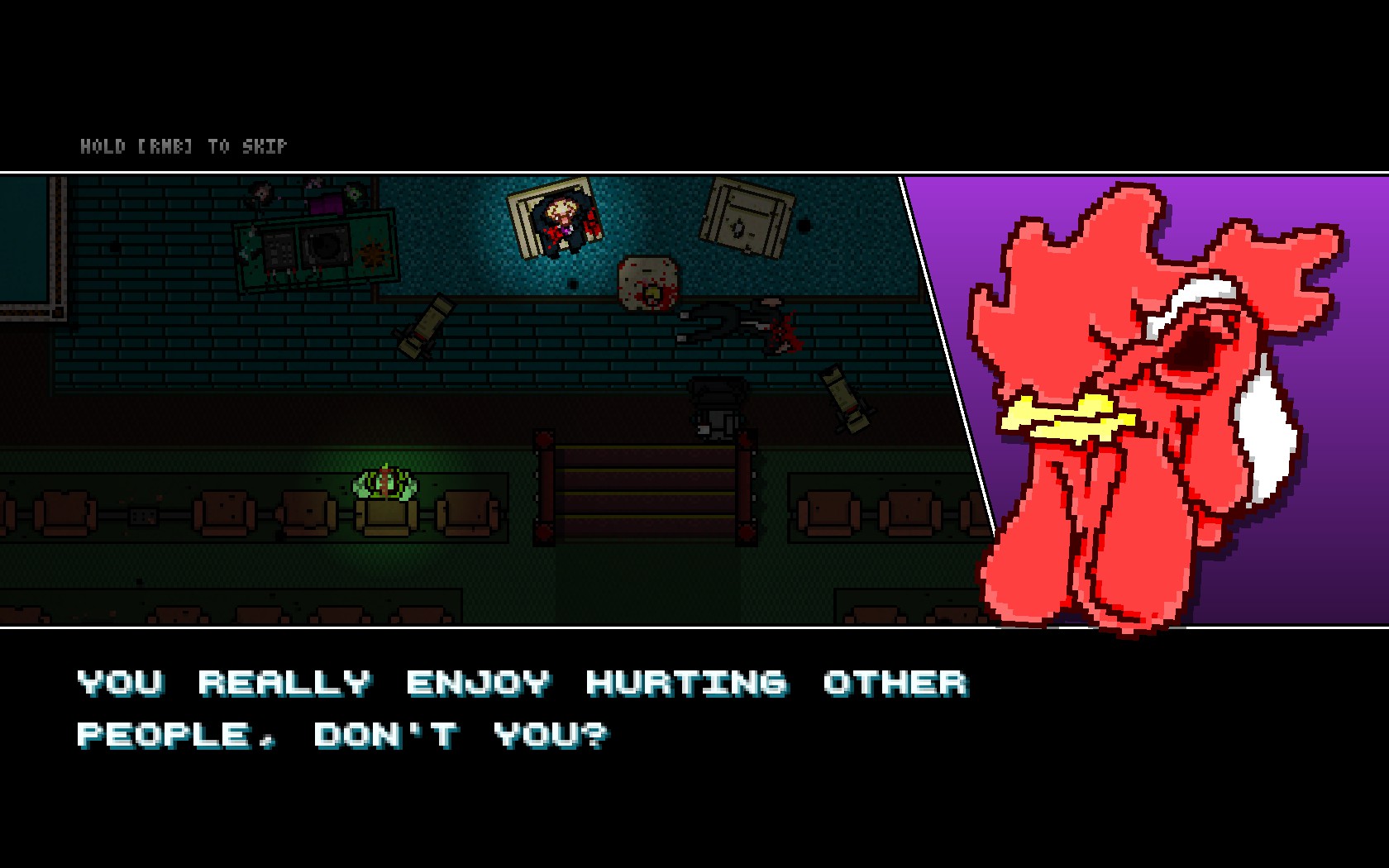 While the forcedly slow pace of Wrong Number doesn’t make my actions in the game any more noble or any less bloody, it does put them out of line with a narrative and aesthetics that try to frame my killing as the result of frenzied bloodlust rather than the slow deliberation actually required to complete a level in this damnable game. While Hotline Miami’s story suggests that I am the aggressor, bringing violence to these environments, it is much more mechanically sound to let enemies come to me, and the few shots they fire in my direction when I draw their attention somewhat ruin the illusion that this bloodbath happens at my decision.

Why make the game about memorizing paths through frustrating shootouts then? Why the focus on open environments in which I am much more likely to be overwhelmed than to do any overwhelming? Because this brainless beast seems to think that being difficult to read and play makes it interesting, insightful or profound. Hotline Miami 2 is the peak of obfuscation and frustration masquerading as depth, the epitome of ironic violence and ironic sexism used in place of genuine criticism as if reproducing these issues were the same as reflecting on them. These two vectors convene in the game’s revolting rape scene, which puts sexual assault in service of a snuff film plot point that, like so many parts of the game, never goes anywhere.

Hotline Miami’s attempts at ambiguity serve a practical purpose for the game, however, by allowing it to mock its audience without having to fear falling from favor. Among the various characters you control in Wrong Number is a group of copycat killers inspired either directly by the events of the first game or a series of murders along the same vein. A group of directionless potheads who see violence as a fun way to pass the time? Pretty blunt as far as stand-ins for your own audience go, but then the game never suffered from a lack of blunt remarks or blunt objects. 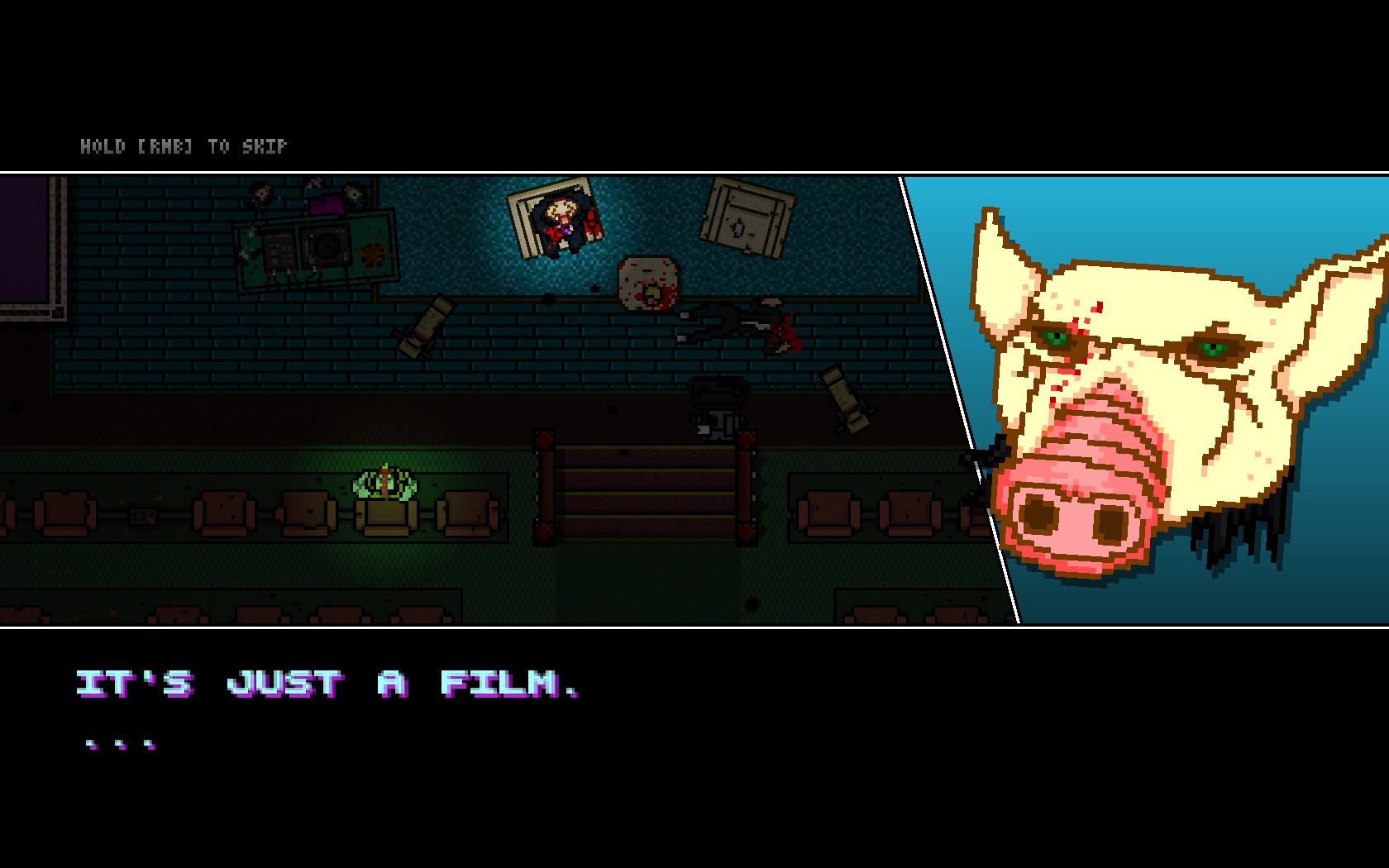 The problem is that this message is buried under ridiculous plot points about nuclear war and struggling writers, and obscured by the billowing dust clouds of the game’s internal conflict of trying to at once make you enjoy and loathe the horrible actions you perform in its course. The game’s obsession with obfuscation allows Hotline Miami to score points with the artsy crowd even while enjoying rave reviews and unironic adoration from players. Such unconcerned consumption is shrugged off as the result of many individual failings, rather than an issue with the critique itself. Some people just don’t get it. Of course they don’t. What a clever game, so artistic, so delightfully cryptic, so open to interpretation. Really makes you think, doesn’t it?

I don’t doubt that Wrong Number was designed very carefully to look and feel the way it does. I just also happen to think that Dennaton’s vision adds up to a cowardly, contemptible game that tries to rake in cash and credibility peddling the exact same shit it claims to interrogate, while tickling our elitism to get us to defend its vapid nihilism and badly written dialogue. It’s very interested in condemning its audience, but forgets to ever look at its own responsibility in this cycle. One game is about shocking your audience. Two games are about pandering to them, one way or another. With blood or with botched barbs. Wrong Number has plenty of both.

The big lie of the first Hotline Miami was that there was ever any insightful commentary about violence buried under its psychedelic killing sprees, and the sequel only draws more attention to the repugnant mindlessness of the entire affair, by adding needless backstory and filling interesting blanks with asinine answers. Better to remain silent and be thought a fool than to speak out and remove all doubt.