A hunched back, elbows planted on each knee, and a tight grip around a dual analog controller. It’s become the universal gaming stance, and has been my posture this past week playing Titanfall. Twenty hours logged. Nothing outlandish, but having just gotten off my stint with Call of Duty: Ghosts, it’s a reminder of how easily these kinds of games can grab one’s attention. Like waiting for a football to fly out of the television, I lean in, my face illuminated by the glowing numbers of the same reward model that was introduced by Activision in 2007. Its effects are written in the body language: A lowered head with eyes darting, fingers twitching, and a headset blaring. It’s the kind of submission that the Modern Warfare series demands, and Titanfall is but the latest installment. If not in company moniker then at least in spirit. Primed for passivity, profit, and player control, if the model has lost any acclaim with Ghosts, then a bipedal tank falling from the sky is all it would seem to take to, yet again, reinvigorate the addiction.

That’s a cheapshot. Titanfall is, without a doubt, its own animal. At least on its topmost layer. In its match flow, player movement, and weapon play, it brings new kinds of speed, power, and verticality to the FPS landscape. It’s as comparable to Call of Duty as it is to Unreal Tournament, Tribes, or Mech Assault. The most convincing argument to make for the Titanfall to Call of Duty comparison is perhaps the presence of iron sights, similar menu layouts, and the uncanny likeness to Modern Warfare 3’s graphics engine. Its games modes are more traditional than copycat, and elements like wall running, jump jets, and cloaking devices are but a few quick examples of what make Titanfall unique. The heads behind Respawn Entertainment being former Infinity Ward developers, however, does coincide with an unmistakable familiarity.

It’s the gradual realization that Titanfall’s enjoyment, like its fragfest cousins, doesn’t lie primarily within all of its new toys, ideas, and explosive action. Of course, it may at first, as it certainly did for me. Watching a metal beast barrel through the atmosphere and slam into the ground, it felt like a new kind of fun. “Next-gen,” even. A metal hand extended and welcomed me into a cockpit of romantic science fiction, and in that moment I was giddy with the implied power. The computerized voice, the dash jets, the groaning joints and crushing metal, all topped with a thrilling ejection animation. I was a pilot. This was my suit. Finally, some real mech action to heal the disappointment that was Pacific Rim. A game I could get behind.

How incredibly fast that excitement faded when it becomes clear that everyone has a titan – my titan. That everyone has that sweet 40mm cannon. That the maps are designed to shepherd these war machines into pens, clustered in corridors and doomed to spam rockets and melee attacks. Now, I just take the haymaker perk and slam into other players, abandoning my prized possession in hopes its self-destruction scores me a kill. Titans quickly began to feel like glorified gun turrets and metal hogs with limited use. They became an empty routine, and yet I still kept climbing into them, again and again. And it’s for the simple truth that underneath their metal carapace, the Call of Duty skeleton is still the one running the show, the addictive host I’ve always been loyal to. The Titans only remain attractive for the plethora of unlockable challenges they represent. Stomp on 50 pilots? Accrue 250 kills with the chain gun? Sounds fun to me. It’s been fun since Modern Warfare. 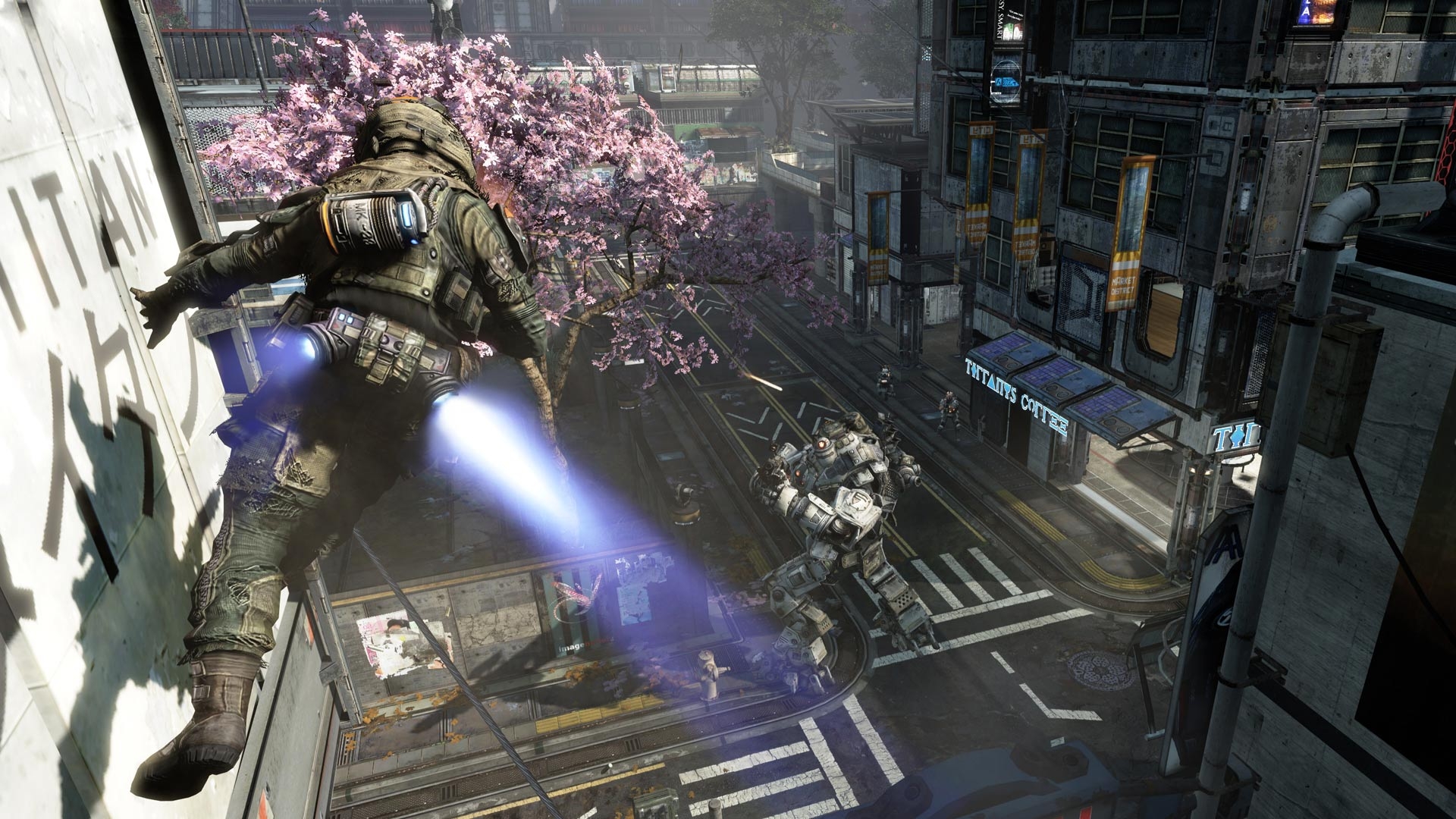 The essence of these games has always been the carrot-on-the-stick that dangles in front of players. First it takes the form of unlocking weapons and perks, then skins and ranks, and finally the pursuit of performance challenges and of achievements or trophies. All games appear to operate upon similar triggers and advancement, and on paper it would seem Modern Warfare’s model is no different from other reward based shooters. Valve’s Counter-Strike awarded cash per kill, offering better equipment selections from round to round. DICE’s Battlefield 2 had the hugely popular weapon unlock system, and Bungie’s Halo 2 incorporated ladder ranking, player earned decals, and matchmaking. All successful goal oriented models, all similar enough to what’s seen today with Titanfall, and yet all commercially dwarfed by this more refined model.

What separates these examples from Infinity Ward’s, Treyarch’s, and now Respawn Entertainment’s shooters, is how these ideas of reward have been taken and simply increased in frequency. To the point of inevitability. Stress relief is arguably one of the goals of playing games, but the aforementioned shooters can as well exacerbate it. After all, there is always the possibility of having a bad night in competitive multiplayer. Striking out when going up to bat, so to speak. Old reward systems are too demanding, too elongated to feel immediate progress, and entirely dependent on individual performance. Modern Warfare brought something revolutionary to the table. It rewards indiscriminately. Winning is a guarantee, and somehow the illusion of challenge is maintained, fostering the important feelings of individual player dominance. I don’t have to go to bed angry anymore. For however long I’m playing, I’m accomplishing things. I’m producing results.

Most encapsulating of this philosophy, and now widely mimicked elsewhere, is the presence of experience points and, more significantly, how they are awarded – immediately. At the very moment of the kill, a golden text of “+10XP” floating aside the corpse of a bullet-riddled opponent. What may have originally sounded like filling the screen with frivolous information is now considered a gift-wrapped reward, perhaps more satisfying then the play itself. A visual confirmation of progress, an injection of pride, and one that makes sure to tack on points for not only headshots, but for seemingly anything. The system rewards for the irrelevant, any excuse to make the player a winner. If an inept gamer in Modern Warfare throws a grenade off target and destroys a nearby automobile instead, they’d be surprised to find the award of “Vandalism!” and a bonus of 750XP flash across their screen. The concept is identical in Titanfall. I could be rocking a 1:10 kill/death ratio, feeling terrible about it, and then suddenly get smacked with a 10,000 XP reward for running a set amount of steps. For being cloaked a certain length of time. For sitting my ass down and hitting the 10 hours played mark. No more off nights, no more reasons to put the controller down. I’ll get a trophy.

I’ll be the first to admit that this is why I play these games. They’re satiating. I used to play more demanding titles like Starcraft and Counter-Strike, but I’ve found that one 30 minute match of these will mentally destroy me for a day. Win or lose, they’re simply too stressful. Titanfall is different. It feigns intensity without any kind of actual pressure. Three hours feels like nothing. I can hardly remember what I did. The spin-around headshots, the flag captures, the Titan knockouts. The emotions are so fleeting. And even if a whole night’s play passed by me in blurred memory, I’m happy in the moment and convinced I’ll be happy in the next. I always want to play more Titanfall, and I will play until all unlocks and challenges are exhausted, until the DLC is depleted, and right before I toss it aside, a well-oiled release schedule will have a sequel already lined up for me. 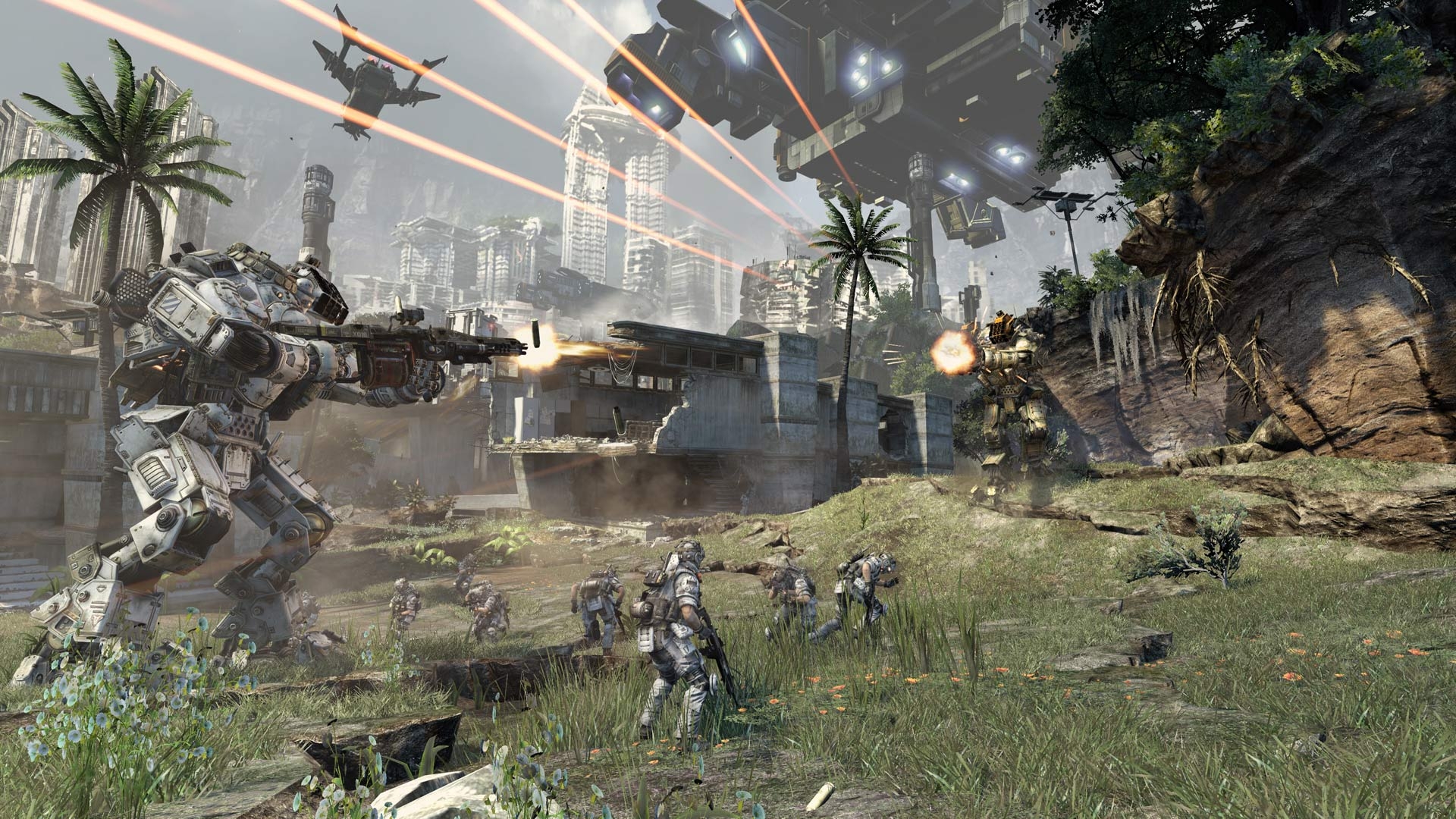 This is, however, finally starting to eat away at me. It’s ruining my enjoyment of the hobby in general. While I do hate to take a stand against what is, in fairness, great design, I’ve almost suddenly come to despise it. The empty memories it serves me. The wasted time. That I’m doing what’s equivalent to squeezing a foam stress ball. A Titan crashing into a battlefield hasn’t reinvigorated my addiction to Activision’s model of self-serving entertainment. It’s become a wakeup call. A reminder that multiplayer gaming can be an indulgence, a kind of high, and that games like Modern Warfare and Titanfall are as brilliant as they are abusable. A form of blackout gaming.

I’ve had my fill of these products, these games that always feature a silhouetted soldier on their covers. Masked in gear or in shadows, faceless slates for the individual to project a scorecard onto, I’m done with the idea. Everyone will be that legendary fighter, it’s all but guaranteed. But on a battlefield where losing is impossible, I can’t help but feel like I’m part of a unanimous surrender. That the very definition of victory is warped. That it’s just a matter of reloading the next clip, pulling the pin off reality, and tossing it to the wind. Who knows, perhaps it will hit a car.