Out There, Cosmochoria, The Binding of Isaac: Rebirth, Sunless Sea, and Noir Syndrome take us into week two of listing games.

Space is fantastic! It is really, really amazing. The great unknown is bursting with infinite wonder and a starry sky never fails to delight. Yet space is at the same time really, really terrifying, and I would not wish it upon my worst enemies. Well, maybe a couple. Depends on how I’m feeling at the time. You do not belong in space. It doesn’t want you there. It doesn’t care in the slightest if you do get there. It will simply kill you in the blink of an eye and continue existing, and not caring.

Out There understands this. It manages to strike a fine balance between the pull of discovery and the reality of terrifying isolation and existential dread. Any action could be your last. I want to say Out There is an exploration game, as you travel the galaxy deciphering alien languages and gathering resources. Although I always get consumed by the abyss before I get very far. So it’s a survival game, despite my evidence of the contrary. It is a difficult game, but the difficulty arises when you don’t pay attention. When you decide to do something that, in hindsight, was incredibly silly.

Out There is such a wondeful little game in its look and feel, that it is very much worth the risk to launch another rocket and to get lost amongst the unknowable cosmos.

Corey Milne loves writing about games because he thinks they could be really intelligent, and be used to cross cultural barriers, if they weren’t so bloody stupid a lot of the time. He very much enjoys being Irish and currently lives in Scotland, because he’s kind of stuck there at the moment. 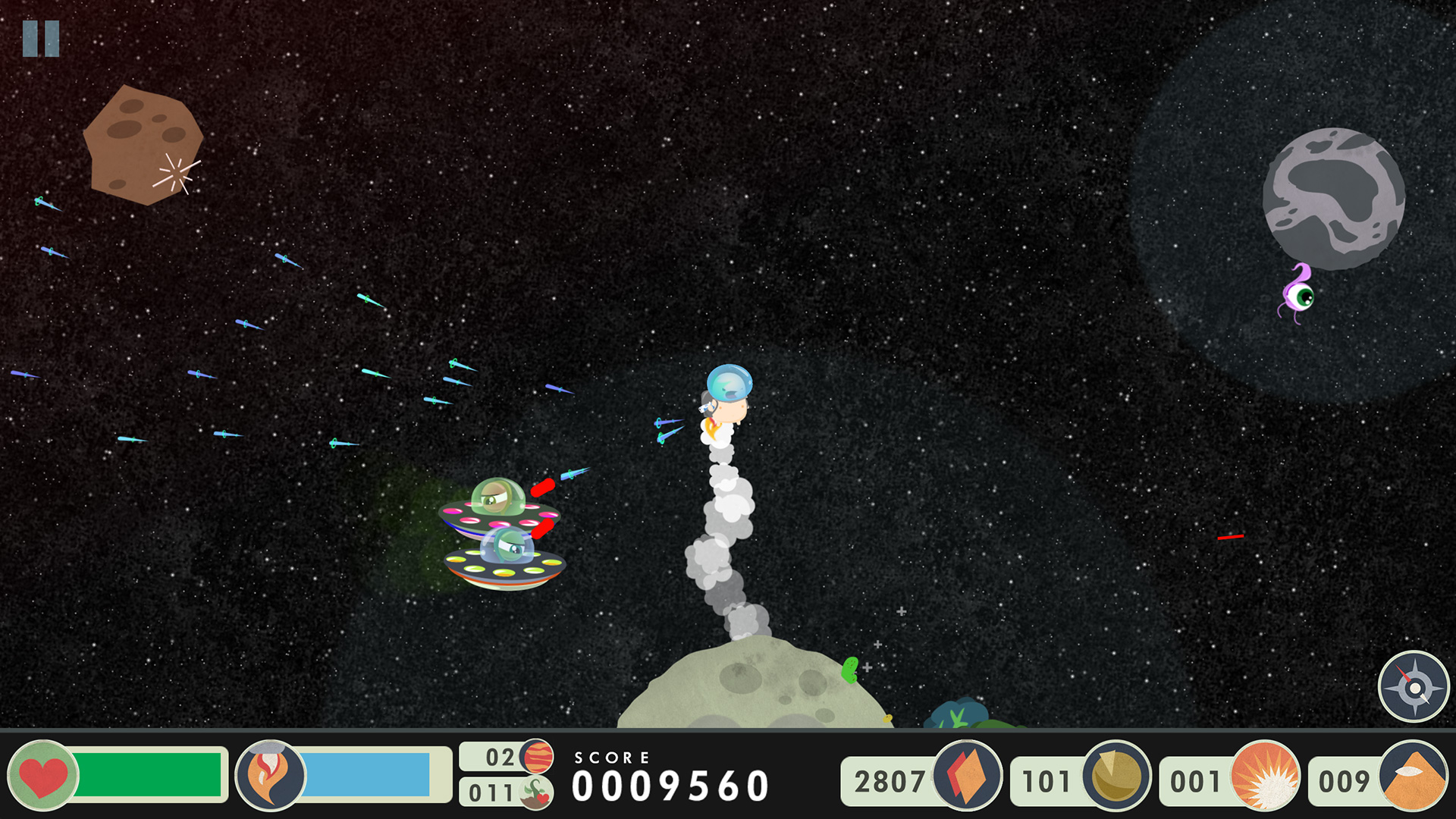 I’ve been thinking about Cosmochoria nonstop since the last time I sat down with it for I-won’t-admit-how-long. It’s a roguelike with a 90s inspired pixelated aesthetic and a gravity gimmick. It’s exactly the sort of thing I ought to be above. But I can’t stop thinking about it. Maybe it’s the innocent looking cartoon protagonist – a naked space man with a fish bowl on his head – endearingly hopping from planet to planet. Maybe it’s the cartoonish alien designs and the sense of mystery that comes with jetting off into space, hoping for a new world. I think it runs deeper than that though.

In Cosmochoria, the player must traverse a lifeless universe and plant seeds of alien plants onto one planet after the next. Aliens, robots and space dragons will try to shoot down our heroic nudist, but they’re just a distraction from the real goal: floating and creating life. Inevitably, the player will die. The universe is too big and too dangerous for them to survive it. But there’s something hopeful in the continued growth between attempts to bring Cosmochoria’s whole universe to life. After each death, the player can upgrade one of their abilities – none of them directly related to combat – and so they return to the cold, uncaring universe a bit stronger, with a bit more life to give.

The reciprocal relationship the player-character has with their environment gives me pause as well. Once enough plants have taken seed on a planet, the planet nourishes the player, refilling their health bar. But it isn’t a consumptive relationship: life simply begets life. It’s kind of sweet. It could be said that returning to this universe is so compelling because of the promise offered by grinding, but it’s an unconventional grinding, and one that’s thematically appropriate. Life in the universe is temporary, but in bringing life to it, survival for the next generation is easier and more fulfilling

The laser sword is really fun as well. 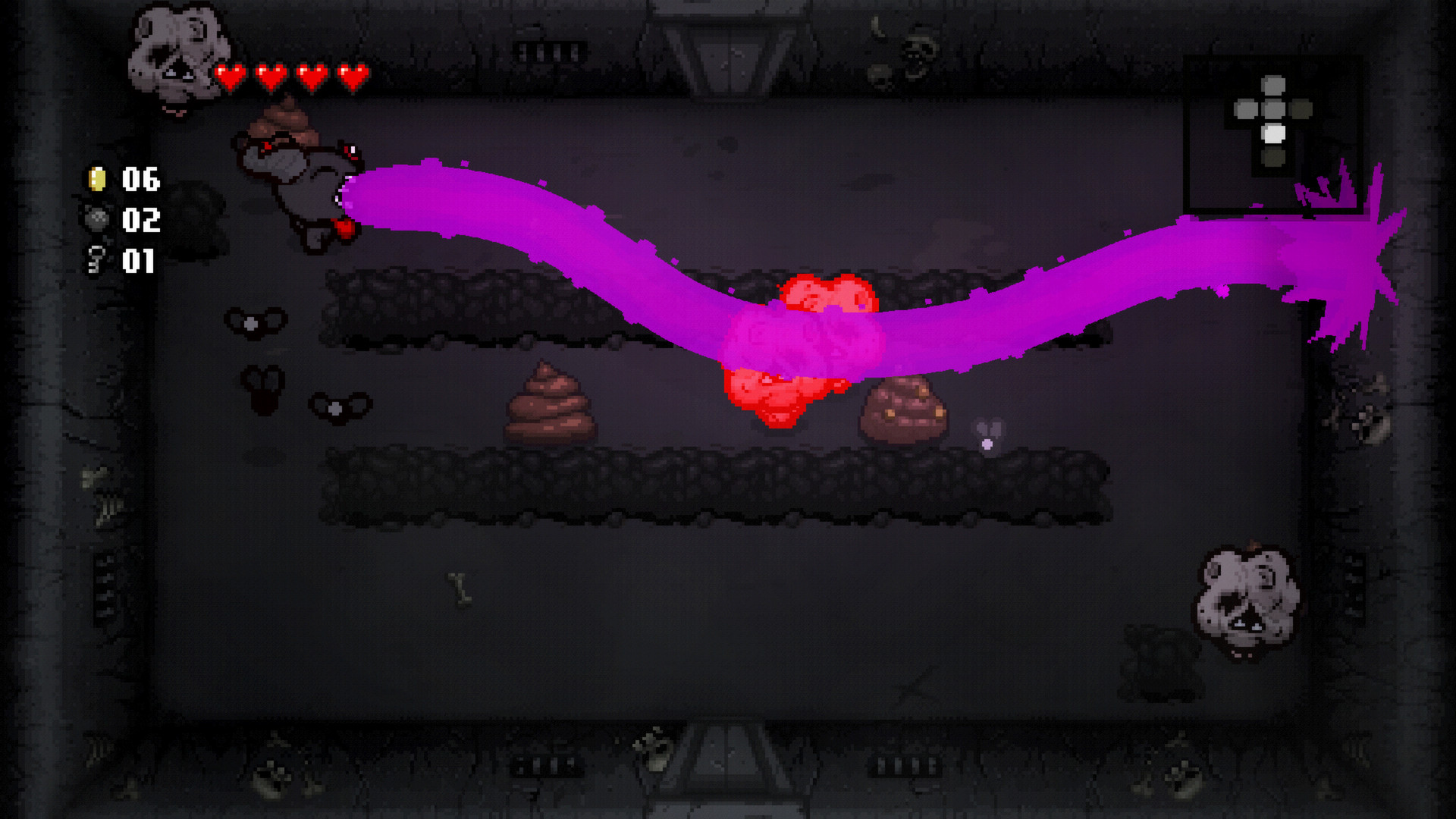 The Binding of Isaac: Rebirth

I played the original The Binding of Isaac for about 45 minutes before growing frustrated and giving up on it. I’ve also spent over 80 hours with the remake so far. Between those two? More hours than I care to admit spent playing Spelunky, a love affair that seems to have opened me up to roguelikes in general, and Rebirth specifically, which easily places as a close second in my heart.

The wonder of these games, I have come to learn, lies in their maniacal devotion to cause and effect, the way their randomly generated elements interact with each other in exciting, surprising or frustrating ways. In Spelunky, this happens around you, as enemies literally bounce off of each other, set off traps and start absurd chain reactions. In The Binding of Isaac, this happens within you, as your character is transformed by the unique cocktail of mysterious items the game cooks up for each individual run, a process that sometimes leads to debilitating weaknesses, sometimes to incredibly potent combinations and fascinating synergies. Either way, you’ll end up more than a little freaky looking.

The only way to tame this process is through the knowledge and application of the many wisdoms found in the game’s scripture, a testament to the The Binding of Isaac‘s utter lack of concern for its players. It helps those who help themselves, in a sense. This cruel indifference is also what produces the incredibly varied experiences to be found in the game. It will leave you cursing and grumbling a hundred times in a row, as you fight tooth and nail for every inch of progress with the useless tools it gave you – you could start over, too, I guess – only to enjoy tearing through bosses in seconds on the one hundred and first run, when the game suddenly decides to shower you with roses. For those moments, I will continue to endure its punishments. 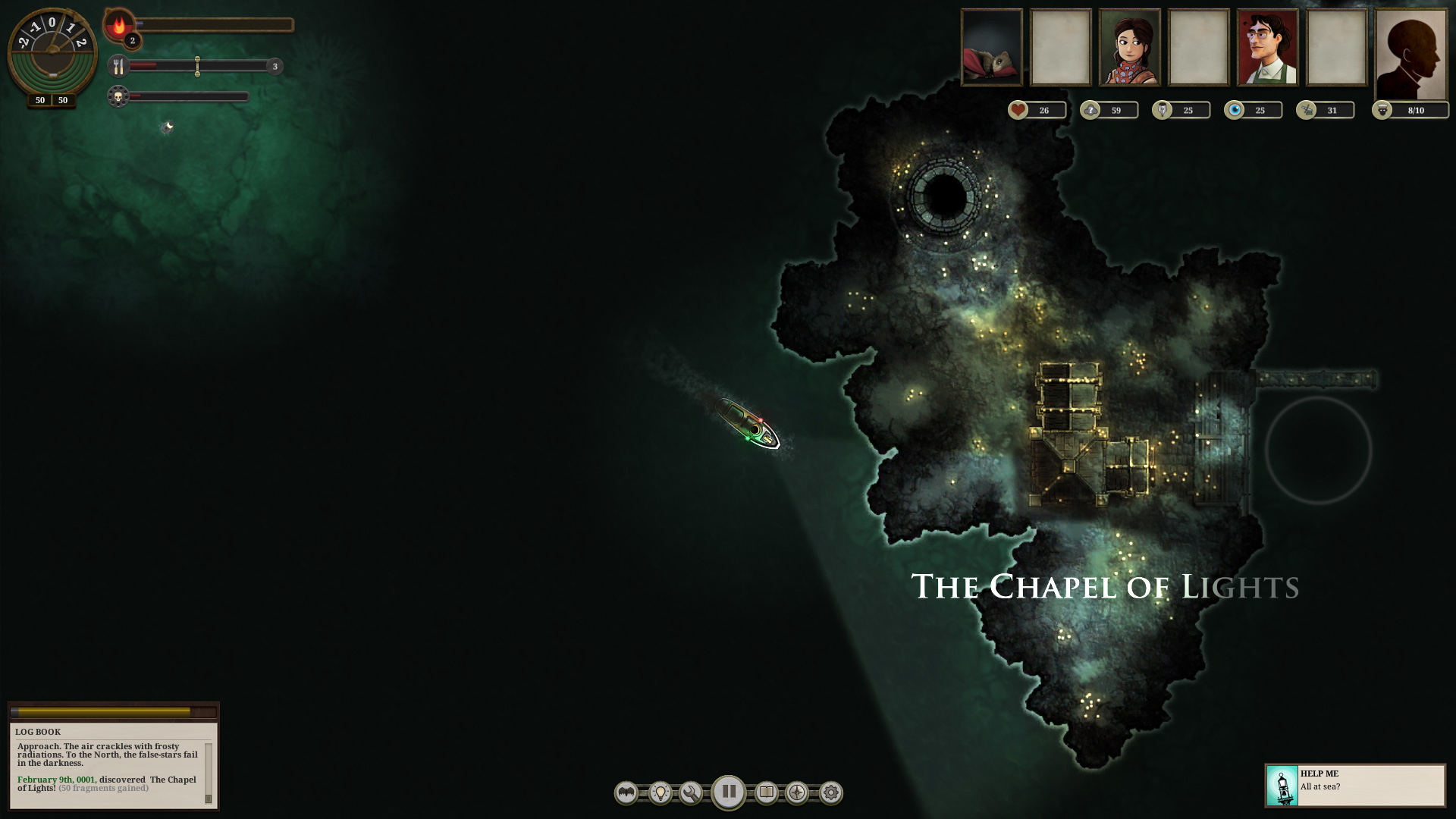 I spent several years living on a converted WWII rescue boat, a hulking, creaking beast of a thing, and one night she sprung a leak and we almost sank. The memory of that night is etched into my bones, face down in the murky water with buckets and bilge junk floating around me, pressing my hands into the immense onslaught of the leak. I remember how distinctly I realized that if we couldn’t plug it, there would be nothing to keep the water from coming in and taking us down. We would horrifyingly and unstoppably sink.

Sunless Sea feels a lot like that. The tethers of fuel, food, and sanity pull against my unslacking desire to go just a little bit farther, and there’s something terrifying and compelling about all the times I’ve simply run out of one or the other. Fuel especially, as your little vessel chugs to a stop in the darkness, and no amount of willing or wanting will get it going again. When I first started playing the game I kind of hated this, felt like there wasn’t enough resources or money to get anywhere, but the seemingly dull work of short trips and safe trade routes soon paid off in rich stories and a little store of loot that grew into bigger and better things.

I’d pour over my hard-earned map, planning my route with the charming familiarity of a lived-in world, knowing the cheap ports for fuel on daunting journeys, knowing who would trade news for mysteries, who would buy what goods, what I could use to refill my ship’s fragile needs as I chipped away at the darkness on the outskirts of my map, even while the weight of simply not making it loomed in my plans. The writing is strange and evocative and makes me take my time, and the plot unfolds in tantalizing bits that open up on each new circuit. I saw the full course of a strange relationship in the frozen north, making sure to stop there on each of my turns, and the tenuous work of moving from place to place made the story feel earned, worth it.

As the writers add new content, each place becomes more than just a stop for picking up goods or getting a bite to eat, becomes somewhere I know, with names and faces and strange customs I can dip in and out of before disembarking. The dark thrill of new ports is always warmed by the welcoming light of familiar ones, and I love limping into known harbors on one barrel of fuel, finding out what’s changed and stocking up for a new journey, getting just a little bit farther on each go, building up for that big, probably fatal push off the map. It’s a slow, thoughtful game in a sad, beautifully written and illustrated world, and one that I’m sure will only get better on its full release. 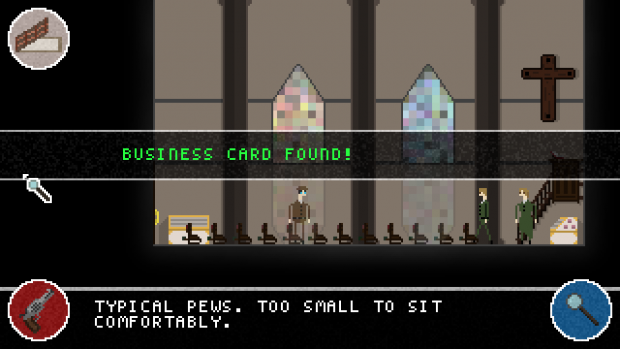 As time goes on, and things become more and more complicated in life, the simple things that just work become more rare. In an industry where games in the tens of gigabytes are becoming more common than uncommon, the simple systems and setups quickly become things of a bygone era, soon to be lost in seas of high-resolution textures, ambient occlusion, and mutlifaceted systems piggybacking on hyperthreaded processors.

As a result, it’s easy to miss the smaller, simpler titles like Noir Syndrome that manage to pack hours and hours of gameplay into what is effectively a digitized game of Clue. It’s a simple pleasure, but the modest murder mystery is something special, and the added benefit of the ranging difficulties and interplay between mechanics is something that gives players many options during their play, resulting in a very satisfying game.

Taylor Hidalgo is a writer by trade, longing always for professional work. He’s a fan of the sound of language, the sounds of games, and the sound of deadlines looming nearby. He sometimes says things on Twitter and his blog.