The more complex games become, the more nuance and variance that seems to take the forefront of games culture and criticism. Field of view sliders, real time physics models and other graphical detailing tend to take the lion’s share of the discussion, without saying much about the game itself. There are a lot of elements that interact with the player on a direct scale that have very little to do with the mechanics on which the game is built.

That isn’t to say these elements aren’t important, just that they often take a backseat to the mountains of information and setting that seem to settle somewhere between the player and the game itself. Behind the curtain of game engines, system requirements and graphical novelties is the game itself.

There is a bit of hidden magic in the most basic structures and mechanics of a game. Distilled down to their most basic, primal forms of play, something that is increasingly more foreign as games continue along the line to being more and more complex. It should not be forgotten, in all the other bits, how pleasurable it is to have games that are just mechanic. They’re simple pleasures, and in that way, they’re often simply pleasurable.

Noir Syndrome is a procedurally-generated murder mystery game that puts the player, a grizzled detective, on the fringe of a murder-filled, mob-packed, cop-saturated town. The atmosphere and setting are largely window dressing, everything about the game boils down to the mechanics. Names, affiliations, clues are all rather rote, simply existing to give the player enough context to hazard a guess at the identity of the perpetrator.

Simple, evocative music follows the detective as he rummages through warehouses, bars, police stations, ratty apartments and marketplaces looking for hidden clues. These clues are recorded in the player’s notebook, the one-stop reference guide for everything needed to suss out the identity of the murderer before it’s too late. 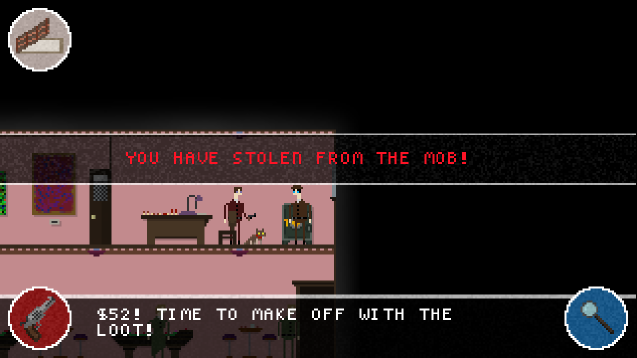 It’s hard not to draw parallels between Noir Syndrome and a board game. The assets are all fairly straightforward, male and female sprites with coat colors displaying their affiliation as civilian, cop or crook. Clues and items seem somewhat randomly generated, as though they could be tied to dice rolls without too much loss overall. In fact, everything about the game appears easy enough to transfer to cardboard and tokens. It wouldn’t be too difficult to imagine this game exclusively as a game played around a table with friends, drinks and a fair amount of laughter.

Which belies a certain success. There are several games whose best features are in the background elements. Good art, music and graphics are certainly something to be celebrated, but games which can have all those things stripped away and still be that good are something of a rare find.

Further, game mechanics have the wonderful ability to put together beautiful moments, arrange amazing coincidences and power amazing stories. The events that transpire naturally and result without developer or writer intervention are the backbone of the playful aspects of games. It is in that play that games really made their start, and the result is part of the magic that makes games what they are.

Noir Syndrome has no trouble with this. A player can run the game as intended, slipping from scene to scene, pocketing clues and taking notes, walking and guessing and assembling and arranging until everything lines up, and someone is put in cuffs. Even if it’s completely straightforward, there’s still joy to thinking and pondering and working within the framework. Alternatively, the player could amass money and wander around town, guns blazing, shooting down people indiscriminately, becoming a murderer themselves. Or they can decide to be a bank robber, fleeing the cops and bribing the mob with money to buy their way to the information they need. However scripted the NPC reactions might be to these options, they’re all options. The framework is just the setting, everything else emerges through play.

Finding that playfulness is always a breath of fresh air in a market where gaming discourse ranges from artistic merit to graphical demand. To simply engage in a game at the most simple level is something that speaks to a baser enjoyment, but is no less amazing for its result. Some games are, in that way, very simple pleasures.

Noir Syndrome, in that way, is simply pleasant.

A copy of Noir Syndrome was provided by its developer Glass Knuckle Games.