So many games have attempted satire in the past and none of them have really succeeded. For a videogame to satirize something – be it an ideology, a person or their favorite target, videogames – it has to be only tangentially recognizable to the original. A real problem when it comes to videogames satirizing videogames. Or at least that’s what I think in the wake of Jazzpunk. Everything it does is about tearing down the conventions we’ve grown accustomed to with regards to videogames. It wallows in its mad cap artificiality and says to the player, “Look, this still works. You’re still having fun.”

In concept, this could so easily have gone wrong. Throw a bunch of random enemies and strange environments together, then add hidden items, make a few “The cake is a lie” references before mixing with a heaping helping of voiceover winking nods to what is going on, possibly with an Alice in Wonderland reference thrown in, and you’re done. You can see it too. You can see that game, how terrible it would have been and how familiar it would be.

Jazzpunk is at times like that game, but is on a completely different wavelength. It’s too well constructed and considered. I feel the artist’s hand behind the digital walls, pulling the strings and creating something the likes of which I have never seen before. It wears its artificiality on its sleeve and, most importantly, it doesn’t care. It doesn’t care about immersion. That would get in the way of lampooning the absurdist nature of videogames and the world of spycraft.

“Absurdist” is the absolute right word to use here. The world of Jazzpunk is immutable. Nothing in it can be changed or destroyed. Things will happen as they are ordained to happen. All we can do is react to what the world throws at us and around us in the hyper-complicated bizarre scenario, whose every minute detail is inscrutable and unknowable. To function we simply follow the orders we are given. Go where we are told to go, do as we are told to do by powers that may or may not have any more clue as to what is going on than we do. And in our realization of that inevitability, we take the only sound course of action. We laugh. 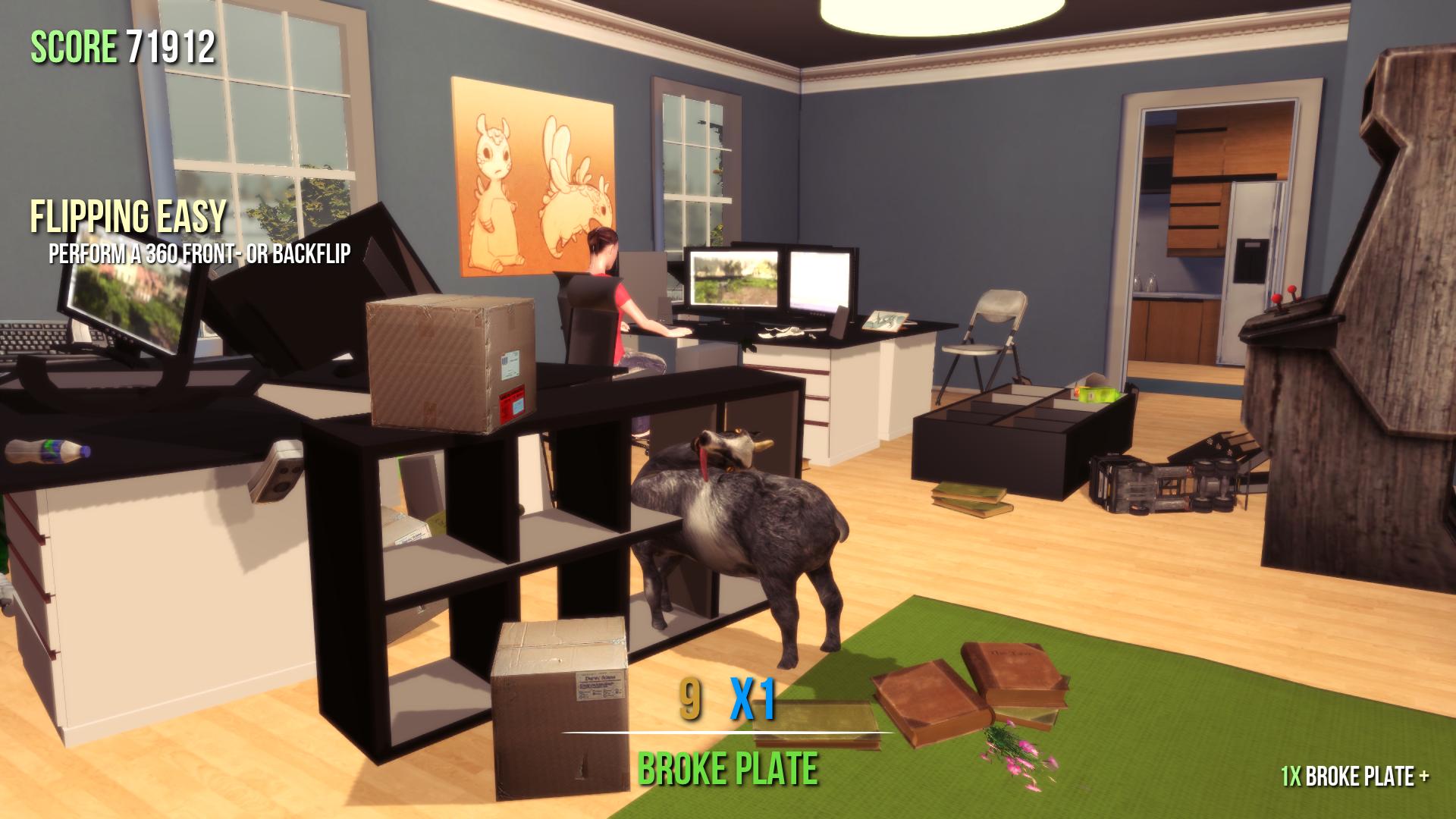 Goat Simulator combines two of the universe’s greatest achievements: goats and Garry’s Mod. Combined, these ingredients allow you to go on a rampage of capricious destruction. Not satisfied by gunning down humans with your back-mounted baseball pitching machine? It also provides you with a satisfying torrent of objectives, hidden bonuses, and facile point acquisition, to give you that accomplished feeling you might crave when destroying everything under-hoof isn’t enough. This is the truest experience of being a goat, if a goat had the ability to wreak vengeance on our sorry species.

This title is easily one of the best simulation games you might ever play in your miserable existence and like me, you might find yourself converting wholesale to its’ heady mix of exploration, physics engine hijinks and maniacal randomness. The game never promises you anything other than many hours of fun as you attempt to launch yourself into space using a trampoline, flip cars like a monster truck, or drag your tongue from town to town.

If pure sandbox fun isn’t your thing, Goat Simulator now also offers an MMO setting. This mode features a fully immersive world reminiscent of Skyrim as well as many charming touches that lets you know that the designers probably sunk too many hours into World of Warcraft. Included are a scrolling chatbox, Auction House (with a real auctioneer) and even a real raid instance.

Nico is writer and critical darling who likes picking apart games with aplomb. When she’s not playing with her cat, she often writes about the intersection of games and feminism at Apple Cider Mage. 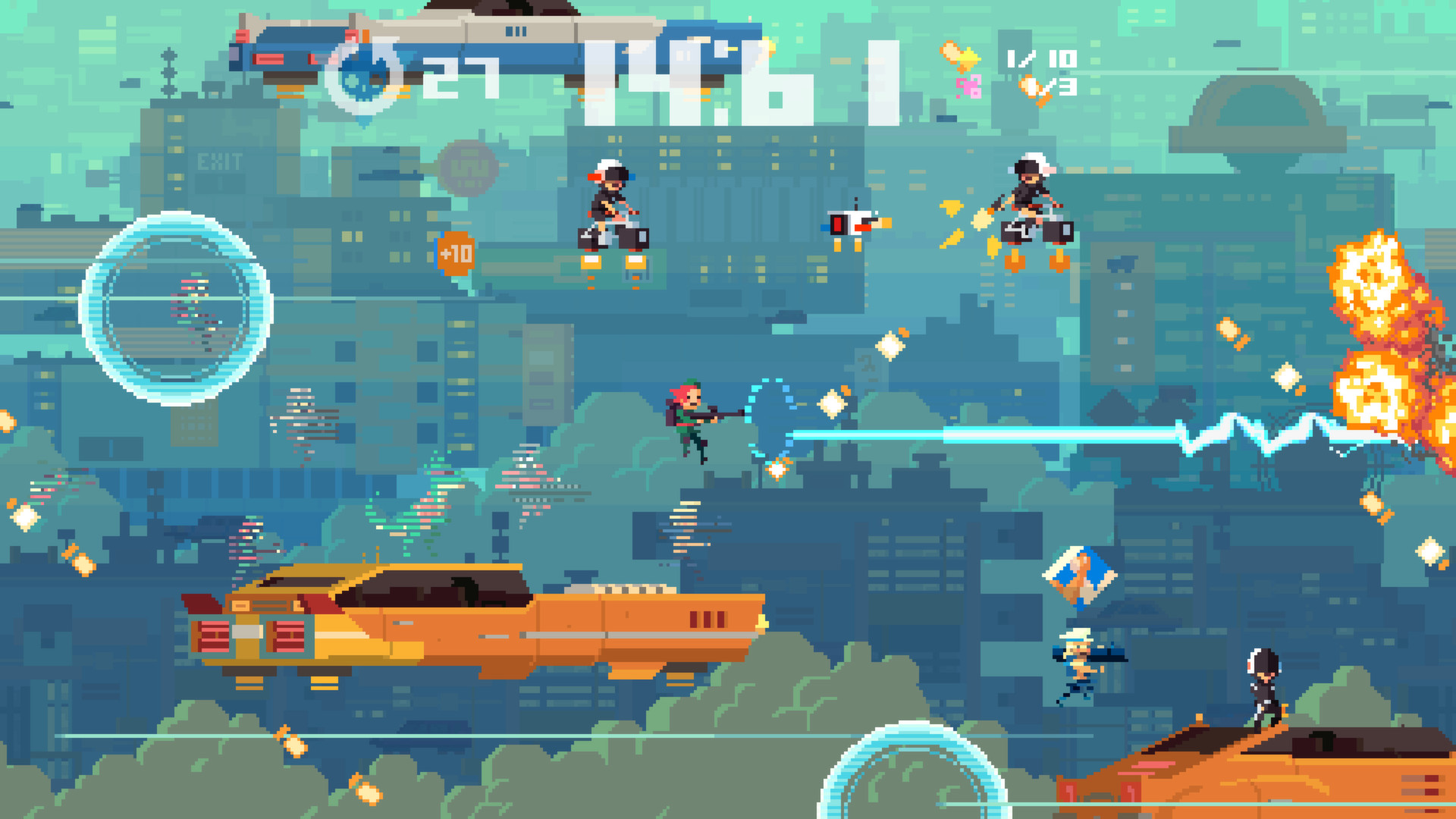 You can tell from the superlatives in the title that this isn’t just your run-of-the-mill Time Force. It’s super, and even ultra, like those 90s commercials for some plastic toy with blinking lights. The game is similarly colorful, and just like watching these ads as a kid, you don’t know what’s going on but you know you really like it.

Super Time Force Ultra is a hyped up side-scrolling shooter similar to Broforce, except instead of a parody of old action movies, this game, sporting the lovely acronym STFU is closer to the absurdity of Saturday-morning cartoons. Besides its human characters, you get to play as a dolphin, a dinosaur, a wizard and a robot (of course). Thanks post-modern whateverism! The story is similarly bizarre, but in the end you just visit places past, present and future and shoot everything up.

The game’s gimmick is that you can rewind time to combine the the unique abilites of your characters. Start with one, go back and add another, leaving the first to go through its previous actions. Repeat this a couple of times and your many attempts compound on each other to create total chaos and a huge fireworks display. It makes the game feel like a silly shooter and a clever puzzle, at the same time.

Quing’s Quest, by Deirdra “Squinky” Kiai, may very well be the most topical game of 2014. An obvious next step after their powerful GDC talk “Making Games is Easy, Belonging is Hard”, it was part of Ruin Jam 2014, a game jam “open to anyone and everyone who has been, is being, or plans to be accused of ruining the games industry”, and of course, it’s a direct reaction to that hashtag.

But it’s not only that. And it doesn’t let its difficult subject matter bring it down. Quing’s Quest is lively, joyful, funny, accepting and you’ll look stunning no matter what you decide to wear. It looks back at “Planet Videogames” with nostalgia, but recognizes the need to move on and how liberating it is to finally do so.

The protagonists are running away from the Misogynerds and the Gamer Police, on a spaceship named “Social Justice Warrior”, bound for new, unexplored planets. All the while trying not to lose their own vitality, energy and personality, confident that there must be somewhere, out there in the immensity of space, where they will belong.

Above all, Quing’s Quest displays its creator’s admirable courage to unashamedly affirm themself, in spite of everything. Perhaps that’s its most important value: it’s not only lively, it’s revitalizing. 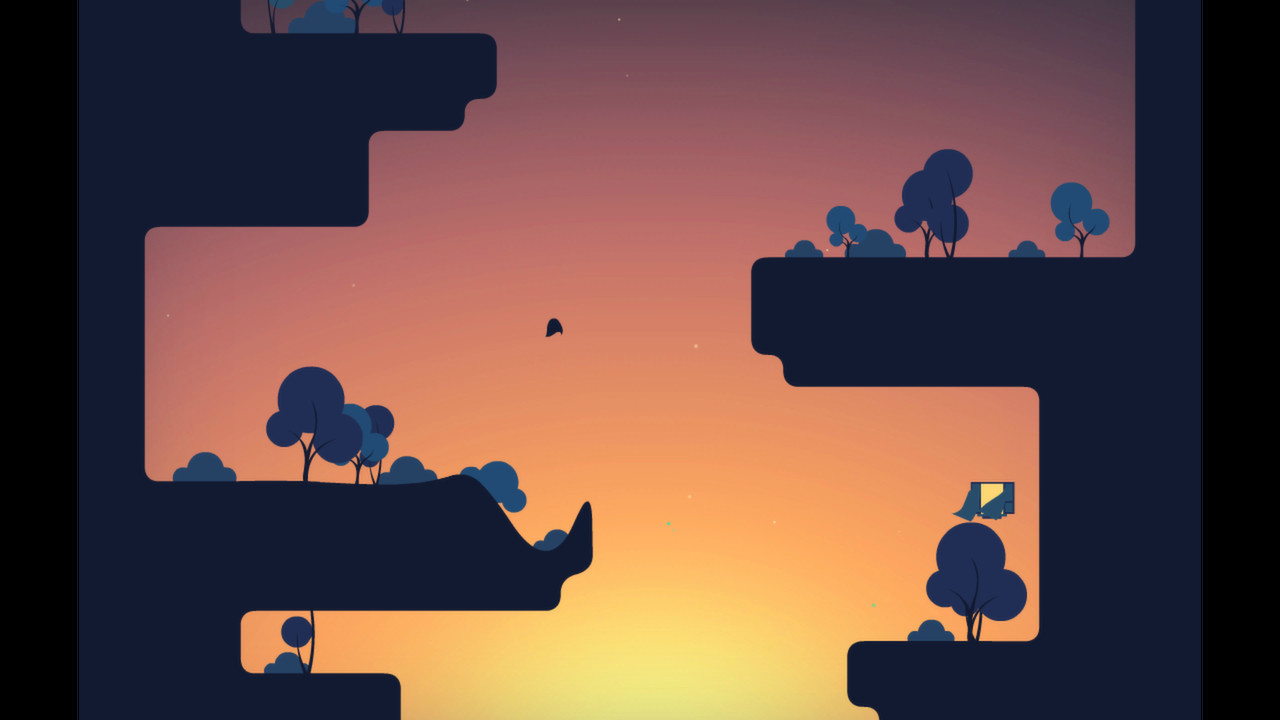 The Floor Is Jelly

The floor isn’t lava: it’s jelly! Finally giving us a visual answer to a childhood “What if?” question, Ian Snyder’s The Floor is Jelly creates a vibrant, colorful, and kinetic world for the player to hop and slide around in to their heart’s desire.

Only after my second playthrough did I realize just how much about The Floor is Jelly is about questioning and experimentation. My first time around, I was confused by the nearly blank, dark blue background that greets the player upon starting a new game. As if a metaphor for the game and curiosity itself, bright spackles of contrasting warm colors suddenly bubble up as you begin to move around. An award for curiosity.

And that’s what it takes to experience the game. There are no instructions, no manual for what a window, an elevator, or a swirling vortex does, no hard rules or objectives. The player is free to explore and discover the jumping mechanics, what parts of the environment benefit or hinder, and how physics work when everything is made of jelly. However, there’s a fine balance between making a game that lets the player discover objectives and mechanics on their own and a game that has excessively vague instructions – the latter leaving the player confused and frustrated. The Floor is Jelly toes the line and succeeds at giving you some direction through subtle hints in the environment – such as a little frog, showing you how to jump higher.

It didn’t matter to me that I often lost my way in the cycle of looping maps. Though marred occasionally by black tar, the passing color schemes of cool and warm colors felt inviting and safe and never grew tiring. The environment set the tone for my squeals of glee as I soared through the sky, across the moon and stars, to awkwardly flump onto the next jelly platform.