Some games just seem to just reach inside your skull and tickle your hypothalamus until you’re giddy off endorphins. Rayman Legends is absolutely one of those games.

I used to be sad about what Rayman had become. My first game in the series was Rayman 2, which opened somberly, with a desolate world overrun by robot pirates. At least it all struck ten year old me as very sombre.

So when Rayman became the frontman for the Raving Rabbid’s minigame carnival it felt undignified. Origins, despite harking to the previous 2D game I’d skipped, was infectiously, endearingly earnest good fun, but felt like a joyous farewell, an incredible but likely unrepeatable blast.

And then Legends came out and Michel Ancel’s team improbably raised the bar one more time.

I shouldn’t enjoy this so much, I really, really shouldn’t. What I’m supposed to value is elaborate systemic interplay, not smoothly crafted levels that usher you gently along lush environments, backed by a sensational soundtrack that brings the most unlikely instruments together for catchy tunes, each element blending into the riotously peppy experience.

Sure, its design can be reductive at times and there’s little in the way of challenge. Brains won’t be teased, only given a light massage with a hot towel. Musical courses, where the elaborately staged levels hit their majestic peak, hit a nadir in game terms by confining players to simply reading cues off the screen and working from a very limited script.

But everything around the player just rings with such an intense degree of raucous vitality it’s near irresistible. Designers often talk about “finding the fun” in something, but the production is the show here. They could make Match 3 rival Disney’s animation and I’d be overjoyed to play it for days. It’s all about the effects. And with this level of easy, unrepentant charm, I don’t care. 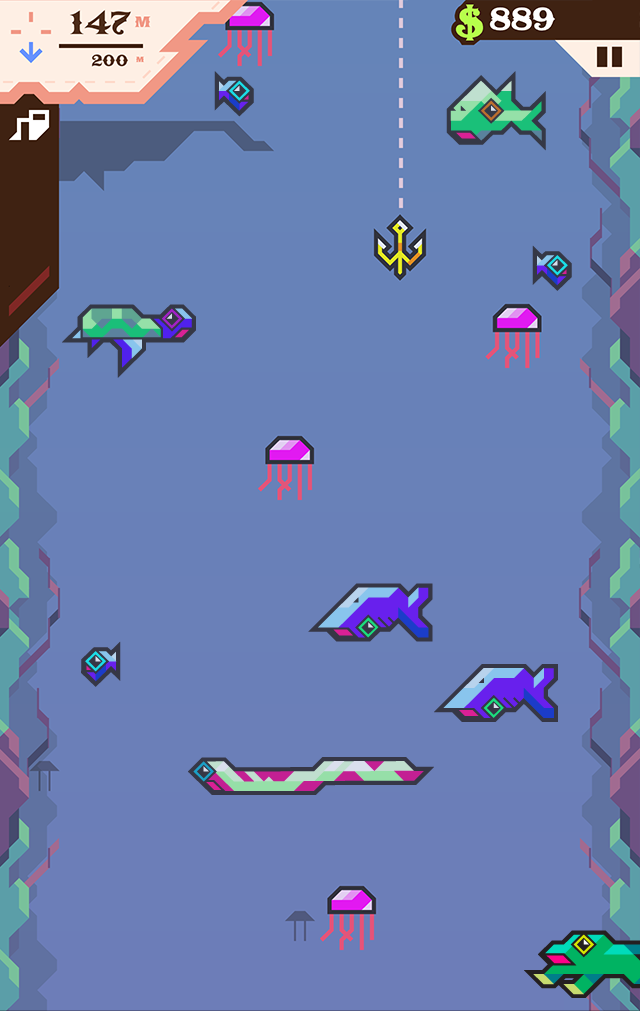 Our descriptions of videogames are often hyperbolic, whether it’s with titles like “Super”, “Ultimate” and “Game of the Year” editions, or the publications that award those Game of the Year titles in the first place. But in the case of Vlambeer’s Ridiculous Fishing, the moniker is justified: you know it’s not just any fishing trip when your blade-spitting lure dangles from an electrified line, and your catch is harvested by blowing it into chunks with a shotgun.

But ridiculousness alone does not a great game make, so Ridiculous Fishing packs three delightfully addictive microgames into every casting. The descent into the briny deep is an endless plunger, competing with your friends for the longest distance. Snag one fish too many and the game inverts into a sprint for the surface as you whip the lure through as many aquatic denizens as you can. With a final flick of your wrist, the fish break the surface, where you’re waiting with your weapon of choice.

Ridiculous Fishing packs everything you could want into a mobile game: it’s brilliant in short bursts, with just enough content and challenge to keep you playing and even a surprisingly poignant story of redemption. New fishing holes bring new challenges, like the dreaded ‘clone jelly’ that multiplies every time you touch it, wasting your hard earned catch. In a marketplace where ‘free’ phone games dangle from hooks, coated in enticing candy until you’re ensnared in their microtransactions, the fact that great mobile games can just exist – completely and unequivocally – is something worth celebrating.

– Alan Williamson, Five out of Ten 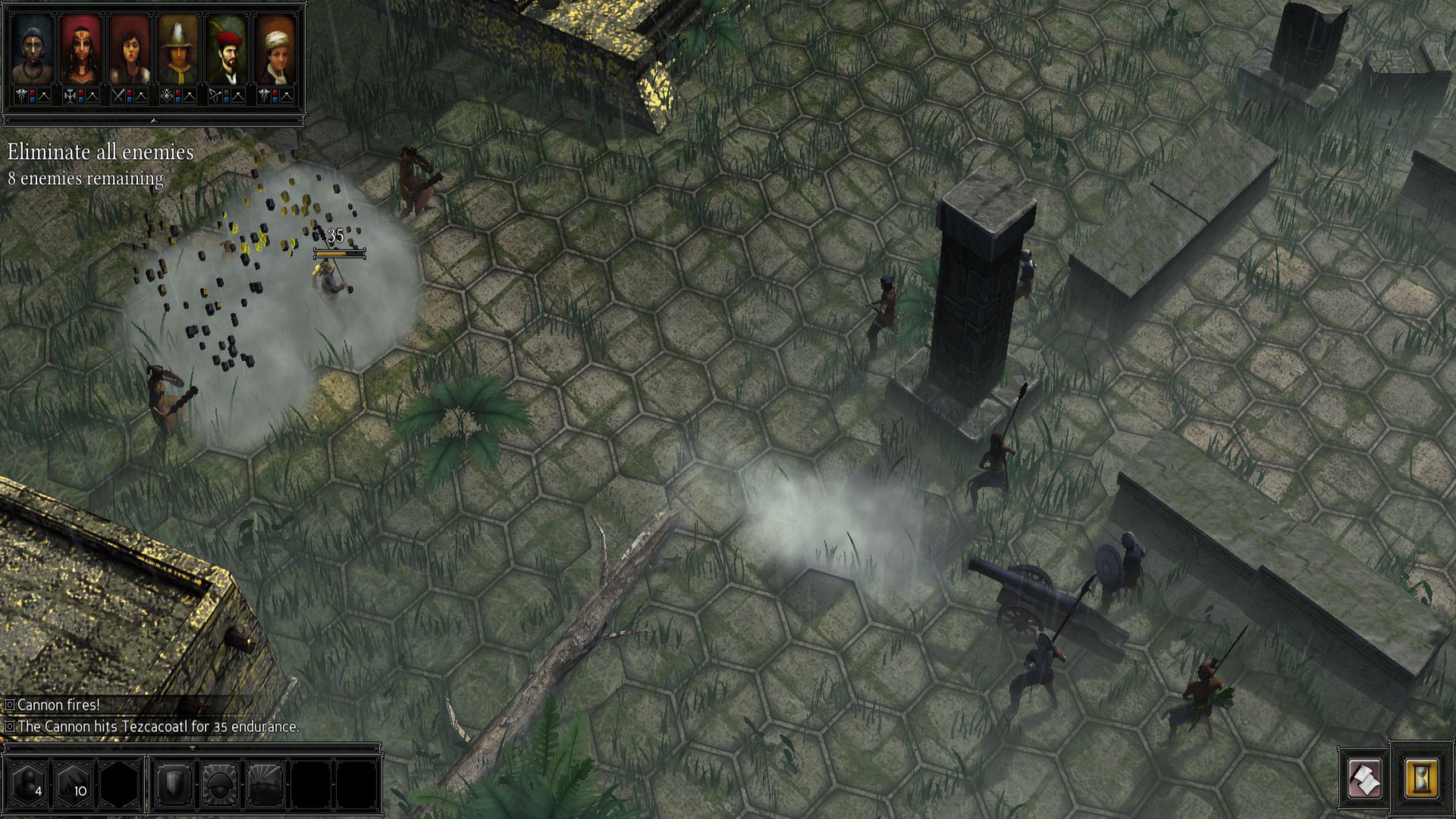 Roleplaying and strategy games are based on building skills in battle and ultimately vanquishing a race of evil spreading from Mordor. Most games, and the people that play them, gloss over the colonial subtext beneath layers of fantasy and abstraction. Expeditions Conquistador makes that subtext its outright objective. The year is 1518, and you are charged with exploring Mexico on behalf of Spain instead of Hernan Cortes. The goal is simple: accrue enough gold to impress your king. While there, however, you will get wrapped up in indigenous peoples’ politics and will be forced to meddle in them. The game invites your arrogance and challenges you to explore peacefully, centuries after Europe’s first expedition into mainland South America. The tactical, hex-grid battles and the day-to-day resource management are brutally difficult.

Exploring the world responsible and peacefully is ultimately impossible. In the quest for shiny things to impress an off-screen king you must eventually intervene in local disputes you have little knowledge about and even less investment in. The kicker, however, is that failing to act will only prompt another expedition by Spain’s unimpressed monarch: one conducted by a captain more ruthless and efficient than the player.

It’s a game without easy answers, where every decision feels significant and being good simply means being less exploitative than one could be. Taken with the effective use of random events, strong writing and characterization and a haunting score, it marks one of the smartest and most challenging – mechanically and morally – RPGs ever made, to say nothing of it as an underlooked gem of 2013. 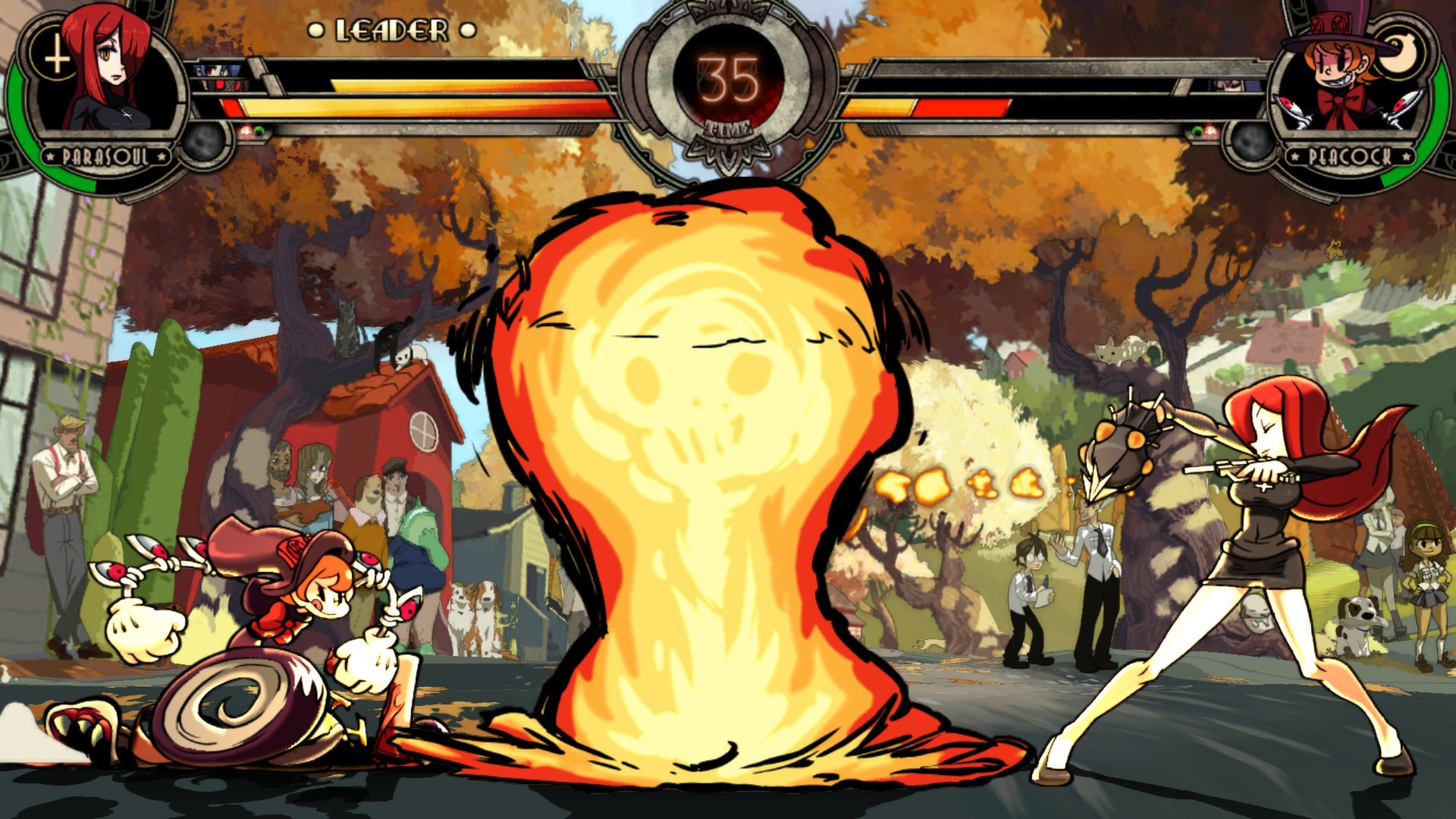 There’s two things that I have to step over first. Nurse Valentine has them on display most of the fight. Skullgirls has an aesthetic that borders on Kawaii-noir and sprints all the way up to paraphilia. If this bothers you, you really won’t like it. It also requires a gamepad. You can try and get through the tutorials just on keyboard, but I’ve not managed it yet.

Welcome to the blending of Darkstalkers and Dark Horse’s Arcadia cycle, a jiggling amalgamation of The Maltese Falcon, Dead or Alive and Hellboy.

While the recent slew of fighting games seem to have focused on Final Fantasy style special moves and Killer Instinct gazillion hit combos, Skullgirls just goes back, forward, heavy punch and rolls across the screen.

Each of the characters has a distinct movement set, a distinct schtick and ultimately feels and plays very differently. Peacock is the troll spammer, Cerebella is the powerhouse, etc. Then there’s the choice on whether you have a single professional, or 3 jobbers. It greatly improves the lastability.

While you’re fighting, the announcer enthuses, the backgrounds rock with you and the music is a sheer delight. The girls may be Playmates, but the whole ambience draws you into their world, each of them sneering at the others due to their past relations.

The single player campaign will be romped through – with the usual stall as you try and work your way around the last boss, who is a dirty spammer – and then you’ll move on to online. And you’ll get slaughtered. There is no messing about here, but through the cracks in the combos, you’ll begin to see light. Now you’ll be heading back to those Tutorials to find out what you missed.

Even when you go back, it’s still a pleasure to run off one of the big combos. It feels like you’re doing well, even if you’re getting spammed by Peacock.

Because when you leap over her, and get off the DOA…

“Side effects may include nausea, headaches… and death!“ 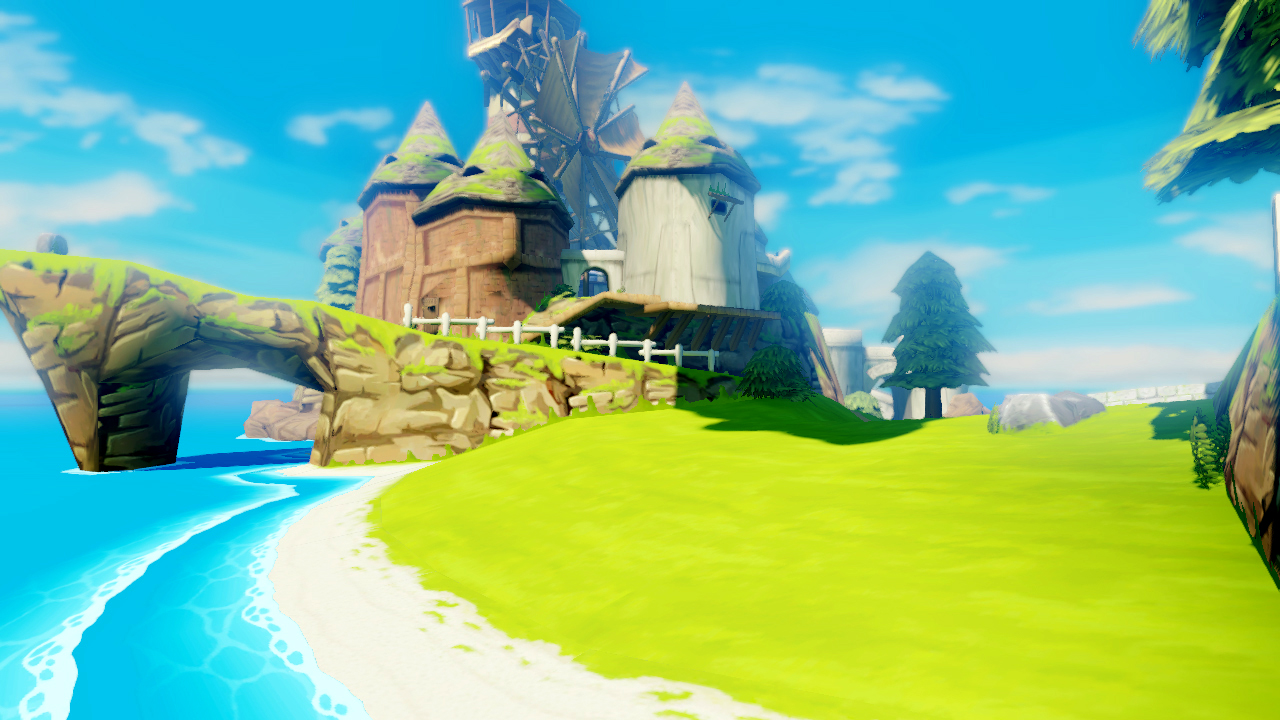 It’s a constant toss up between Final Fantasy VI and Wind Waker as to which is my favourite game of all time. Both provide me with boisterous charm and a sense of adventure and wonder. But while Final Fantasy VI is still stuck in its attractive yet limited pixel art style, Wind Waker’s ocean of personality remains. It’s only enhanced with a bump to 1080p, adding dazzling depth and clarity.

What Wind Waker HD does better than any other game is how much it feels like an epic. The cast of characters is fairly small, but the way it uses them to subvert Zelda tropes and tell a swashbuckling story that touches on themes of responsibility and self-destruction is frequently joyous. It’s the world of Wind Waker, though, that is the star of the show. A vast sea that seems to have no end, populated by islands that range from massive dungeons to small pockets of land that hide a single secret.

But what secret? The whole game feels like a great mystery, of what we will find next. The way the an island glides into view, growing from a brief silhouette to a full fledged mountain, full of even more wonder, makes the ocean feel massive but never lonely.