Gone Home begins its ascent to grace by tackling the fictional demon that is the teenage love story: A genre usually so heavy-handed and melodramatic that one enters the game expecting everyday conflict to be blown up to world-shattering proportions. But Gone Home defies that expectation, instead opting to tone down bombastic love affairs for passed notes and the tiny amounts of pain that can bring a family to the breaking point. Told through the lens of a sister returning home from a long vacation abroad, the game paints a sort of unique kind of apocalypse that’s appropriate to Fullbright’s pedigree of environmental storytelling and encourages players to treat this old abandoned mansion as if it were the depths of Rapture. This becomes particularly evident when the game begins revealing its hidden folds of secret passageways and locked doors, only giving clues to the player through the objects and environment they interact with.

The contents of Sam’s diary, which detail her growing fondness for her new friend Lonnie, reveal a world that feels closer to the one we live in rather than the far-off fairytales we usually explore when handed tools like this. References to Street Fighter II, fighting with our family, the SNES and the shadow of parental abuse do more to hit players in the heart then the most nostalgic song played over a blasted landscape. Gone Home tells us a story many of us can relate to using the tools we learned to explore other worlds, and for that it easily is one of the strongest games from 2013. 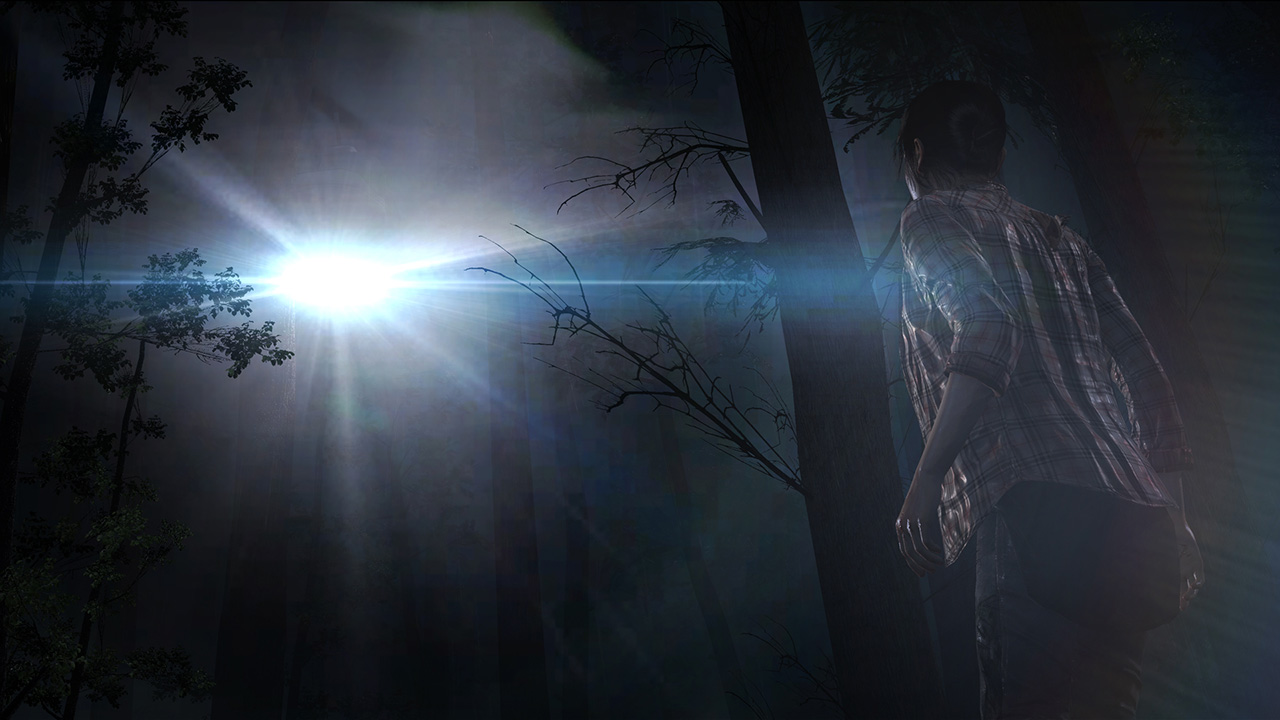 I don’t think Beyond: Two Souls was misunderstood even by its worst critics. Its scenarios for Ellen Page and her supernatural sidekick were downright wacky, awkward and unintentionally hilarious. The writing was comical, the design was insincere and even as an avid supporter of straight path gaming and quick time events, I found the game to be an unengaging disappointment.

Nonetheless, Beyond: Two Souls deserves mention in a list like this. Getting Willem Dafoe and Ellen Page, A-list movie stars, into motion capture suits and fully rendered as characters in a videogame has to count for something. It’s a revival of the interactive film, a genre that is now finally getting the production values it needs to take off. David Cage, the outspoken founder of Quantic Dreams, may not be redefining drama with his high polygon counts, but his esteem for hollywood professionalism is luring big names to the table in the process.

And it’s successful, at least commercially. The cinematic experience, a movie game accessible enough to reach new demographics. Walk forward and bend an analog this way or that, and drama unfolds. That’s groundbreaking for this industry, I think. That I can go to a RedBox with my friend who’s never touched a Dualshock before and say “Hey, want to play that Ellen Page movie thing?” The controls are just that intuitive, and the adult content, the power of modern hardware and a natural form of co-op create the perfect opportunity for the gamer and movie-goer to bridge a gap of appreciation.

The ambition is real, the results are, if horrible, still encouraging, and I want more of it. Even if it’s just a bad movie to laugh at, I’ll gladly pay the $2 rental fee to have Ellen Page fail sit ups or get clotheslined by low tree branches that I missed the button prompts for. “Missed.”

I don’t know whether it’s because of stuff that happened or some worrisome larger pattern, but the last few winters have been rough for me. I don’t know why I’ve been finding it hard to get out of bed for months, lost hours to distractions and felt entirely powerless to stop, or periodically avoided social interaction because I felt too gross for it. Depression Quest played no small part in admitting that this is a problem and then trying to address it.

A Twine collaboration by Zoe Quinn, Patrick Lindsey and Isaac Schankler, Depression Quest is an exercise in verisimilitude that puts you in the shoes of a mostly nondescript character suffering from depression. It puts you through a number of scenarios relating to your job, family and significant other and asks you to respond. The ingenious thing about it is that while the game always lists a number of options for dealing with problems, few of them are actually available. Some might be grayed out because of earlier decisions, but the most reasonable or comfortable paths of all are just generally inaccessible.

In presenting this limited possibility space, Depression Quest helps you understand the insidious mental binds that such illnesses place on you. You could hypothetically do all these things – tell your girlfriend how you feel, appreciate time with your family, work hard and enjoy what you are doing – but you really can’t. It’s not about needing to try harder or push through it, sometimes the thing you want to do just isn’t an option.

Didactic games of this kind often get shit for pointlessly appropriating the medium to appear less dry, to sugarcoat some lesson that doesn’t actually benefit from being in a videogame. Or being in what, in the court of public opinion, isn’t even a game. Not only do I think it’s overreaching to claim that only what couldn’t exist elsewhere should be allowed to become a game, the accusation is also patently wrong in the case of Depression Quest. The only reason it is so powerful is because it’s a game, and involves you directly in its choices and non-choices.

Depression Quest is revolutionary, not because of its mechanics but its social impact. It exposed limiting conceptions of our medium as well as problematic attitudes towards mental health issues. Zoe Quinn has gotten the lion’s share of this bullshit, plus old fashioned misogynistic harassment on top, and still soldiers on to bring the game to as many people as possible, for free. The importance of this gem cannot be overstated. Games would be the less had it not been made, against all odds. 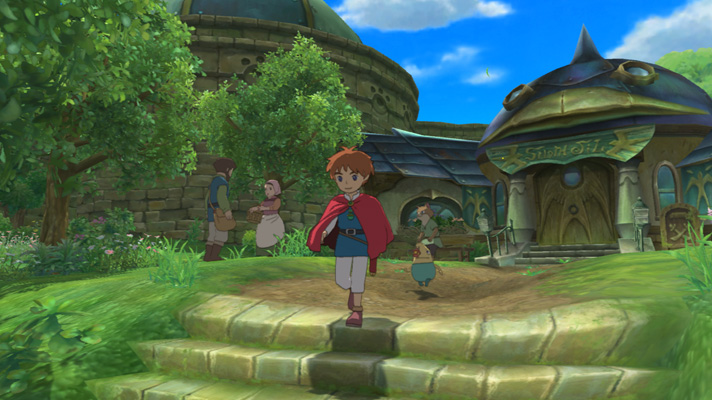 Has a JRPG ever been so JRPG? Ni No Kuni is proof positive that what the genre of turn-based battles, exotic art and affably complex characters needed was just proper execution. For the last eight years, the JRPG has been a stagnating beast. Unwilling to change, the battle systems that once innovated had become rote and tired. What were once games with an emphasis on quality storytelling and combat had become bloated and unwieldy.

But this year saw a swell of change. Games like Fire Emblem, Shin Megami Tensei IV and Final Fantasy XIV are all carrying the JRPG flag high and proud, but Ni No Kuni flew that flag the highest. A collaboration between Dragon Quest developers Level 5 and animation studio Studio Ghibli, Ni No Kuni brought together a beautiful, charming world with a fiercely intelligent battle system. The art style is bright and unique, a Ghibli film brought wonderfully to interactive life. The translation is impeccable, full of wit.

Ni No Kuni also hides a darker surface, however. It deals with themes of loss and abandonment and the effect abusive parents can have on their children. There’s a melancholy to the game, as it delves into the confusion and emptiness children feel when left unloved and hurt, and then further shows how all people can lose their sense of self. Yet there’s always a brightness at the end, always a reason to push forward. It’s a fantastic JRPG and a fantastic game for younger players, never patronizing but always hopeful. 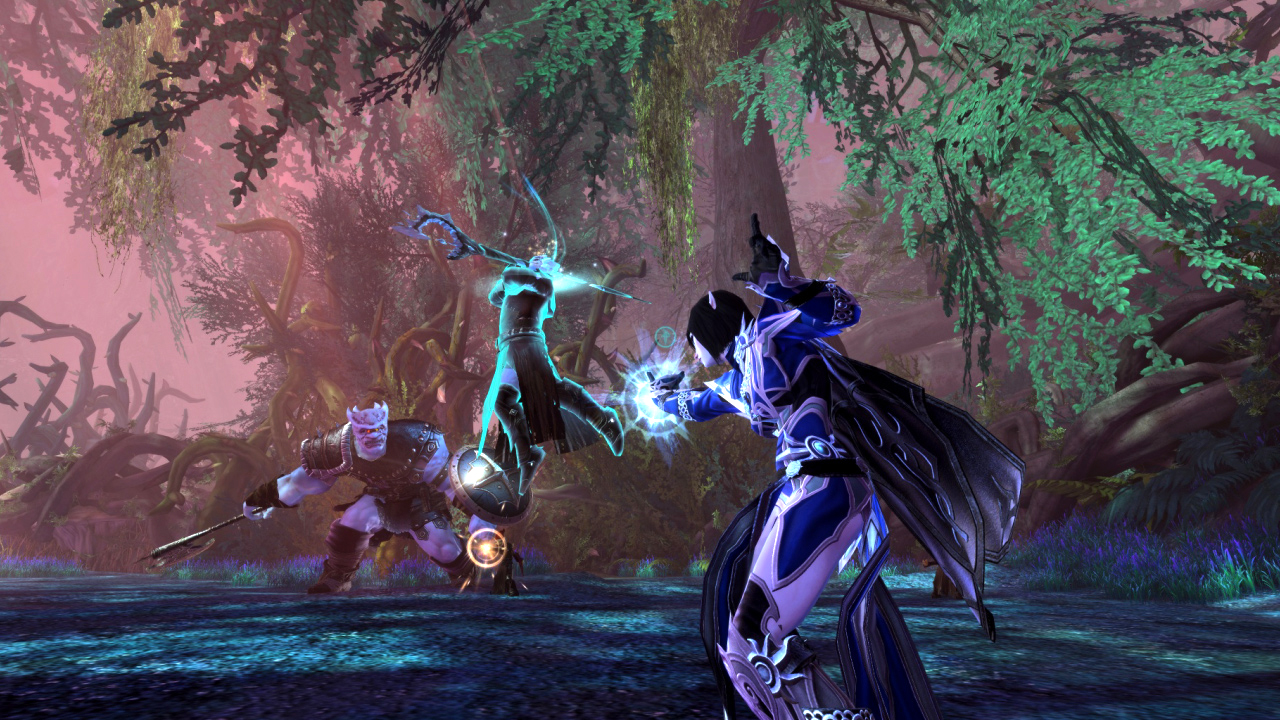 Constitution (16) – The child of 4th edition D&D and Kickstarter sensibilities, Neverwinter is a story based action MMO, rather than the personal growth sagas of Everquest, or the sprawling world of World of Warcraft. It develops the character as much as the world. The economy works equally well by making sure that the lowliest player can supply the high end player, and vice versa.

Charisma (16) – Parody and cultural references are about, but never take away from the world. And it’s just fun! You want to run a 5 man DPS group in a dungeon? Sure. You want to roleplay in a cave full of bats? Sure. You want to have a sexy dance off up in the trees? Sure. It understands cosmetics as well. The really nice stuff is reserved for the elite, but never so far away that you can’t look upon it and dream. And when you upgrade your kit to uncommon, it really feels like an upgrade. Rogues get a Fedora at level 20. How could you say no?

Strength (14) – Neverwinter has a lot of cosmetics, which can put an awful strain on its server-load. That’s quite normal for most MMOs, but for one based on timing for its actions, it’s a lot more painful. When you simply can’t get a heal spell off because someone on a giant spider just rode past. But if you want 10 demons throwing fireballs into your group? No slowdown.

Intelligence (12) –  One thing above all else makes it stand out from the rest of the MMO markets. The Foundry. This rather beautiful tool-kit allows players themselves to build their own quests and get rewarded for doing so. There’s some awfully clunky bits about it, but when you see the wonders that people have made, you’ll beg for your chance.

Dexterity – (9) There’s a clunkiness to the controls which at times is unforgivable. All interactions need full line of sight, which in a wonderfully decorative place, can make things frustrating. The lack of proper social commands makes dungeons a rushed silent affair with public players. You run just slow enough to be annoying when you have a wide expanse to cover. Just small niggles, but they do build up.

Race: Dwarven Bard – Overlooked, but full of content. Jack of all trades, master of a few, but if you need something to go “RAAARGH!” and run down the corridor swinging an axe, there’s none better.