We combined a bunch of sticks and ended up with Fallout 4, Subnautica, The Long Dark, ARK: Survival Evolved, and Monster Hunter 4 Ultimate.

Rather than stray from the core formula that has made modern Elder Scrolls and Fallout games so addictive, Bethesda have stuck with the Gamebyro engine for their latest Fallout title and instead revamped it in several huge ways to future-proof it as a solid base for the modding community. Fallout 4 was immediately familiar mechanically, but from the get-go was showing off new features and design shifts that made this new entry into the series one of the most exciting yet.

The new direction for the cut-scenes is excellent; dropping the static one-to-one conversations of older games, Bethesda have made much better use of dynamic camera, animation, and varied casting for their voice acting. Controversially, the player character was also given a much more active role in conversations with their own voice and a highly specific back-story. While risky, it pays dividends in allowing scenes to come to life and meshes well with the overhaul made to animations and spoken scenes in general.

That said, combat is the main focus in this iteration of the Fallout universe, with enemies making good use of the expanded repertoire of animations to traverse the terrain by leaping over obstacles, shooting from cover, and delivering some painful-looking throws that wouldn’t look out of place in a fighting game. The slimmed down RPG mechanics from previous games make the fighting less cumbersome, and the crafting system for weapons and armor make a visible impact against the tougher bullet-sponges you may encounter.

The gradual drift into a more action-orientated Fallout will not appeal to all, but the greatly enhanced cutscenes, combat, colorful visuals, and that same core gameplay that has sustained these games for so many years have given fans a game with a lot to offer.

Sega Chief can be found on Twitter, and makes mods for Final Fantasy 7 on Qhimm. 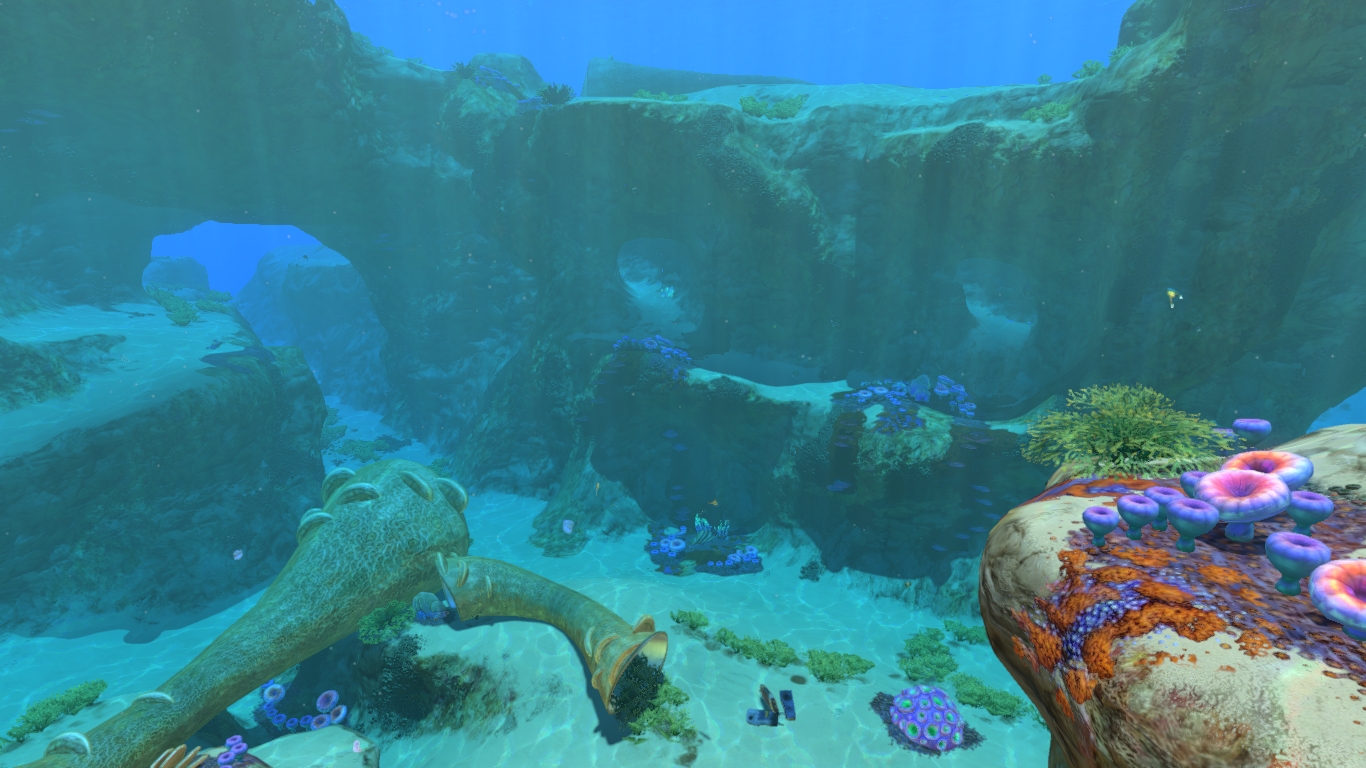 Between the many games of recent years that tried to ride on Minecraft’s coattails and the many games that attempted to follow up on the success of DayZ, there’s an ever growing number of games trying to combine the two: multiplayer survival sandboxes in which avatars in various states of undress assemble rectangular buildings that are rivaled in their scope only by their ugliness. This design paradigm has become so ubiquitous that even the mega-budgeted Fallout 4 now bows to the hideous cubicle aesthetic.

By throwing you onto an alien water planet, Subnautica puts an interesting new twist on this genre while cleverly solving a lot of its inherent issues. The maritime ecosystem subverts player expectations and sidesteps the budding trope of punching trees to make tools. Traversal is complicated by the need to come up for air, which serves as yet another reminder that you are like a fish out of water here (except the opposite of that). The plot conceit of a crashed terraforming ship provides a much needed landmark that helps you keep your bearings during exploration, while also explaining why your futuristic crafting tools come preloaded with blueprints for marine equipment.

Most importantly, the setting lends a unique atmosphere to the game, one that you thankfully get to enjoy without the presence of scantily-clad strangers from the internet. The underwater environment is one that feels alien to us even on our own planet, making you immediately susceptible to the added strangeness of Subnautica’s colorful flora and fauna. The water can be a terrifying place to be, particularly if you lose sight of the ocean floor and find yourself exposed on all sides, but it can be soothing too, in the bright shallows with its beautiful coral tubes and mushroom groupings. This creates a delightful push and pull dynamic, where I find myself as fascinated by the darker reaches of the ocean as I am scared to actually go there.

Of the many games that now let you build your own home, I have not played a single one that makes it feel as meaningful as Subnautica. Rather than desecrating a virtual landscape with a pointless megastructure to one-up another player, my humble underwater base provides a delightful sense of shelter and belonging in an otherwise unfamiliar environment. After all, you need somewhere to come back to after your adventures at the bottom of the ocean.

The Long Dark is the most exciting boring game I own. It’s a game where managing to loot the fishing huts on the lake outside my base is a major achievement, followed by spending three in-game days stuck inside reorganizing my stash. In survival games like Don’t Starve you just set out across the map, but The Long Dark both demands and disincentives exploration. Every journey is strung with a complex system of pros and cons; traversing the landscape itself is ponderous and deadly. It is almost intolerably slow, but my heart never stops pounding.

In one game I spawned in the middle of the night in a new map and stumbled through a snowstorm, slowly freezing to death. Eventually I died huddled against a burnt-out house, my screen a blur of blackness and snow. A new game put me in roughly the same place, but in the cheerful, frozen light of day. As I wandered, taking in the snowy vistas and wolf-strewn roads, I came across the house my last iteration had died beside. I realized her final resting place was mere feet from a giant barn, one full of food, warm clothes, and fire supplies; in the dark and the blizzard I had been unable to see it. The realization was both frustrating and thrilling, and it made even the short prior game an epic experience.

Though still in Early Access, each update seems to make the game stronger, more complicated, and more interesting. The promised story mode is set to arrive soon, and it will be interesting to see how Hinterland turns its snowy sandbox into a narrative experience. But right now the game provides me with endless hours of peaceful chores punctuated by pulse-pounding disasters and near scrapes, all strewn across a beautiful minimalistic environment that calls to me to explore even as it drives me back. 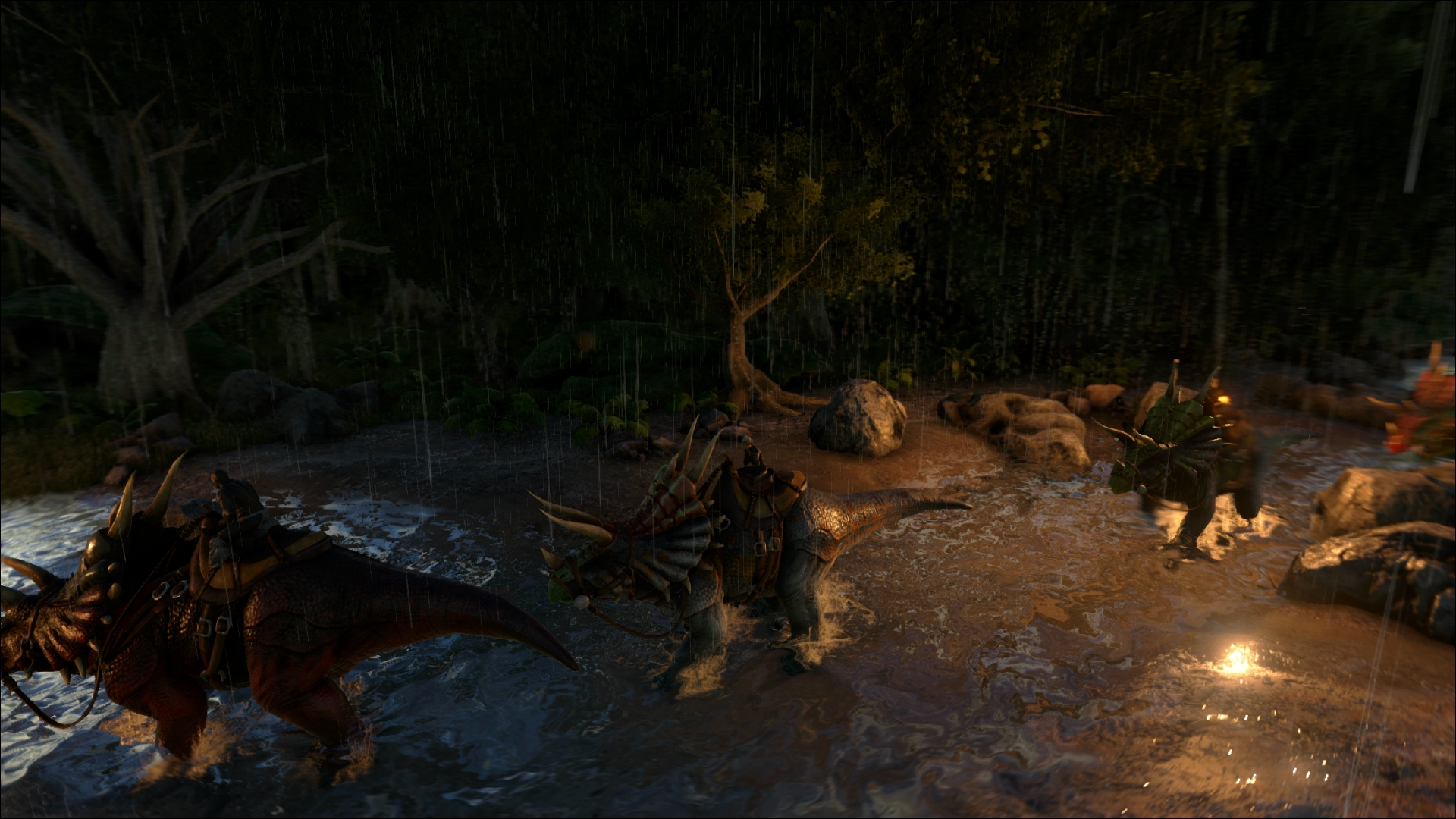 There are dinosaurs in ARK: Survival Evolved and this is all the reason my friends and I needed to try the game. The sheer childlike-glee in exploring a world full of prehistoric creatures and similarly mysterious and magnificent relics kept us wanting to dive deeper and discover more. It didn’t take long until each conversation was permeated with dinosaurs – feeding, training, riding, hunting, and more. The element of discovery never seemed to decay and kept our curiosity piqued.

At first I was afraid that ARK: Survival Evolved would be just another survival sandbox game that would fall flat within a few short hours. In my experience, these games tend to lack features, an interesting emergent narrative, or simply fail to keep the player interested over a long period of time. ARK provided a number of features and mechanics and filled the gaps in between with environmental storytelling that resulted in a narrative mysterious enough to keep players wanting to discover more.

My friends and I started on the beach in a small hut with a fire that was lit on occasion. We tamed our first Dodo, moved inland, became craftsmen and hunters, built a settlement, tamed and hunted creatures larger than our first house, and continued to unravel mysteries together. Each day becomes a new chapter in the story of our lives in ARK: Survival Evolved.

Mahreen Fatima embodies creative chaos as a 3D environment artist, game designer, and writer. Starting with a controller, she spiraled out of control into a life of creating art, making games, and writing opinions. Her musings can be found on Twitter and her work on her website. Secretly one of the best action games ever made, casually leaning against a rock hard monolith of grind, pleasingly padding out a panoply of enemy encounters in hundreds of cookie cutter quest clones over a trio of tiers of difficulty. Monsters present themselves in three stages as you learn the game. A writhing ball of nastiness you tiptoe around and prod and poke in whatever opening presents itself. “How was I meant to dodge that?”, “No way you couldn’t get hit there”, “I guess I’m safe under here while he does that”, “Probably shouldn’t be anywhere in front of that dude just in general”.

Your confidence and your free time drops out underneath you as you spend an entire afternoon trying to unlock some dumb sword and all of a sudden you find your subconscious has been doing its homework whilst you’ve been fiddling around with the metagame. Each encounter unfurls into an undulating three dimensional labyrinth. You can now navigate the monsters corridors and alcoves flawlessly. The walls extend, contract and fold in on themselves with every snap of its fangs and beat of its wings. You begin to get an unnerving sense of what the monster is going to do before it does it. You never were consciously tracking when it would use a particular move, but all of a sudden, every so often, you just know a fireball is coming.

Would I enjoy the game as much if all the grind was stripped away? Probably I would tire of it within ten hours or so without the intoxicating proxy of self actualization that comes with forging new weapons and armor. In a weird way I resent myself for that, that I can’t enjoy it in its purest form. But in a stage of my life where I find myself with more free time than I am comfortable being constructive with, those 700 hours and counting of poking monsters with pointy sticks just weren’t all bad. Goaty.

Reuben was the real monster