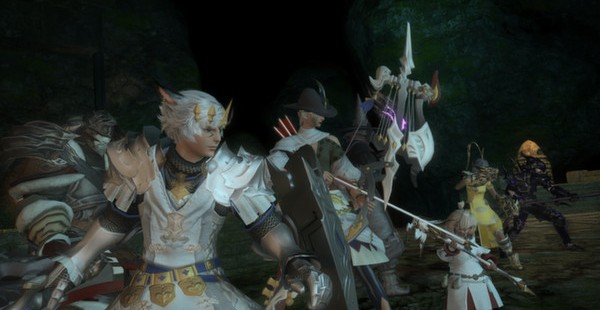 Storyplay: The Clashing Fantasies of Storytelling and Multiplayer

Melody wants us to tell each other stories.

The best examples of a genre can show us not only where the format excels, but also where it falls short, where it’s limited by its very structure. In the case of MMOs, the formula made famous by World of Warcraft has been perfected, but that perfection means it hasn’t fundamentally changed over the years. We’re now at a point where it seems nearly impossible to simply keep improving upon it, though in order to stand out from the crowd, future MMOs will have to innovate and find solutions for some of the genre’s failures.

In order to shine light on some of the aspects of the MMO that necessitate a profound reimagining, it can be useful to examine Final Fantasy 14: A Realm Reborn. The game emphasizes its narrative by placing it front and center in a way that is truly unparalleled in its genre, save for The Secret World. This is key because some of the game’s most interesting flaws concern precisely its storytelling and its failure to harmonize with the multiplayer aspect that is integral to MMOs. While similar problems are ubiquitous in the genre, they don’t stand out as much when the game itself doesn’t seem to care about its narrative in the first place. The solutions to address these flaws may very well be the seeds of a new genre of story-driven multiplayer games.

A Realm Reborn is also a good starting point for discussion because it has already mastered the traditional elements that go into making an MMO, from its mechanical systems to its social aspects. In fact, none of its ideas are truly novel, but everything has been designed, written, and implemented with the utmost care and attention to detail. From rules that make it impossible to steal kills from other players but give rewards for helping them to a system of sidequests that spring up on the map at irregular intervals and require several people to complete,  does a great job of promoting collaboration among players even outside the usual dungeons. The quests are never just experience dispensers, but provide insight into characters, places, and cultures. They even do away with any kind of fight or challenge when appropriate, simply letting the writing stand on its own and dominate the stage. 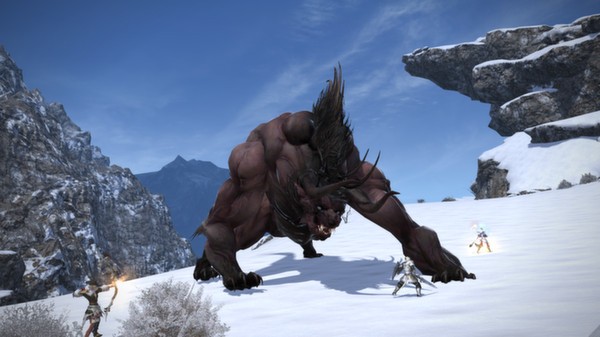 There is still some room for improvement, and there are minor slip-ups that could be fixed, but the game as a whole is polished enough to let us ignore the smaller details and focus on a clear and unobstructed view of the bigger picture. Let us then examine where and why it fails on a structural level, especially when it comes to storytelling.

First of all, the overall plot arc is almost entirely predictable just from watching the introductory cutscene. This is not the fault of some overplayed foreshadowing or lack of creativity on the part of the authors. Rather, the genre, including the economic model through which the game sustains itself, allows for no other conclusion to the story. If MMORPGs are all about the linear acquisition of power, and we seem unable to imagine them in any other way, then the only narrative that really fits is the classic hero’s journey. And If we are to continue existing in the same world as everyone else after the end of the journey, if the same monsters and enemies are to keep spawning in the same places, the only possible finale is “You have defeated the bad guys… for now.”

That ‘for now’ is crucial: it’s the only solution short of giving up trying to explain why your character is still here, still fighting through the same dungeons— as well as a convenient tie-in for future expansions. You obviously can’t fail or the world as you know it would cease to exist, and you most certainly can’t achieve a definitive win and a strong closure. FF14 often tries to provide clever plot reasons to justify that ‘for now,’ but it’s still very limiting in terms of where the game can actually go with its story. It’s no surprise that the most interesting sections in terms of plot do not belong to the main arc and its grandiose scale, but to the smaller, more intimate moments and the inconsequential narratives surrounding minor cities and characters. The optional quest line in which the player assists Inspector Hildibrand in what turns out to be a superb piece of slapstick comedy is more surprising and memorable than the entirety of the epic main plot, and not because the latter is poorly realized. 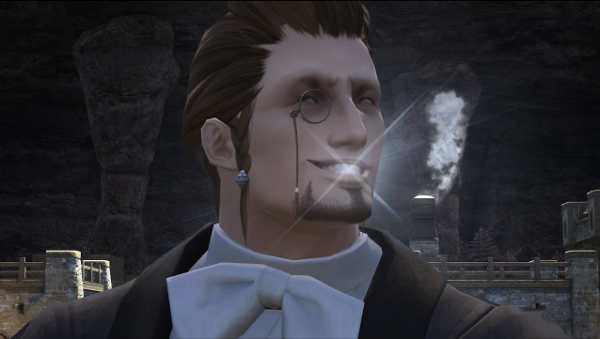 Still, the most important and interesting failure of FF14 lies elsewhere, namely in its inability to truly combine storytelling and the ‘Massively-Multiplayer’ part of ‘MMORPG.’ Almost the entirety of its story moments happen in what is in practice single player, like The Witcher or Skyrim. There may be other real people walking around the same world, but they often have the same consistency as the ghosts of other players in the Souls series.

FF14 does make an earnest, if clumsy, attempt at unifying storytelling and multiplayer, but it simply ends up backfiring. The last two quests of the game’s main story are in fact dungeons for eight players. The entire plot arc culminates in these fights, so these dungeons are filled with crucial cutscenes and dialogues— more than 15 minutes of them in fact, without counting the clip triggered by exiting the dungeon. Now, in order to solve the problem of player availability, for every one or two players who have to do these dungeons for the first time there will be six or seven who are simply replaying them or grinding for the rewards. These players are only interested in completing them as quickly as possible and so skip all that text, which they’ve read before. These opposite motivations breed conflict among players, as the former are pressured into sacrificing their enjoyment of the game’s story while the latter will feel as if they’re wasting time.

A Realm Reborn shows us that MMOs don’t know how to effectively take advantage of their multiplayer nature for storytelling. They know perfectly well how to do so in other contexts, through social features, dungeons, PvP, and so on. But when it comes to narrative, they fall back on the same techniques as single player RPGs. Showing a cutscene to eight people at the same time cannot be a satisfying solution, especially when there is no time to process it because the focus immediately switches back to the mechanics of the fight at hand. For comparison, storytelling in pen & paper RPGs is entirely informed by the group’s collective reactions, and the experience can change dramatically depending on the participants. 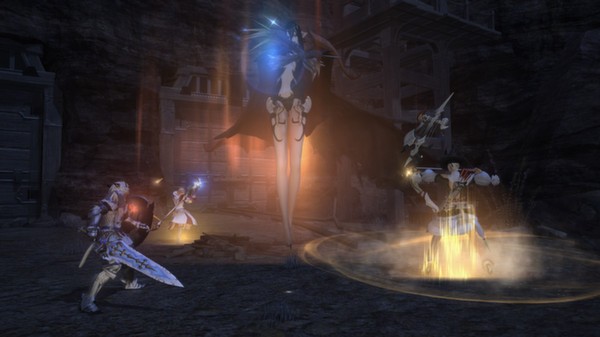 Reimagining storytelling to fit a multiplayer setting is a labyrinthine problem. One aspect, mentioned above, concerns player availability. Besides, most people don’t see narratives as something replayable, whereas players tend to accept and even enjoy repeating a gameplay section multiple times. Another issue arises from having to cater to two different kinds of players: one group prioritizing gameplay, efficiency, min-maxing, and grinding, and the other preferring to enjoy the story at their own pace and smell the flowers on the way. Historically, MMOs have appealed to the former more than the latter. Only recently games like Final Fantasy 14 and The Secret World have started altering this balance by trying to please both groups at the same time. It’s possible that a truly innovative narrative-focused MMO may have to make the risky choice of ignoring or minimizing its mechanical side, much like walking simulators and Telltale-style adventure games did. Not because a coherent whole is impossible, but a period of time in which the narrative systems are the exclusive focus of development can help the genre find new solutions and let them mature before implementing them into a more ambitious project.

MMOs are unique precisely in that they are able to bring together large numbers of people. That they do not know how to leverage this enormous resource when it comes to storytelling cannot be seen as anything other than a major failure. Doubly so when it’s a game like Final Fantasy 14 that obviously cares about its narrative more than almost any other. Its clumsy attempt at delivering crucial story moments during dungeon instances via cutscenes is more than its competitors have tried, but it still betrays a jarring lack of ideas for solving this problem. What is missing are the very tools for dealing with it, and the process of finding them may very well give birth to a new genre altogether.

Melody is passionate about games, words, and music, and she expresses her love by meowing. You can find her on her blog, and on Twitter.

Tags: Final Fantasy 14: A Realm Reborn, Skyrim, The Secret World, The Witcher, World of Warcraft
← The Mind of a Storyteller
Due Diligence: Putting the Pieces Back Together in Ether One →