Racing Line is born out of my frustration with the infrequency of serious writing on racing games. In this new column, I will explore various topics in this underexplored genre, digging deeper into the meanings and feelings found behind the virtual wheel.

Forza Horizon 2 offered an escape during the spring and summer of 2020, when such joys were badly needed. Its sunny, jubilant representation of a European road trip and music festival conveyed an irresistible nostalgia for better summers spent among crowds of strangers and loved ones. Forza Horizon 2, oddly enough, isn’t really about racing; it is a game that presents a particular vision of the world and a generation, serving as a dreamlike repository for escapist fantasy, one with great appeal during a time of isolation. A remarkable opening cutscene introduces the game like a guided meditation as a woman narrates in a breathy whisper, “open your eyes, listen closely to the sound of my voice.” What follows is a montage cut together almost exactly like a trailer for a Terrence Malick film, with gorgeous images of colored lights and slow-motion shots of bodies and vehicles in motion, interspersing cars racing through landscapes with youthful concertgoers twirling in the moonlight. Doubling down on its predecessor’s music festival backdrop, Forza Horizon 2 introduces itself as “a Playground Games event,” and in this framework, the game represents one of the more effective commentaries that a videogame has made about a generation of millennials, influencers, and wayward youth seeking meaningful experiences. Its clear focus on conveying a sense of sublime beauty and wonder reflects an aspirational, almost utopian quality curated for a generation likely unable to attain such a lifestyle amidst the shortcomings of real life.

“This is gonna be the summer of our lives,” a narrator announces after the opening cutscene, hyping up the titular Horizon Festival, a sprawling events space modeled after real-world locales like Coachella, Electric Daisy Carnival, Creamfields, Burning Man, or Bonnaroo. This prevailing, easygoing party atmosphere—soundtracked largely by upbeat electropop and summery EDM—reframes the racing game as sensory experience rather than high stakes competition. Like the Coachella Valley Music and Arts Festival, it’s not just about the music, but a feeling and a lifestyle, an opportunity to have a main character moment. Forza Horizon 2 produces this romanticized, escapist spectacle of leisure via its road trip structure. Set in a miniature of the French and Italian Riviera, the game is divided into a handful of rustic farm towns and coastal holiday cities separated by open countryside. Players select a town where they’ll compete in four championship races, and upon completion of those events, they must then embark on a scenic road trip to the next town, convoying (not racing) with dozens of non-player-character drivers through the rolling hills of wine country or the winding cliffside roads towering above the Mediterranean. This nomadic structure provides a constant sense of movement around the map, preventing players from lingering in one space for too long. Even the radio DJs frame the migration of racers as an adventure with friends, and a chance to soak in the sights and the curated summer music like a high-speed backpacking trip across Europe. These caravans across the map create a palpable sense of togetherness, effectively conveying the idea that players are part of a bigger festival and experience. 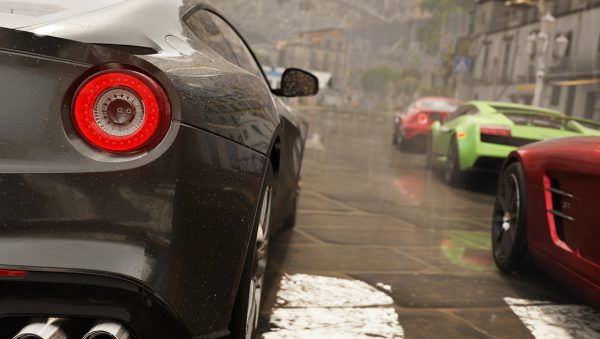 Forza Horizon 2 even frames its side challenges in terms of a vacation itinerary, naming those events with titles like “15 Things You Must Do This Summer.” Players complete objectives that take on the language of a bucket list, like “Escape to the country in a McLaren P1” or “Out run the sun in a Ferrari F40.” These moments highlight the series’ aspirational, glamorous treatment of the cars you race. Unlike games such as Gran Turismo, where players largely race in humble, unremarkable used cars until they’re successful enough to buy a decent sportscar, Horizon embraces indulgence, offering many opportunities to drive otherwise unattainable, rare supercars and constantly rewarding players with new vehicles. In the game’s fantasy vacation framework, cars serve as expressions of freedom, weightlessness, and mobility—pretty vessels to explore a picturesque landscape.

In addition, the handful of “showcase events” provide moments of scripted spectacle, akin to planned moments in a vacation like witnessing the Eiffel Tower light up after dark or catching the sunset over Santorini. These might find players cutting through farmland towards the sight of hot air balloons taking off in the distance, or barreling up a craggy coastline as a storm kicks up over the Mediterranean. What the game seeks to convey in such moments is a particular feeling of being centered, capturing experiences that feel glamorous, cinematic, and romanticized. Unconcerned with competition, many events emphasize driving rather than winning: “Finish in the top 3” or “Drive the Huracán to the festival!” the game excitedly commands players. In this sense, Forza Horizon 2 resembles the sunnier flipside to the nocturnal 2015 Need for Speed, another game that deemphasizes competition in favor of simply cruising with friends, capturing the feeling of youthful freedom. 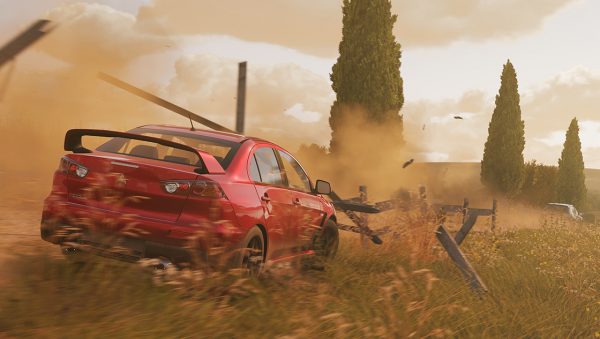 Of course, Forza Horizon 2’s vision of a summer in the Riviera amounts to a fantasy. The series’ fixation on national parks and world heritage sites conflicts with the frenzy of racecars that would congest, pollute, and destroy the natural idyll these remote destinations represent. Its depiction of young twenty- and thirty-something millennials enjoying the Mediterranean sun in classic Ferraris has no basis in reality, when generally, these kinds of car meets attract older clientele who have the money and connections to lead this kind of luxury lifestyle. The trend to romanticize one’s life, by curating carefully composed Instagram stories or filming aestheticized TikToks set to wistful music, emerges from the sobering context that millennials and Generation Z yearn for exciting life experiences amidst a time of great precarity. Within the past few years, there seems a recognition that older generations have decimated hopes for an economically and environmentally stable future. The ongoing worldwide pandemic has largely deprived a generation now coming of age from venturing out into the world at a crucial moment in their social lives and enjoying the kind of globetrotting, privileged leisure perpetuated by images on film and television. Thus, the desire to craft a romanticized main character moment, to construct a vibe™ on social media attempts to reclaim agency lost amidst global calamity and economic crisis, in order to salvage the present. Forza Horizon 2 understands this generational desire for fantasy. It depicts images of cars and people in nature, of youth lounging, picnicking, and enjoying a life like a vacation advertisement. Its imagery is hollow yet authentic to our aspirations, personal yet performative in the ways it feels constructed. Its world does not reflect reality, but a dream life.

During the harsh summer of 2020, I looked outside my window into a California tinted a smoky orange-brown from the wildfires raging across the state, engulfing the world in a hellish inferno. The Forza Horizon series imagines a world where skies remain forever blue and the fields of lavender and wheat uprooted by speeding cars are magically restored to pristine condition after every race. In a comedic review of Forza Horizon 4 for Kotaku, the reviewer alludes to an idea by Gran Turismo series director Kazunori Yamauchi. The idea is that the development team no longer endeavored towards the graphical approximation of reality, as he believes that technology has already achieved this feat. Instead, Yamauchi turned attention to creating “a more beautiful reality” than the one in which we currently live. This is a sentiment shared in the opening cutscene of Forza Horizon 2 when the narrator beckons players to “cross into a larger, more colorful world.” Rendering the world faithfully would remind us of the apocalyptic problems of our shared reality. Forza Horizon 2 invites us, in its opening meditation, to imagine and cross over into a dream world, a fantasy. And for a brief time, we lived in that world, in a more beautiful reality.