Eric Cline dreams of daddies and happily ever afters.

As a gamer who specifically loves dating sims, I’ve often found my favorite titles lack critical coverage or mainstream acknowledgement. In Let’s Play a Love Game I will discuss narrative, aesthetics, gameplay mechanics, and various other aspects of dating sims in an effort to give the genre its due.

When Dream Daddy came out almost five years ago, I was cautiously interested. The concept initially set off alarms as it sounded like prime gay joke material: dads…dating…other dads?! But reviews were largely positive and consistently highlighted the game’s sincerity so I decided to give it a try. What I got wasn’t a gay joke but a gay game with jokes, in which a single father does his best to raise his daughter Amanda properly while also finding romantic connection with other dads around town. Within twenty minutes of starting I was already enamored with my father of choice: Joseph Christiansen, a married youth pastor.

How did I get started down the road to adultery? Upon my moving to Maple Bay, Joseph showed up at my doorstep to welcome me to the neighborhood. He arrived with free cookies, tight clothes showing off his best assets, and a perpetually charming smile. After fumbling his introduction by accidentally mentioning my dead spouse, he then shut the front door on himself and reopened it to start over with more smiles and a promise not to do anything awkward like mentioning said dead spouse. 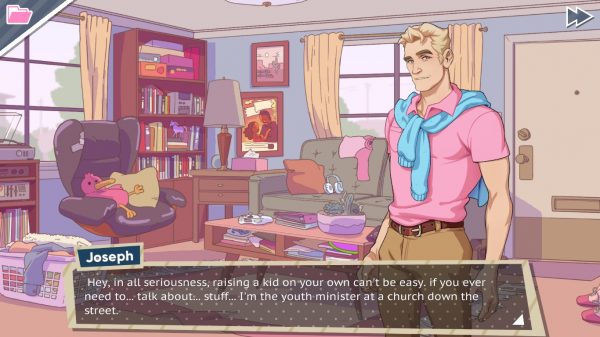 Joseph didn’t hide his marriage or parental status from me but was rather up-front about it. Still, there was already undeniable chemistry between us. The way Dream Daddy navigates the tension between expectations and desires is grade A material. Even if Joseph weren’t immediately so charming, his presence in all the game’s promotional art would clue one into the fact that he’s a romance candidate. The expectations of the genre (that the bachelor characters are in fact romantically pursuable) therefore clash with societal expectations about proper etiquette with married people (i.e. not fucking them if you already know they’re spoken for).

Part of what makes Joseph’s arc work is the slow pace at which it builds. The first two of his three dates aren’t actually dates at all. After his introduction, my next opportunity to spend time with Joseph came when he invited me to prepare for a bake sale with him and his kids. This was my first time entering Joseph’s house and my first look at all the physical signifiers of his faith and fatherhood, such as the Bible 4 Teenz, cloth dolls that have been played with to the point of tattering, and what look like Jenga tiles scattered across the floor.

This scene highlights all of Joseph’s most appealing attributes. He’s a caring father, clearly devoted to his children’s wellbeing. Though the kids misbehave a bit while the player character is visiting, Joseph shows equal parts patience and affection in his interactions with them. He also shows off his sense of humor, reminding the player that he’s not just a youth pastor, he’s a cool youth pastor. Regardless of whether the player or their self-insert shares Joseph’s religious leanings, it’s still easy to like how friendly and committed he is. The charm is already working even if he has yet to make any clear moves.

One long baking session later, Joseph takes the player character to the bake sale itself where the pair run into Joseph’s wife Mary. It’s here that the prospect of an affair becomes a true possibility. Joseph and Mary are clearly a very unhappy couple, with Mary being the less restrained of the two with regards to acknowledging said misery in public. The framing of these scenes very specifically paints Joseph in a more positive light. He stops short of expressing outright anger, polishing his reactions with a veneer of acceptability in a futile attempt to hide the true extent of his pain. At the end of the night he even apologizes to the player for their having witnessed such tension.

Is Joseph attractive? Check. Is he kind and funny? Check. Does he seem like a good father? Check. Does he handle even strenuous personal conflicts with grace? Check…at least, within the sliver of context we’re privy to as the player. Joseph seems like he would be ideal boyfriend material if he weren’t already married, and with it clear that his marriage is on the rocks it becomes easier to imagine dating him without shame.

This sense of desire becoming more aligned with moral leeway continues in the next date. After spending some time together chaperoning a youth dance at the church (once again reinforcing Joseph’s leadership role in the community), Joseph leads the player character to his private office. He’s strewn lights up, prepared drinks, brought in beach chairs, and even set ambient music playing softly. It’s the realization of Joseph’s ideal: The Margarita Zone, an oasis from his strained marriage and community commitments where he can just let loose. And you, his good friend, are welcome there with him. 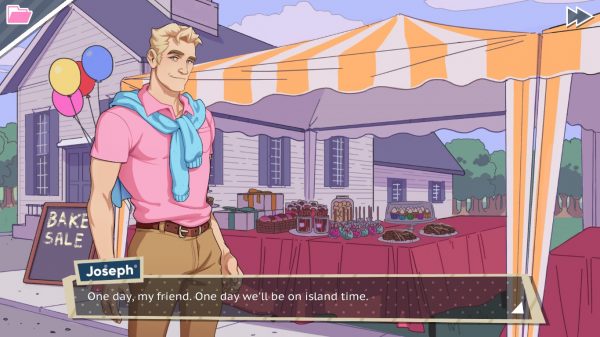 The scene is as romantic as it is dorky. Once again, Joseph’s status as a responsible member of the community helps ward off concerns that he might be using you, even as warning signs have been multiplying all around you. You’ve yet to experience physical intimacy with Joseph, but it still doesn’t feel outrageous when Mary alludes to you having a non-platonic relationship with her husband.

After all, don’t you want to? He’s always been so kind to you, and surely such a charming, hardworking man must deserve romantic satisfaction even if it’s not found with his wife. The game always presents Joseph in the best light and Mary in the worst, as a literal object in the way of your romance. The dynamic is troubling upon reflection, but the game doesn’t shadow the player’s desire with layers of disapproval. It leads you on as Joseph does, never shaming you for your building desires and even rewarding them with effectively paced serotonin hit after serotonin hit.

Enter date number three: the dream come true. Joseph invites you to go out on the ocean with him aboard his yacht. There’s no Mary, no children to supervise, no one at all for potentially literal miles. Conveniently the yacht runs out of fuel (or so Joseph says), and you’re left alone together until help can arrive. But with wine and no one around to interrupt or overhear you, is that such a bad thing?

It seems like an opportunity to finally take the next step, and indeed you do. Joseph tells you that he and Mary are separating, and at last you can put what little worry you had about adultery out of your mind. Sure, you had feelings before but you never acted on them, and why shouldn’t you now? After more flirting amplified by Joseph’s trademark wit, you end up having gay sex on a yacht in the middle of the ocean and wake up the next day to marvel at the sight of Joseph’s skin glinting in the sunlight. Talk about a good end, right?

Alas, choosing to fuck the preacher man doesn’t actually result in a happy ever after. You see him next at Amanda’s high school graduation party where he pulls you aside to inform you that he’s sorry but he and Mary have reconciled, and he needs to do right by his family. He never blames you but he also leaves no room for doubt in a classic “It’s not you, it’s me” speech before leaving you alone to have your closing scene with Amanda. 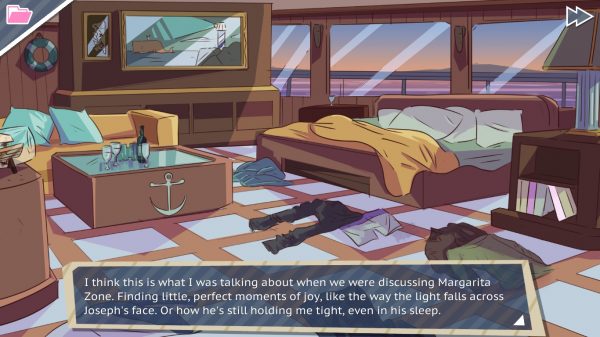 How could this have happened? Didn’t you share a moment together in the Margarita Zone of his private office? Didn’t you reach true paradise getting your back blown out on his yacht? Wasn’t he so caring that even if his personal relationships were crumbling, it couldn’t possibly be his fault? This is a dating sim, damn it, weren’t you supposed to live happily ever after?!

When I first played Joseph’s route all the way through, I was displeased. Yes, the telltale signs were always there. Yes, I was accomplice to adultery. But he was my dream daddy, and this ending wasn’t what I sought in booting up the game. I expected a feel-good experience where my bachelor of choice and I would gleefully kiss and live out romcom tropes. Such is the case with most of the other characters, i.e. sharing a sleeping bag on a camping trip with Craig or assuring Damien that I love him with or without his dedicated Hot Topic Victorian wardrobe.

Now, having long had enough time to confront my sense of disappointment in the Joseph route and to replay it with the ending in mind, I appreciate the curveball Dream Daddy throws. While I wanted a storybook ending to my time with Joseph, what I got was more nuanced and better written. This is a game about finding love, but love can be painful. It can involve making bad decisions, getting involved with people who will never be your life partner, and walking away indignant that you never achieved a happiness that wasn’t yours to have.

Poignant as this realization is on its own, it’s the game’s consistent sense of empathy that makes the truth much easier to swallow. While some characters make reference to the questionable nature of your decisions, there’s never any sense of authorial disapproval. On one hand, it’s a matter of honesty. The game placed you in this situation, so it would hardly be fair to then chastise you for (literally) playing your assigned part. Married or not, Joseph was a charmer and offered some momentary happiness. Regardless of if he’s a serial manipulator, it’s hard to believe that there wasn’t some nugget of sincerity in the feelings he expressed to you throughout your time together.

Perhaps most importantly, your life doesn’t lose all its pleasures when Joseph leaves. There’s still the final scene with Amanda in which you bond as father and daughter and the importance of that relationship clearly outweighs any romantic dejection you might be feeling. All the other dads in the neighborhood remain your friends as well, and, as each character says his goodbye line, it’s with a warm tone of friendship, never one of malice. There is no mouthpiece character to belittle your intelligence for loving a married man, or for believing him when he (whether truthfully or not) told you the marriage was over. There is no sense of karmic inevitability. If the ending was always pre-ordained, it was due to Joseph’s self-imposed bounds, not your being intrinsically immoral.

It’s this sense of acceptance that makes Joseph’s ending feel congruent with the rest of the game’s routes, even if it has the least promise for continued romance in the future. As you bond with all the bachelors and grow closer amidst shared struggles with fatherhood, there’s an acceptance of yourselves as you are. Such is the case with Joseph’s route, where to love is not necessarily to be loved back or to think and act with sharp judgment. It is, however, to acknowledge complicated feelings for what they are, and to move forward even in rejection with the knowledge that you still have more love to give.